DC Comics’ radical new graphic novel Gotham High throws the world of Batman into the teen-drama-drenched pages of a Riverdale-style reinvention. Melissa de la Cruz and Thomas Pitili teamed up for the new DC original graphic novel that reimagines the high school years of some of Gotham’s most famous inhabitants. The super cool comic feels like a descendent of classic teen shows like Dawson’s Creek, My So Called Life, and even a little Skins, whilst still reading as a totally new take on the superhero genre.

To celebrate the release of Gotham High, we got the rundown of the titular institution, its students, and some of the secrets hidden in the pages of this rad new take on DC Comics most famous city.

When it came to designing the world of Bruce Wayne, de la Cruz and Pitili looked to both the real world and the fictional to shape their new vision of Batman. For de la Cruz, it was all about bringing an authentic quality to the opulent wealth of the Wayne’s that came from an unexpected place. Pitili took the chance to weave in Easter eggs about Bruce’s future as well as living out a childhood dream in his gorgeous renderings of Wayne Manor. 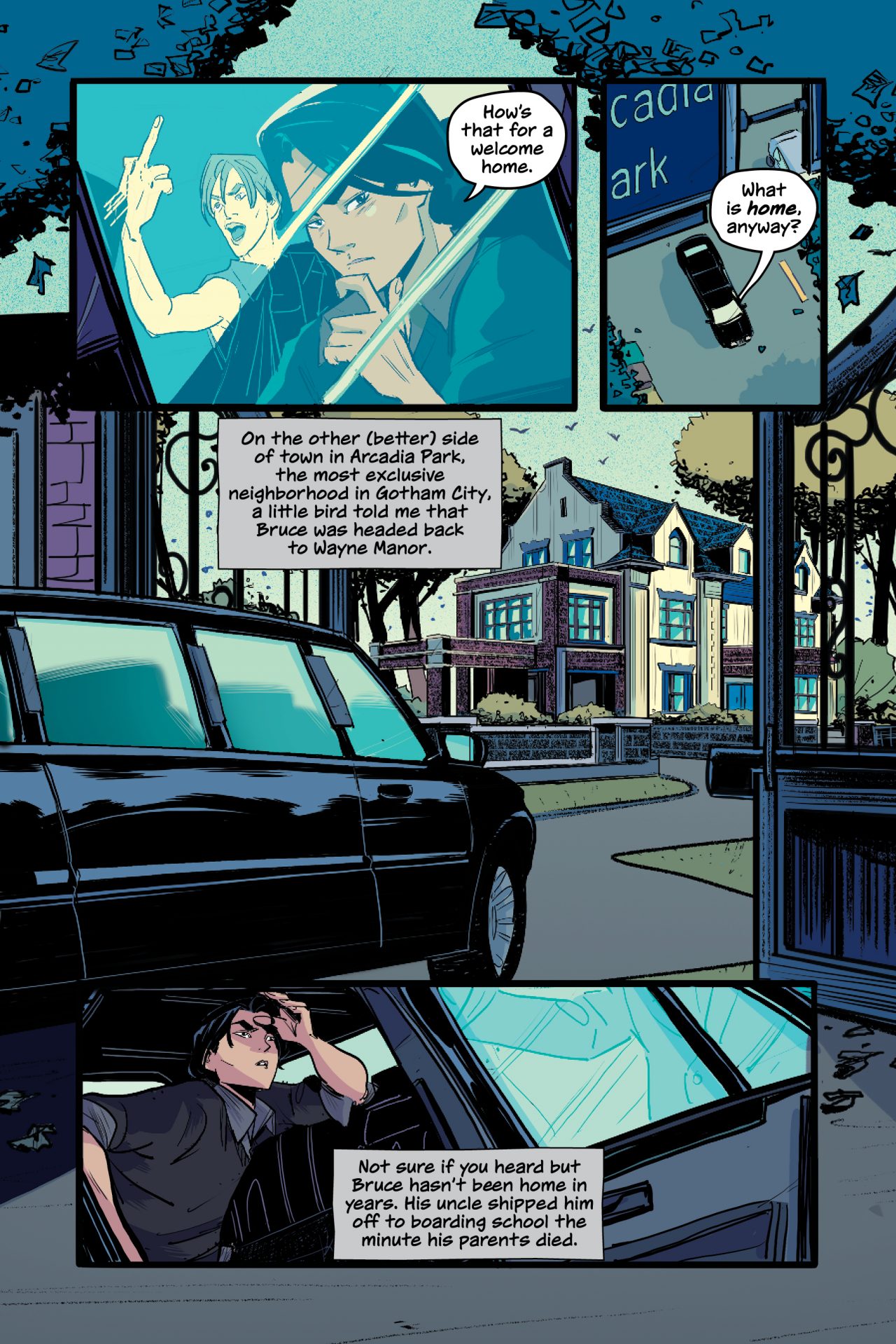 Here de la Cruz breaks down the real life inspirations that influenced the Wayne’s home which we can see in the page above.

“Arcadia Park, where Bruce lives, is based on Arcadia, California, which has been called ‘Asian Beverly Hills’ and mansions can run to a high of 26 million. Many rich Chinese people from Hong Kong moved there after Hong Kong stopped being a British colony. My family lives in the Pasadena/Arcadia border, so I am very familiar with Arcadia. I wanted Bruce Wayne to have a little part of my life. In the book, he eats xia long bao—soup dumplings—which can be found in Din Tai Fung in Arcadia.” 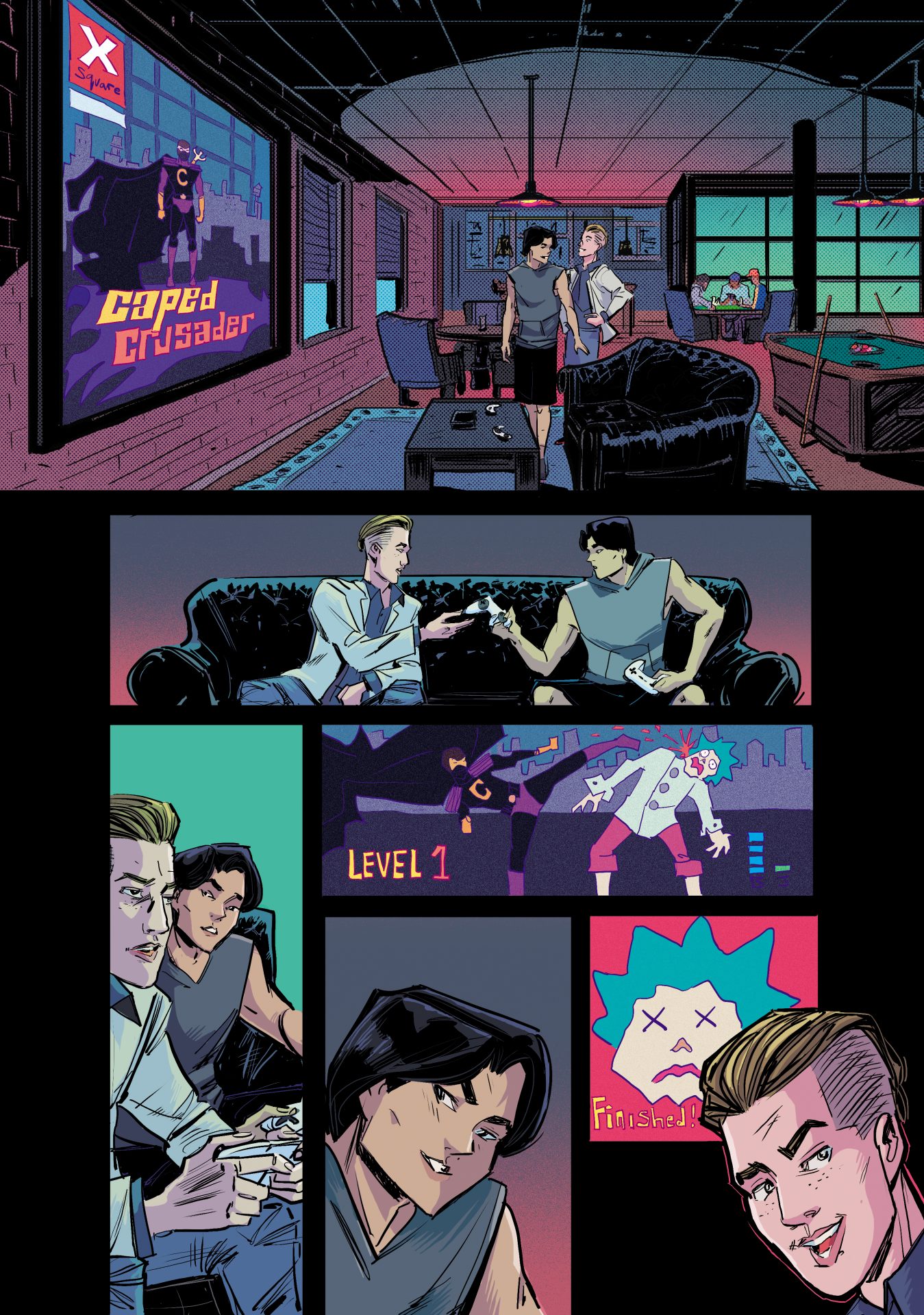 Pitili offered a little insight into some of the easter eggs he snuck in, a couple of which you can see in the awesome page above. “I tried to interject wherever possible little clues that eluded to Bruce Wayne’s inevitable alter-ego,” he said. “So at one point Bruce and Jack are playing a video game called ‘Caped Crusader’ and in the background of Bruce’s childhood bedroom, I threw a Sherlock Holmes poster on the wall to foreshadow his great detective skills.” 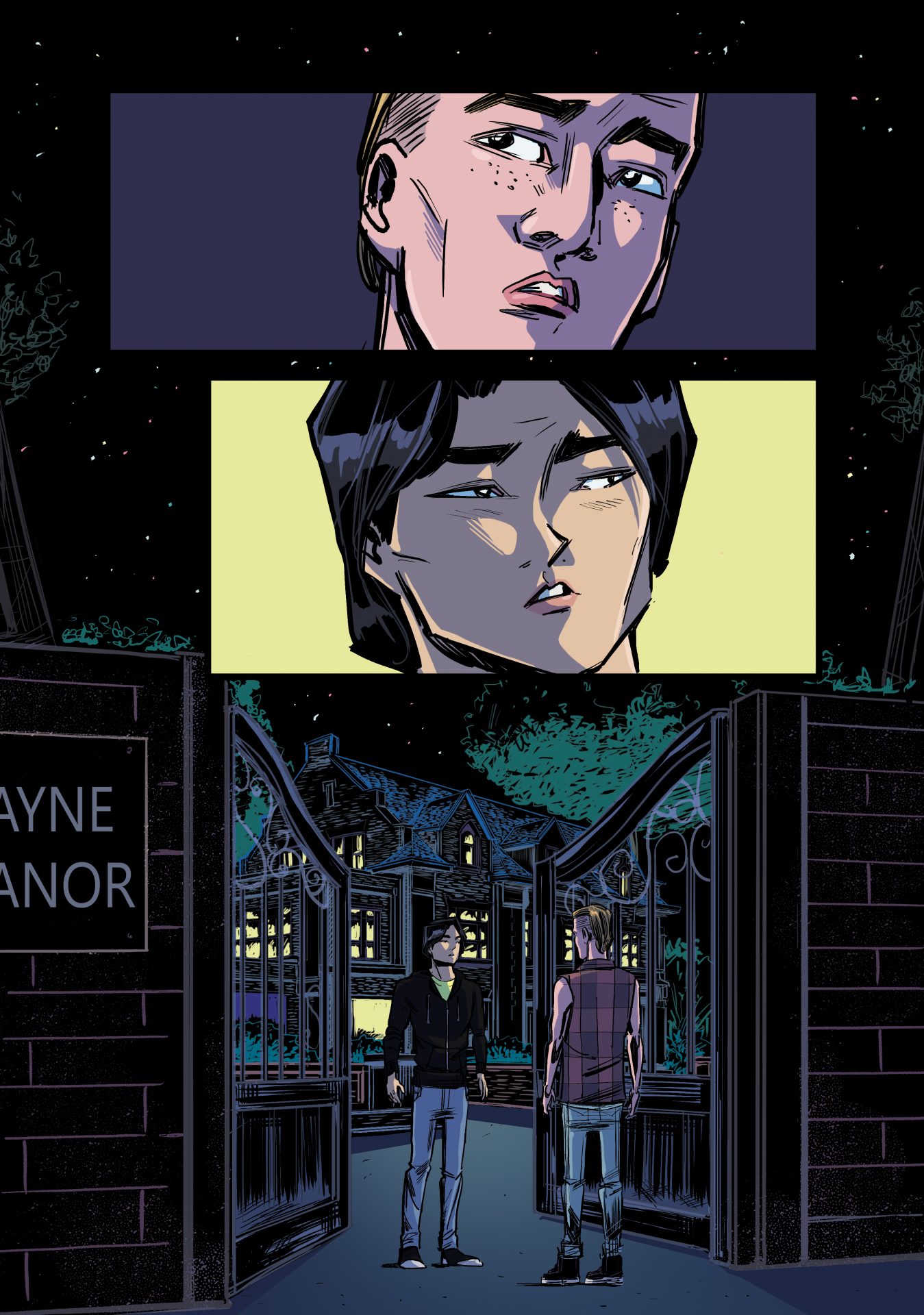 Pitili also shared his thoughts on designing Wayne Manor and how his Batman fandom as a kid shaped his vision. You can get a glimpse of the impressive mansion above. “When I was a kid, I used to wish I could live in a mansion like Bruce Wayne did, so getting to design what Wayne Manor looked like in this graphic novel was a way for me to revisit that childhood dream.”

Catwoman is one of Batman’s most iconic foes and allies, so when it came to making her the key to their new Gotham, de la Cruz looked to glamorous women of the past. The best-selling writer of Witches of the East End also revealed that Selina wasn’t always going to be the voice of Gotham High! 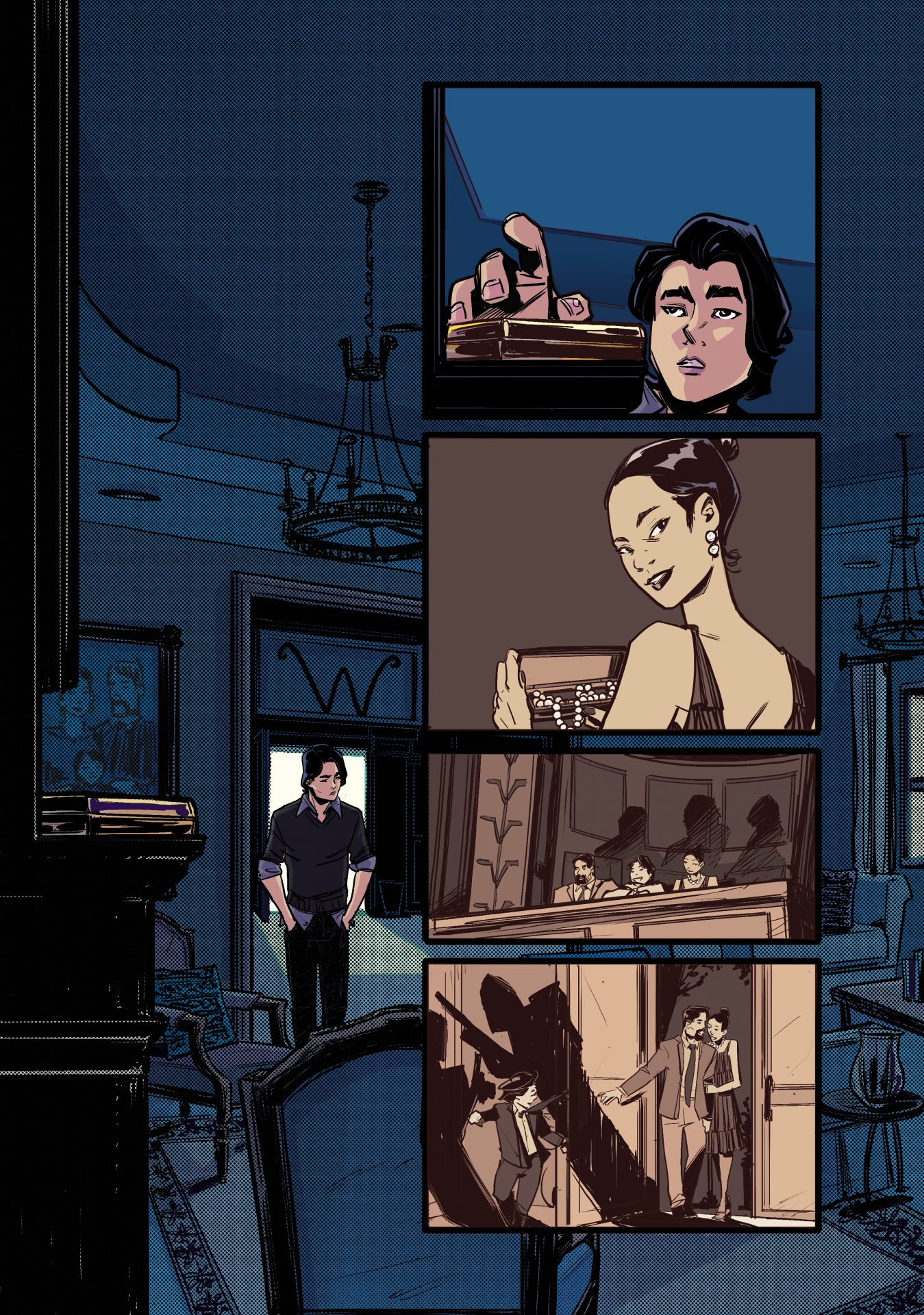 Another interesting reveal came from de la Cruz’s breakdown of the gorgeous page above which gives readers an insight into the new lineage of Bruce Wayne. “I originally gave Bruce’s mom the name Cecilia Dean, inspired by model and magazine editor the beautiful Cecilia Dean,” she explained. “Then I changed her name to Ma-sha Dean because Bruce Wayne’s mom is always named Martha Wayne.” 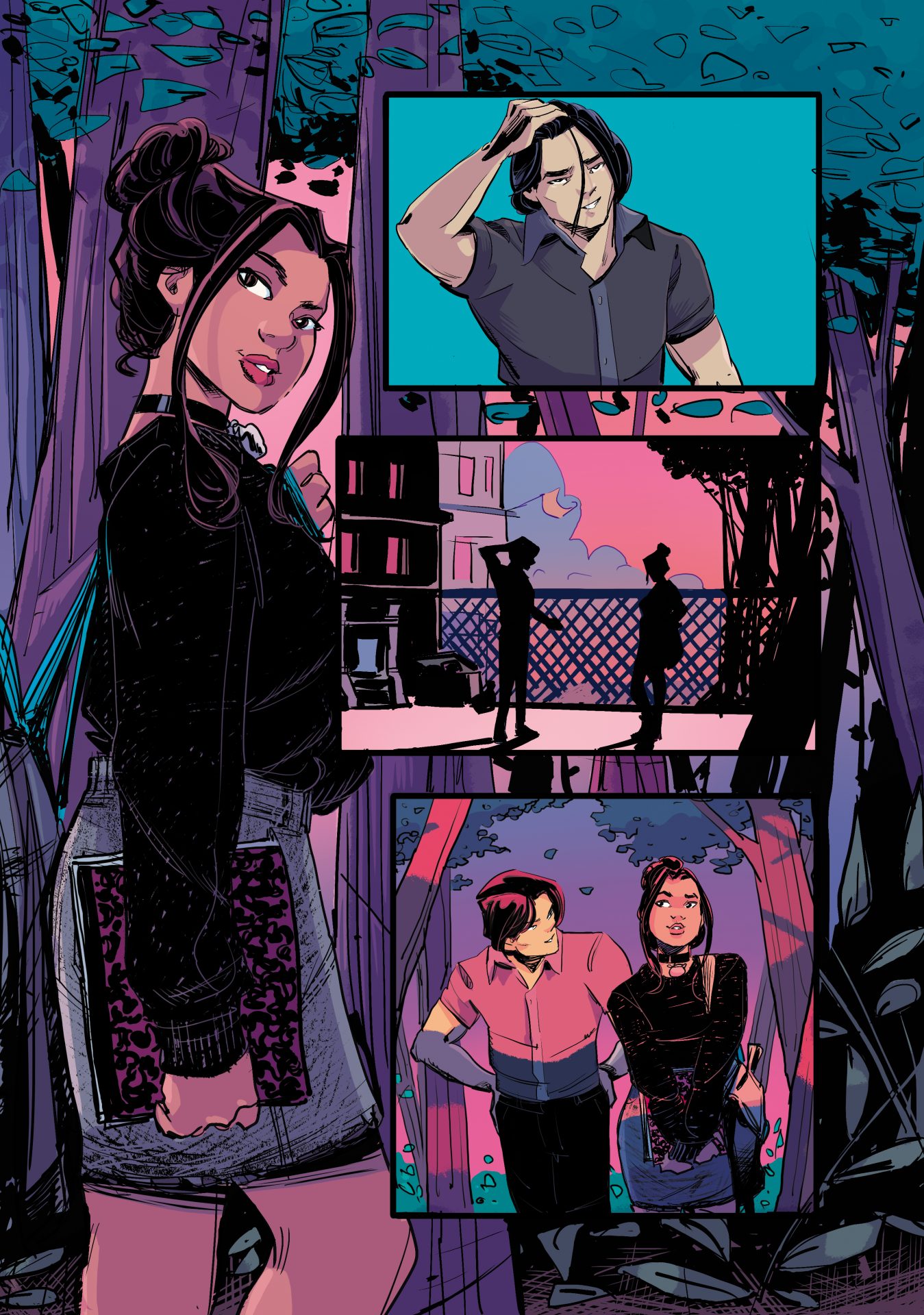 As we can see in the above page, Selina is a force of nature, something de la Cruz said came to her organically as she plotted and wrote the story. “Selina was not the original narrator of the book, it started out as a ‘Bruce’ book but Selina is so crafty she figured out how to make the book all about her,” she said. “In my script I wrote: ‘Selina is the sexiest girl ever to walk the halls of Gotham High.’ She’s gorgeous and she knows it and will use it to win.”

The titular institution was a huge influence in shaping where the story eventually went, with de la Cruz and Pitili sharing their thoughts on the locations and literature that influenced the school, its students, and the story. 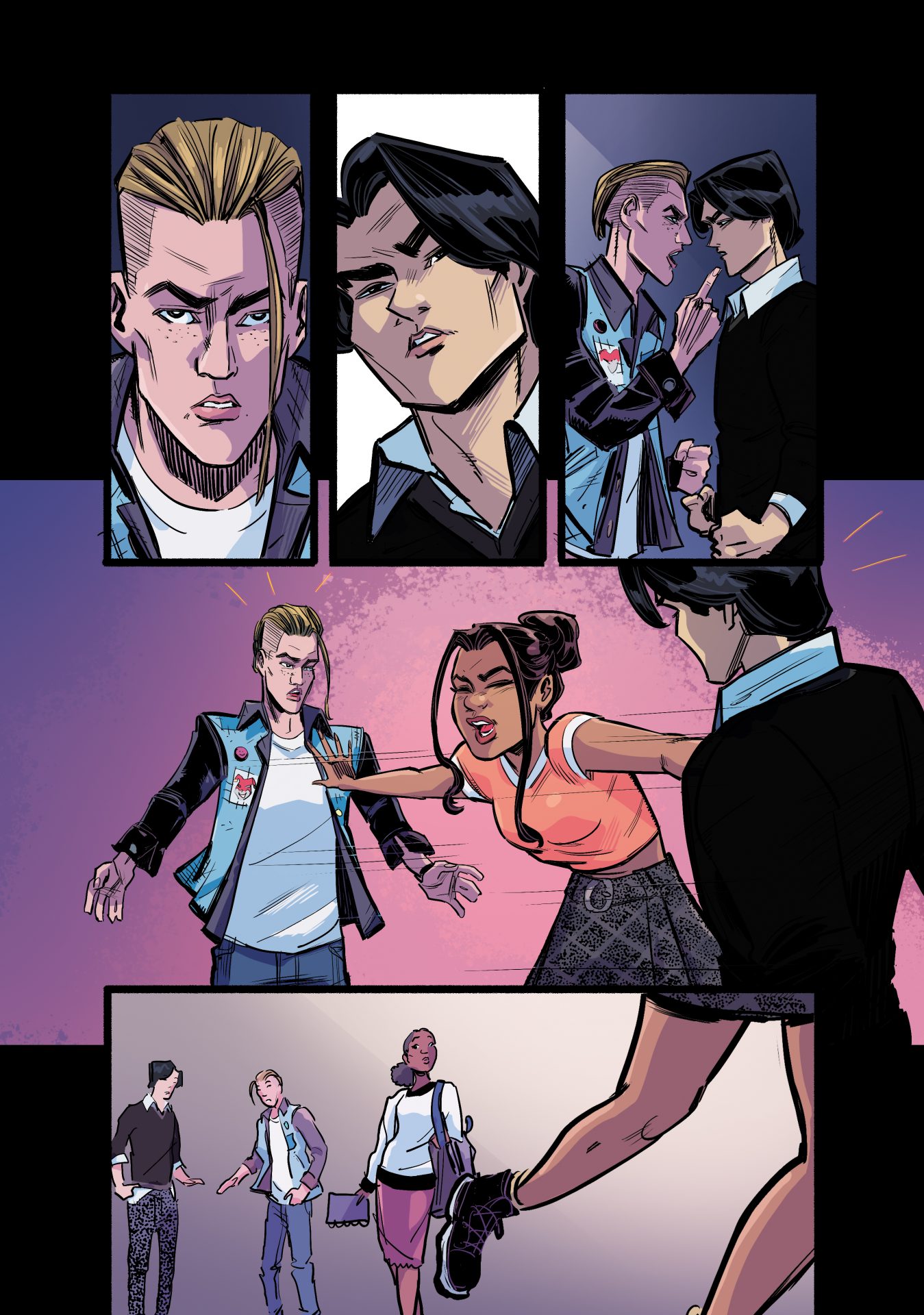 de la Cruz also shared how an iconic novel inspired the story and the page above.

“Truman Capote was a big influence on Gotham High. I was always fascinated by how Truman said that the antagonist of his book In Cold Blood—Perry Smith—reminded him of himself, that they had the same background, the same childhood even, but ‘I walked out the front door and he walked out the back door.’ As in Truman became a famous and celebrated author, while Perry became a cold-blooded murder. So in a way, Bruce vs Jack was my take on that—that they are almost the same person, but they have different obstacles in life and different reactions to what happens to them. Bruce grows up to be a hero (he walked out the front door) but Jack becomes a villain (the back door).” 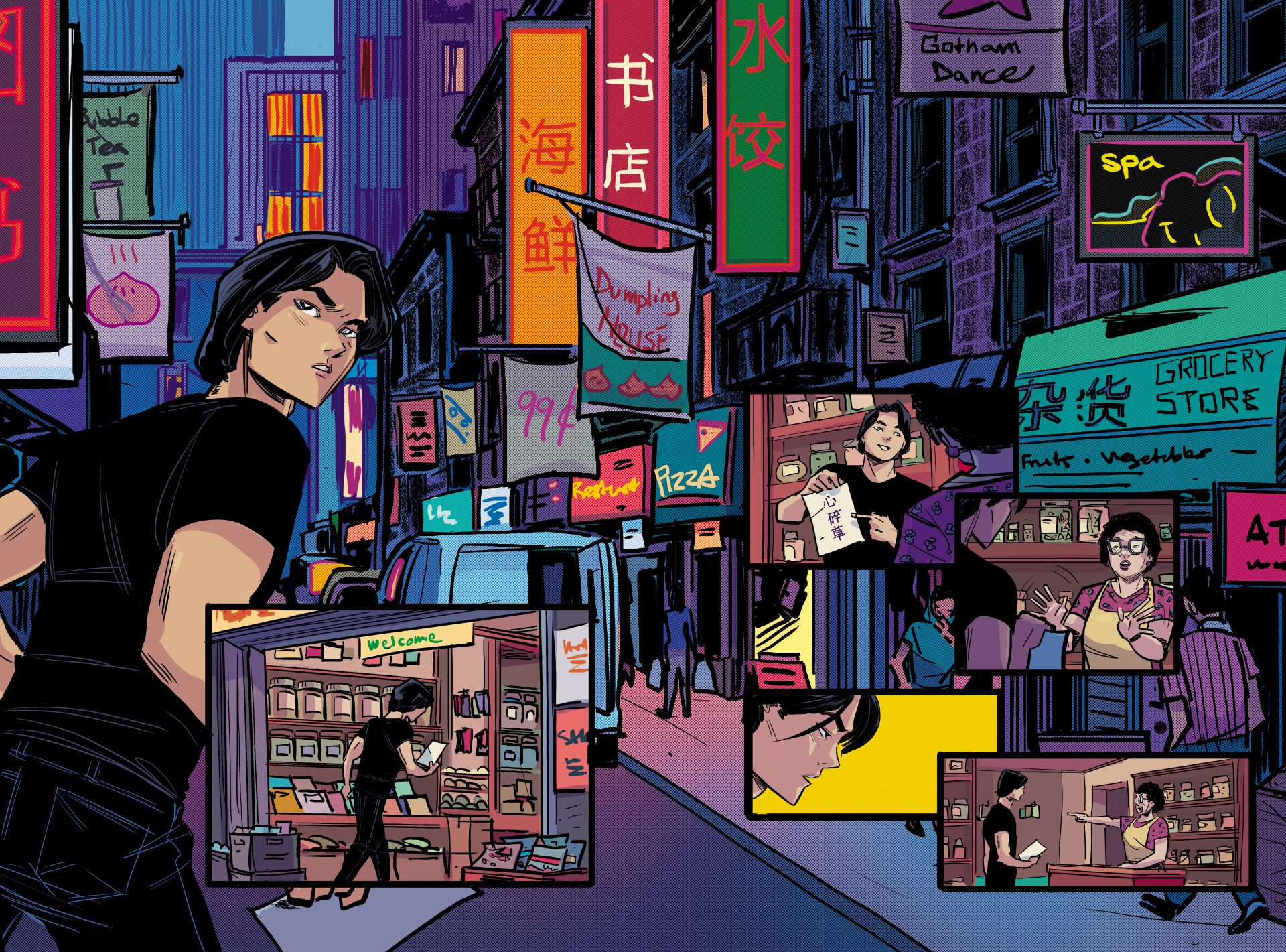 Like any great artist, Pitili brought a sense of himself and his own life to the art of Gotham as is showcased in the page above. “It’s no surprise that Gotham City is very much based on New York City and being a native NYer, I had a lot of fun drawing the city that I grew up in into the background of the city scenes,” he said. “Definitely made it relatable for me!”

The writer/artist team also shared some of their favorite moments and even a little humorous insight into their creative process! 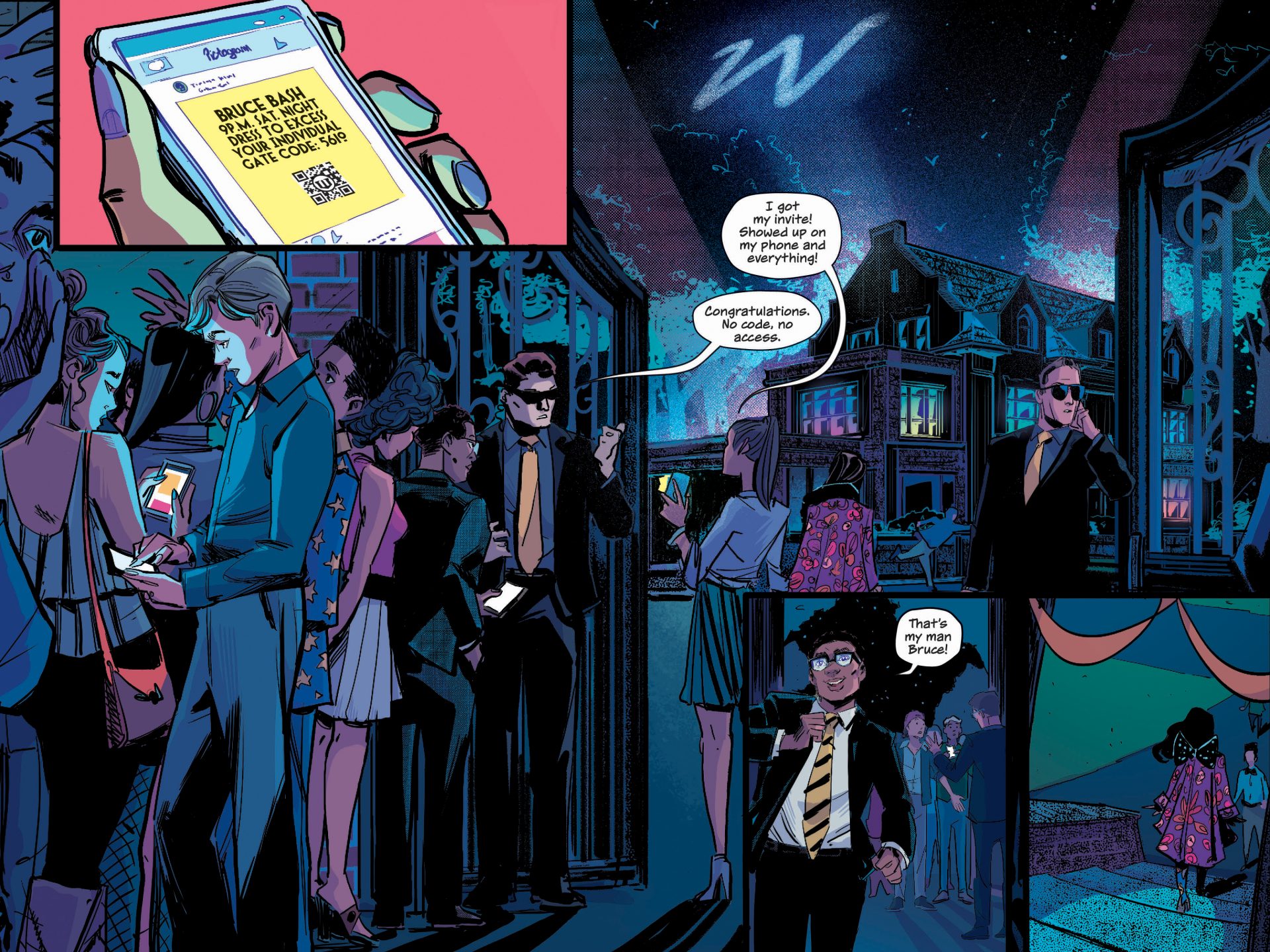 You can see de la Cruz’s favorite page above, the writer also shared why she loved it so much. “My favorite scene is the party scene—the ‘Bruce Bash’—and the Instagram invitations were a detail learned from my nephew who is in high school. He said that people post party details online, but you have to be ‘accepted’ as a follower to find out where the party is. Oh, life in Los Angeles… or Gotham!” 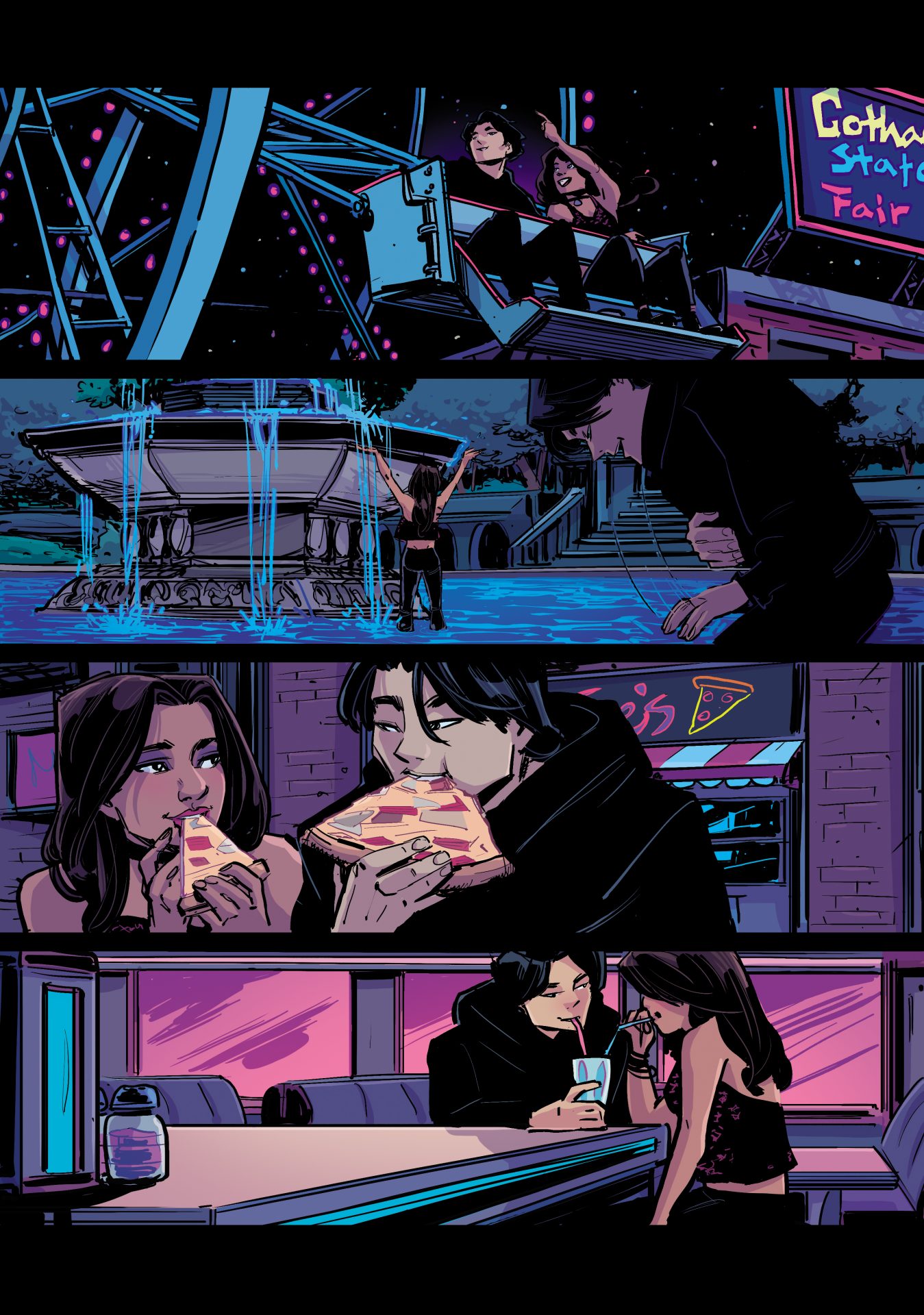 Pitili’s romantic side came out when it came to the page he enjoyed drawing most, which can be seen above. “My favorite page/scene in the whole book is actually Bruce and Selina’s date scene. I loved drawing the various locations around Gotham City that they visited. And I can’t lie, I also love drawing romantic scenes!” 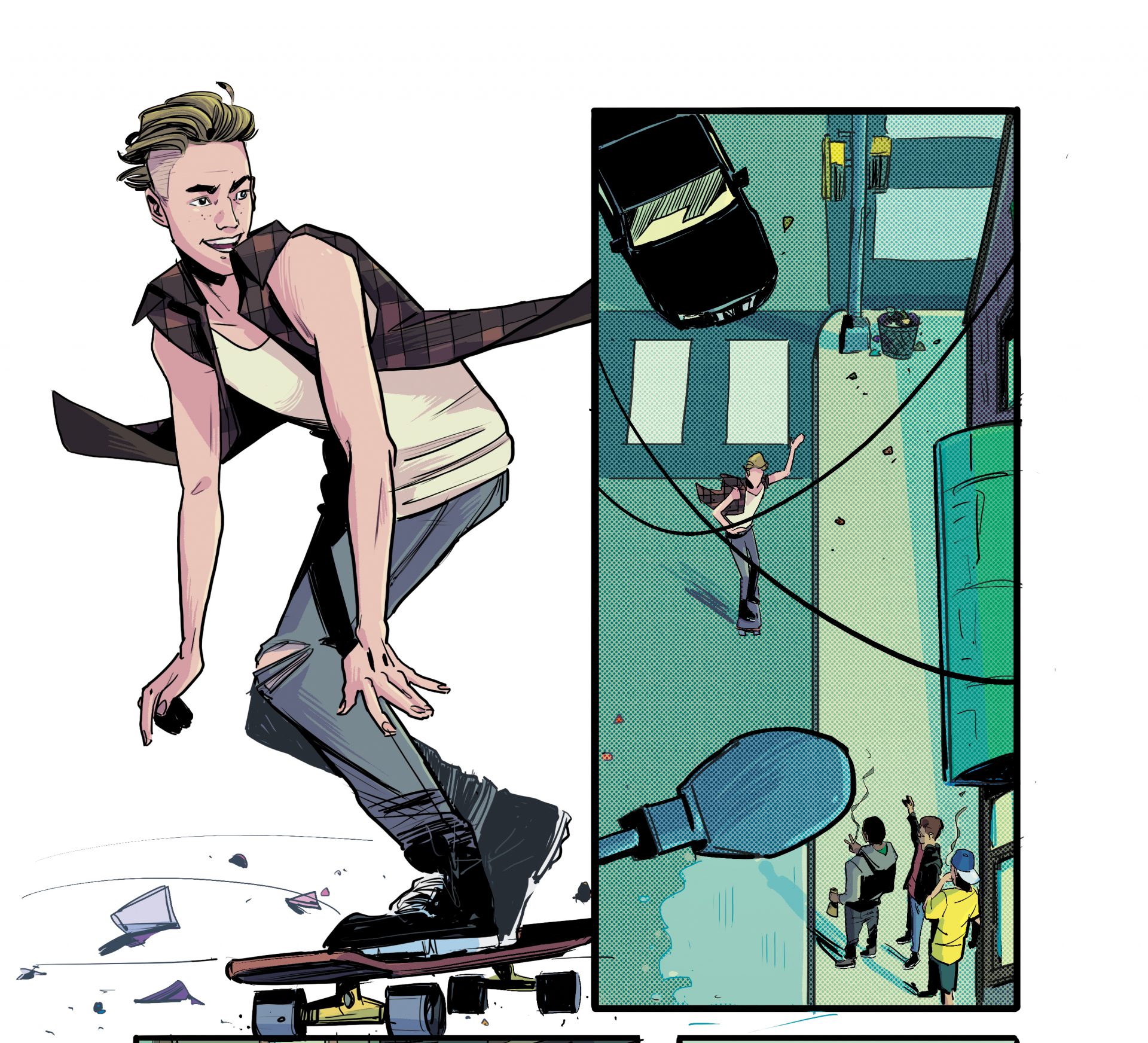 Finally, Pitili shared a really awesome and funny tidbit that makes the rad page above even better. “Jack’s hairstyle and attire (the cut off flannel shirt and tank top underneath) was what I wore for most of the time I was working on the book. I call it ‘method drawing.'”

Gotham High is out from DC Comics now!