It’s taken Microsoft a little while to adapt to the independent gaming world, but it’s doing pretty well for itself with its [email protected] program, attracting such titles as the hit party game #IDARB and the strategy/stealth game The Escapists. But next year, Studio MDHR will release a true game-changer for the program with Cuphead.

This run-and-gun platformer carries over inspiration from older titles in the genre, including Gunstar Heroes and Mega Man. Rather than just put soldiers through their routine paces, the game takes a much more lavish approach in the art department – it’s inspired by the 1930’s cartoons of old, like Steamboat Willie and older Popeye shorts.

The main hero of the game, Cuphead, lives up to his name, running around with a Mickey Mouse-esque body and a head that has a huge straw sticking out of it. He finds himself in a real jam when he makes a bet with the Devil – which he ends up losing – and literally has to face Hell while he tries to clear his debt. This includes running into a variety of enemies, from a giant cuckoo clock wearing bird that spits out eggs to a giant sunflower that tries to crush Cuphead with its pollen. 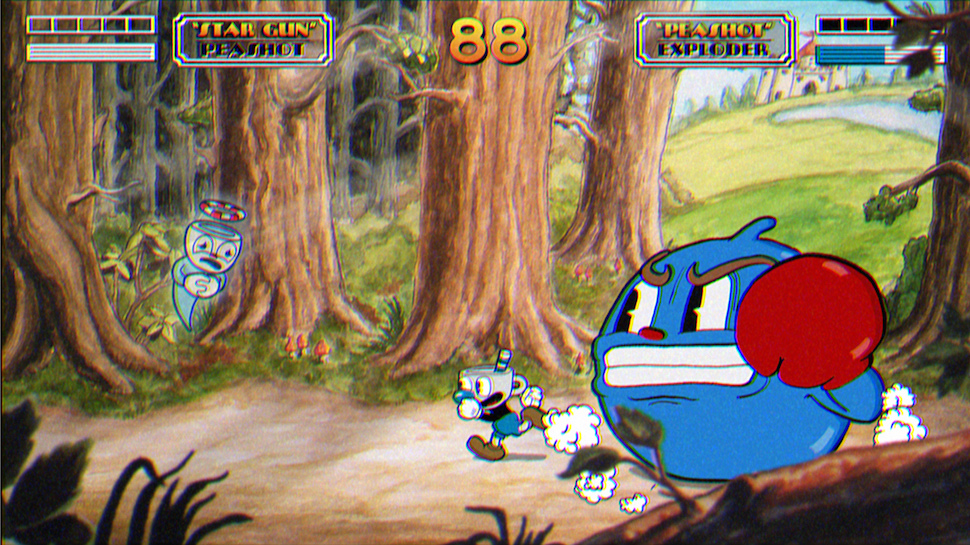 As you can see from the screenshots, Cuphead‘s art style is incredibly inspired, but that’s just part of what the game has to deliver. The developers, brothers Chad and Jared Moldenhaur, have also included the kind of old-school gameplay that players were used to back on the NES and Sega Genesis. The combination of run-and-gun and platforming tactics will be familiar to players who grew up on the Mega Man/Gunstar games, and the boss battles prove to be quite challenging by forcing you to learn a pattern and strike back or end up perishing as a result.

Cuphead also contains a fun two-player mode where a second player can jump in – taking the role of Cuphead’s buddy Mugman – as they do battle with continuous waves of bosses. Those of you who grew up fighting together in Contra games should appreciate what this mode has to offer, especially with the more challenging foes that lie in wait.

Along with its exquisite art style, the Moldenhaur brothers also incorporated some other effects to hammer home Cuphead‘s 30’s feel. This includes adding film graininess to certain scenes to embellish the visual quality, as well as providing a soundtrack and sound effects taken straight from the era. The end result resembles a much older product, but delivers a fun new experience that fans of shooters and platforming will appreciate.

We’re still a ways off from Cuphead‘s release – it isn’t due to hit the Xbox One until next year – but it’s a very promising title for the [email protected] program and will hopefully prove that independent developers can do something just as spectacular as AAA fare. Plus, “old-schoolers” will appreciate both its presentation and gameplay, even with the more difficult challenge.

Check out the trailer below, and let Cuphead‘s greatness runneth over.