Read an Excerpt from the Upcoming CRUELLA Tie-In Novel - Nerdist

Read an Excerpt from the Upcoming CRUELLA Tie-In Novel

Disney’s live-action Cruella will sweep into theaters in May. But if you absolutely cannot wait to learn more about the villain we first met in 101 Dalmatians, we have good news: you don’t have to. Cruella De Vil stars in a novel that ties into the upcoming film: Hello, Cruel Heart by Maureen Johnson. Well, technically it’s Estella starring in the novel. She’s the girl that existed before she transforms into the Cruella we know. Or at least, the Cruella Emma Stone portrays.

Even at 16 years old, Estella wants to become a fashion designer—just like we’ve seen in the trailers for Cruella. The YA novel takes place in 1967. Estella’s running wild with amateur thieves Jasper and Horace. The duo serves as her best pals, her found family, and her partners-in-crime. The intrepid teen takes on the task of making costumes and disguises for their heists. But then Estella has a chance to make her dreams come true… is it worth it though? Always a tough question. 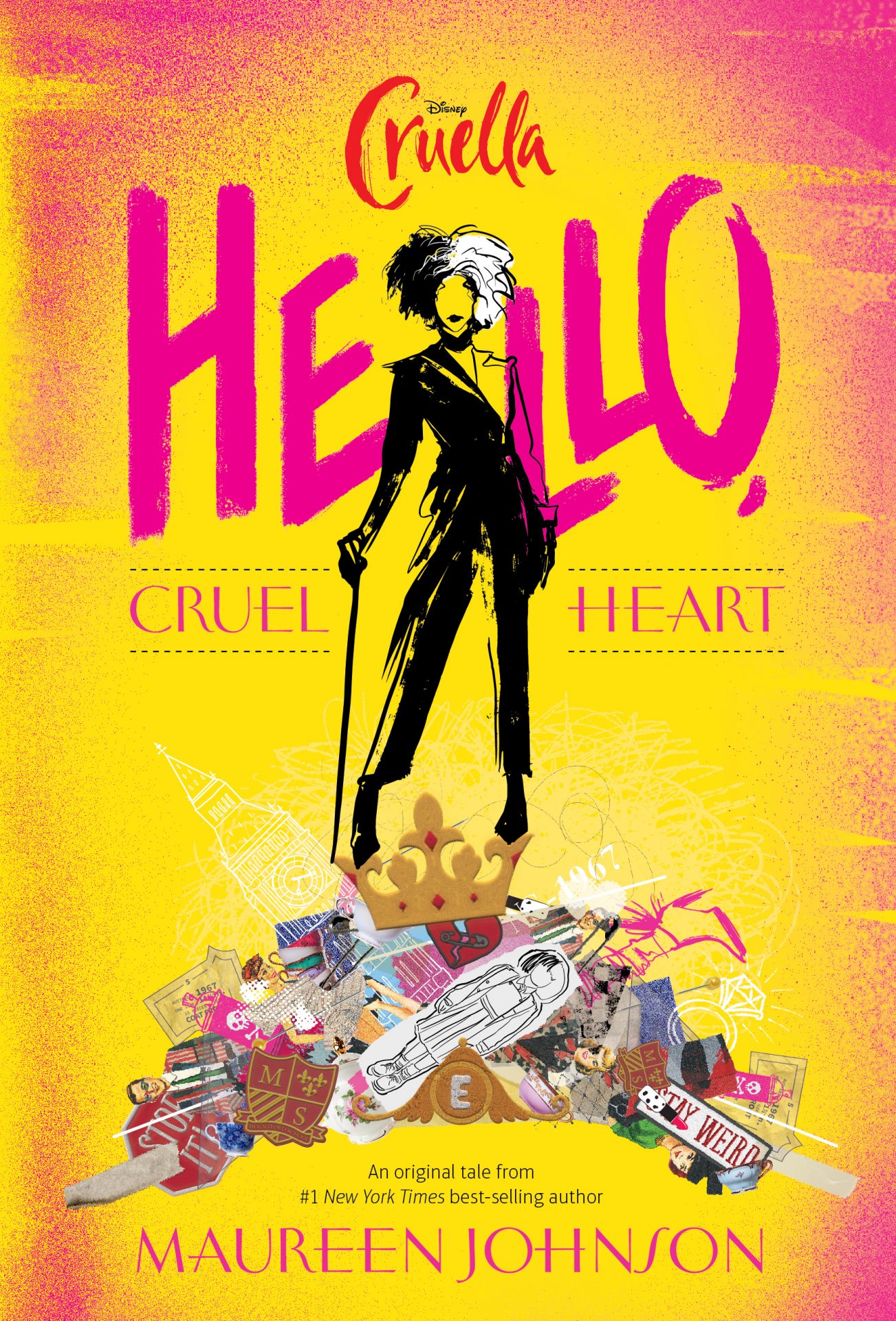 We’re delighted to share an exclusive excerpt from Hello, Cruel Heart. This passage highlights Estella doing what she does best: designing. Enjoy.

“Make it snappy,” Jasper said under his breath as they exited the lift on Liberty’s fabric floor. “I feel a revolution brewing in the trouser department.”

Estella glanced sidelong at her partner and saw that the mice were visibly wriggling around. She had a good idea of what she wanted, and she quickly settled on an indigo velvet that had a silvery sheen.

Jasper walked to the far end of the fabric floor and pulled on a cord in his pocket, which opened a different, tearaway pocket further down, near his ankle. The mice spilled out over his shoe. He walked away, letting the mice do their work.

It took only a moment for one of the shop assistants to look down and see the trail of disgruntled mice running across the floor. When the scream came, Estella knocked the roll of fabric to the floor and knelt by it. Jasper held the roll as she began unspooling the fabric, feeding it down into the waistband of the giant bloomers, stuffing as she went. Down, down, down. Pounds and pounds of velvet. Her skirt ballooned out. He helped her to her feet. The masses of fabric made walking difficult; her feet pointed out to the sides.

“How horrible!” she said as they left the way they came. “Mice! In Liberty!”

Moments later, they were back out on the street, Estella waddling along in her velvet-filled bloomers.

“Did we have to do Edna and Fred on a day like this?” Jasper grumbled, loosening his collar.

“What are you complaining about? I’m the one with a hundred pounds’ worth of velvet in her bloomers.”

“Well, I’ve got a dozen mouse bites on my leg,” Jasper sniped.

At the first possible opportunity, Estella ducked into an alley to remove the fabric from under her skirt.

“Here,” she said, thrusting the velvet at Jasper. “You take it for a while. I need to walk with my legs pointing in the same direction for a moment.”

As they continued toward the bus stop, Estella thought of how nice it would be in the future when her fabric was delivered to her. She would be sitting in her eponymous atelier, sipping a glass of wine, looking over her table of designs when it arrived—loads of it, more than she could ever use. Estella let herself sink into the familiar fantasy, where it was always approaching dusk, with the lights of London twinkling outside. She had a room of dummies wearing her in-progress creations. There were furs in this fantasy, too. Lots of furs. Wonderful trims, exquisite collars, resplendent coats. Her atelier was cool and perfectly lit. It smelled of jasmine perfume. And in the background, the musical sound of sewing machines—

“Really good mouse haul today, as well,” Jasper commented, jarring Estella out of her reverie, as he hefted the bundle onto the bus. “I don’t think it’s ever been so easy to get so many of them. Must be the weather.”

Estella grunted a reply. There were no mice in her fantasy atelier. Mice were banned.

Estella spent the next few days drawing, tossing aside, and redrawing.

The sleeves were too wide.

Taper them a bit.

When Peter moved his arm with the guitar, the cuff would strike the strings.

Take off the buttons.

Sew the cuffs down.

She was working over the design for what had to have been the twentieth time when Jasper leaned over her worktable and tapped his finger on the surface to get her attention.

“Is anyone at home?” he asked.

She looked up from her sketches. A bead of sweat rolled down her nose and landed on the pad.

“I’ve been working,” she said, blinking. Her eyes had to refocus on a human face. She had been very close to her sketch pad.

“What’s that for? What kind of disguise is that?”

“It’s not,” she said, snapping her drawing pad shut. “It’s one of my personal designs.”

“Yeah,” Horace chimed in. “Every day we’re not out there is wasted. It’s all tourists! It’s good pickings out there.”

“Come on,” Jasper said, playfully bopping her on the shoulder. “Come out in the sunshine, Stel. Let’s go have a little fun.”

It was true that it was a blazing sunny day. It would be perfect for a little outing.

Estella looked down at the pile of newspapers she kept on the floor by her sewing table. Something caught her eye, a perfect way to get in an afternoon of heisting and fashion education at the same time. She picked it up.

“What if we set our sights a bit higher?” she asked, spreading out the paper on the ground and pointing to an article that read exhibition of youth fashion to be held at savoy hotel.

“To a fashion show?”

“Why would we go to a fashion show?” Jasper asked.

“Because,” she said, “the people who go to them are very rich, and they pay no attention to their stuff. They’re careless.” This was a central principle of the rich the trio had always assumed—that they were careless with their possessions, and that such carelessness translated directly into the group’s ­pockets. Since having forged her new friendships, Estella now knew it to be true.

“Dunno,” Horace said. “We could do just as well at a cheaper place and there’s no lookout on those. Lots of tourists. Easy pickings.”

“But think of what we could get at the Savoy,” Estella said. “One wallet there is worth five or six somewhere else.”

Horace considered that for a moment.

“Could do the dodgy-tummy run, I suppose,” he finally said. “Stel goes in, does the deed, leaves the drop for us.”

The dodgy-tummy run was pretty much what it sounded like: one of the party would go to an event, swiping wallets and trinkets and watches along the way, stuffing them into false pockets. They would then grasp their middle, holding the takings under their arms, and run to the toilets. No one asked questions if you grasped your middle and ran to the toilets. No one wanted to know. Once there, the wallets and other goods would be removed and tossed into the bin in the toilets. Another member of the party would come and remove the trash. And that was that. Simple and very effective. It worked pretty much every time.

“That means I have to be Mrs. Hooverbottom, doesn’t it?” Jasper groaned. “First Fred, now her, but all right. As long as we do a job.”

“We could still do the park,” Horace said. “Safer, easier.”

“What’s the point in that?” Estella asked, trying not to show her frustration.

Estella smiled. “Well, that doesn’t sound like much fun.”

Hello, Cruel Heart arrives on April 6, 2021. You can place your pre-order now.