CONDOTTIERE is a Tense 45 Minutes of Conniving and Scheming - Nerdist

The Italian 13th Century was a pretty good time to be alive, assuming you were a wealthy landowning man of course. Trade was flourishing, and your neighboring city-states had weak standing armies. With a little coin and an eye for conquest, it was possible to expand your holdings via military might. Condottiere plops you right into the middle of this situation and pushes you into battle in a fantastic 45 minutes of scheming and bluffing.

Condotierre is primarily an area-control game. Italy is sliced into a number of city-states arranged on a relatively small board. Unlike other games in the genre, your table is not full of plastic miniatures or tokens representing warriors. The “combat” occurs above the table, between players. Cards drive the battle but the battles are primarily abstracted. The goal is to control 3 connected areas, or 5 areas overall. 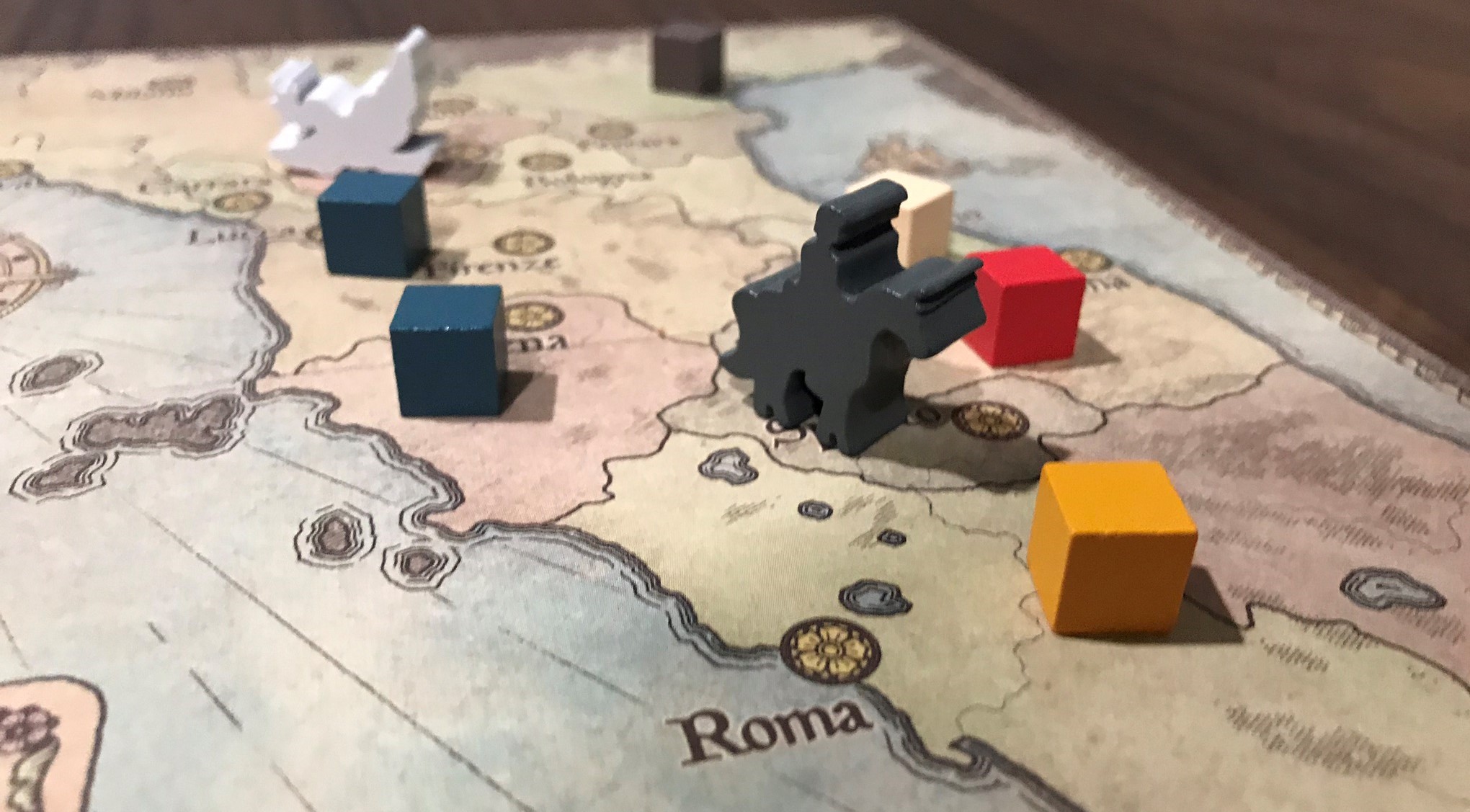 Each player has a hand of cards that determine their available forces. The bulk of the cards are standard mercenaries, numbered 1 through 10. Mercenaries are straight forward and simple; the higher the number the more powerful the combatant. At the end of the battle the player with the highest total value wins. In effect, you’re bidding to win the active province using mercenaries instead of value. It seems simple but the beauty is in the details.

In addition to mercenaries, there are a number of special cards. While this edition is published by Z-Man games, Condottiere was originally published by Fantasy Flight Games and there are some impactful differences between the editions. The Bishops – present in both editions – sees the biggest change. When played with the new rules, the Bishop will eliminate all copies across all players of the highest value mercenary on the table. It can create a dramatic swing in fortunes, especially if a couple of people have played high-value cards to try and bully their way to victory.

Other special cards include two seasons – spring and winter – that create global modifiers, spies that become more powerful the more you have, and a powerful Heroine worth 10 points herself while immune to Mercenary targeting effects like the Bishop. These dramatic cards are what make Condottiere feel like an area control game of combat and not an auction game. Scheming and bluffing is rampant;  you can even bait your friends into over-committing their forces into a province you don’t care about and pull your mercenaries back with the Scarecrow card.

That said, the Special Cards are not what made Condottiere one of my most anticipated re-releases last year. In a brilliant twist, all players lose their committed cards at the end of battle and you won’t necessarily refill your hand each turn. This is known as a Tullock Auction and it raises the stakes on every single fight. Hands are only refreshed once only 1 player has cards left in their hand at the end of a battle; it’s possible for you to drain an opponent of cards and slide in for a couple of back-to-back victories if you’ve played your cards right. 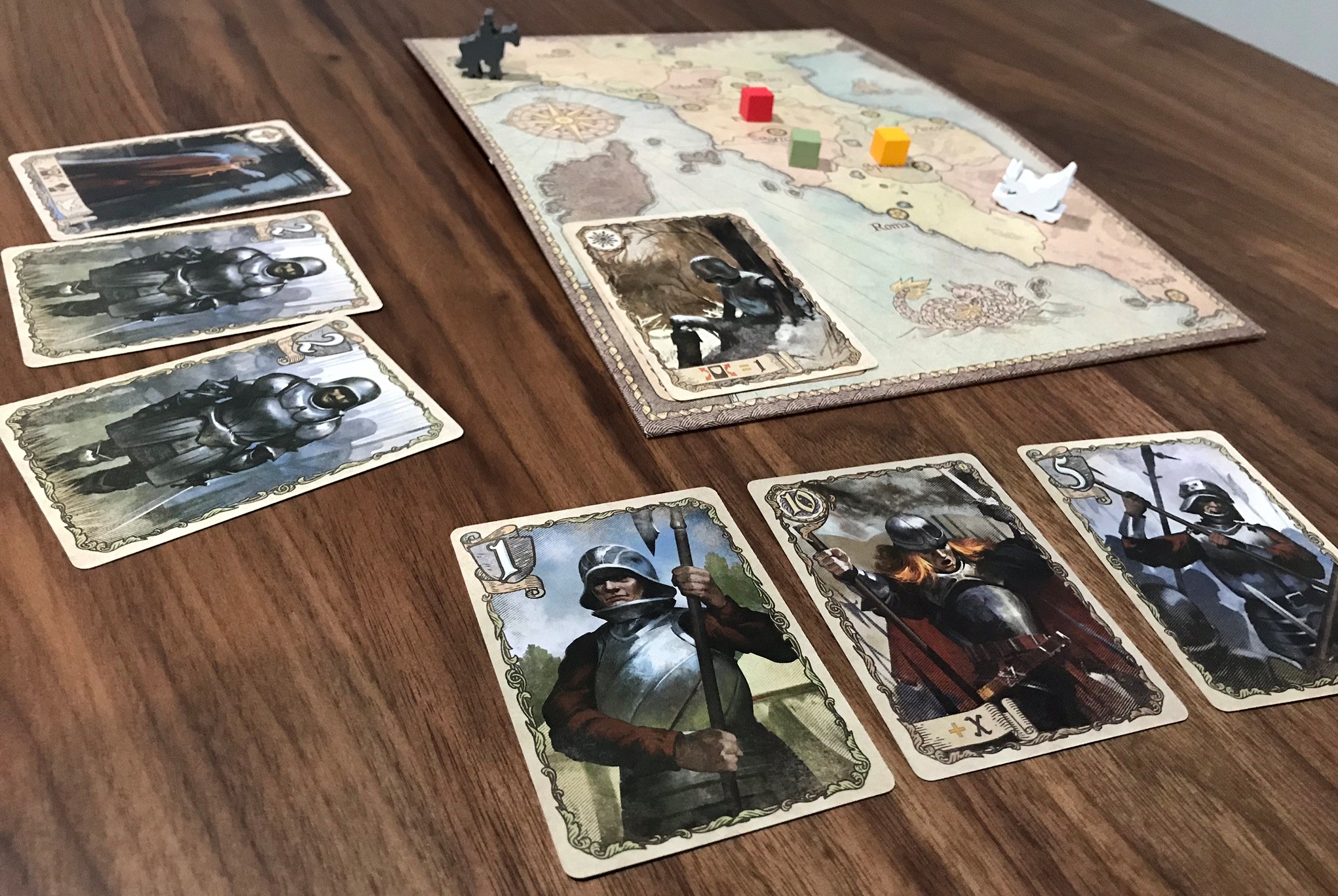 The tension in Condottiere can be excruciating. Knowing that you’ll lose all the cards you play each round makes each one seem more valuable. The table typically explodes with cajoling chatter; it’s always better to convince someone else to prevent the leader from gaining a new province than it is to use your own cards! There’s even a mechanism by which you can collude to force a card reset. If one player is miserly holding on to their resources hoping to win a few easy battles then the table can ruin their plans with a little cooperation.

The Tullock auction system is also why I, unfortunately, enjoy the classic rules more than the updated one. The classic Bishop forces an immediate end to the battle with no winner declared. The presence of such a powerful effect makes the decisions to play high-value cards even tougher, as it’s possible to see their force wiped out by fiat. A few of the other special cards aren’t included which balances out the chaos of a Bishop. Luckily, the new printing includes everything you need to play with the original rules, including the rules themselves! I find that battles end faster but the game takes a touch longer with the original rules, so it’s nice that you can choose which ones work best for your group.

Whether you hone your strategies using the new rules or stick with the old ones, Condottiere is almost sure to please. The short game time means you can get a few games in or use it to wind up a game night. Due to the tension – and potential arguing – elicited by this game that plays way bigger than its box size, I’m not sure I’d use it to wind down a night. You want to make sure there’s time to throw down a white glove and demand a rematch.