The Conan O'Brien Sketch I Will Always Cherish the Most - Nerdist

The Conan O’Brien Sketch I Will Always Cherish the Most

Last night, Conan O’Brien paid a tender goodbye to his career as a late night talk show host. He capped the hour with a 15-minute speech articulating his appreciation for the varied longtime members of his crew. Though laden with jokes, it was an earnest and lovely way for Conan to conclude an inimitable 27-year-long stint. This combination of sincerity and silliness is what has enriched Conan’s run as a comedic giant. And for me, the purest distillation of that can be found in a remote segment in 2004.

There is, of course, no one funniest Conan O’Brien sketch. Every fan has a different favorite entry among his decades-spanning catalogue of buffoonery. But this morning, in timing with the conclusion of Conan’s late night talk show run, I’ve decided to treat you to mine. And to get personal about why this abundantly stupid bit has held a place in my heart for so long.

In 2004, Conan spent a week hosting Late Night in Canada. I can’t quite remember why, though the rewards were plentiful. (I recall a lively interview with Jim Carrey among the many highlights.) But topping all other standouts was Conan’s self-appointed gig as a Canadian Mountie. For a remote segment, Conan donned the ill-fitting bright red uniform and posted up at the Canada–United States border. While there, he brought giddy shame to the office, to both nations, and to the very idea of international diplomacy.

Not terribly far south, a 15-year-old me watched all of this unfurl on my bedroom television set. The segment aired amid the nebula between Thursday night and Friday morning; this meant anticipation of a weekend spent harangued by despairing isolation or paralyzing social anxiety. At 15, I was agonizingly depressed and fostered very little love for myself. I was years away from coming out, and even more from developing a sense of self I could sympathize with. Suicide was never far from my mind, and was very much at the helm on this particular night.

When feeling most merciful, I allowed myself to drown out the inner noise with television, or tried to. By this point, Late Night with Conan O’Brien was a go-to for this service. Partially because the show aired at a particularly vulnerable hour. And partially because there was some magic in his particular brand of self-effacing disregard. The humor didn’t disconnect me from my challenges; Conan has never shrugged off his own self-deprecation, and thus never forced me to shrug off mine. 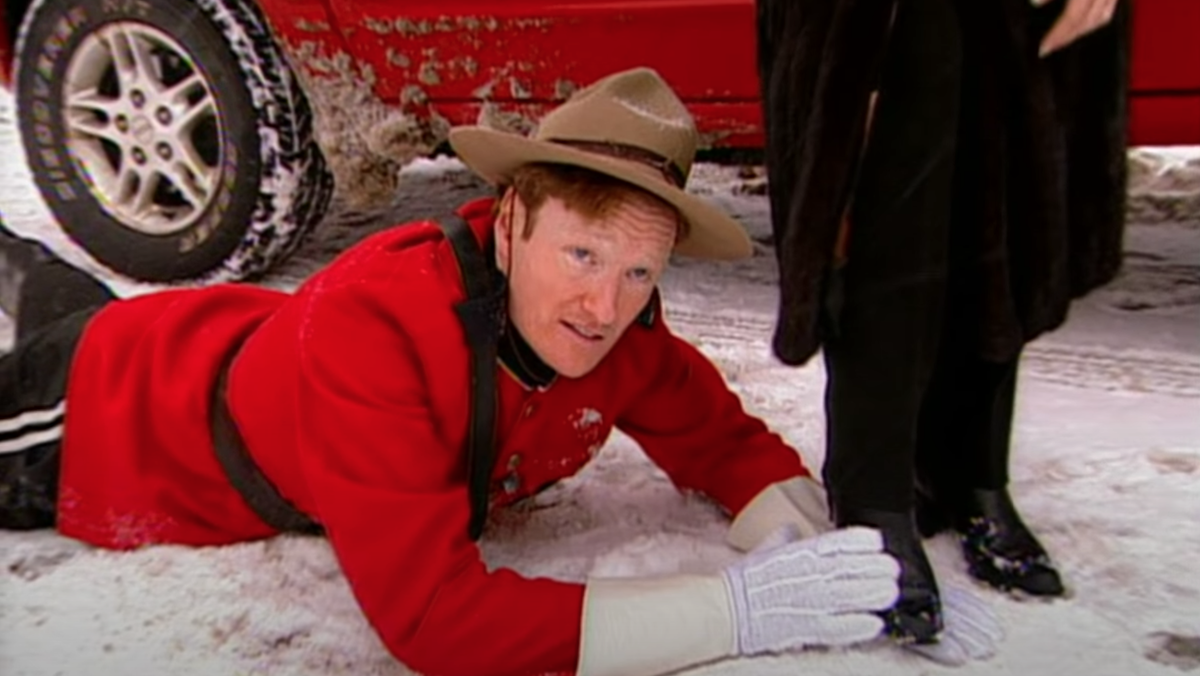 In leaning into the ridiculousness of his very being, Conan didn’t drum up sorrow. Instead, he celebrated what made him ill-fit for this world. (And often, what made this world ill-fit for this world.) But what distinguishes Conan among many comedians is his relationship with the world from which he makes so clear he’s estranged. This comes into play in interviews, when he makes his guests feel like a superior species to him; in man-on-the-street segments, when he disarms his subjects by rendering himself delightfully inscrutable; and, perhaps most significantly, in regard to his viewing public. There’s very little distance between Conan and the viewer. He welcomes you into his mania, his angst, his devotion to silliness. And in turn, he invites you to experience, and revel in, the very same.

During his short tenure a Canadian Mountie, Conan reminded me anew of the depths of his absurdity. What’s more, in how eager and willing he was to accept that he was so absurd. And in turn, he suggested that it might be possible, and acceptable, for me to do the same.