Australian coder Code Bullet built his own Tetris game from scratch to beat the world record for longest game. But Bullet didn’t play the game himself to beat the world record—he utilized an AI instead. An AI he also built from scratch, which, subsequently, utterly annihilated the existing record. Even though Bullet says the AI was unsophisticated and “brute force-y.”

Geekologie picked up on Bullet’s Tetris game, which the coder recently posted to his YouTube channel. Bullet says in the video’s description he specifically created the game and AI to beat the record for longest game. American gamer Harry Hong holds that record according to Guinness World Records, with a line tally of 4,988.

The first half of Bullet’s video (above) describes the way the coder built the game itself. The second half, which is especially enlightening, breaks down how the AI works. (That begins at around 8:30 in the video.) 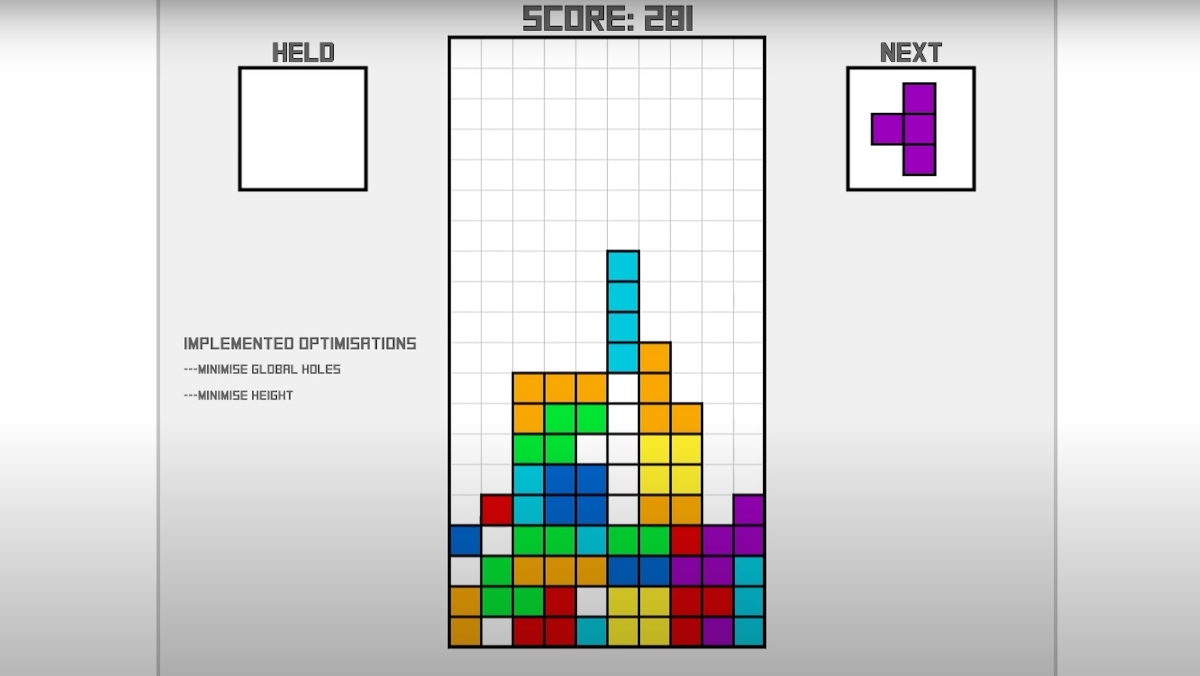 “[E]essentially, we just simulate every possible combination of key presses the player can input,” Bullet says in the video. He adds that each combination resulting in a piece added to a new end position is added to a list of finished positions.

In other words, it seems Bullet’s AI works thanks to its indexing a set of successful moves for any given situation. In this way, the AI does indeed learn which moves work and which don’t. Although, as Bullet says, this method relies on brute force computing more so than more sophisticated machine learning algorithms.

Next Video ideas
1: Bullying Nerds in JTris (a tetris game)
2: AI learns to fly in a flight sim in like unity or some shit
3: Making a calculator/computer in conways game of life
vote now so i don't have to make decisions

While the AI is “brute force-y,” however, it still manages its task of destroying the record for most Tetris lines cleared just fine. In fact, by the end of the video, the AI has racked up more than 14,000 lines cleared. Bullet even says that if he wanted to, the AI could clear lines ad infinitum.

What do you think about Code Bullet’s Tetris game and Tetris AI? And what would you like the Australian programming genius to build next? Let us know your thoughts in the comments!