Codenames: Pictures Is Worth A Thousand Words - Nerdist

Codenames: Pictures Is Worth A Thousand Words

Codenames is so ubiquitous that, unless you just thawed from carbon freezing, you’re stomach probably has warm and fuzzies from me just mentioning it. It won the 2016 Spiel des Jahres—which is kind of a big deal—and is so commonplace in the table top scene that you’ve probably played a game or two in your dreams. My buddy Ben is downright terrible as the Spymaster in that setting.

For all you Han Solos out there, this party game is simple. Two individuals are giving clues to their respective teammates. They take turns offering one word pointers that (hopefully) connect multiple face-up cards. The trick is that each of these Spymasters wants to link specific cards without accidentally leading their team members to guess the opponent’s. There’s even an assassin card which causes your team to automatically lose if chosen.

These leaders know which cards are theirs due to a nifty randomized solution grid only they can see. So, by looking at this key they need to fairly quickly scrape through the depths of their mind and find common linkages between the variations. While doing this you of course need to know who you are working with on the other side of the table. An obscure reference to Zack de la Rocha may not go over so well if you’re gaming with the local Church group.

Codenames: Pictures is the brand spanking new sequel to this immediate hit. Instead of a grid of randomized words in the center, we’re dealing with abstract pieces of art that are seriously trippy. You have stuff like a seahorse donning a saddle, melting clocks, and a car that’s half-lady bug. I didn’t know the ghost of Salvador Dali was up for board game commissions but here we are. 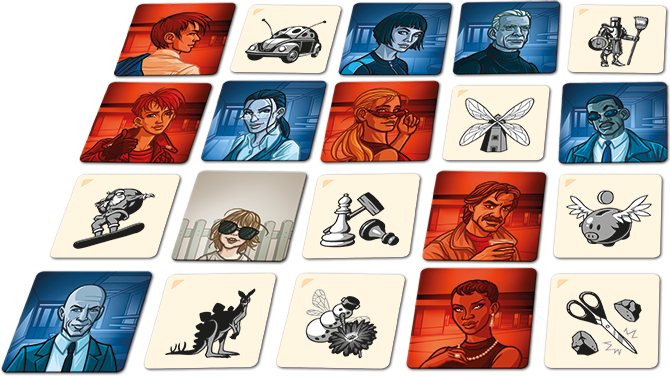 Regardless of images or words, Codenames succeeds because it’s a board game that makes you feel clever. Most titles in this genre want players to come up with clues to guess a single solution. This design has you coming up with clues that link multiple items, but it gives you freedom and room to reflect. This makes a sequence of giving a difficult lead followed by fantastic guesses exceptionally satisfying. You want to high-five your teammates and pull out that end zone celebration you’ve been honing your entire life.

Pictures doesn’t stray from this formula. Where it differs is primarily in how you formulate those clues. With plain words, it’s a more straightforward process to craftily come up with ways to exclude the cards belonging to your opponent. With illustrations, however, it can certainly be more challenging.

The difficulty here arises from the fact that most images can be linked to a great number of concepts. It’s 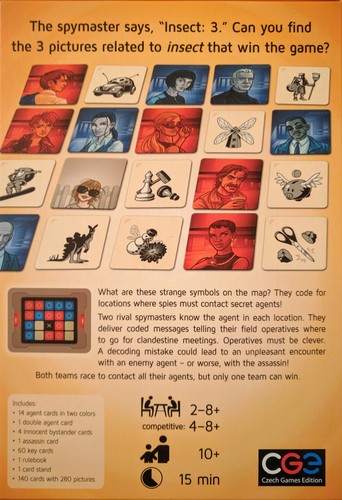 like reverse engineering your clues from Codenames proper, but you have more options with each drawing. This means it can be more challenging to exclude cards. In early plays this will result in less confident answers and more dramatic swings.

Eventually the hump will be surmounted and you will adapt. The end result is an interesting twist on the Spiel des Jahres winner that has you working through altogether new mental challenges. The way it causes you to shift your mind and develop a new skill set is interesting. It can also be frustrating upon your first few plays if you’re stuck as Spymaster and struggle out of the gate. That strife is worth it as you will ultimately find a beautiful landscape beyond the wall.

Codenames: Pictures doesn’t reinvent the wheel or swerve off the road. It strays just enough from its roots to make for an interesting product. What’s most remarkable is that there is a great deal of utility in throwing down a mixed game of words and pictures for maximum delight. Let loose and mix it up; you won’t regret it.

Are you a Codenames fan? Looking forward to Pictures? Tell us in the comments below!

All other images courtesy of Czech Games Edition