Classic Horror Books You Can Read For Free Right Now

We love being scared, but only if it’s the right type of scared. Not COVID-19 scared. We prefer great terrifying stories, the kind of nightmares we can get away from by putting down our novel. Fortunately, there plenty of great horror books for us to read without having to spend any money on them. Here are classic horror books you can download for free right now at Project Gutenberg. 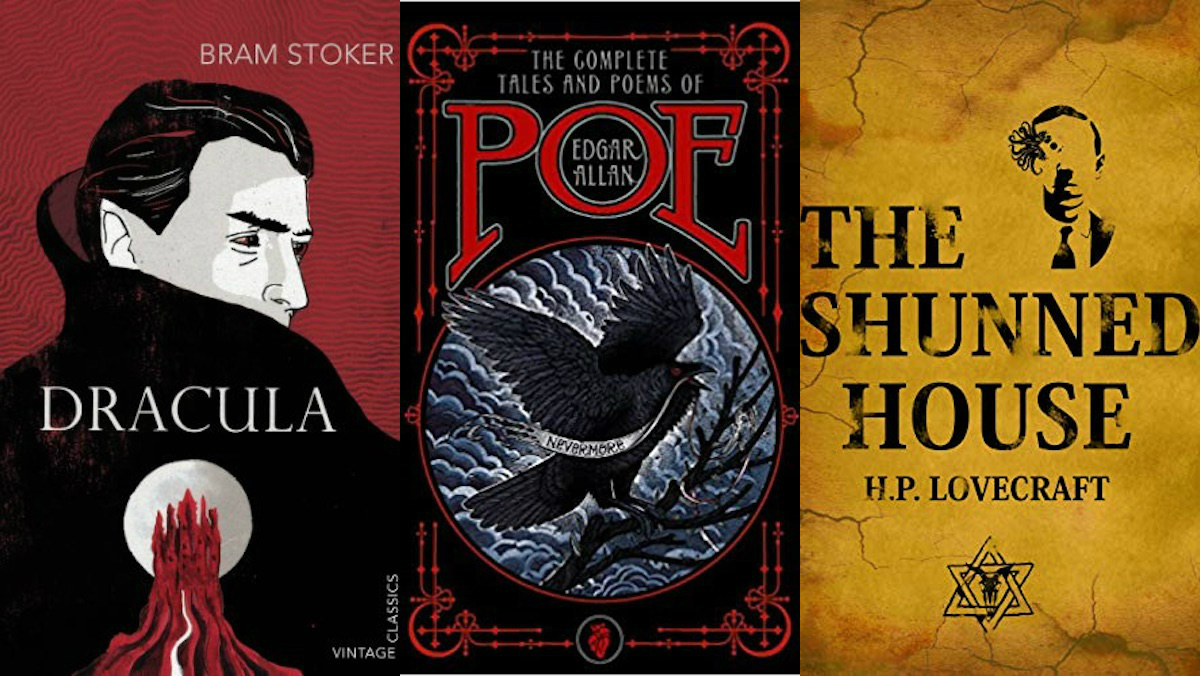 Bram Stoker’s iconic Gothic horror novel Dracula is still a masterpiece of the genre. First published in 1897, it’s responsible for many of the vampire tropes we know to this day. It’s also absolutely terrifying for a modern audience, in an unexpected way. It tells the story of a monster who leaves his home to spread a terrible disease. But don’t worry. Vampires aren’t real. Maybe. You can also download more of Stoker’s scary stories, including The Lair of the White Worm and The Jewel of Seven Stars.

It’s impossible to pick just one or two of Edgar Allan Poe’s stories to recommend. Arguably the greatest horror writer ever, he produced so many iconic works. So don’t pick. Read his Complete Works, which includes all-time classic short stories like “The Cask of Amontillado” and “The Tell-Tale Heart,” as well as famous poems like “The Raven” and “Annabel Lee.” If you want to skip “The Masque of the Red Death” right now though, we understand.

The Turn of the Screw (Henry James)

Henry James’ 1898 novella The Turn of the Screw has inspired countless adaptations in film, television, and literature since it was published. That hasn’t made the original story any less terrifying though. In fact, readers are till debating the true nature of evil in the classic ghost story. It makes us feel better about being trapped in our own, non-haunted homes. Things can always be worse. When you finish, you can also start working your way through James’ extensive bibliography.

The King in Yellow was first published in 1895, but Robert W. Chambers’ collection of supernatural short stories is just as terrifying today as it was then. And while it’s a fantastic example of early horror fiction, it also includes elements of mythology, fantasy, mystery, science fiction, and romance. Even if you’ve never read it, you were probably already terrified of it. It inspired season one of HBO’s True Detective, which spoke of the Yellow King of Carcosa.

The Mysteries of Udolpho (Ann Radcliffe)

A classic of the Gothic genre, Ann Radcliffe’s 1794 novel The Mysteries of Udolpho was wildly popular when it was first released with good reason. Featuring ruined castles, the Italian countryside, a beautiful young heroine and an evil uncle trying to force her into a marriage she doesn’t want, it also features strange, possibly supernatural occurrences. If you’re looking for an even darker Gothic novel, you can also read Horace Walpole’s The Castle of Otranto.

One of the most famous horror writers of all-time, H.P. Lovecraft is almost a genre unto himself. His weird “Lovecraftian” tales of monsters and madness could fill days and days with terror. Unfortunately, most of his works or not yet in the public domain. But you can still download his great novella The Shunned House for free. It’s creepy and unsettling, and you can follow it up with his fantastic short story “The Dunwich Horror.”

One of the most celebrated and prodigious horror writers of all-time, Algernon Blackwood left behind a cornucopia of creepy works. That includes his 1910 novella The Wendigo. It’s a terrifying monster story whose influence can still be seen any time someone goes running through the woods or snow. And when you finish that you can work your way through more of Blackwood’s scariest stories, which includes plays, novels, and short story collections. We highly recommend his Incredible Adventures collection.

Not every nightmare is a work of fiction. That includees Nellie Bly’s firsthand, undercover 1897 account of being a patient at a New York City insane asylum. What she saw and experienced there was so terrifying, it led to major investigations and reforms. The book, which was taken from her series of newspaper articles, remains a journalism classic.

And reading it right now is a reminder that even though we’re all currently locked up inside too, we don’t have it so bad.