CHILLING ADVENTURES OF SABRINA Will Continue in Comic Form - Nerdist

CHILLING ADVENTURES OF SABRINA Will Continue in Comic Form

This week, fans of the Netflix’s supernatural teen drama The Chilling Adventures of Sabrina were dismayed to learn that the streaming giant had decided that the series would end with the upcoming “Part 4” this fall. But although the story is ending on TV, series creator Roberto Aguirre-Sacasa has announced that the CAOS story will continue. And in the media that birthed it—comic books.

Thank you for all the love, #sabrinanetflix fans. Part Four is our best yet and Part Five, “Witch War,” would’ve been AMAZING. To be continued in the pages of #CAOS comic book... 💔🔮☠️🍔👨🏻‍💻 pic.twitter.com/wNvTfxYNfX

Via io9, we’ve learned that Aguirre-Sacasa revealed on Twitter that the show’s part 5 was planned on being called “Witch War,” which would have been an adaptation of a previous Chilling Adventures of Sabrina comic. That storyline centered around Sabrina’s dead (sort of) father Edward Spellman coming back into the mortal plane, and possessing ‘Brina’s former boyfriend, Harvey Kinkle.

Given the image he shared, it now seems this saga will now be re-adapted in comic book form at Archie Comics, only using the continuity and the actor’s character likenesses from the show. Even more enticing, it looks like we would have seen the full Sabrina/Riverdale crossover teased since CAOS debuted. 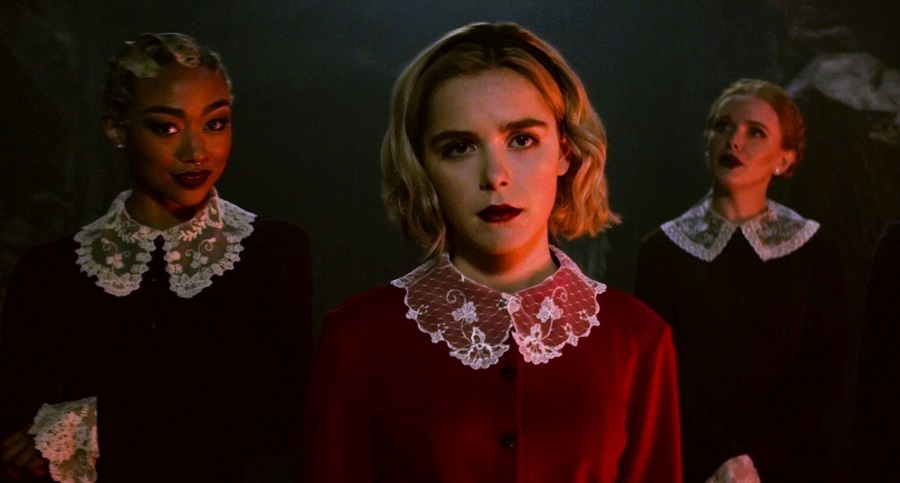 There’s no date for this comic book continuation quite yet. And honestly, several CAOS fans are hoping a comic book continuation won’t be needed, as the hashtags #Savesabrina and #SaveCAOS are already spreading like hellfire online. The series initially received a two-season order, later split into four parts. So whichever way you slice it, running just two years overall qualifies as very short lived, even by Netflix standards. And fans really want more of the witchy adventures of the Spellman clan.

Unlike several other shows on Netflix, given the well known IP of the show and the cult following it has, it’s not out of the realm of possibility that Warner Brothers, the studio that makes the show, takes it over to HBOMax. Or even the CW, to serve as a companion to Riverdale. Certainly Sabrina and the other residents of Greendale deserve to continue at least until the characters graduate from high school, right?