The 40 Best Moments from CADDYSHACK at 40 - Nerdist

The 40 Best Moments from CADDYSHACK at 40

Caddyshack wasn’t a smash hit when it arrived in theaters on July 25, 1980. The golf club-set comedy initially received mixed reviews and didn’t come anywhere close to being a record-setting success at the box office like its creators’ first film, National Lampoon’s Animal House. Obviously, moviegoers and critics just needed a little time to appreciate its brilliance. Over the last four decades, the film, featuring four comedy legends—Ted Knight, Rodney Dangerfield, Chevy Chase, and Bill Murray—at their absolute peaks, has become a cult classic. So to celebrate the movie’s 40th anniversary we’re counting down its 40 best moments. 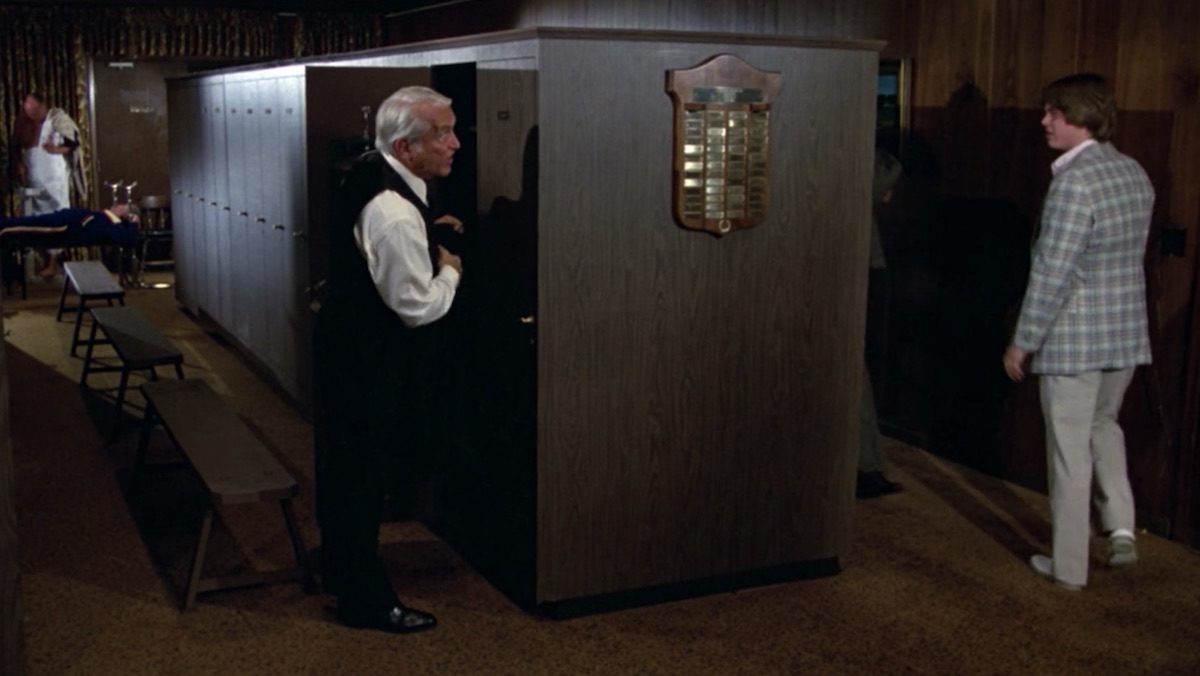 Right away, Ted Knight makes clear he’s going to own this movie with even the most basic lines. Here he perfectly shoots down his whiny grandson’s Spaulding’s pleas to avoid playing golf. Don’t feel too badly for the brat, though. He was apparently healthy enough to play tennis.

Just about every moment with Bill Murray‘s assistant greenskeeper Carl Spackler is amazing, including first full-fledged attack on the gopher ruining the course. Carl never did get the varmint, but he did create the world’s best golf course fountain show.

D’Annunzio he was right. Danny was being a jerk. So was Lou for doubling the price of Coke on his poor caddies.

36. Spaulding Has a Few Drinks 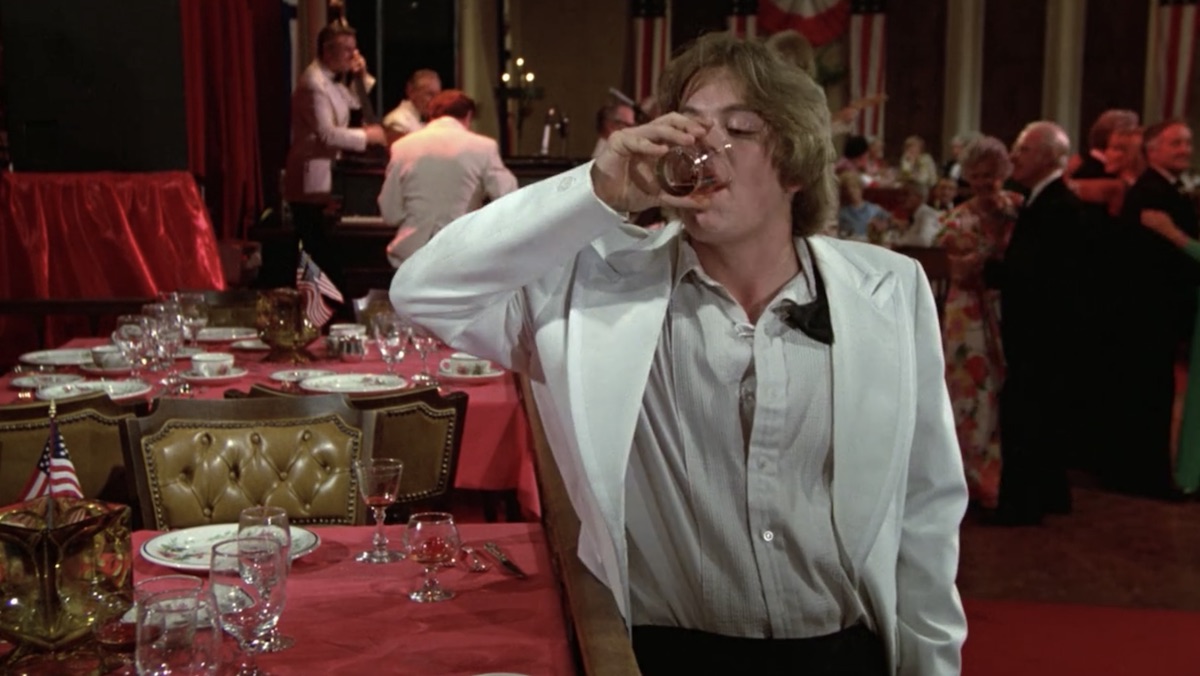 The original large adult son can’t hold other peoples’ abandoned liquor (or old cigarettes) and throws up in Dr. Beeper’s car, which the doctor then sat in. It’s the grossest sequence in the movie and also one of the funniest. 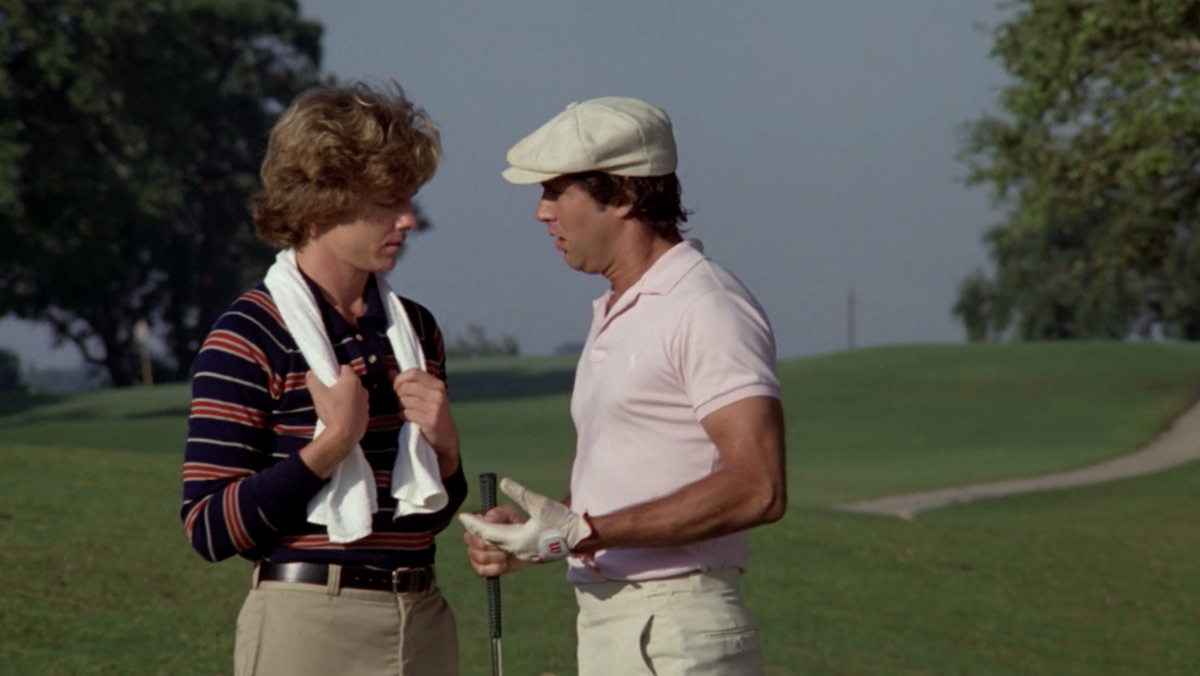 Never ask a Navy man if he’ll have another drink. And also don’t point out to an overly inebriated Bishop that he’s a man of the cloth.

Al Czervik knew there was only one way to celebrate Moose and Rocco helping the Judge find his checkbook.

31. The Judge Measures Up Ty 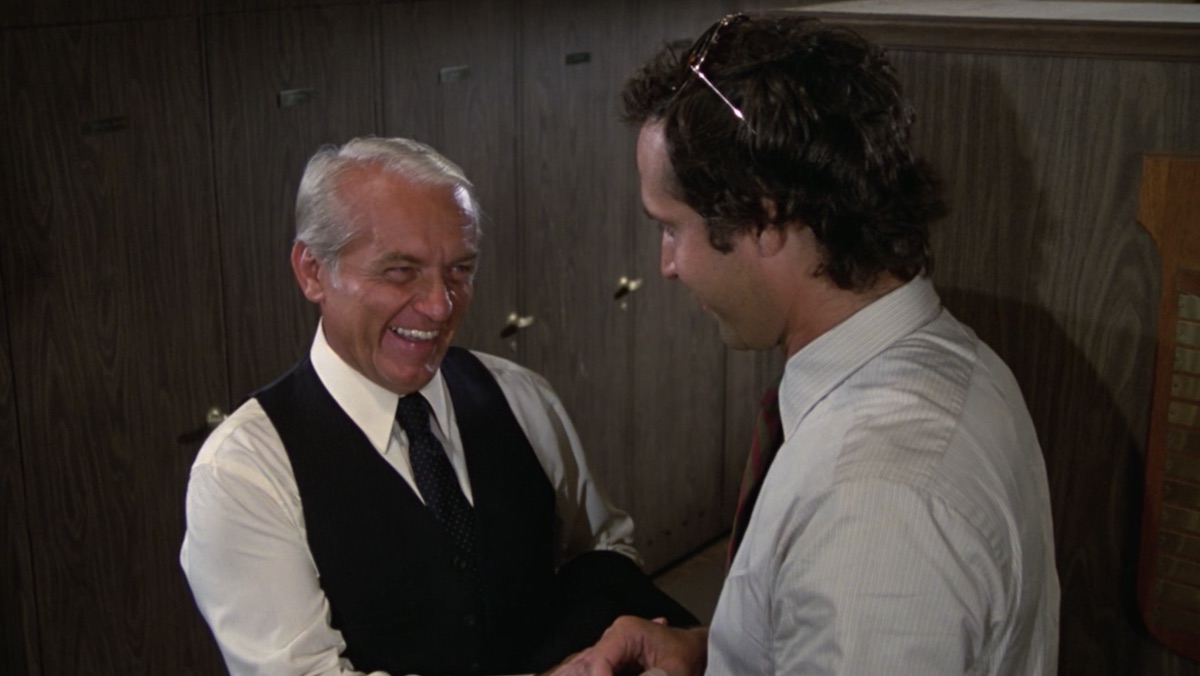 “You know you should play with Dr. Beeper and myself. I mean, he’s been club champion for three years running and I’m no slouch myself.”
“Don’t sell yourself short, Judge. You’re a tremendous slouch.”

For a rich slacker, Ty was not the most helpful mentor, but he sure was funny. 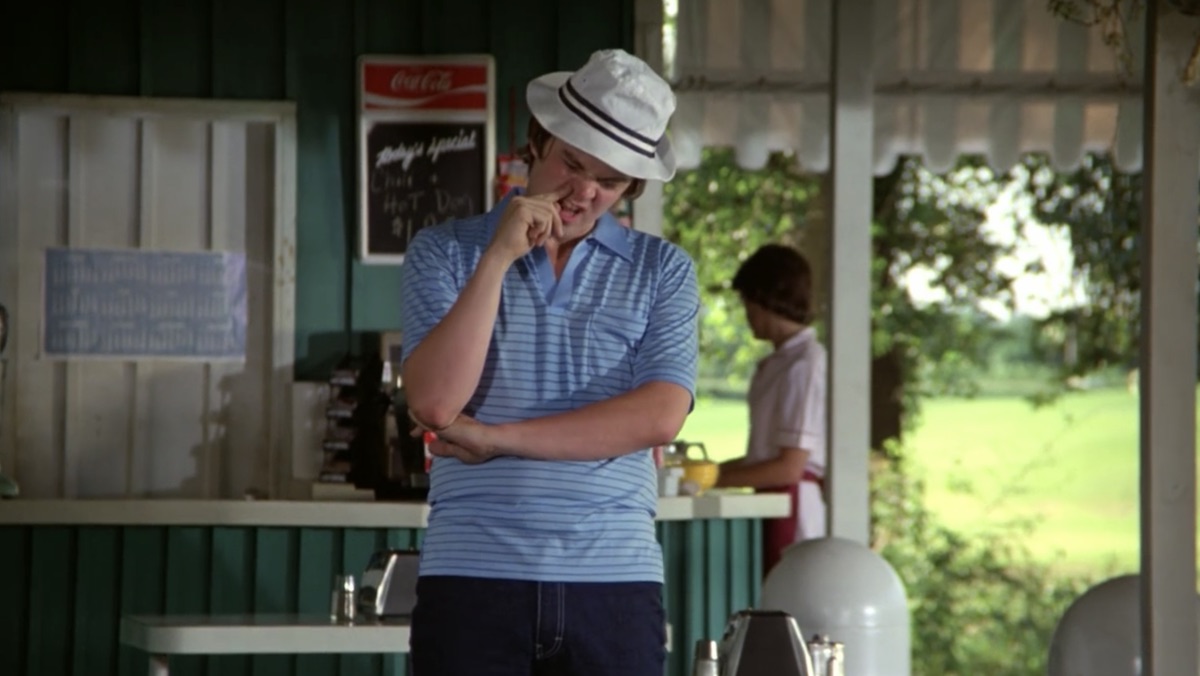 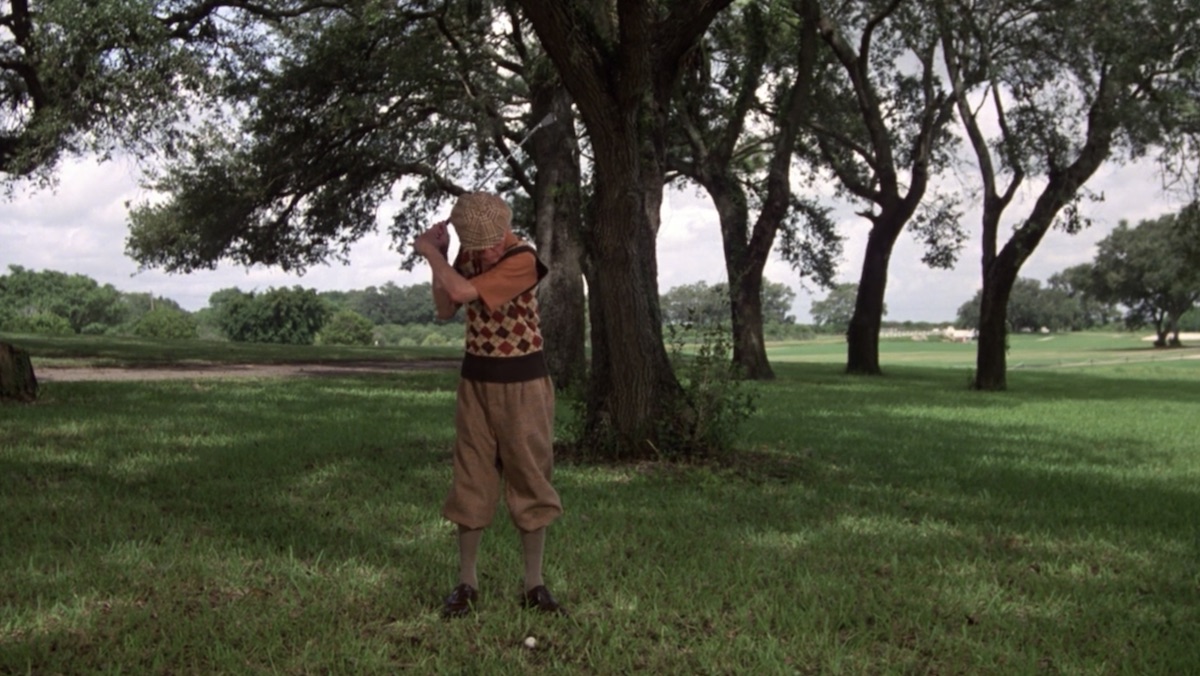 The Havercamps were hot that day!

27. The Judge Finds Danny and Lacey in His Bed 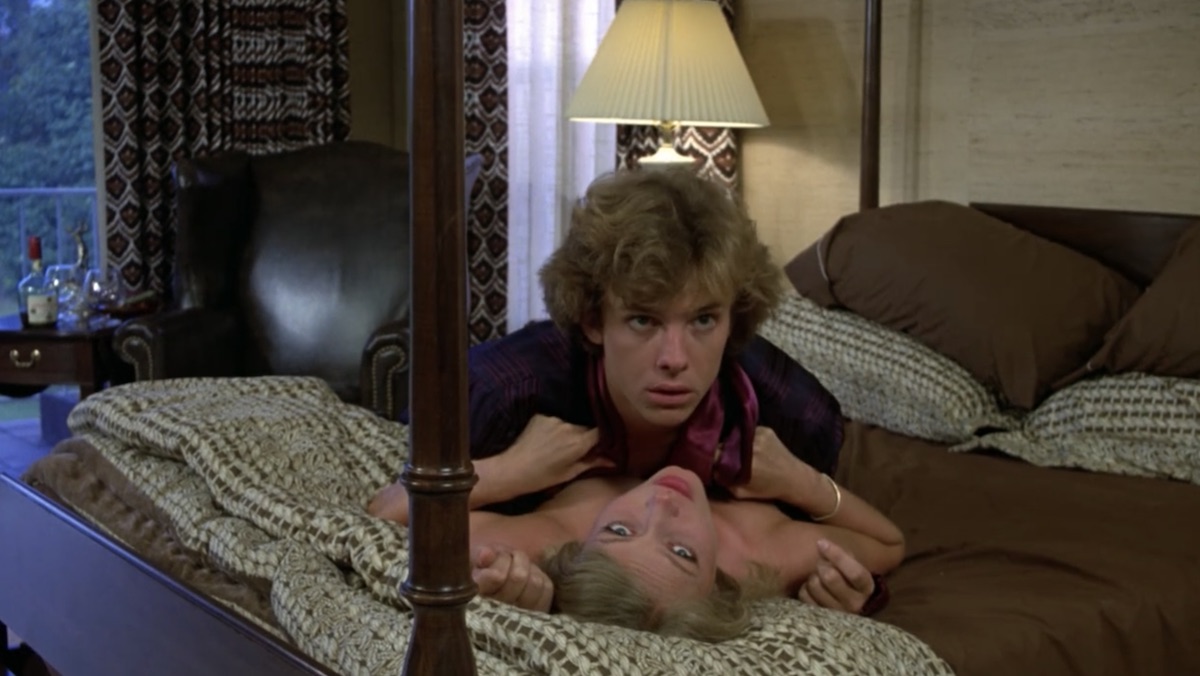 This is a classic physical comedy scene that is loaded with great moments, including the Judge’s usually stuffy wife taking a shower and liking what she sees in a naked Danny. 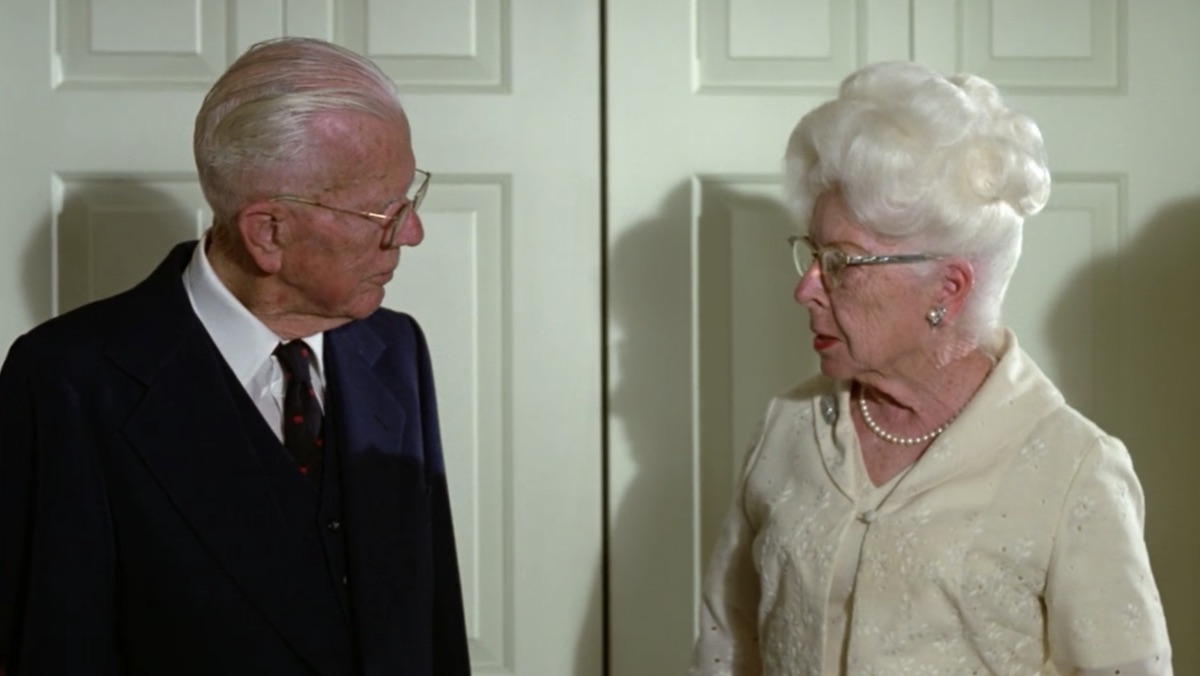 The entire ridiculous bedroom discovery sequence is capped off by the butler dropping the tray of tea over the railing and Mrs. Havercamp deadpanning this laugh-out-loud line. It’s all so perfectly silly and stupid.

25. Ty and Lacey Spend an Evening Together

From Ty’s original song and “drinking” tequila shots, to “making” a bottle of water and a late night swim, Ty and Lacey’s night together packs a lot of funny into a short time. 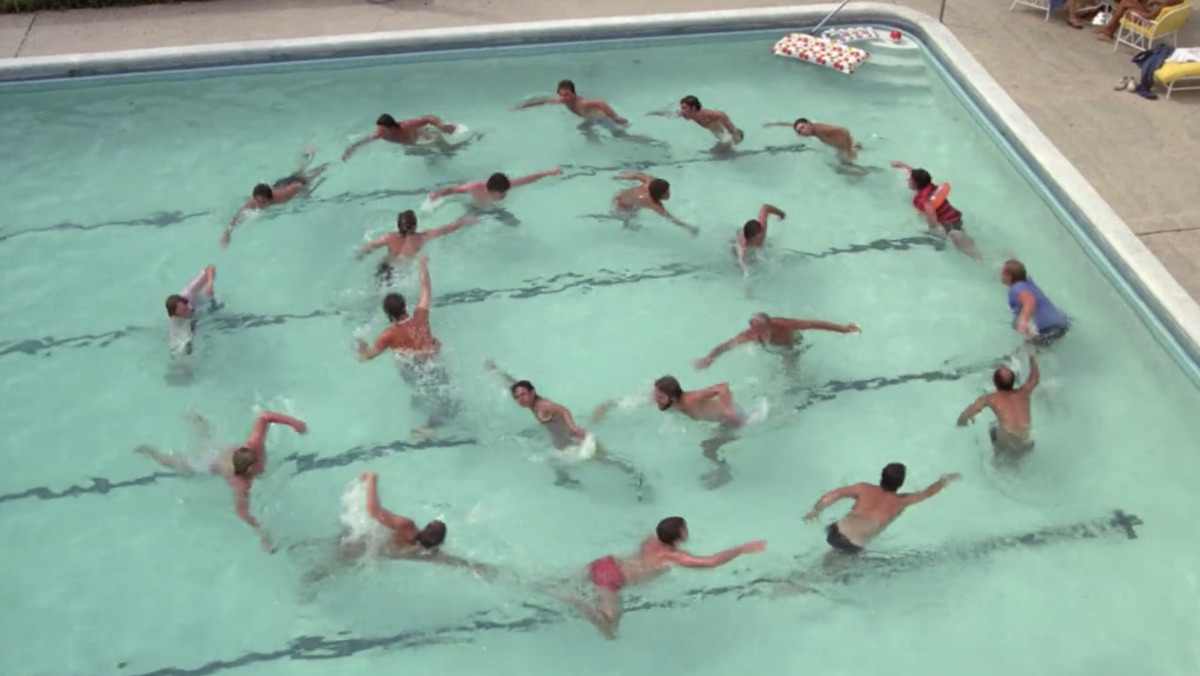 The caddies’ 15 minutes of club pool time is totally screwy. But it also features the film’s most graceful moment as the boorish caddies stop acting like animals and give an inexplicable performance.

The movie theme song GOAT does it again. “I’m Alright” is so good it even lets the gopher be funny during the opening and closing credits when the puppet dances.

We also have to laugh.

“I should have yelled two!”

Rodney Dangerfield was a treasure.

19. “I’ve sentenced boys younger than you to the gas chamber.” 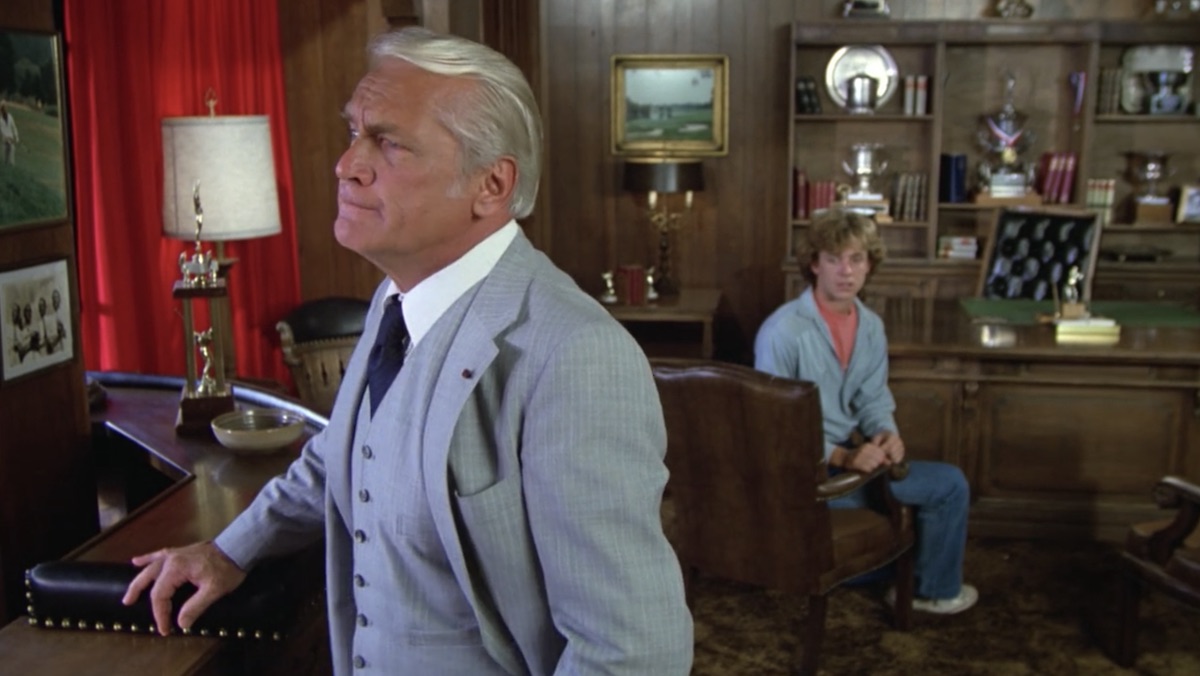 Smails didn’t want to do it. Felt he “owed it to them.”

Mrs. Crane drives Carl mad, as a perfect character gets a perfect introduction. 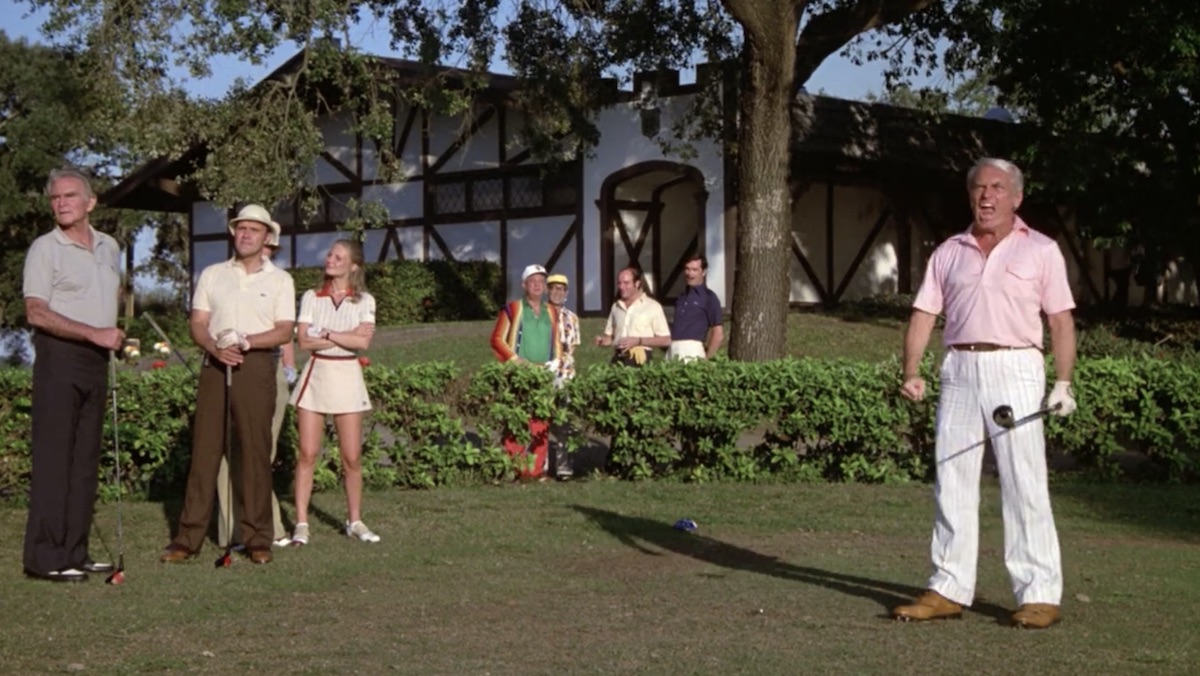 Fortunately for him gambling is illegal at Bushwood, so it’s fine.

This quote is too good not to get special recognition from the “I Never Slice” scene. It’s also the perfect thing to say to anyone moving too slowly.

Carl, as he was destined to, utterly destroys the course with dynamite, but in the process helps Danny’s final putt take the extra roll it needs. 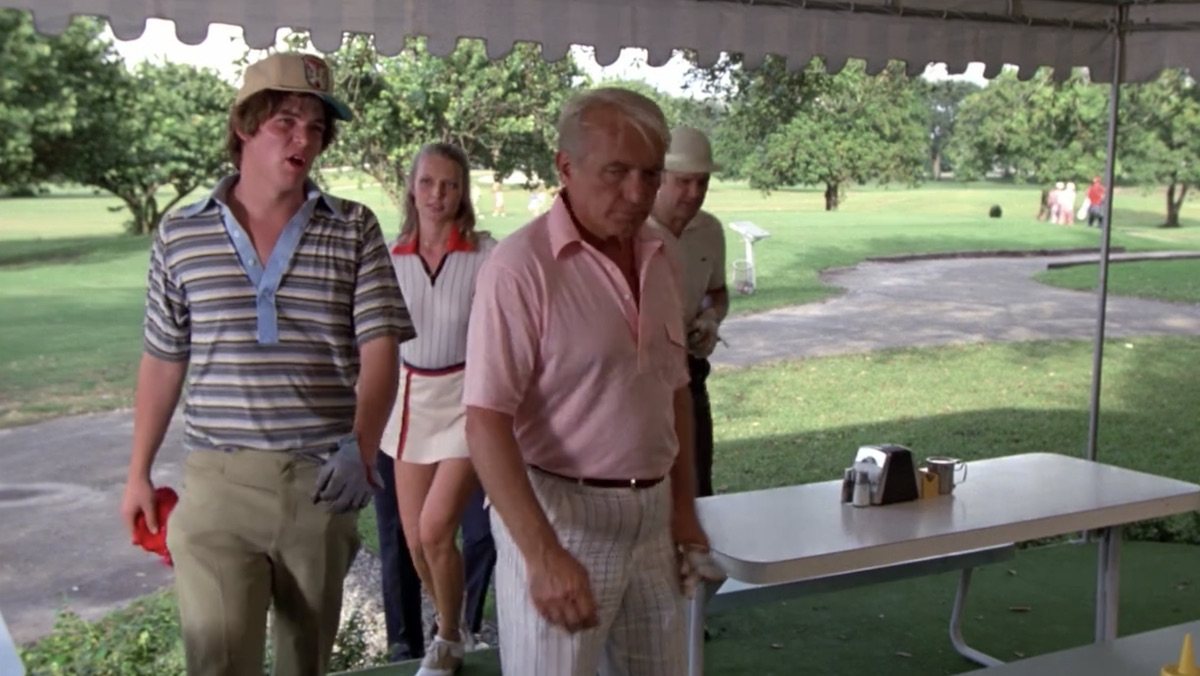 This whole movie could be Judge Smails yelling at Spaulding and it would be a classic.

If you’ve never said this to a friend while they’re trying to concentrate, what are you even doing? 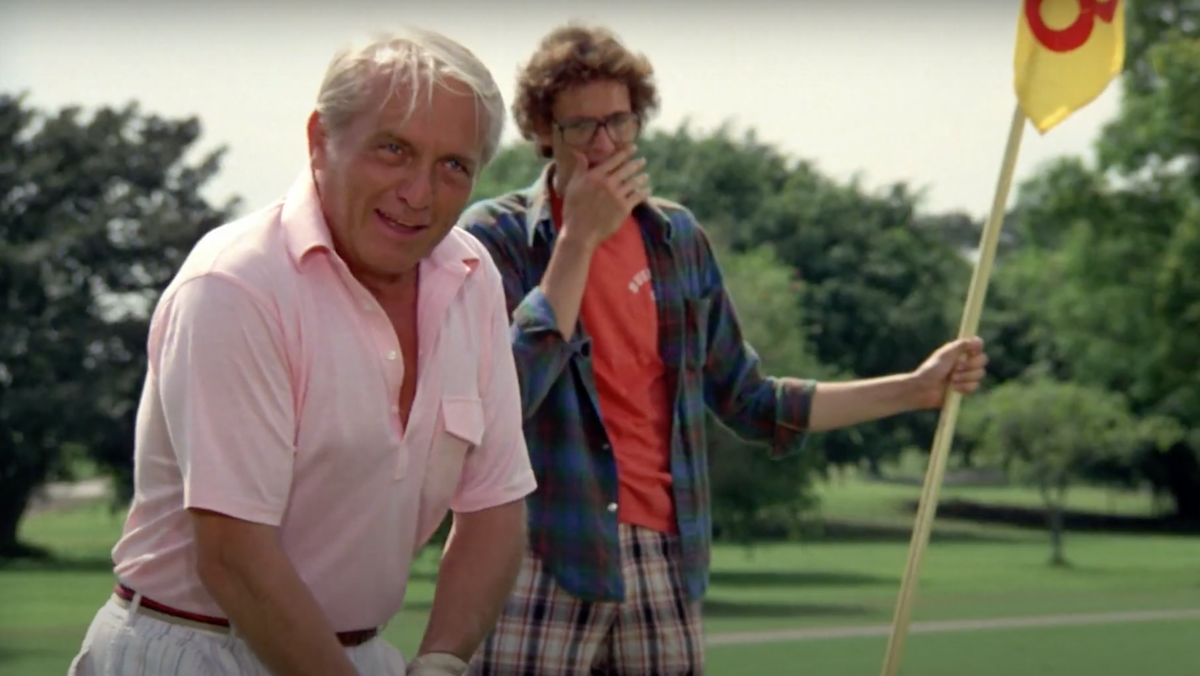 Al puts the Judge under unwanted spotlight, and he predictably withers. In a fit of rage, he throws his putter, and it hits a woman nearby setting off another crisis. It’s all so wonderfully silly and it can’t even crack the top 10 on this list, which is a true testament to the film.

The film’s most complicated sequence is relentlessly hilarious. It starts with a smug Smails reading a dumb poem. Then his wife breaks the boat’s bow with a bottle of champagne. Finally Al nearly kills everyone on the water with his giant yacht before dropping his anchor on the Judge’s tiny sloop.

Ty’s Zen putting performance, full of made-up wisdom that sounds real, is amazing. As his his response to Danny’s compliment: “Thank you very little.”

9. The Heavy Stuff Doesn’t Come Down for Quite Awhile

Carl caddies for the Bishop during the best round of the Excellency’s life, which takes place in a storm of biblical proportions. Carl running away from the blasphemous Bishop after he’s struck by lighting could also count as its own top moment.

The Baby Ruth in the pool Jaws homage is iconic, but the whole sequence goes to another level when Carl eats the specimen in front of Mrs. Smails. “It’s no big deal,” but it is unbelievably funny.

Rodney Dangerfield’s first appearance brings down the house, topped off by when he accidentally insults Smails’ hat: “Oh, this is the worst-looking hat I ever saw. What, when you buy a hat like this I bet you get a free bowl of soup, huh? … Oh, it looks good on you, though.”

6. Al Livens Up the Party

Yet somehow Al tops his first scene by stepping on a duck during a stuffy black-tie party. He then turns the event into a parade of great one-liners. He insults everyone and everything, like when he asks Mrs. Smails, “You want to make $14 the hard way?”

Chevy Chase and Bill Murray, who had fought backstage at SNL years earlier, get one absurd scene (that makes no sense plot-wise) together, and it’s fantastic. For the record, Carl probably needed the pool and the pond.

You know, I’m not positive it actually was broken….

Carl lives out his golf fantasy while destroying some flowers, in one of the film’s most popular, and most frequently quoted, scenes.

Ted Knight was a comedic genius, one of the best ever. He’s monstrously funny here when he pulls out his trusty special putter and after he sinks the shot.

No moment better captures everything great about Caddyshack than a comedy legend at his best giving a ridiculous, perfectly delivered speech that is totally unrelated to the plot. It’s just funny for the sake of funny. And 40 years from now, the movie will still have that going for it.