We take a lot of the medical field for granted at this point. Doctors, if you allow them to, are very good at determining what ails us and get us on the mend. This didn’t just happen; it took years and years of research and experimentation to get to this point. In the 1820s, Edinburgh, Scotland, was at the forefront of this work. Advancements came fast and furious and to facilitate this, the researchers needed bodies upon which to perform this research. This need led to one of the most infamous series of murders of the Victorian Age, and made the names Burke and Hare perfect fodder for horror films.

William Burke and William Hare were Irish immigrants living in Edinburgh who began work as “Resurrection Men” for Dr. Robert Knox in the prestigious Royal College of Surgeons of Edinburgh. Due to some unscrupulous practices, Knox would pay for corpses upon which to perform this anatomical research. The idea, apparently, was that these would only be the bodies of vagrants who died in the street; rather than bury them in a Potters field, Knox would pay for the use of the cadaver. That’s how it started. 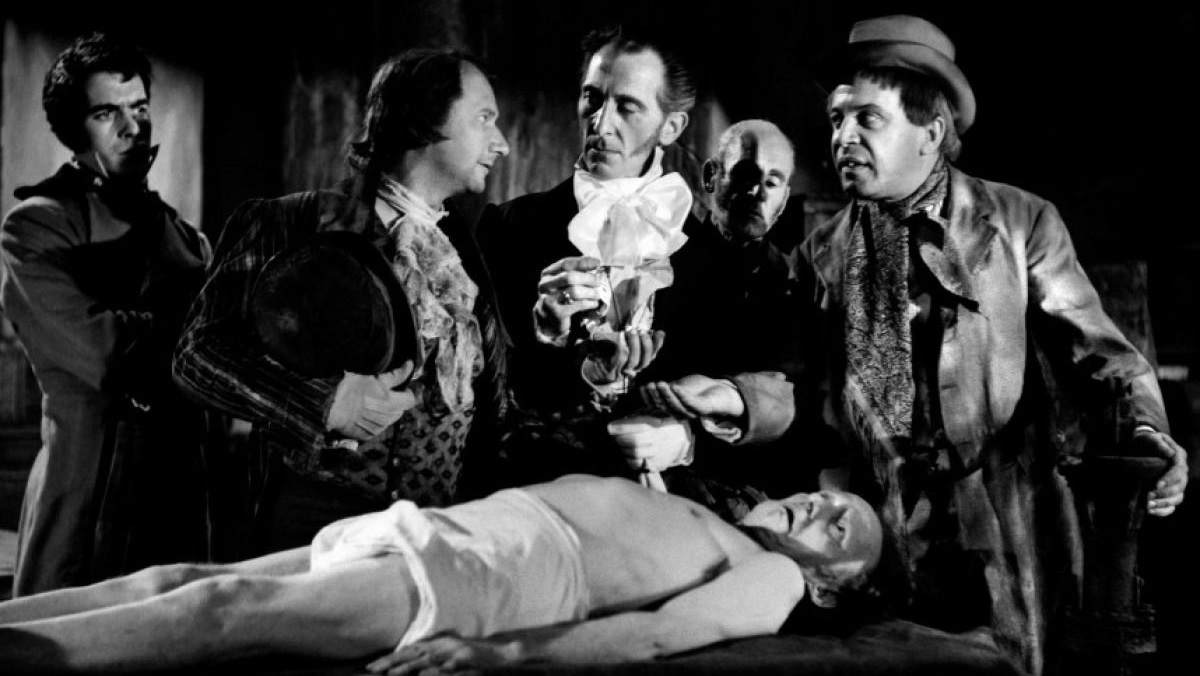 Burke and Hare began digging up the bodies of recently buried people (hence the term “Resurrection Men;” the bodies rose from their graves) and sell those bodies to Knox. After a while, when there weren’t enough newly buried bodies to dig up, the pair got the wacky idea to cut out the middleman. In total, Burke and Hare faced charges of murdering 16 people to sell to Dr. Knox, who knew how the victims died and paid for them anyway. Hare, the apparent mastermind of the scheme, testified against Burke, who physically performed the bulk of the killings. Burke hanged while Hare got off without jail time.

The tawdry, seedy story of Burke, Hare, and Dr. Knox has been dramatized many, many times over the years. There’s something about the Victorian-era setting, the rather jovial, gallows-humor attitude of Burke and Hare, and the ghastly circumstances that have kept people engaged all these years. Poet and novelist Dylan Thomas wrote an unproduced screenplay called The Doctor and the Devils in 1953. That story changed the names of those involved but kept just about everything else.

The first film on the subject was 1945’s The Body Snatcher produced by the legendary Val Lewton and directed by Robert Wise. Though loosely adapted from Robert Louis Stevenson’s 1884 story of the same, the movie all but celebrates the legacy of Burke and Hare. Boris Karloff plays Cabman John Gray, a nasty sort of fellow who sells bodies to Dr. Macfarlane (Henry Daniell) as a sort of continuation of the B&H murders. Gray doesn’t just murder and grave-rob, he extorts and torments Dr. Macfarlane all while evoking the memory of Burke and Hare every step of the way. 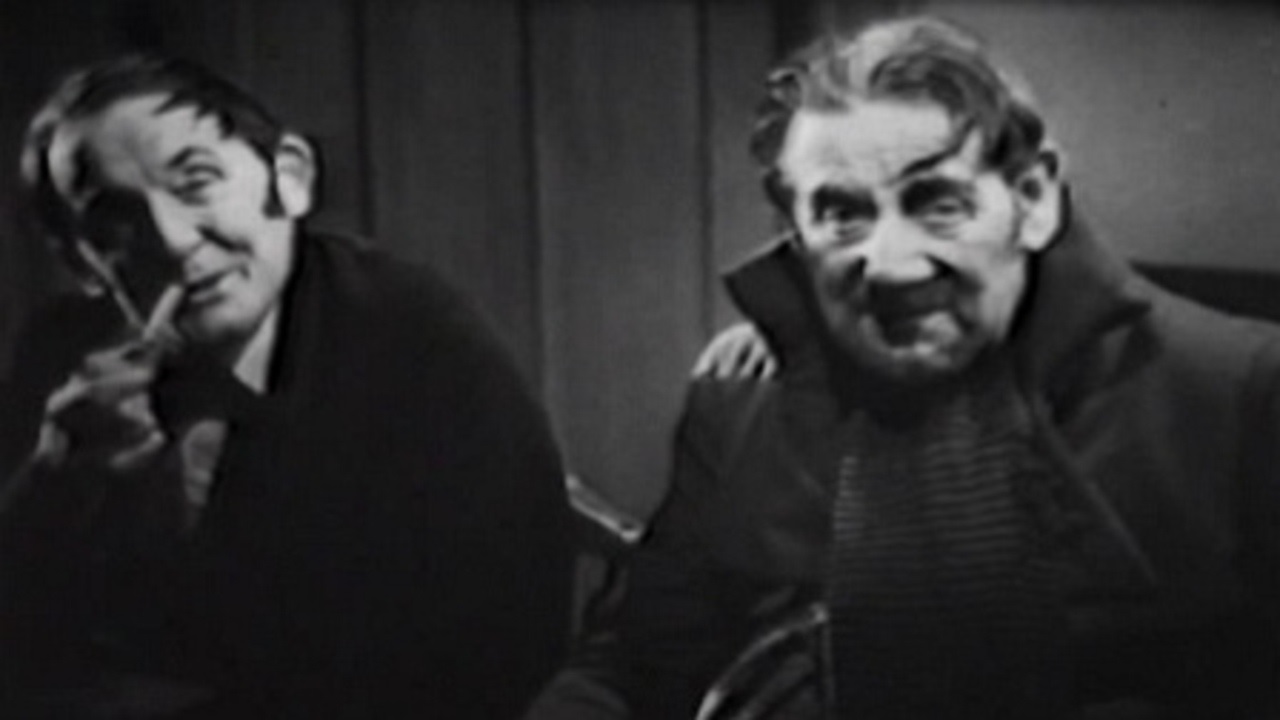 Though The Body Snatcher doesn’t actually feature our pair of murderers, their spirit looms large in the background throughout. Three years later, the pair sort of came to the screen in director Oswald Mitchell’s Horror Maniacs, aka The Greed of William Hart. In this movie, Burke and Hare become Moore and Hart, and Dr. Knox becomes Dr. Cox. Big stretch there. Well, in fairness, the movie originally did feature Burke and Hare by name. They even filmed it that way. But upon release, the British censors decided it was too soon (…120 years seems like plenty to me) and so the names were changed and redubbed.

Horror Maniacs isn’t a very good movie, it must be said, and it didn’t do very well at the time. But that movie’s failure led to its screenwriter, John Gilling, remounting the film in 1960. Having established himself as a director in the late-’40s and ’50s, Gilling got to make the movie he wanted. That movie would end up as, to date, the very best adaptation of the story: The Flesh and the Fiends. Released as The Fiendish Ghouls in the US.

You can’t do much better in the casting department than The Flesh and the Fiends. Peter Cushing plays Dr. Knox with a detached erudition. He’s a visionary of medical science; who cares how he gets his research done? Donald Pleasence plays Hare with a gleeful, boyish exuberance that’s truly off-putting. (This is, of course, because Pleasence is always off-putting in any role.) Opposite him is George Rose as Burke, who definitely comes across as the greedy rube of the pair, easily manipulated by Hare’s machinations and his wife (Renee Houston)’s love of all the money they’re making.

Gilling portrays Edinburgh much as it was, a city of two halves. All the poor and “disreputable” live on one side of town while the more posh and wealthy lived on the other. Burke and Hare are very much the lowest of the low on the totem pole in Edinburgh but we see their eventual rise to the flashy high-rollers of the poor, grubby city. The Flesh and the Fiends also gives us a pair of star-crossed lovers in the form of Knox’s young student Chris (John Cairney) and local barwench/prostitute Mary (Billie Whitelaw). Things do not end well for either of them. And though these characters have no basis in history, their archetypes would appear in all future versions of the story. 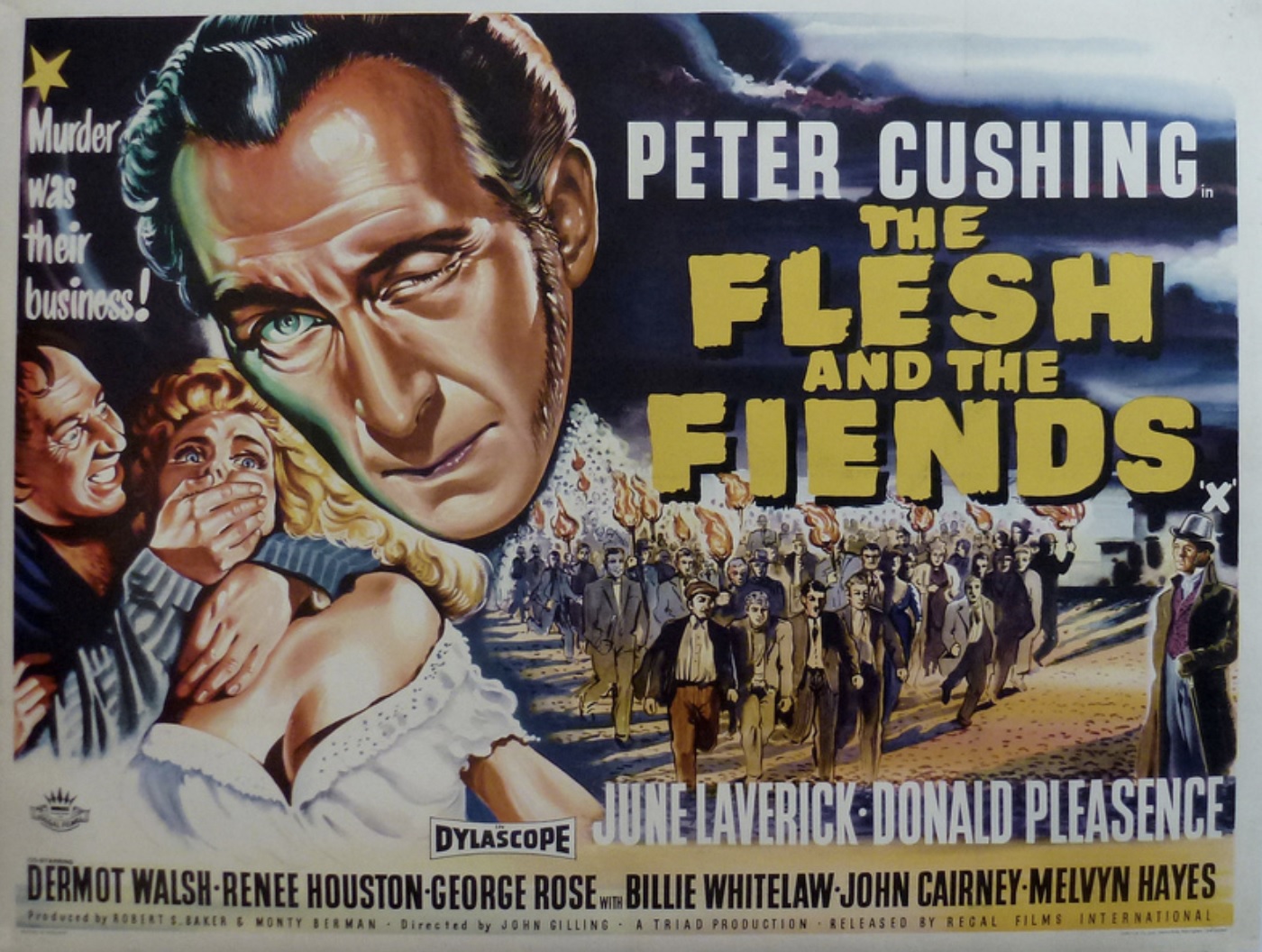 The Flesh and the Fiends succeeds so well because of its perfect, oppressive macabre atmosphere. Old Town Edinburgh feels like an absolute hellscape to begin with, but add to it giggling gravediggers who figure out it’s easier to kill people than dig them up and you have something truly ghoulish. While this isn’t one of Cushing’s flashiest roles, his version of Knox feels the most complicit and somehow most sympathetic. He’s doing these things for the betterment of science, after all. The movie even ends with his class giving him a standing ovation.

The next Burke and Hare move would be the aptly named Burke & Hare from 1972. It’s a weird one. The director, Vernon Seward, had worked in the British film industry since the ’30s. Toward the end of his career, he directed a trio of not-great horror movies including The Blood Beast Terror (1968) and Curse of the Crimson Altar (1968). Burke & Hare was to be his final film, a definite attempt to blend the macabre aesthetics of the British horror boom that began with Hammer with the burgeoning sex comedy, a-la the Carry On films.

It doesn’t help that this movie has music right out of a sitcom and a ridiculous theme song, warning that the pair are “out to snatch your body from you.”

It’s a good looking movie for what it is, and it has decent if unremarkable performances, but the unevenness in tone (is it horror or comedy? Because it’s never both) doesn’t do it any favors. However, inexplicably, this is the one that proves to be the most historically accurate, at least with regard to the pair’s actual “business” acumen. We get to see roughly the recorded events of the murders play out in between bawdy trips to brothels. Perhaps notable only for that.

As I previously mentioned, poet Dylan Thomas wrote a screenplay in 1953 that was, eventually, produced by, of all people, Mel Brooks. In the 1980s, Brooks’s Brooksfilms company produced a number of different kinds of movies, besides the comedies you’d expect. They produced David Lynch’s Oscar-nominated The Elephant Man in 1981 and would go on to produce David Cronenberg’s The Fly in 1986. In ’85, though, Freddie Francis—longtime horror director and award-winning cinematographer—directed The Doctor and the Devils, which changes the names of the characters but keeps the events.

With this movie, the story goes right back to Gothic horror in a pretty outstanding way. Timothy Dalton plays Dr. Rock, the brilliant anatomist who will pay a small fortune for corpses, the fresher the better. The Burke and Hare analogs are Fallon (Jonathan Pryce) and Broom (Stephen Rea) who are, if possible, the most detestable versions of the characters to date. The supporting cast are all pretty amazing, with the likes of Patrick Stewart, Twiggy, and Julian Sands. There’s no wisp of the comedic here; this is a chiller.

Which cannot be said for the final film to date, 2010’s Burke and Hare. On paper, this should have been perfect. John Landis (An American Werewolf in London) directing a horror-comedy again, with Simon Pegg and Andy Serkis as the titular fiends, and Tom Wilkinson as Knox. The problem here is in execution. Focusing almost solely on the “hapless” William Burke (Pegg) who gets steamrolled into committing these heinous acts by his harlequinesque cohort William Hare (Serkis). All seemingly stemming from Hare turning Crown’s evidence against Burke.

But it’s not all that funny, and even with Pegg’s likability, any foreknowledge of the crimes makes it very hard to like him. Produced by the legendary Ealing Studios, it seemed an attempt to replicate the famous wry dark comedies from the 1940s. But it…doesn’t.

Even with the bad final movie, the legacy and legend of Burke and Hare remains one of Britain’s most notorious, even among the likes of Jack the Ripper and Mary Pearcy. The Flesh and the Fiends is available now on Blu-ray from Kino Lorber while The Body Snatcher and The Doctor and the Devils are on Blu-ray from Shout! Factory. If you’re going to watch any movies about the famous Resurrection Men, those would be where to start.