BLEED WITH ME Puts Friendship to the Deadly Test - Nerdist

BLEED WITH ME Puts Friendship to the Deadly Test

Most of us here in North America have been in various stages of isolation for going on six months. When it’s just you, or just you and one other loved one, it’s easy to feel trapped. Your mind starts to wander as you look at your quarantine mate. Are they weird? Are they doing something strange? Or have I just been alone with my thoughts for too long? It’s into that kind of mindset that Amelia Moses’ new film Bleed with Me fits perfectly. With its three-person cast, the movie deals with paranoia, distrust, hallucinations, and also, maybe, blood stealing. Maybe.

Premiering Wednesday night as part of the virtual Fantasia Film Festival 2020, Bleed with Me is that very particular kind of nightmare where everything seems at once totally believable and completely outlandish. From moment to moment, Moses keeps the audience unsure about whether the lead character’s fears are justified. They could be merely dreams blurring with wakefulness. It keeps us guessing all the way until the muted gut-punch of a final shot.

Lee Marshall plays Rowan, a troubled young woman who goes to stay with her seemingly perfect best friend Emily (Lauren Beatty) and Emily’s boyfriend Brendan (Aris Tyros) in a cabin the snowy Canadian mountains. Right from the get-go, we’re privy to Rowan’s almost fanatical gaze at Emily. Emily appears to have her life completely together, has a great partner, and is everything Rowan wishes she were. Then Rowan begins having nightmares where Emily is stealing her blood and drinking it. When she awakens, she finds slash marks on her arms. But given Rowan’s past, she could easily have done this herself. Rowan becomes ill and feverish, and though Emily says she wants to help, because we’re in Rowan’s point of view, her kindness seems sinister. 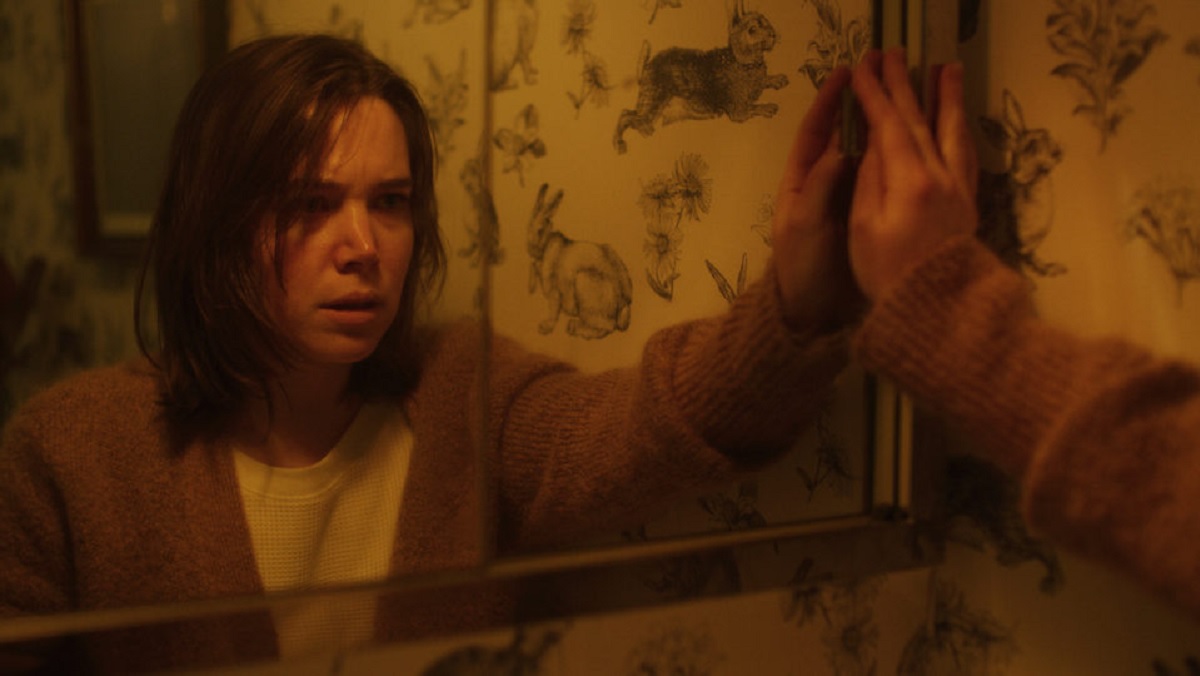 A stripped-down movie that at 79 minutes is nowhere near overstaying its welcome, Bleed with Me plays with the idea of trusting your own memories and the evidence of your own senses. We question reality as often as Rowan does, and from scene to scene we’re unsure if Emily is indeed a concerned friend or a malicious, vampiric presence, leeching off of Rowan’s weakened state. These themes go in a Lynchian direction while maintaining the relative realism of the presentation. There are no indicators of whether the horrific actions are true or just a dream. Rowan herself isn’t sure; Emily could be cold and calculating, or she could just be dealing with her own shit.

If anything, I wish the movie had been a bit longer to explore these themes and heighten the sense of unease even more. Ratchet up the tension even further. We don’t quite get to the point where it feels like Rowan has no way out, and I wish we did. But as it stands, Bleed with Me is still an effective, no-frills character study bolstered by two amazing performances and some upsetting and unbalancing visuals.