After an unplanned year off, the MCU returned in 2021 a big way: with three original shows on Disney+. Now the Marvel Cinematic Universe is ready to head back to the big screen, with Natasha Romanoff’s standalone prequel, Black Widow. It comes to theaters and Disney’s streaming site July 9. Will it be worth the long, long, long wait fans have endured? Both since the character entered the MCU and since her solo movie’s release date was delayed? Based on the film’s first reviews, the answer is mostly a yes, even if not everyone thought it was a perfect farewell to Natasha.

Here at Nerdist, our own Lindsey Romain says the movie is unlike other standalone MCU installments, and that’s a big reason why it’s one of the franchise’s best.

“Black Widow may not feel all that consequential in the grand scheme of things. Natasha is dead, after all. But director Cate Shortland and storytellers Jac Schaeffer, Ned Benson, and Eric Pearson did a lot to make this one special. Its ‘girl power’ spirit never feels manufactured and its message for survivors is a powerful through-line. Black Widow proves that the MCU can scale down when it needs to, which is a card trick more valuable than one might think. Natasha may be dead, but Black Widow shows how powerfully her legacy lives on.”

IGN‘s Nicole Clark also thinks Black Widow is a standout standalone because it breaks from the typical MCU formula. It delivers a personal tale of family and tragedy that gives more depth to one of its oldest and most important characters.

“The film is, in a word, ambitious. It’s a superhero flick but also an espionage action-thriller, a dysfunctional family drama, a send-off, and overwhelmingly, a film about recovering from abuse. Much of it doesn’t feel like a Marvel film at all, thanks to the darker tone used to tell the story of a Russian program that kidnaps young girls and trains them to become assassins. There isn’t a catalyzing event that gave Natasha superpowers — no radioactive spider bite or gamma bomb. And Natasha already defected to S.H.I.E.L.D., though viewers will get clarity on why she joined in the first place. The film centers on affirming why she continues on the path of heroism, beyond just escaping the confines of her past life. Though it resolves on a hopeful note, it leaves an aftertaste of intense tragedy for one of Marvel’s original Avengers.” 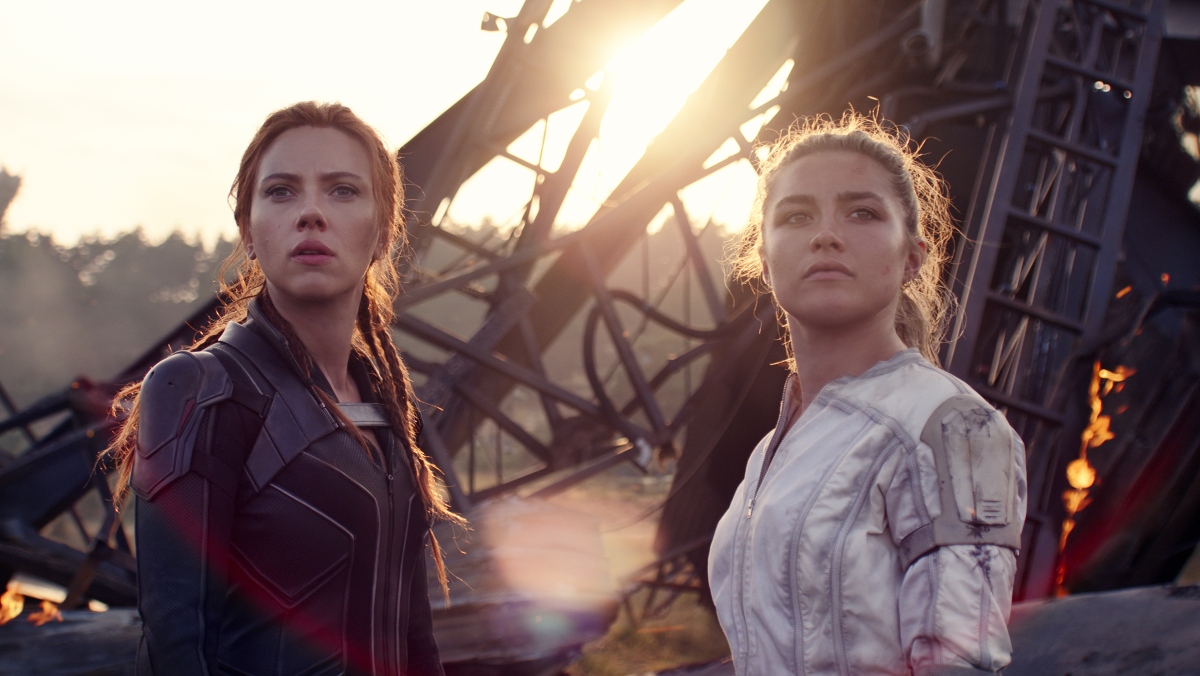 Mae Abdulbaki at Screen Rant writes that the film mostly delivers, but that Florence Pugh’s Yelena steals the spotlight from its title character.

“The film is set up as more of an ensemble than a solo outing. The audience is barely given any time with Natasha before she is thrown into the action, with Black Widow shaping the story more so around Yelena’s origin and going so far as to focus more on her feelings surrounding the only family she’s known, as well as her fight against Dreykov. There are even comparisons made as to who had it worse in the Red Room — Yelena, who was chemically subjugated, or Natasha, who was indoctrinated through old-fashioned brainwashing. The film certainly finds time to focus on the bond Natasha and Yelena have as sisters, but the story does shift to center on Yelena a lot, often overshadowing her big sister in the process.”

David Rooney of The Hollywood Reporter praises the espionage thriller as a satisfying female-led entry that also looks and sounds great.

“On the craftsmanship side, Black Widow is top-notch, with muscular camerawork from Gabriel Beristain and a wonderful score by Lorne Balfe that ranges from gentle piano to high-intensity suspense and almost into the operatic as it incorporates stormy choral elements. The editing of the fight scenes is perhaps a touch too unrelentingly fast, often blurring the choreography, but the physical side never feels overwhelmed by CG enhancement.”

Amelia Emberwing at What to Watch thinks the film would have worked better five years ago, but that it still has a lot to offer.

“All told, Black Widow is a strong entry into the MCU’s cannon. It should have come earlier, and it would have been improved if the creative team didn’t have mouse-ear muzzles keeping them from the true horrors of the Black Widow program, but there’s a lot to love otherwise. The character deserved her moment in the sun, and she got it. As for Yelena? Well, we’ll be seeing a lot more of her in Hawkeye.”

At The A.V. Club, A.A. Dowd thought certain aspects of the movie worked, ultimately it didn’t quite go as far as it needed to.

“The film’s mandated collision of snark and somberness is sometimes uneasy: This is a four-quadrant event picture about trauma and guilt and child soldiers that’s also a glib wisecrack machine. At its center is a character who stubbornly refuses to shift fully into focus. ‘We’re both killers,’ Elena tells Natasha, undercutting her delusions of growth and atonement. ‘You’re just the killer that little girls call their hero.’ It’s a provocative line of thinking that the movie can’t resolve. Romanoff’s arc across these films has been a search for some way to erase the “red from her ledger”—an iconic line that gets a callback punchline here. In fashioning a side adventure that’s really a formal goodbye to one of the franchise’s original principles, Black Widow ties a neat bow on that motivation, offering redemption that feels half-earned at best.” 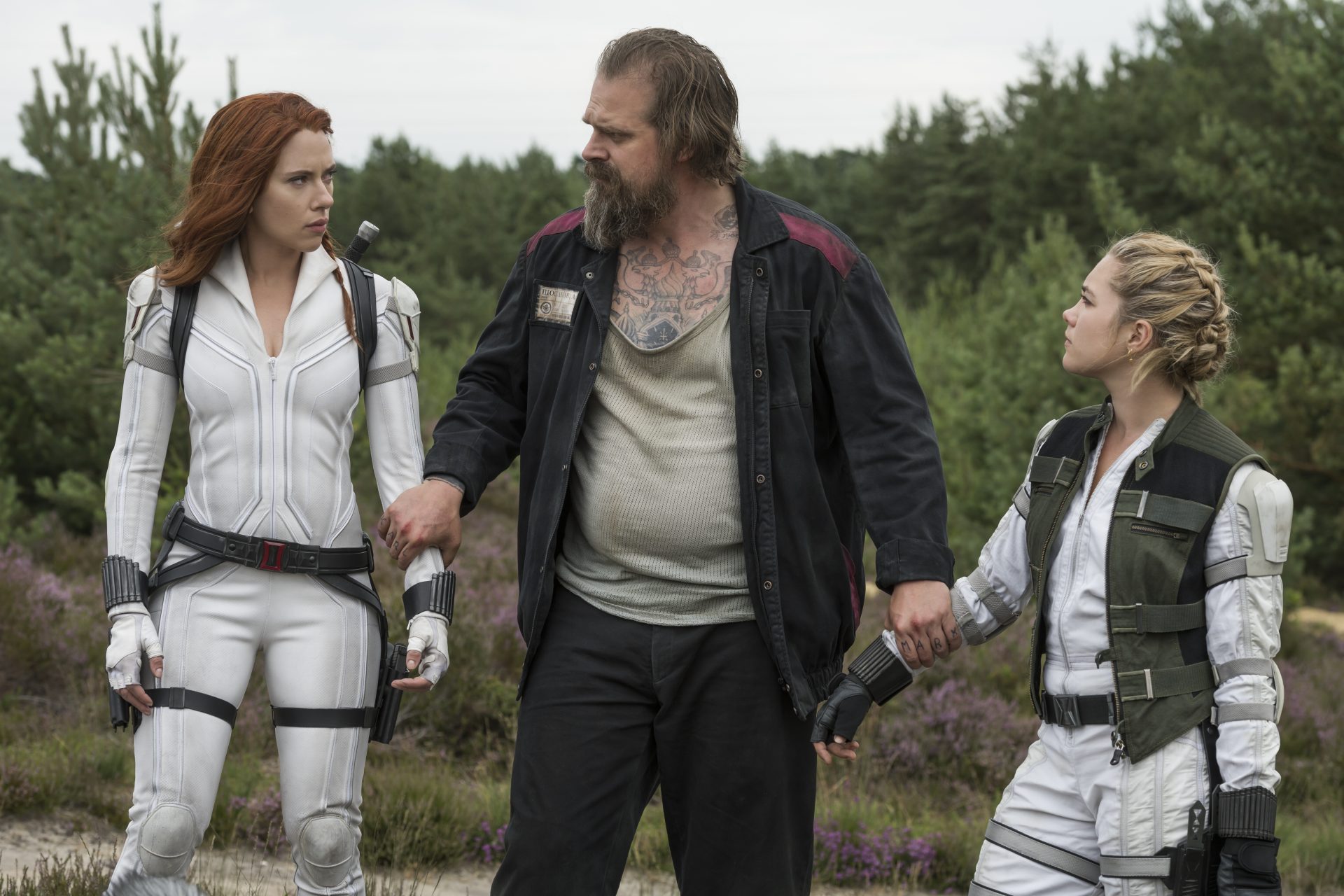 “Johansson is again a great presence in the role, showing expert action and acting chops throughout, while Pugh is clearly ready to lead her own franchise after this MCU debut. (Rachel) Weisz is simply such a good actor she can even make some of the more ridiculous dialogue land, and (David) Harbour, tatted to the hilt, is clearly having a blast overplaying every moment of a character designed to think only about himself. For me though ,just having Winstone in this picture lifts it several notches, and he is deliciously fun and scarily authentic as the villain of the piece.”

Variety‘s Owen Gleiberman says the film’s star is the bind that makes this family story of international intrigue work.

“But it’s Scarlett Johansson who holds the film together and gives it its touch of soul. Natasha’s desire for vengeance is pulsating, but so are her inner wounds, and Johansson, unusual for the comic-book genre, makes the most vulnerable emotions part of the humanity of her strength. “ 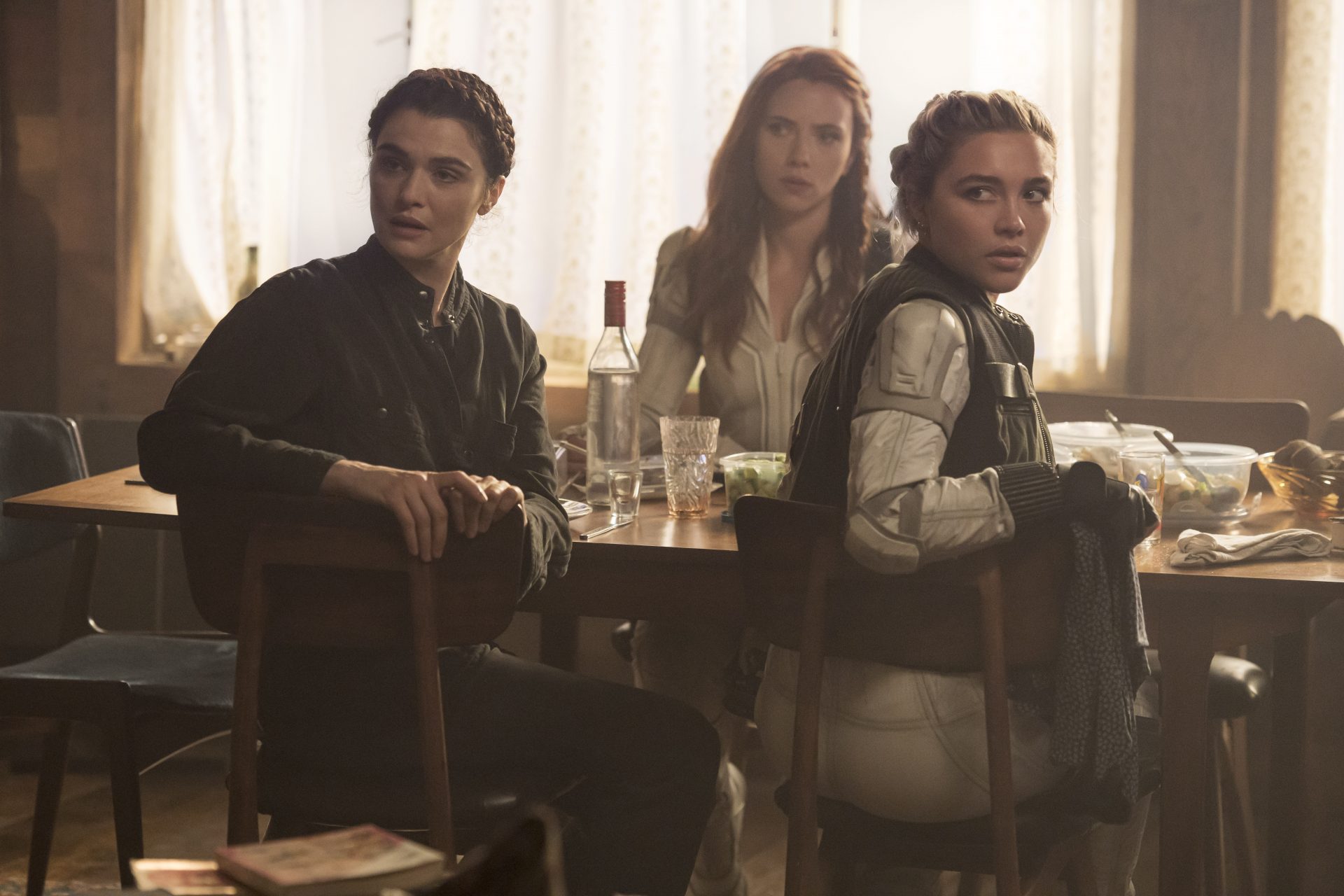 But not everyone loved the film. Hoai-Tran Bui of /Film says the big wait ended with a big disappointment.

“While Black Widow starts off strong, kicking the action off with a dark, propulsive mystery that promised to unearth long-awaited revelations about both Natasha’s character and her past, the last half of the film completely squanders it. Natasha assembles her own misfit group of allies to take down the Red Room, crowding the screen again and unwittingly becoming a supporting player in her own movie. While the twisted found family dynamics between Natasha, Yelena, and their traitorous ‘parents’ are a wonderful showcase for all four extremely talented actors, Black Widow feels like it misses the chance to give Natasha her due.”

Sounds like Black Widow may not be a perfect film, but one that will still make many Marvel fans happy.