Horror and Sci-fi Movies Have the Best Makeup Effects - Nerdist

Horror and Sci-fi Movies Have the Best Makeup Effects

Although makeup has a long history in cinema (see Lon Chaney, all the Universal Monster films), the Oscar category for Best Makeup was not created until 1981. Prior to its creation, two make-up artists received honorary Oscars for their groundbreaking work: William J. Tuttle for 7 Faces of Dr. Lao (1964) and John Chambers for Planet of the Apes (1968).  After the release of David Lynch’s The Elephant Man received no such honor for Christopher Tucker’s work, the Academy received so many complaints they created the category the next year. Since then genre films, like David Cronenberg’s The Fly which celebrates its 35th anniversary this year, have won more than half the awards in this category. 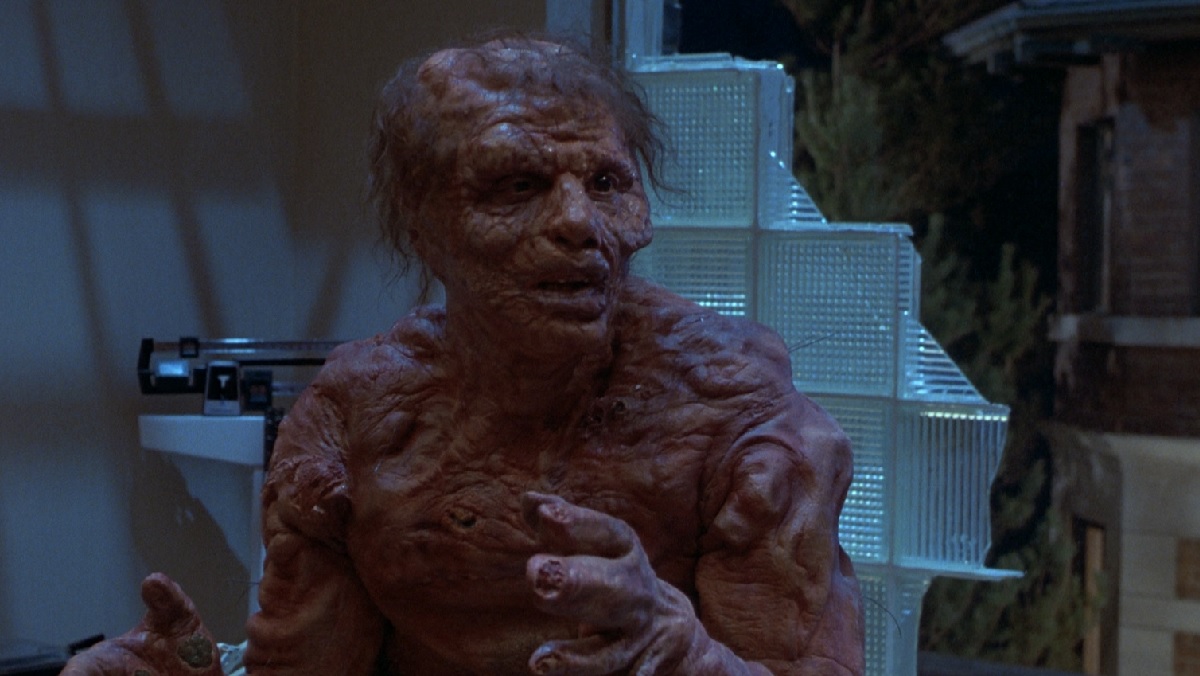 An American Werewolf in London (1981)

The inaugural award went to Rick Baker’s stunning practical makeup effects that not only allowed Griffin Dunne’s head to slowly decompose, but transformed David Naughton into a werewolf before our very eyes. Baker told me when I interviewed him in 2012 that director John Landis had envisioned a “transformation in a way that it hasn’t been done. . .Show the pain.” Baker holds the records for nominations (11) and wins (7) in this category.

A loose adaptation of the 1911 Belgian fantasy novel by J.-H. Rosny, makeup artists Sarah Monzani and Michèle Burke used their skills to turn stars Everett McGill, Amoukar Nameer El-Kadi, Rae Dawn Chong, and Ron Pearlman into early Paleolithic Europeans known as Ulam, whose small flame as been extinguished after a battle with the ape-like Wagabu tribe. Star Ron Pearlman told Variety he has no qualms wearing heavy makeup because, “the roles I was playing as a result of all that work in the chair were phenomenal.”

Based on the short story by George Langelaan, earlier made into a film in 1958, Crobenberg’s take brought it into the world of body horror. His grotesque vision for Jeff Goldblum’s half-man, half-fly was brought to life by the team of Chris Walas and Stephan Dupuis. On a DVD extra, Walas says he told Cronenberg to “get somebody with no ears and no bridge of the nose so that way we have a lot more control with the makeup.” Each day before filming Goldblum spent 5-hours in the make-up chair. It remains the only Oscar win for a film directed by Crobenberg.

Rick Baker received his second win in the category for designing the make-up and suit effects that turned Kevin Peter Hall into the seven-foot tall Bigfoot named Harry. When portraying the missing link Hall wore a thick latex mask devised by Baker. Harry was a mixture of puppets, as well as a radio-controlled animatronic version of the mask.

Designing the ghost with the most, the team of Ve Neill, Steve La Porte, and Robert Short used a mixture of makeup, prosthetics, false teeth, and wigs to turn Michael Keaton into the iconic titular character. While also designing the looks of various characters in the waiting room of the netherworld, including my faves the magician assistant who was sawed in half and Miss Argentina (Patrice Martinez). Neill would go on to win three more times, and rack up eight nominations in total.

Based on the comic strip created by Chester Gould that debuted in the Detroit Mirror in 1931, the team of  John Caglione Jr. and Doug Drexler won for bringing director Warren Beatty’s larger than life vision for these characters to life. Unconfirmed rumors abound that Al Pacino designed the looks for his character Big Boy Caprice himself. Caglione Jr. later received another nomination for The Dark Knight, where his lowkey take on the Joker married perfectly with Heath Ledger’s Oscar-winning performance.

Stan Winston is a bit of a jack of all special effects trades, receiving nominations and wins in both the make-up and visual effects categories. He’s been nominated a total of nine times split between the two categories, with four wins – two of which he received for his work on this film. On the website for the Stan Winston School of Character Arts, you can learn all about how he crafted the looks for both Arnold Schwarzenegger’s Terminator and Robert Patrick’s T-1000.

Previous winners Rick Baker and Ve Neill teamed up, along with and Yolanda Toussieng, to bring to life the amazing story of cult filmmaker Ed Wood’s career as he worked with horror icons Bela Lugosi (Martin Landau) and Maila Nurmi / Vampira (Lisa Marie) on films like Plane 9 From Outer Space (1957). In a making-of doc, Baker says read in the trades that Tim Burton was making the film, and wrote a letter telling him he had to do the film, even if it were for free.

Rick Baker won his fourth award in the category along with David LeRoy Anderson, for his transformative work on Eddie Murphy – who played seven characters in this remake of the 1963 film starring Jerry Lewis, which in turn was a parody of the 1886 novella The Strange Case of Dr. Jekyll and Mr. Hyde by Robert Louis Stevenson. Baker used plaster as well as silicon to create the suits for Murphy’s various looks in the film.

The duo saw themselves back up on the podium the very next year as their work crafting an entire world of aliens in Barry Sonnenfeld’s loose adaptation of Lowell Cunningham and Sandy Carruthers’ comic book series. For some of the aliens they debated creating completely animatronic creations, but Baker felt that you’d get a better performance if a person actually played them. His team worked for 10 months on the prosthetics for the film.

How The Grinch Stole Christmas (2000)

You may be seeing a trend here, as Rick Baker, this time with partner Gail Ryan, received the award for their work turning Jim Carrey into the titular character in Ron Howard’s adaptation of the 1957 Dr. Seuss classic of the same name. Howard called Baker to create an entire world using makeup effects because he was the best. Although Baker knew exactly how he wanted the Grinch to look, he and Howard spent months developing the looks of the Whos.

Weta Workshop founder Richard Taylor, set out to create as detailed a world as he could for Peter Jackson’s epic J.R.R. Tolkein trilogy. For his efforts he won four Oscars – two for make-up, one for costumes, and one for visual effects – plus a fifth for his visual effects work on Jackson’s take on King Kong (2005). Make-up-wise, he won along with Peter Owen for 2001’s The Fellowship of The Ring and Peter King for 2003’s Return of the King. Weirdly, his work on the second film in the trilogy, The Two Towers, was not nominated.

Transforming Jim Carrey seems to be a lucrative art. The team of Valli O’Reilly and Bill Corso won for their work turning the actor into the villainous Count Olaf, stage actor and master of disguise, who torments protagonists Violet and Klaus Baudelaire (Emily Browning and Liam Aiken). Carrey transforms into two other distinct looks as Olaf attempts various disguises, including nebbish herpetological assistant Stephano and the grizzled, peg-legged Captain Julio Sham. Corso first worked with Carrey on the film Man on the Moon, with the two forming a creative partnership that spans eleven films.

The Chronicles of Narnia: The Lion, the Witch and the Wardrobe (2005)

Howard Berger has worked on over 200 films in his nearly five-decades long career. He won an Oscar along with Tami Lane for their work on Andrew Adamson’s adaptation of C. S. Lewis’ beloved classic novel. Among their many feats, the duo turned James McAvoy into a hot faun named Mr. Tumnus and Tilda Swinton into a terrifyingly icy White Witch with a penchant for Turkish delight candy.

Spanish make-up artists David Martí and Montse Ribé took the prize for their collaboration with Guillermo del Toro on dark fantasy set in Spain five years after the Spanish Civil War. The two created creatures like the Faun and the Pale Man (both Doug Jones) that ten-year-old Ofelia (Ivana Baquero) encounters as the fairytale world collides with her own stark reality. Of his work with prolific prosthetics-wearing actor Jones, GDT said, “He was the only guy handling the suits who was really, really preoccupied with imbuing these things with character.”

The Curious Case of Benjamin Button (2008)

Directed by David Fincher and loosely based on a 1922 short story by F. Scott Fitzgerald, Greg Cannom won his third of four Oscars for his hair and makeup work that helped the titular Benjamin Button (Brad Pitt) age backwards, from an old man to a young baby. Although the film is known for its groundbreaking VFX, it was actually Cannom’s make-up designs, which he spent 18 months on, that were developed first, then augmented by the visual effects team. After the initial design process, Cannom told Variety they did “intense tests for two weeks before shooting and started off with every age, and just did makeup after makeup. The makeup had to work or the film wouldn’t work.”

While J.J. Abrams brought Gene Roddenberry’s original Star Trek characters back to the bigs screen like Captain Kirk (Chris Pine) and Spock (Zachary Quinto), the team of Barney Burman, Mindy Hall, and Joel Harlow won the Oscar for their work on Romulan villains Captain Nero (Eric Bana) and Clifton Collins, Jr. (Ayel). According to Harlow, Abrams wanted to show a different version of Romulans than had previously been seen. They team went through six different makeup tests for Nero alone before landing on an approved aesthetic. Sadly, their work turning Victor Garber into a Klingon was left on the cutting room floor, though it is available as a deleted scene on the DVD.

Rick Baker is back, baby! For his work on this title Baker told me he was inspired by the work of Jack Pierce, whose credits include the original Dracula, Frankenstein, Mummy, and Wolf Man films. In transforming Benicio Del Toro into the Wolf Man, he used “a lot of loose hair – yak hair – that was hand glued onto his face.” The old school techniques paid off, with Baker receiving his 11th nomination and 7th win for the film. In the decade since, however, he’s slowed down, only working on two films – Men in Black 3 (2012) and Maleficent (2014), neither of which received nominations.

Witness! After a slew of dramatic star transformations took the top prize, genre make was back in full force with George Miller’s bombastic return to the world of Mad Max. The team of Damian Martin, Lesley Vanderwalt, and Elka Wardega won for their work transforming a cast of gorgeous actors like Charlize Theron, Tom Hardy, Nicholas Hoult, Riley Keough, and Zoë Kravitz into dust-worn, post apocalyptic road warriors. Vanderwalt told the New York Times they tied the style of their make-up designs to the story because these characters “had nothing but the materials around them, which would have been grease from the mechanical stuff they were building or clay from the ground.”

It’s true, David Ayer’s much-maligned contribution to the DCU is an Oscar winner. Hair and make-up trio Alessandro Bertolazzi, Giorgio Gregorini, and Christopher Nelson brought home little gold men for their unique take on the classic characters, including Jared Leto’s face-tattooed Joker and Margot Robbie’s truly iconic interpretation of Harley Quinn. For Leto’s character, they partnered with Toronto-based tattoo artist Rob Coutts, whose important contributions to the film’s look and style was actually not lauded along with the makeup team by the Academy.