BARTON FINK and the Real-Life Writers Who Inspire Its Story

While working on their 1990 gangster epic Miller’s Crossing, the Coen brothers went through writer’s block. Desperate to work through it, they wrote one of their most acclaimed films: Barton Fink, which hit theaters on August 21, 1991. The creative duo penned the titular character, a struggling writer in 1940s Hollywood, specifically for star John Turturro. This exercise paid off big time. The film came to the Cannes Film Festival, where it won awards for Best Director, Best Actor (Turturro), and the Palme d’Or, a rare sweep. Despite its laurels, Barton Fink was a box office bomb. This ironically fits perfectly into its metatextual nature.

Turturro stars as the titular humanist playwright Barton Fink, who is high off his Broadway success. Jack Lipnick (Michael Lerner), the head of the fictional Capitol Pictures, brings Fink to Hollywood to pen films. Struggling to grasp his Wallace Beery wrestling picture writing assignment, Fink languishes in the dilapidated Earle Hotel. That is, until he meets his unruly neighbor Charlie Meadows (John Goodman). Meadows teaches Fink a thing or two about the life of the mind. 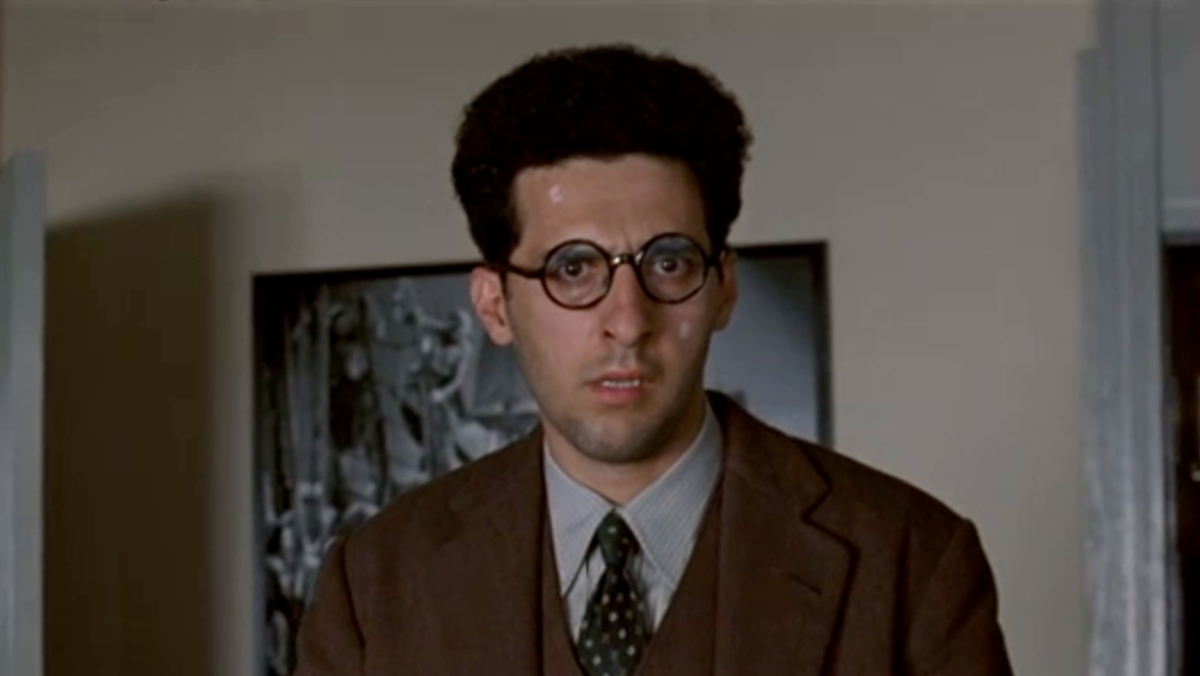 Fink is also drawn into the complex relationship between washed-up alcoholic screenwriter W. P. Mayhew (John Mahoney), who used to be one of the finest novelists of his time, and his secretary-lover Audrey Taylor (Judy Davis). What follows is a Kafkaesque look into the anguish of the writer as an artist, and the controlled chaos that is Hollywood.

The main story, including murder and mayhem, came from the imaginations of Joel and Ethan Coen. But they took notes from real events and people from Hollywood’s classic heyday. Particularly with the characters of Barton Fink and W. P. Mayhew, who draw inspiration from writers Clifford Odets and William Faulkner.

Both writers came to Hollywood in the 1930s; however, the film takes place in 1941. The Coen brothers set Barton Fink just before the bombing of Pearl Harbor because “the world outside the hotel was finding itself on the eve of the apocalypse” yet Fink remains too wrapped up in his own struggle to notice. 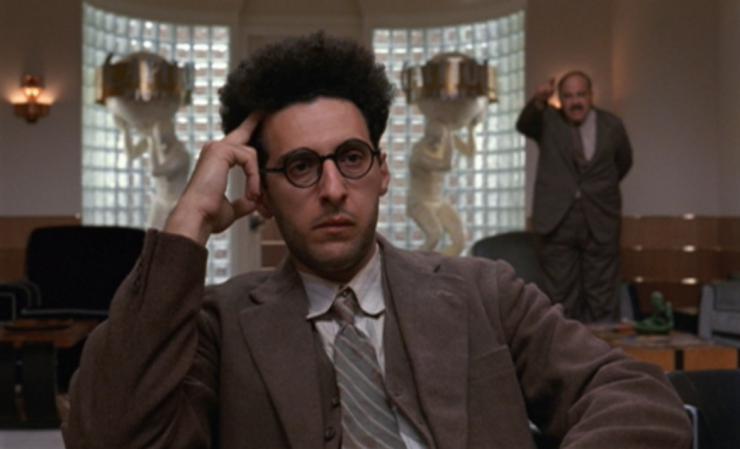 So which elements of Odets and Faulkner’s lives made it into the film? Quite a few, actually. Faulkner rose to fame during the Southern Renaissance, most notably with his novels The Sound and the Fury (1929),  As I Lay Dying (1930), Light in August (1932), and Absalom, Absalom! (1936). He won the 1949 Nobel Prize in Literature for his body of work. Two of his later novels, A Fable (1954) and The Reivers (1962), won the Pulitzer Prize for Fiction.

In 1932, Faulkner signed a contract with MGM for $500 a week, a sum that increased to $1,000 a week by 1936. This is the same amount as Barton Fink’s contract with Capitol Pictures in the film. According to André Bleikasten’s book William Faulkner: A Life through Novels, Faulkner’s literary reputation (not his talent) was the reason for his hiring.

As Fink works on his Wallace Beery film, the producer Ben Geisler (Tony Shalhoub) has him watch the dailies from a wrestling picture written by Faulkner surrogate Mayhew. In fact, one of Faulkner’s earliest screen credits is for a 1932 wrestling picture called Flesh, starring none other than…Wallace Beery. 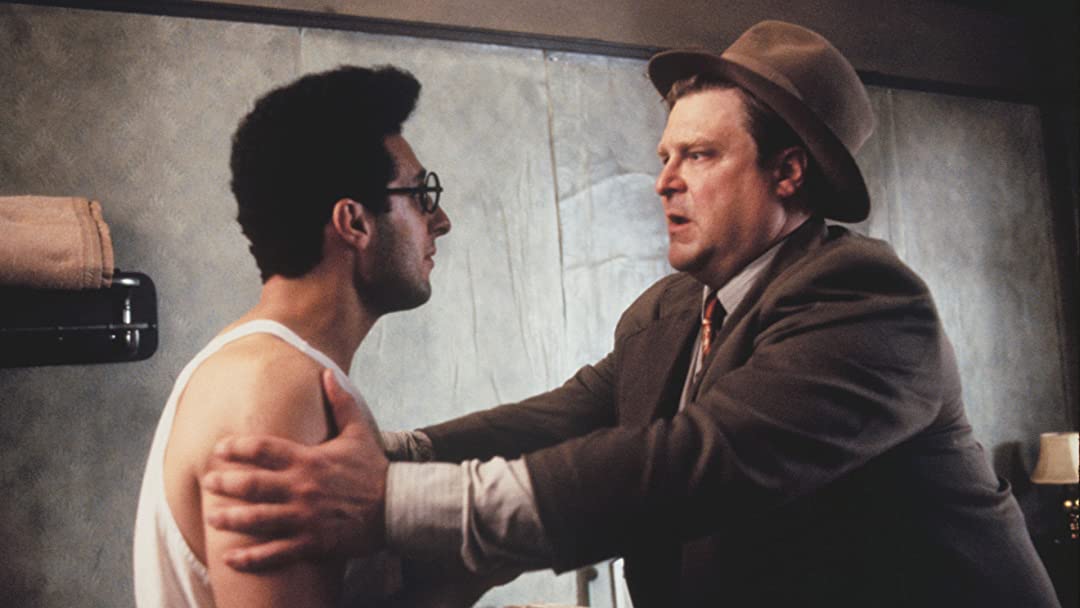 Other aspects of the real Faulkner made it into Barton Fink. He did have an affair with his assistant, real name Meta Carpenter; though she was not murdered. And, Estelle was his wife’s name. She was not mentally unstable as the film implies. But, according to Joel Williamson in his book William Faulkner and Southern History, she did rack up debt in their hometown of Oxford, MS. So much, in fact, that Faulkner ran local paper ads saying he was not responsible for the debts of “Mrs. William Faulkner or Mrs. Estelle Oldham Faulkner.”

Barton Fink implies that alcoholism was a deterrent to his writing. In real life, Faulkner found himself in an easy partnership with director Howard Hawks, working on several of his films including To Have and Have Not (1944) and The Big Sleep (1946). In his paper, The Wasteland Revisited, writer C. J. Bartunek estimates that Faulkner worked on around 50 films between 1932 to 1954.

Just as Faulkner found success in the late-1920s, Odets came to New York to pursue theater. Odets was greatly inspired by seeing the 1926 Broadway production of Seán O’Casey’s Juno and the Paycock. It focused on the plight of the working classes, which became the subject of many of Odets’ early works.

Joining Lee Strasberg’s Group Theater as an actor in 1931, Odets became the first method-trained playwright to have a work produced with 1935’s Waiting for Lefty. Odets’ early plays, as well his work in Hollywood, are known for their distinctive, metaphor-laden dialogue. Similarly, in the film, Lipnick describes Fink’s work as the “poetry of the streets.”

The snippets of his play that open the film, as well as closing dialogue from his screenplay, both mimic Odets’ style. In his 1987 autobiography Timebends, Arthur Miller spoke on Odets’ early works. He said: “For the very first time in America, language itself had marked a playwright as unique.”

Although Hollywood came calling in 1936, Odets’ first produced screenplay, The General Died at Dawn, was not well received. Once the golden boy of Broadway, the headline for the review of the film in the New York Times read “Odets, Where Is Thy Sting?”

Regardless of this cold reception, Odets spent his life between Los Angeles and New York. And, although he worked under contract on many scripts, he declined credit on most of them. In the film, Lipnick rejects Fink’s wrestling picture script. He calls it “fruity” while insisting Fink stay in town and on contract. Lipnick also says none of Fink’s work will see production.

Odets is probably best known for his screenplay adaptation of Ernest Lehman’s Sweet Smell of Success (1957). This is in addition to film adaptations of his plays Golden Boy (1939), Clash By Night (1952), The Country Girl (1954), and The Big Knife (1955), although he did not write their screenplays.

Despite making his career in the 1930s as a leftist, when called before the House Committee on Un-American Activities in 1952, he named the same names as fellow Group Theater alum Elia Kazan. In his biography A Life, Kazan wrote that they agreed to name each other before facing the HUAC.

Fink espouses that he writes for the common man, but refuses to listen to Charlie when he tries to tell his story. He also ignores the pleas of enlisted men at the USO who just want to have a good time before shipping off to war. This arrogance and ignorance ultimately result in Fink living in a sort of purgatory.

It’s unclear whether Odets and Faulkner ever met each other despite an overlap in their studio system careers. But one thing is for sure. Their stories of struggle and success, compromised values, and the nature of art versus commerce within the Hollywood machine continue to make for great drama.