Did AVENGERS Tease Captain America's Death with a Shot of Nebula? - Nerdist

Did AVENGERS Tease Captain America’s Death with a Shot of Nebula?

The first trailer for Avengers: Endgame set a somber mood for the movie, but beyond the importance of Scott Lang’s escape from the Quantum Realm, it doesn’t give much away in terms of plot. That sadness felt by the survivors of Thanos’s snap even extended to Nebula. The hardened warrior is first seen looking forlorn on the Guardians ship before we see her tenderly touch what appears to be a suit of some kind. At first (and second and third) glance it appears to be something left behind by her sister, Gamora, and this is a quiet moment of mourning. But the more we look at it the less we’re sure it’s not a moment of future mourning for someone else: Captain America.

Look closely at the image of Nebula’s gentle, out-of-character caress at the 1:26 mark of the trailer. It appears that suit isn’t empty and that she is touching someone’s shoulder. In the top right, the clean-shaven face of a white male who is wearing a strap over his shoulder is barely visible. Nebula might be bidding a fond, final farewell to another hero who is going off to face Thanos and make the ultimate sacrifice.

That looks more like a chair found on the Guardians ship the Benatar than it does the cushioned seats of a Quinjet (seen here from the set of Infinity War), which indicates they are in space. 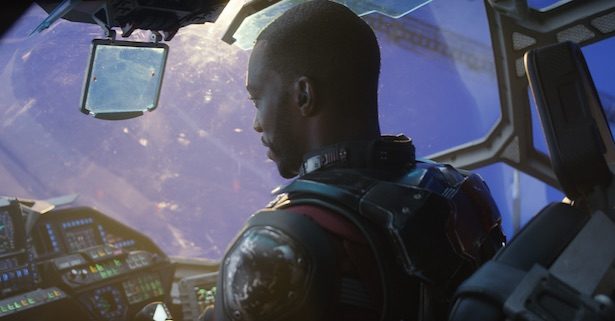 There are plenty of reasons the remaining survivors could end up together flying through the cosmos, but there aren’t as many plausible scenarios for why Nebula would be so gentle with anyone, let alone someone who is basically a stranger. What, or rather who, could make her so emotional? And why doesn’t Steve respond? Why does he continue to stare ahead completely focused even as she shows him such kindness? Is it because he’s going off to stand up to Thanos alone and they both know he’s not coming back? 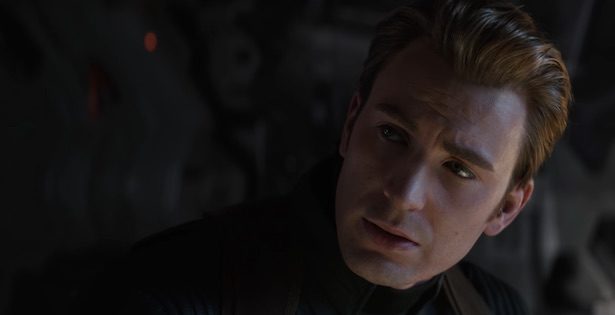 Why else would Nebula ever be so emotionally invested unless it involved her father? And since we’ve never been optimistic Steve Rogers would survive the film (even before Chris Evans bid a tearful farewell to the franchise already), this would be a perfect, incredible way to recreate oner of his character’s most famous moment from the comics. In Infinity Gauntlet #4, Thanos is laying waste to all the heroes who oppose him, killing everyone who fights him. Finally Captain America stands before him even though he knows the likely outcome. He then delivers an amazing line: “As long as one man stands against you, Thanos, you’ll never be able to claim victory.” 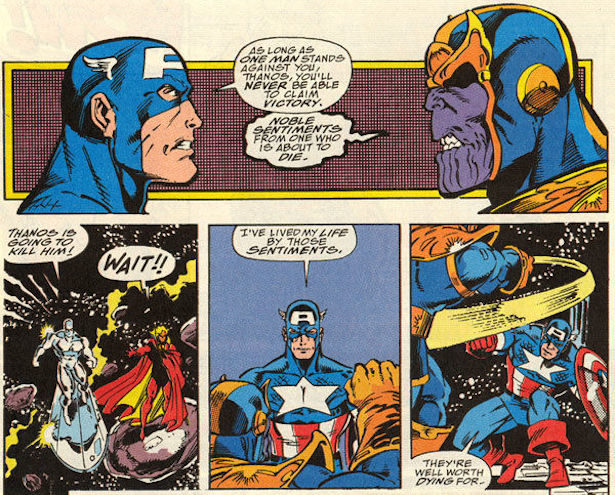 The moment is powerful, memorable; and completely captures everything we love about Captain America. Then Thanos kills him.If the MCU is going to bid adieu to Steve Rogers, there would be no greater way than to let him deliver this line as he bravely stands up to Thanos (who was already stunned when Steve did it inÂ Infinity War) while trying to buy time for the rest of the team. The key to winning might require a brief distraction, which is almost how Thanos lost in that moment in the comics , but it’s a brief distraction that will cost the ultimate price. Only this time Captain America’s sacrifice would mean so much more.A moment like that would be enough to make even Nebula emotional.