ATTACK OF THE MURDER HORNETS Director on Reality Becoming Sci-Fi

Asian giant hornets, or Vespa mandarinia, arrived in the US for the first time on record in December 2019, scaring the crap out of Americans. Since then, there’s been a fevered effort to eradicate the species of giant, flying bug—commonly known as the “murder hornet”—from its foothold, Washington state. Those involved in the quest to destroy the hornets’ nests are noble. However the jumbo wasp still, in all likelihood, remains a serious stateside obstacle.

In his new documentary, Attack of the Murder Hornets, director Michael Paul Stephenson (Best Worst Movie, Girlfriend’s Day) offers an inside look at how private citizens and officials from the Washington State Department of Agriculture (WSDA) have been fending off the invasive species. Nerdist spoke with Stephenson, who described the story as one where reality slips into science fiction, an insect invasion from another country ends up feeling like one from another planet. 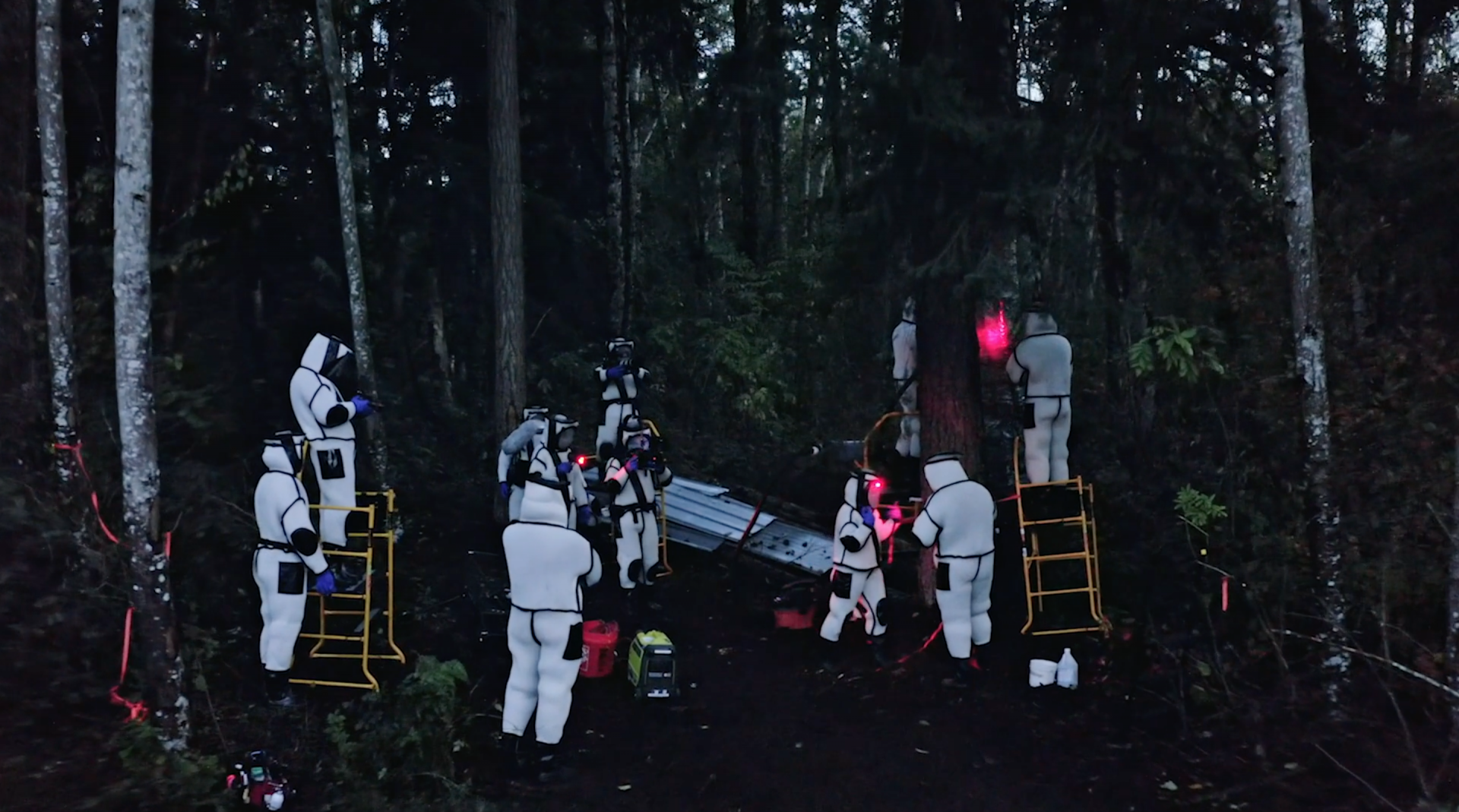 Nerdist: How did you pick the project? What excited you about murder hornets?

Michael Paul Stephenson: There was a New York Times article, the second of May, I believe, and I, like everybody else, was going nowhere. We were all on lockdown and I was having a pretty down morning, actually, and read the article and it was just like, “oh my gosh, murder hornets now.” I was drawn into that piece through the characters [the article’s author] talked about. Like Ted McFall, and this mystery behind why his bees were decapitated.

In terms of how the murder hornets arrived here in the US, do you have an explanation you think makes the most sense?

Obviously nobody knows, right? It’s because of humans, in some way, shape or form. And in telling this story you hear theories that are pretty based and logical, and then you hear stuff that’s far-fetched and conspiratorial and down the rabbit hole. I personally feel that [a narrative involving global trade] makes the most sense. That there was a stowaway.

Did the series Stranger Things inspire you at all? Because I noticed there was maybe some musical inspiration.

It’s funny you say that. I love science fiction, I love horror, I love genre movies. My kids—I have three daughters—they love Stranger Things. And they didn’t know anything about this project, really, other than I was making a movie about a murder hornet. They watched it for the first time and afterwards they said, “Dad we thought you were making a boring science movie, [but] this is like a weird Stranger Things.” And so it was kind of like, “Oh, that’s interesting.” But my kids picked up on it. 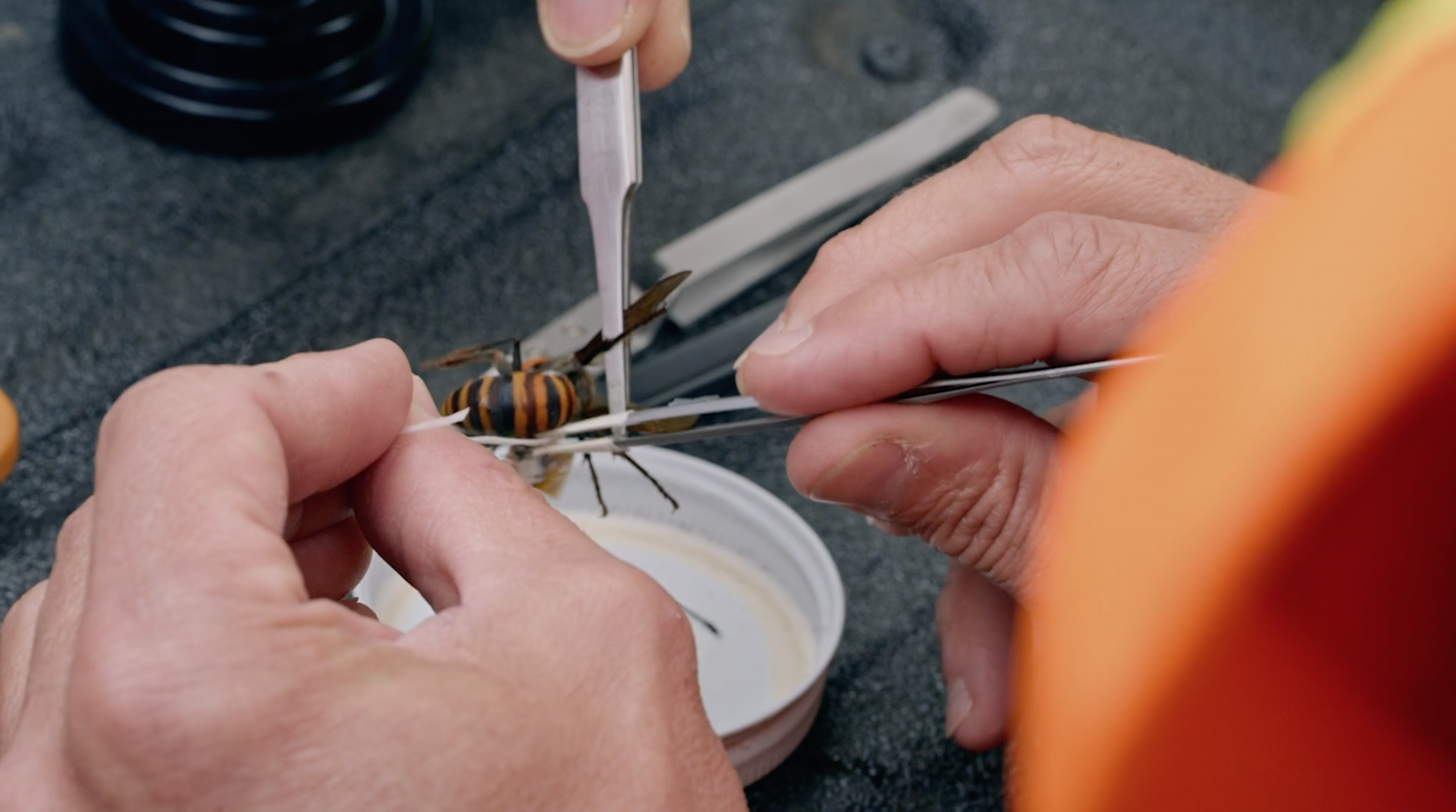 According to WSDA official Chris Looney, the US spent a half-million dollars on this particular endeavor to eradicate the murder hornets. Can you discuss that?

It’s a lot of public money going to an issue that is pretty important. I see the issue, and not having any science background at all, my head goes to “These guys need support.” And it’s an important issue that can have impacts we don’t really understand yet. And I look at [the people in the documentary] as thankless heroes.

I would say the scene that stuck out for me most was the glueing of the tracker onto the hornet. Can you discuss that?

I love that scene, because it feels like science in real time. Science is an iterative process, it’s a messy process, and these guys, despite their background in science, they don’t know anything about the Asian giant hornets, and here they are, expected to find one and trap one, and then track it back to its nest to hopefully find its colony. It was amazing to see them struggle, [because] if I were in their shoes, I would’ve quit.

Did you have a favorite “character”?

Where we stand now with the murder hornets, would you say we’re clear of danger or still in a lot of trouble?

What we learned this last year was, more than likely, there’s more than one nest, because some of the specimens that were found, they did some DNA studies on the specimens and were able to determine that hornets had come from far enough geographic locales. And it’s hard to know whether these nests have survived through winter. But for [murder hornets] to be truly eradicated, three years have to pass without seeing a single siting. So [hornet hunters] are still on the beginning of an uphill climb. 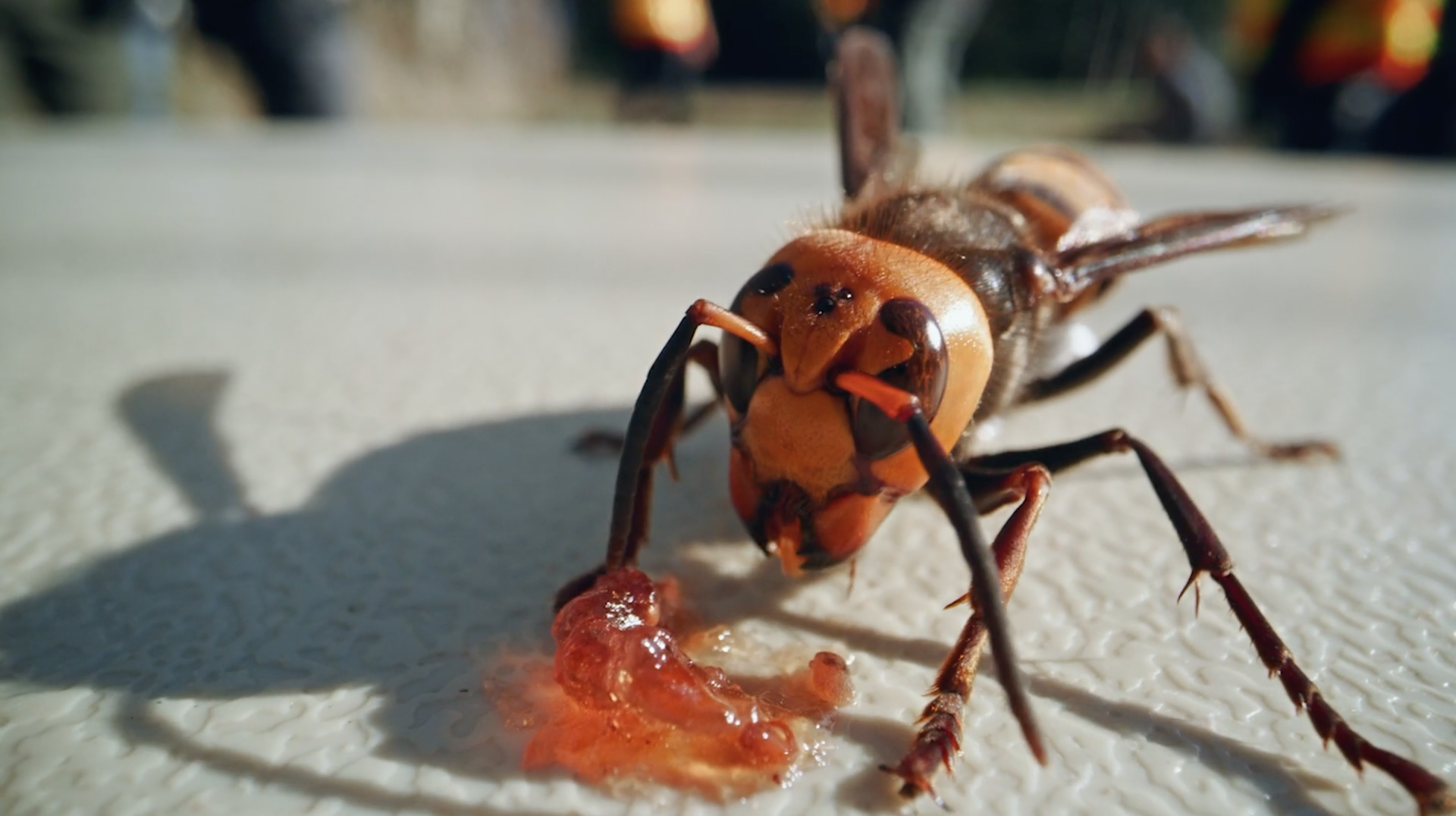 Those brave enough to spend a full eighty minutes with deadly, jumbo-sized wasps, and some truly idiosyncratic characters from the front lines, can check out Attack of the Murder Hornets on discovery+ beginning February 20.