When people think of hotels, they think of things like semi-comfortable beds, teeny-tiny shampoos, minibar snacks that cost roughly as much as an asteroid made of platinum, and of course, Pong, Missile Command, and Asteroids. Or at least people might think of those last few items later this decade, when a new hotel debuts in Phoenix, AZ based on Atari’s iconic, retro arcade games and consoles. 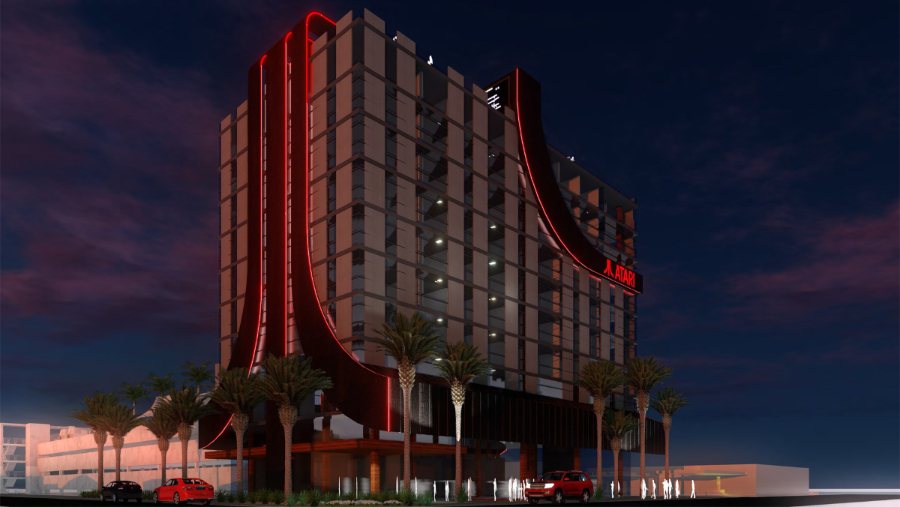 A digital mockup of what the Atari hotel in Phoenix, AZ may look like. Atari

Atari, best known as a pioneering arcade-game developer established in the 1970s, just announced plans for a new hotel designed with its IP in mind. The company says that it will provide “a unique lodging experience combining the iconic brand with a one-of-a-kind video game-themed destination.” Construction will begin in spring of this year, and once complete, will mark the first of a handful of planned locations in the U.S. including Las Vegas, Denver, Chicago, Austin, Seattle, San Francisco, and San Jose.

The storied gaming company will partner with multiple companies the endeavor, including Napoleon Smith III, an executive producer on the 2014 cinematic reboot of the Teenage Mutant Ninja Turtles. GSD Group, a brand strategy group associated with Steve Wozniak’s Woz Innovation Foundation will also be involved. It’s unclear if Wozniak’s relationship with Atari affected GSD Group’s decision to become involved in this project. (Recall that when Steve Jobs was employed at Atari, he enlisted Wozniak to design a chip that he couldn’t have on his own. Wozniak also helped design the Atari arcade game Break Out.)

Kids don’t know what Atari is. (Nor should they.)

Meanwhile, I’m 39 and STILL a bit too young for Atari (if Nintendo did hotels, on the other hand…).

So who’s this gonna appeal to? 50-somethings? Serious question. https://t.co/Dhh3AmzxJo

Unfortunately, details are scarce regarding what the hotel will actually do with Atari’s IP. In a press release for the hotel, the TMNT producer said that the design will have a “nostalgic and retro meets modern” look, and will, apparently in a very real sense, allow visitors to “stay inside an Atari.” The establishment also aims to “level up hotel entertainment” by offering virtual reality and augmented reality games, as well as “state-of-the-art venues and studios to accommodate e-sports events.”

Speaking of e-sports events, Atari and its partners are presumably building hotels in order to cater to the gaming-tournament industry, after it made more than $1.1 billion in 2019, and will likely only increase in value over the coming years. The planned locations of Atari’s hotels also overlap with several of the best cities for gamers—according to a list put out by WalletHub, Austin, San Francisco, and San Jose are all in the top ten, and Seattle is currently the Defender of the number one spot.

Talk about a throwback!

Those wanting to get in on the ground floor (first level?) of the Atari-themed hotel can sign up to become an early member, or follow the company’s currently desolate twitter account. There’s no word yet on how many duffel bags full of quarters guests will need to re-up their shower time.

What do you think about the idea of an Atari hotel? Is this place going to be a gamers’ paradise, or will tournament attendees prefer to stay in an Xbox? Invade the space below with your thoughts!