Remember the good old days of 80’s anime-inspired TV? We’re talking great shows like Thundercats and Voltron, which relied more on a unique animation style and storytelling over product placement. They’ve since become staples in geekdom–and may have also inspired the team at 17-Bit to put its own anime-flavored twist on Galak-Z: The Dimensional.

This top-down shooter, which makes its debut on PlayStation 4 next week (and the PS Vita later on), offers a conventional twist on the usual twin-stick proceedings–and not just in style. While the beautiful visuals will easily remind players of products like Macross and the earlier Gundam Wing cartoons (complete with explosions that pop to life with each enemy you destroy), there’s a lot more to this game than looks.

17-Bit Studios—who have been working on the game for quite some time now—have also employed an open-world exploration system, where each part of a level is connected as a whole. This enable players to not only track down objectives with ease, but also backtrack in case there are any enemies that need to be destroyed. The levels change dynamically with each play, so even when players think they’ve mastered a certain part, a new challenge awaits.

On top of that, various weapons are available over the course of the game, making it easy to eradicate foes. These include lock-on missiles and lasers, which can be improved through tech trees, helping improve your overall stability and strength. This is especially helpful with later challenges in the game that test your dual-stick shooting skills to the max. 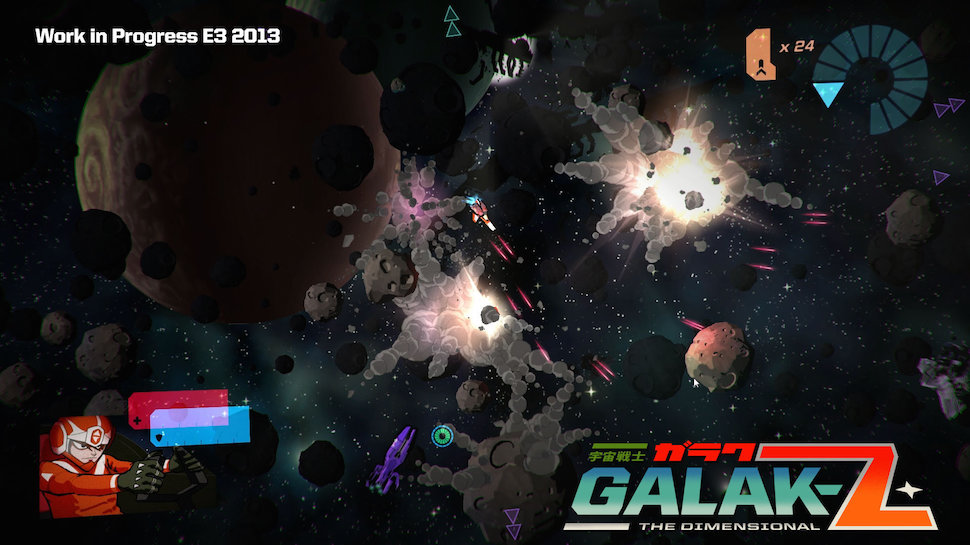 It’s not all about going on the offense, though. Your ship is outfitted with defensive maneuvers as well, including the ability to boost, thrust, and even side-boost for strafing capabilities, should you feel like avoiding incoming attacks while keeping an enemy locked on (using a beam you control with the other analog stick, in pure twin-stick shooter fashion). This should be a fitting change of pace from what players normally see in this sort of game, including Super Stardust Ultra and Geometry Wars 3: Dimensions Evolved.

Of course, being inspired by the likes of Starship Yamato (the developer even admitted so), there’s another key factor to consider–and it was actually just introduced last week before the game’s release. Throughout Galak-Z, you’ll be able to transform your ship into a mech warrior, utilizing a special blade and charging techniques to destroy enemies. This changes up the way you play the game, as you’ll learn all new defensive tactics (like dodging missiles and other attacks), while preparing rams, punches, and other moves to send these spacecraft to the intergalactic junkyard.

With a number of missions available, a variety of power-ups and areas to improve your ship, and plenty of kick-ass space action, Galak-Z: The Dimensional promises to be one of the most original entries in the twin-stick genre to date. Plus, those of you with some form of Transformer in your house (or, better yet, Voltron) will feel right at home with being able to control an enormous, weaponized mech.

The game can be pre-ordered on the PlayStation Network here.