Ever since The Mandalorian hit Disney+ last year, all people have wanted to know is when they can take home their very own Baby Yoda. Though, we’ve had some Baby Yoda merchandise come down the proverbial pipe since then, today at the New York Toy Fair Hasbro revealed a smorgasbord of sweet Baby Yoda belongings. The one that stood out was a super cute animatronic plush of the sweet alien babe, and the best news is it will only cost $60!

As the teaser for the toy showcases the little baby will look like its previously made plush versions but here Baby Yoda will giggle and gurgle whilst also doing some very cute little movements. According to the news from Toy Fair you can pat his head to incite his cutie movements including wiggling those big old ears. He will of course also try and force choke you cos that’s just how he rolls. If you get tired of playing around with Baby Yoda (what’s wrong with you??) you can always lay him down for a little Force nap. Basically he’s like the world’s cutest licensed Furby, though from what’s been released so far you don’t have to feed him any frogs legs to keep him energized.

In case you were living under a rock for the last six months Baby Yoda was introduced in Dinsey+ flagship show The Mandalorian which centered on the titular character having to protect the infant who he was originally supposed to kill in a Lone Wolf and Cub inspired scenario. The space Samurai western was hugely popular, largely due to the weekly scheduling that allowed fans to theorize on what was going to come next and of course on the very cute puppet at the center of it all. Baby Yoda was kept underwraps in the lead up to the series which is why much of the merchandise for the show and the character is only being released now. 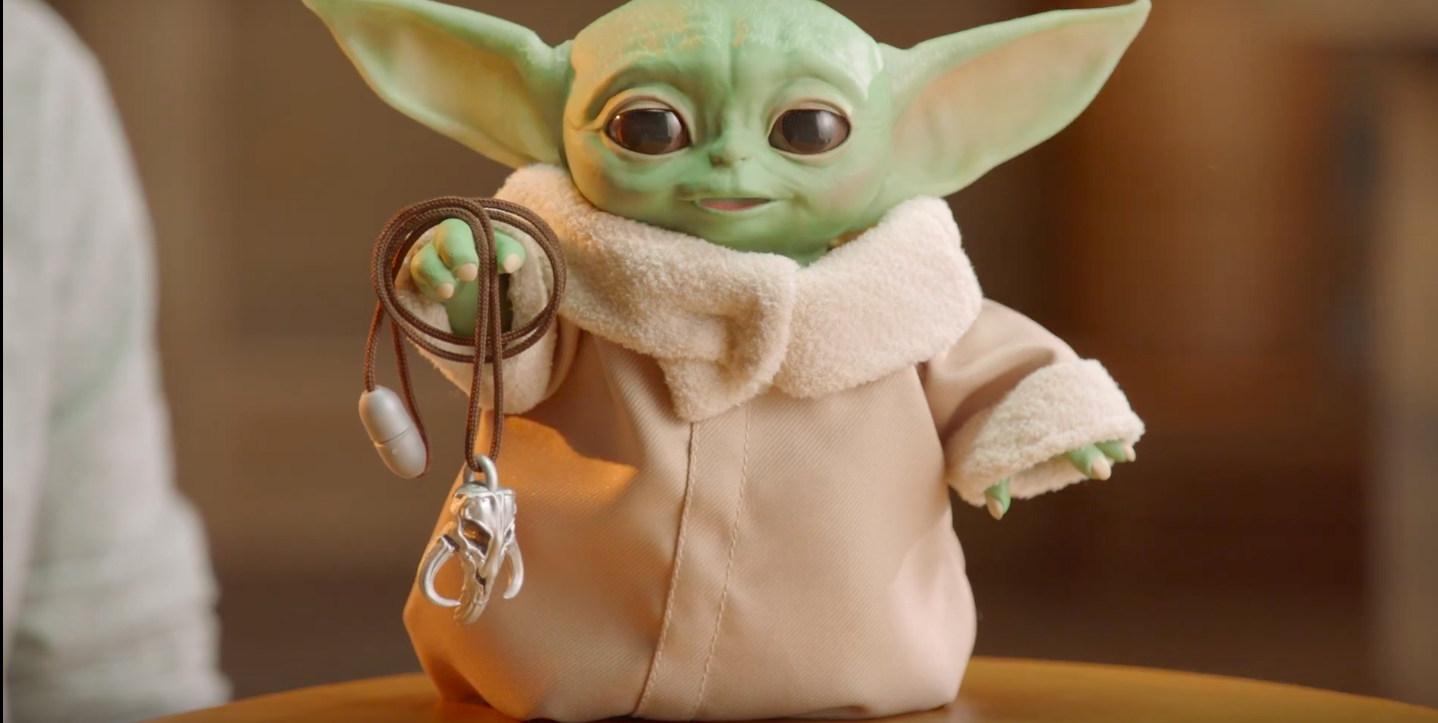 It’s pretty wild how far technology has come that we can all have our very own cute animatronic in our own home! What a blessing. Though Baby Yoda does come with a very cute Mandalorian pendant just like the one his daddy gives him in the popular show. It looks like he reacts it and interacts with the accessory, but sadly this Baby Yoda does not come with a floating bassinet! Who knows though, maybe that’ll be released as an add on later down the line, one thing that we do know for sure is that the Baby Yoda merchandise is only just beginning and there will definitely be plenty more coming our way in the next few months.