An Ant-Man Primer: The Men Behind the Insect - Nerdist 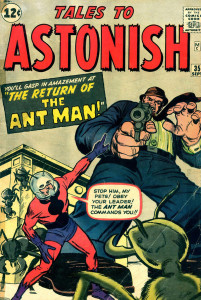 Ant-Man made a huge splash on the big screen this year, going rapidly from a “who’s that?” character to a household superhero, and in just a few days the Marvel Studios film comes home on Blu-ray (Dec. 8th). But while the insect-inspired hero is experiencing this newfound popularity, he’s been around for quite a while, appearing in the pages of Marvel Comics since 1962. He was even one of the founding members of the Avengers! Before you sit down to re-watch Ant-Man, let’s take a look back at the history of the hero and the different characters who have donned the mask and communicated with ants.

Tales to Astonish #27 in 1962 introduced the brilliant scientist Henry “Hank” Pym in a short story by Stan Lee, Larry Lieber, and Jack Kirby. In the 60s era of more scientific and “grounded” stories, Hank was working in his lab and discovered a previously unknown subatomic particle that he quickly and modestly named “Pym Particles.” These particles could be used to alter the size of an object, so naturally the scientist tested them on himself (because that never goes wrong). During the initial experiment Pym spent some time in an anthill and he was so impressed by what he saw there that he created a suit and helmet to communicate with the insects. Thus Ant-Man was born! 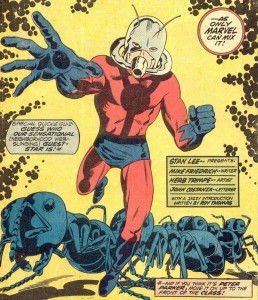 Hank Pym’s Ant-Man had plenty of adventures both big and small, and in 1963 gained a partner/love interest in his lab assistant Janet van Dyne. After the death of her father, she worked with Pym to create a superhero identity for herself and with grafted wings and her own shrinking ability, she became the Wasp. That same year, Ant-Man and Wasp banded together with Iron Man, Thor, and the Hulk to defend the Earth as the superhero mega-team the Avengers. Working with such powerful allies drove Pym to work on the growth aspect of his particles and develop larger heroic identities like Giant-Man and Goliath. Ant-Man couldn’t just be shelved, though, and so other heroes stepped up to take on the tiny mantle. 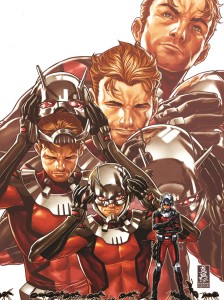 In 1979’s the Avengers #181 Scott Lang came on the scene. An electrical engineer turned burglar, a reformed Lang got a job with Stark International and met the Avengers when he was contracted to install a security system in their mansion. Shortly thereafter, Scott was at the end of his rope with his daughter in dire straits and the only doctor able to save her imprisoned by the wicked Darren Cross. The ex-con could only think of one solution and broke into Pym’s house to steal the Ant-Man gear and go after Cross. He was successful, and when he tried to return the suit to Hank, the original Ant-Man let him keep it with his blessings. This story was adapted into the Ant-Man film, mostly intact. In the comics, Scott would continue to do good deeds as Ant-Man on his own and as part of teams like the Avengers, Defenders, and Future Foundation. He has died and returned to life for the cause, and his daughter Cassie became a superhero as well under the name Stature, with the power to change size. Lang currently stars in The Astonishing Ant-Man.

While those are the two most famous Ant-Men, there have been even more. In 2006 Robert Kirkman (yes, The Walking Dead’s Robert Kirkman!) and Phil Hester launched Irredeemable Ant-Man. At the outset, it featured two low-level S.H.I.E.L.D. agents, Chris McCarthy and Eric O’Grady. The two accidentally ended up in one of Hank Pym’s labs, and accidentally knocked out the scientist. McCarthy donned an experimental Ant-Man suit and was just getting the hang of it when a subsequent supervillain attack took place. O’Grady selfishly pushed McCarthy aside to escape, resulting in McCarthy getting shot to death; O’Grady then removed the suit and used it to get away. Despite that incredibly inauspicious beginning, this irredeemable Ant-Man became a hero and tried to do good to balance out his frequent bad behavior (he’s infamous for watching then-Ms. Marvel shower and traveling in Black Widow’s cleavage). His heroism was noted by Iron Man himself, and O’Grady was part of the Initiative and served on such superhero teams as the Thunderbolts and Secret Avengers until his demise in the line of duty. 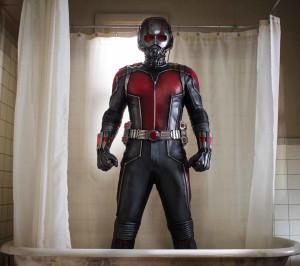 Ant-Man stories run the gamut from serious and thrilling adventures to more light-hearted and humorous tales… as you might imagine concern a guy who talks to ants. And while Marvel famously had concerns about Ant-Man as a popular and lasting character early on, he has certainly withstood the test of time and is now more popular than ever. You can catch Paul Rudd, Michael Douglas, Evangeline Lilly, and the rest of the cast on Blu-ray and DVD on December 8th. Scott Lang will also return to the big screen in next year’s Captain America: Civil War and the Ant-Man sequel Ant-Man and the Wasp in 2018!


Have a favorite Ant-Man or Ant-Man story line?  Let us know in the comments section below.  I’m partial to Hank, though in my book, his best appearance was in Marvel Zombies.  Who doesn’t love a brilliant, giant zombie scientist?!?