How ALPHAVILLE Gave Us BLADE RUNNER and THE MATRIX

When Blade Runner came out in 1982, it sat at the center of a new genre: “Future Noir.” Ridley Scott established a world so similar and yet so foreign to our own that it felt like both a throwback and a step forward. But Blade Runner was not the first film at once a science fiction movie and a noir movie. French New Wave legend Jean-Luc Godard had made a few neo noirs (movies using the storylines and themes of ’40s American crime movies, set in a contemporary time and place) in the early ’60s. It was his stock and trade. But in 1965, he turned out one set far in the future on a distant planet…but shot it in ’60s Paris and didn’t change anything. This brilliant oddity is Alphaville.

That’s where Godard comes in. In his endless journey to mess with cinema’s conventions and tropes, Godard took the well-known cinema hero and transposed him into a sci-fi setting. He even cast Eddie Constantine as Lemmy Caution again, making this a more or less official adventure. But Godard went out of his way to make Constantine ill at ease. He didn’t treat the actor as the star he’d become, and lit him to look even craggier than normal. Also absent were the quips and puckish charm of Caution; in Alphaville, befitting the somber tone of the narrative, Lemmy Caution is tough as nails, but out of his element. 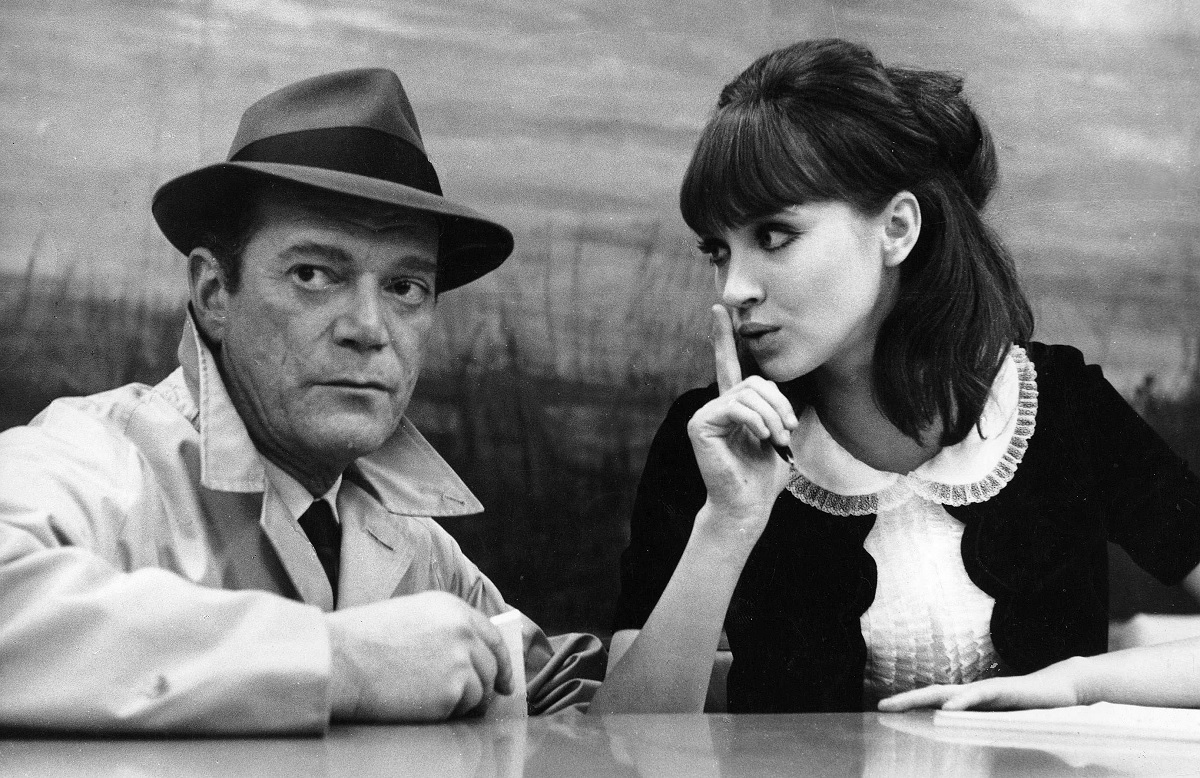 Lemmy Caution, a secret agent with the code 003, heads to Alphaville from “The Outlands” to find three missing colleagues. They are Dick Tracy, Flash Gordon, and Henri Dickson, all of whom had never returned. Alphaville itself is a brand new, state-of-the-art city of the future, run by a massive AI called Alpha 60. While Caution flies into town in his Ford Galaxie (really a Mustang), he pretends to be a photojournalist named Ivan Johnson, taking pictures of everything. 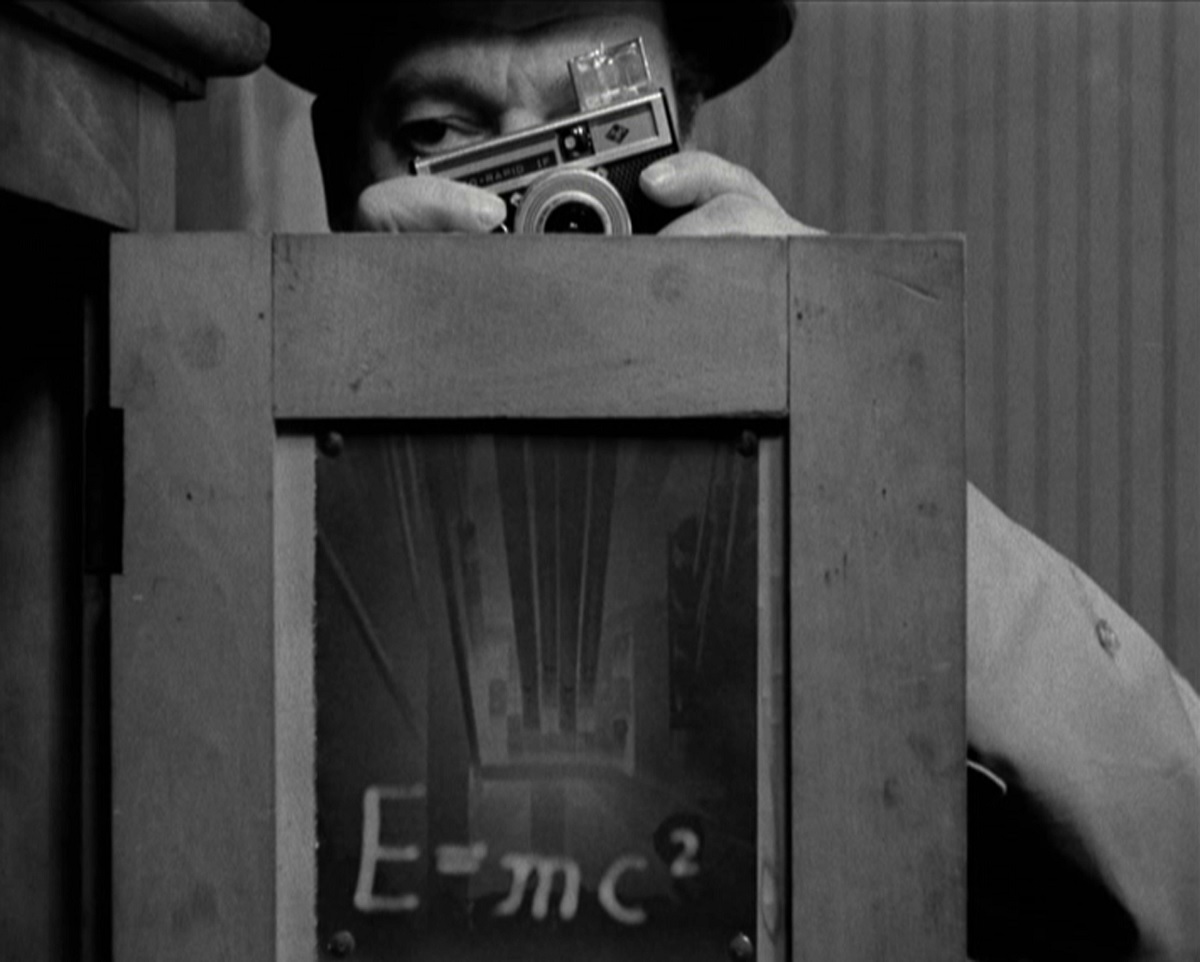 But, of course, Caution is on a mission: once he finds Dickson, he must kill or capture Alphaville’s creator, Professor von Braun (Howard Vernon) and destroy Alpha 60. While von Braun created the city and Alpha 60, the computer is actually in charge. It has outlawed free thought and individualist concepts like love, poetry, and emotion in the city. Naturally, this makes Alphaville a cold and desolate place, logical and without joy. Eventually, Caution meets von Braun’s daughter Natacha (Anna Karina), though she claims never to have met her father. Lemmy falls for her, and his love introduces uncertainty and chaos into the city. Together, Caution and Natacha must destroy Alpha 60 or escape to the Outlands. 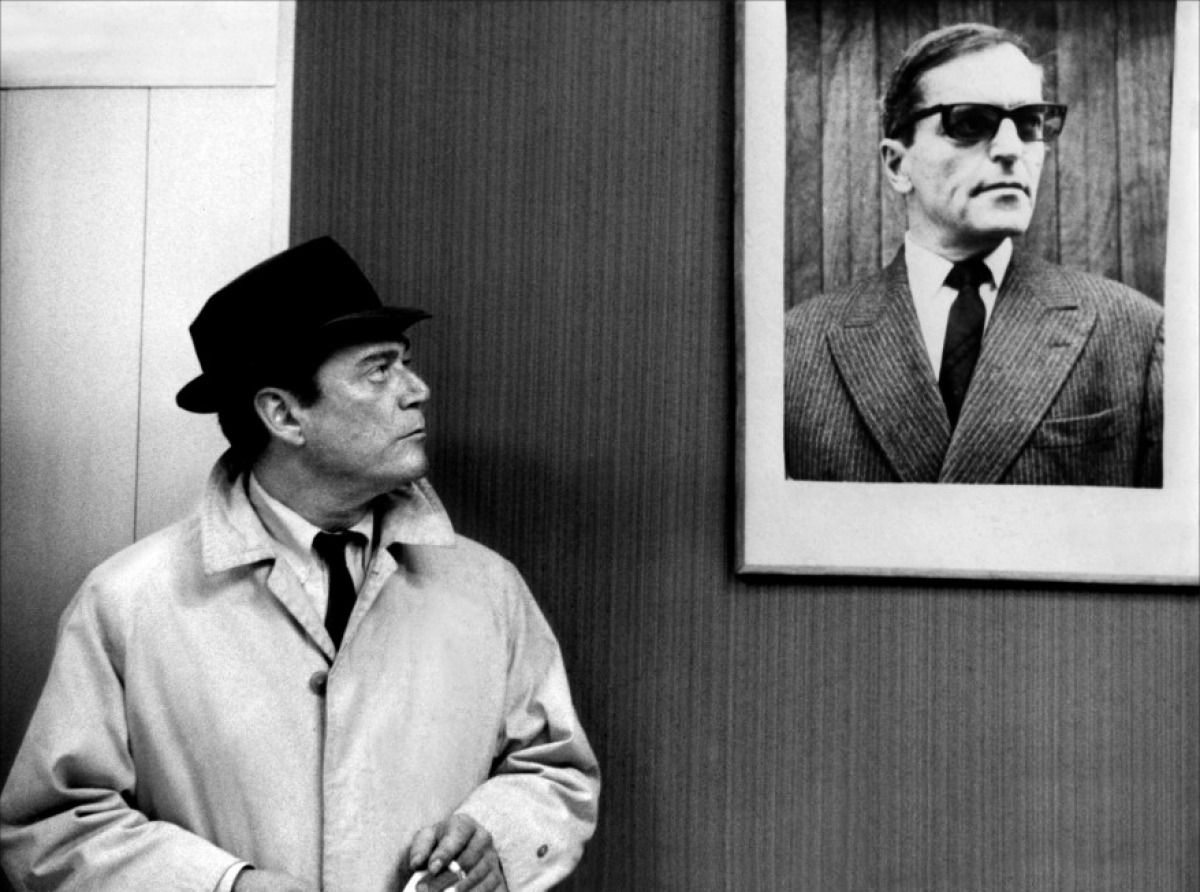 Godard’s premise has a beefy ur-American hero taking on an unfeeling machine; famously, the director wanted to name the film Tarzan versus IBM. The references to other pulp heroes like Flash Gordon and Dick Tracy help solidify the comic book aesthetic at work. But Godard also keeps the film as low-fi as possible. He gives Lemmy Caution brand new things–the Ford Mustang, a new-for-1965 flash camera–but keeps everything else very traditional. Constantine wears typical film noir fedora and trench coat, and he even carries a classic Colt. 45 pistol. 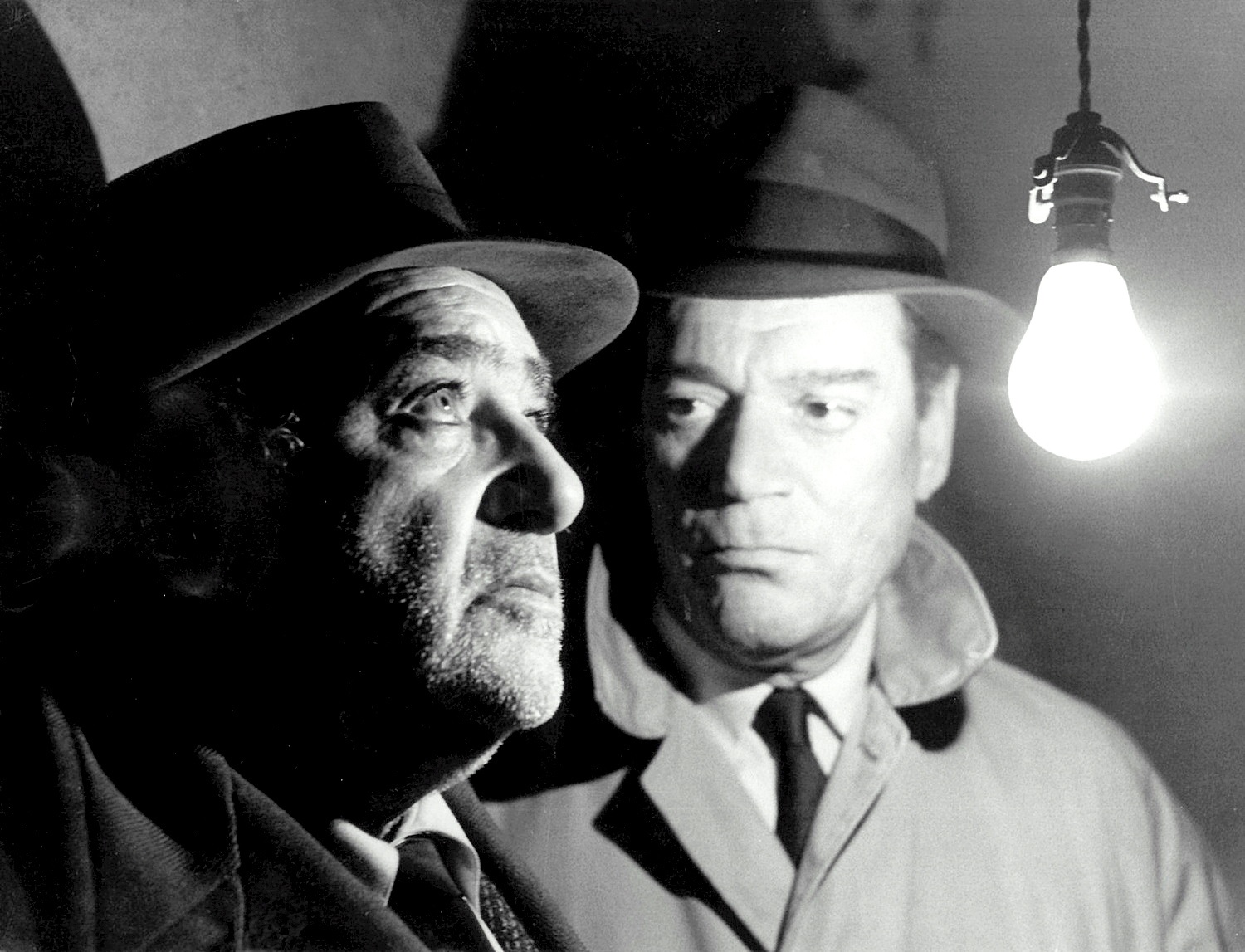 Simply through context and sounds, Godard is able to make contemporary Paris feel like the city of the future. The neon lights, the brutalist architecture, and nouveau riche decor would feel dated in any other movie, but in Alphaville they feel futuristic. Blade Runner and The Matrix would later use all of this to create their own hellish, crowded future scapes. 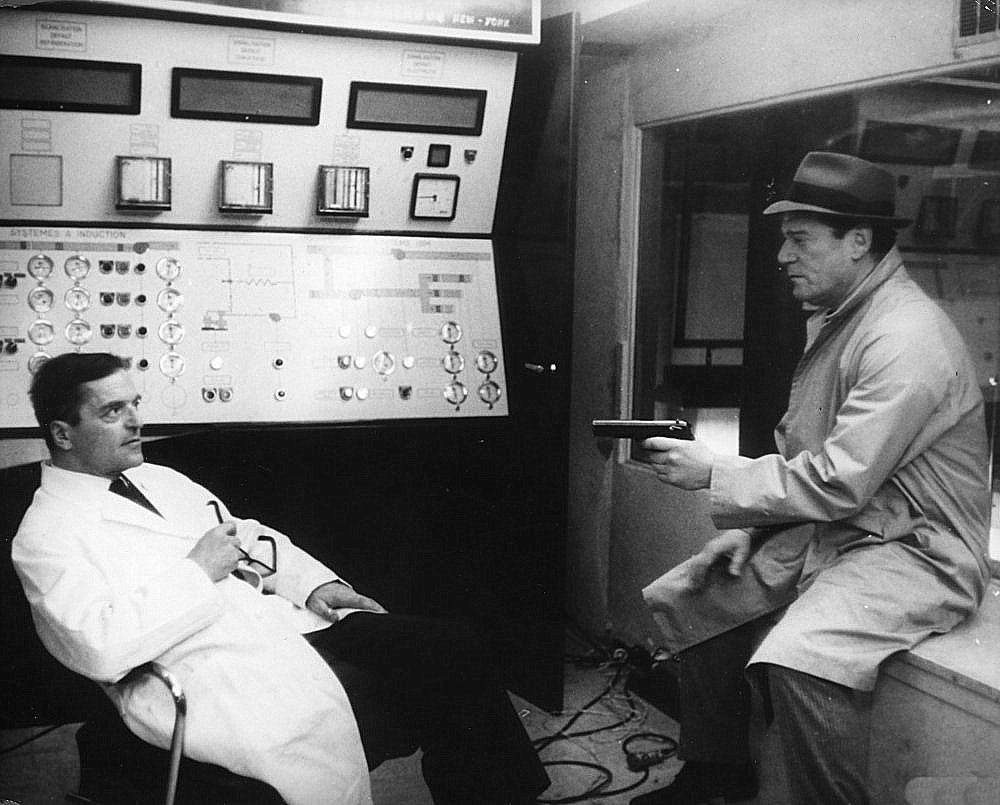 Alpha 60 takes on the same unseen, unfeeling dictator archetype as George Orwell’s Big Brother in 1984 and several evil computers throughout science fiction. The Matrix, Skynet from The Terminator series, and even every other baddie from Doctor Who fit that mold later on. Caution and Alpha 60 have several conversations during the movie–where the agent sits in a room while the belching voice of the computer asks questions. Interestingly, Godard gives Alpha 60 several direct quotes from the Argentinian poet and philosopher Jorge Luis Borges, one of the most humanist and imaginative writers of the 20th century. 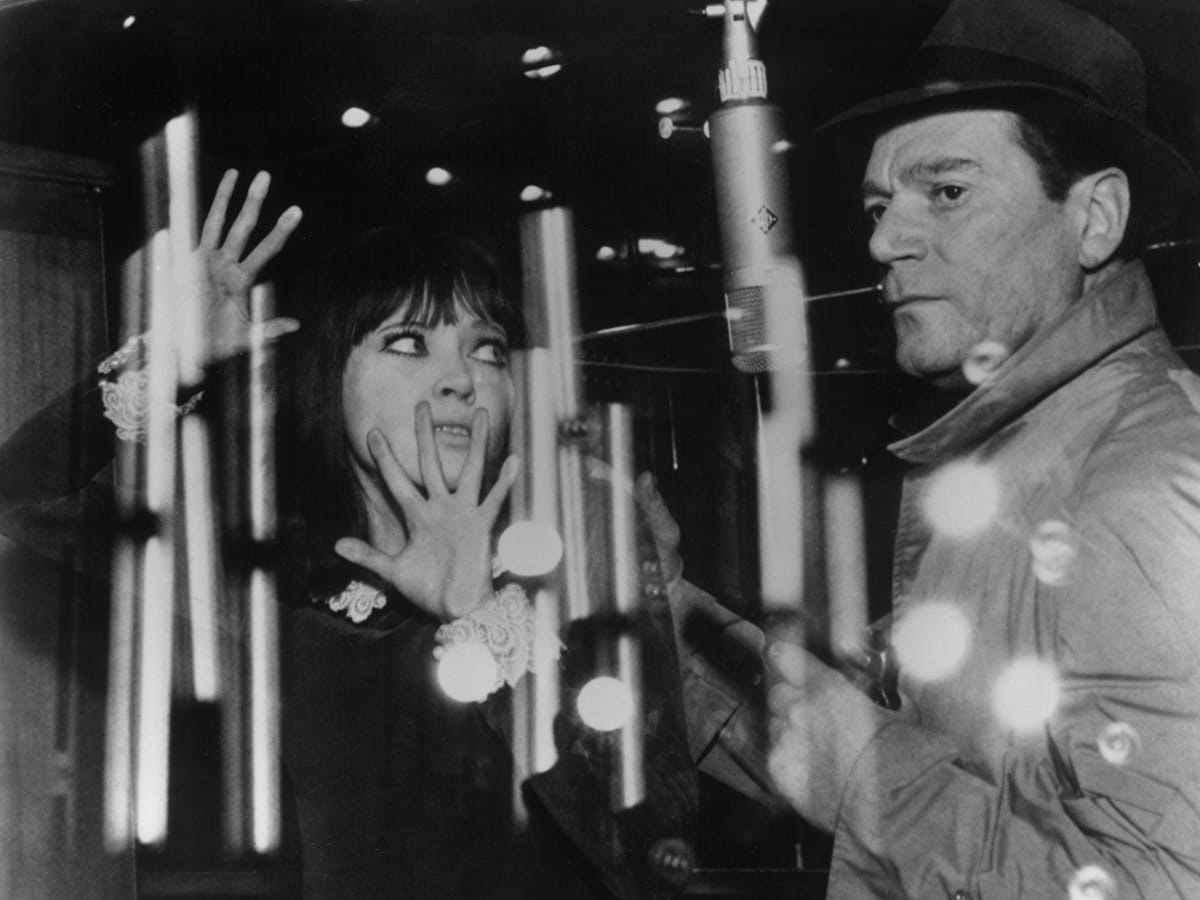 So it might seem like Godard, like a lot of his work, created a tongue-in-cheek satire of American pop culture with Alphaville. Certain he did that a lot. But if you just watch the movie as presented, the tone is deathly serious, the cinematography from the great Raoul Coutard is moody and bleak, and the story of love conquering in a world of oppressive logic feels completely genuine. Godard did make a work of dystopian science fiction, he just did it in a way that evoked film noir. 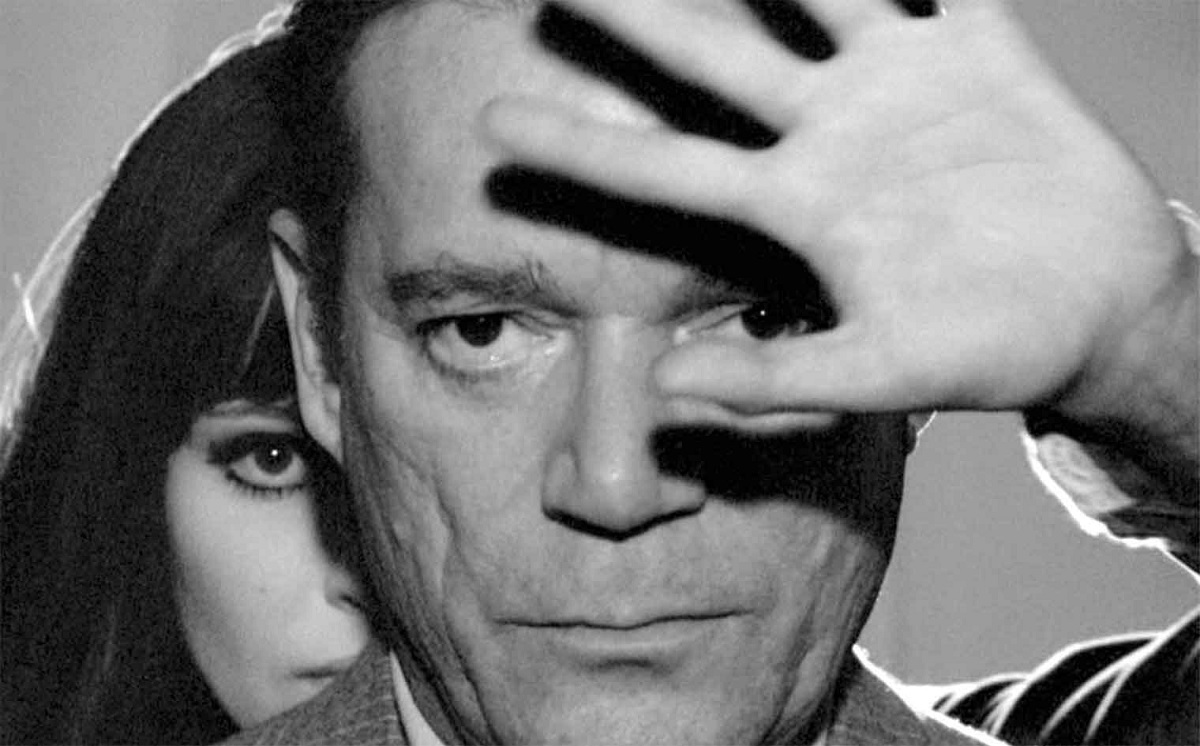 And in that way, Alphaville remains a benchmark for the genre. The mixture of noir with futurism is now ubiquitous, whether in anime like Akira and Cowboy Bebop or live-action films like Blade Runner and The Matrix. Lemmy Caution is a sci-fi hero for the ages; a stoic, hard-bitten fighter for love and creativity. It might have gotten there on its own, but Cyberpunk as a genre might not exist without Alphaville. 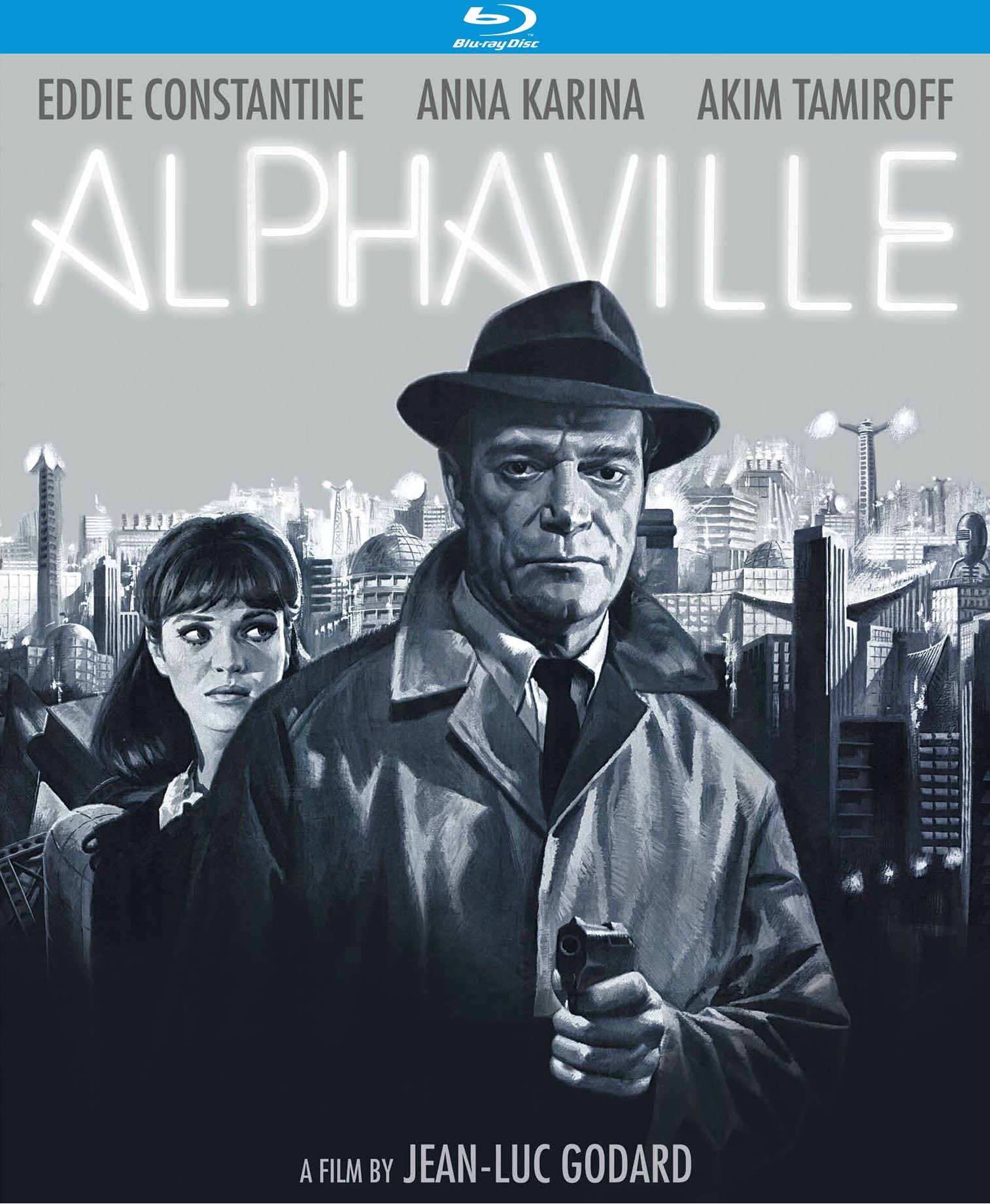 Alphaville has a brand new 4K restoration from Kino Lorber, available now on Blu-ray. It’s an essential piece of the sci-fi puzzle and a standout work of French New Wave cinema. Definitely check it out if you haven’t.