It might not seem like it a lot of the time these days, but the world can become a better, more inclusive place. Martin Luther King Jr. said, “Let us realize the arc of the moral universe is long, but it bends toward justice”. It’s a little bit easier to realize that possibility today. One of the greatest scientists of the 20th century, Alan Turing, will be the new face of the UK’s 50-pound note. This comes 67 years after his government chemically castrated him for being gay.

The Bank of England has announced (in news we first heard at the BBC) Turing has been chosen as the newest historical figure to appear on a British note, having been selected to represent the scientific community after 227,299 nominations put up 989 eligible candidates. Governor of the Bank of England, Mark Carney, picked Turing from a final list of 12 luminaries, including Stephen Hawking. Needless to say, Turing is overly qualified for such an honor. His code breaking machines were invaluable in defeating Germany in WWII, he played a major role in developing early computers, “provided the theoretical underpinnings for the modern computer,” and “he set the foundations for work on artificial intelligence by considering the question of whether machines could think.”

A photo of Turing taken in 1951 will grace the new £50 polymer note. The background will feature examples of his work, machine, signature, and a quote (“This is only a foretaste of what is to come, and only the shadow of what is going to be.”). The Turing note will enter circulation by the end of 2021. 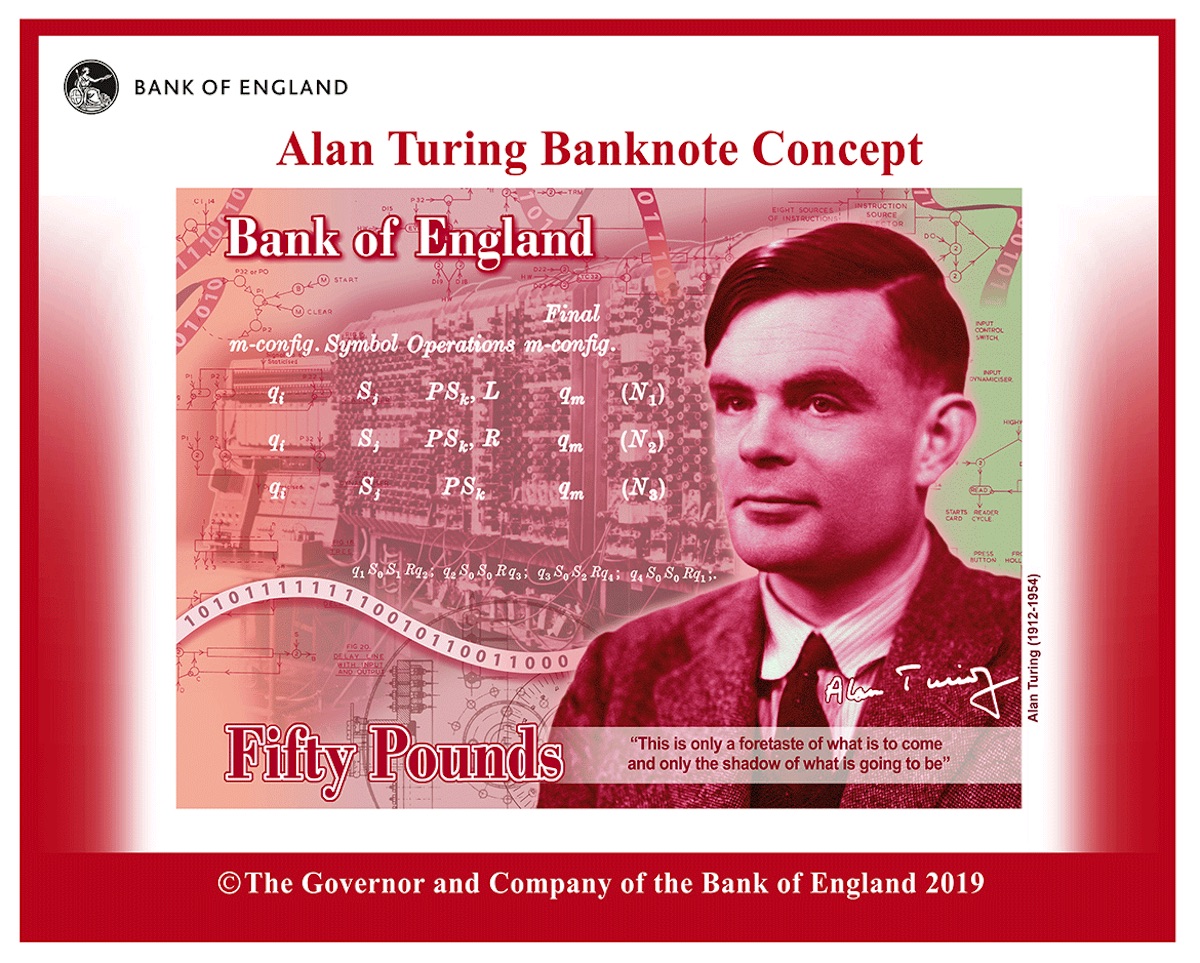 “Alan Turing was an outstanding mathematician whose work has had an enormous impact on how we live today,” said Carney in a statement. “As the father of computer science and artificial intelligence, as well as war hero, Alan Turing’s contributions were far ranging and path breaking. Turing is a giant on whose shoulders so many now stand.”

Sadly that wasn’t always the attitude of the British government towards one of its greatest minds. In 1952, the authorities found him with a 19-year-old man and convicted Turing of the “crime” of gross indecency. Homosexuality in any form was a crime in Britain until 1967. As part of his sentence, the courts mandated Turing should be chemically castrated. Two years later, at only age 41, Turing killed himself.

Turning receiveed a formal royal pardon in 2013. Still, there’s no way to ever atone for his abhorrent treatment and the discrimination he faced. It took a long time, but the arc of the moral universe bent towards justice for Alan Turing.