With the release of “Gone With a Trace,” the fifth episode of Star Wars: The Clones Wars’ final season, we have finally moved away from Rex and the Bad Batch, and back to the familiar blue-and-white montrals and lekku of Ahsoka Tano. For fans of Anakin Skywalker’s former Padawan, it’s a welcome return for a favorite character. And yet, due to the nature of this as a revival season for the series, it’s helped make Ahsoka’s arc in the Star Wars saga feel as nonlinear as the World Between Worlds.

The following contains minor spoilers for Clone Wars, Rebels, the Ahsoka novel, and The Rise of Skywalker

It’s tough to say “when last we left Ahsoka,” because that can mean so many things. For some, the last we saw of Ahsoka was the end of her previous Clone Wars arc, “Trial of a Jedi.” There, we saw her turn her back on the order that had turned theirs on her. For others, she may have just faced Darth Vader in the temple on Malachor, her fate uncertain. Or perhaps she’s heading out into the unknown with Sabine Wren looking for Ezra. Or, maybe, they last heard from her as a voice through the Force, calling out to Rey on Exegol.

But therein lies the fascinating thing about Ahsoka and specifically the place that these new episodes fall in her overall arc. These are technically part of the original plans for her from before The Clone Wars was canceled. They were written and storyboarded for use then, but never made it to air until now. As a result, Ahsoka has accidentally embodied the same non-linear serialized storytelling that George Lucas championed.

In the time since the show went off the air, however, we’ve gotten a lot more Ahsoka content. She showed up on Star Wars: Rebels running intelligence operations for the Rebel Alliance. We also got Ahsoka, the novella by E.K. Johnston that picks up one year after Revenge of the Sith and shows us how she initially got that gig, as well as her cool white lightsabers.

All of these have essentially been sequels to the original run of Ahsoka stories. Now, we’re getting episodes that were written first, but by virtue of their long-delayed production and release, feel like prequels to tales we already know. In essence, we’re getting the chronological opposite of the Original Trilogy for Ahsoka. While that trilogy got prequels and sequels, where Ahsoka is now could almost be referred to as “midquel.” A set of tales inserted in between where she came from and where she’s going. 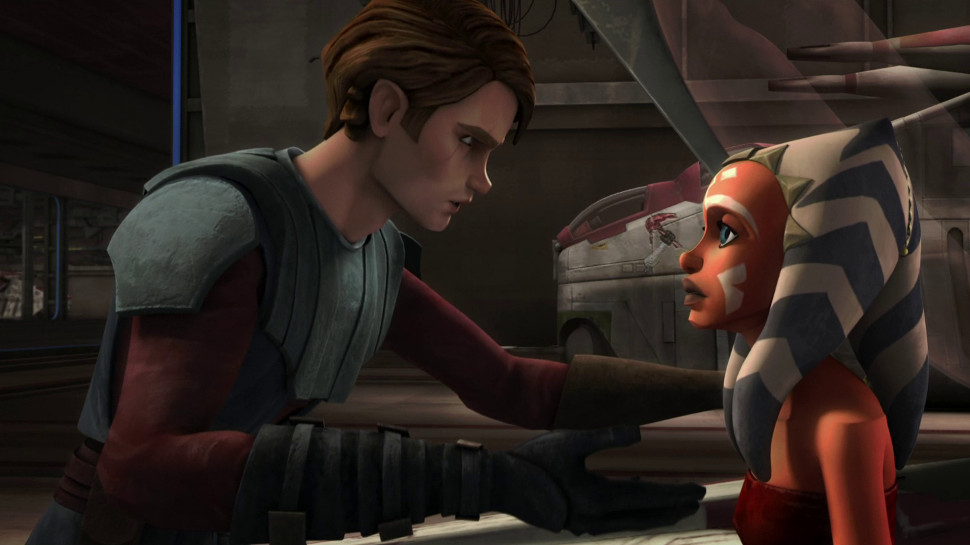 Knowing where her arc ends up might undercut the drama in her current circumstances for some. But it’s actually an opportunity for a more character-based understanding of her. As we watch Ahsoka now, we can focus less on the “what happens” and more on the way those things impact her. These are the moments that will lead her to find her own path. She is no Jedi, yet we know she grows into someone who never truly rejects the ideals of what the Jedi should have been. These are the stories where she’ll begin to understand that for herself.

It’s also a rare situation where getting a backstory on a character feels like it won’t be rife with forced or retcon attempts to tie the future story to the past. In this case, those future details were written based on the beats that were already laid out for her. The things that Ahsoka does in the novel or in Rebels happen because of what happens in the remainder of this season. Which means, hopefully, there’s not going to be any “Oh hey, wouldn’t it be great if she built L3-37?” type moments. Only the things that were always planned for her in the grand scheme.

It likely won’t be the last time we get Ahsoka stories in this somewhat disjointed nature. Rumors have spilled about a potential appearance of her in season two of The Mandalorian. The finale of Rebels also hinted at possible future stories of Ahsoka and Sabine Wren. And of course, the ominous inclusion of her voice calling out from the Force in The Rise of Skywalker’s climactic moment. For those still eager for stories about what happens next, there’s still plenty of room for Ahsoka on the horizon.