African Trapdoor Spiders Are the Masters of Spooky Surprises - Nerdist

African Trapdoor Spiders Are the Masters of Spooky Surprises

Because it’s 2020—and murder hornets and raging wildfires are very real things—you may feel like hiding away. Perhaps even hiding away in a dark hole, despite the fact that’s probably not a great idea. That idea is great for the African Trapdoor spider, however, as its hole is what allows it to survive. The jumbo arachnid even fashions itself a little door with a hinge for it’s hole—which, admittedly, does sound like an appealing way to keep endless bad news out.

Tekweni Media, a company devoted to traveling and celebrating the wildlife in South Africa, recently posted the above video of the African Trapdoor spider to its YouTube channel. The video features Graham Adams, who works at the Nambiti Game Reserve in South Africa, showcasing the Trapdoor in situ. And while Adams notes the spiders are relatively harmless to people, that still doesn’t make the idea of one of them leaping out of a hole any less unnerving.

As Adams shows, the African Trapdoor, like other members of the Ctenizidae family of spiders, construct burrows with a cork-like lid; one consisting of soil, vegetation and silk. The holes the spiders create, as well as the doors themselves, are most often seemingly perfect cylinders. And not only that, but the doors even remain stuck to the ground with a hinge made of silk.

Although Tekweni’s video doesn’t show the Trapdoors in action, the two Twitter videos above and below do. And, confirming what we all knew to already be true: It is indeed creepy to watch these spider pop out of nowhere and bring prey back to their lair. 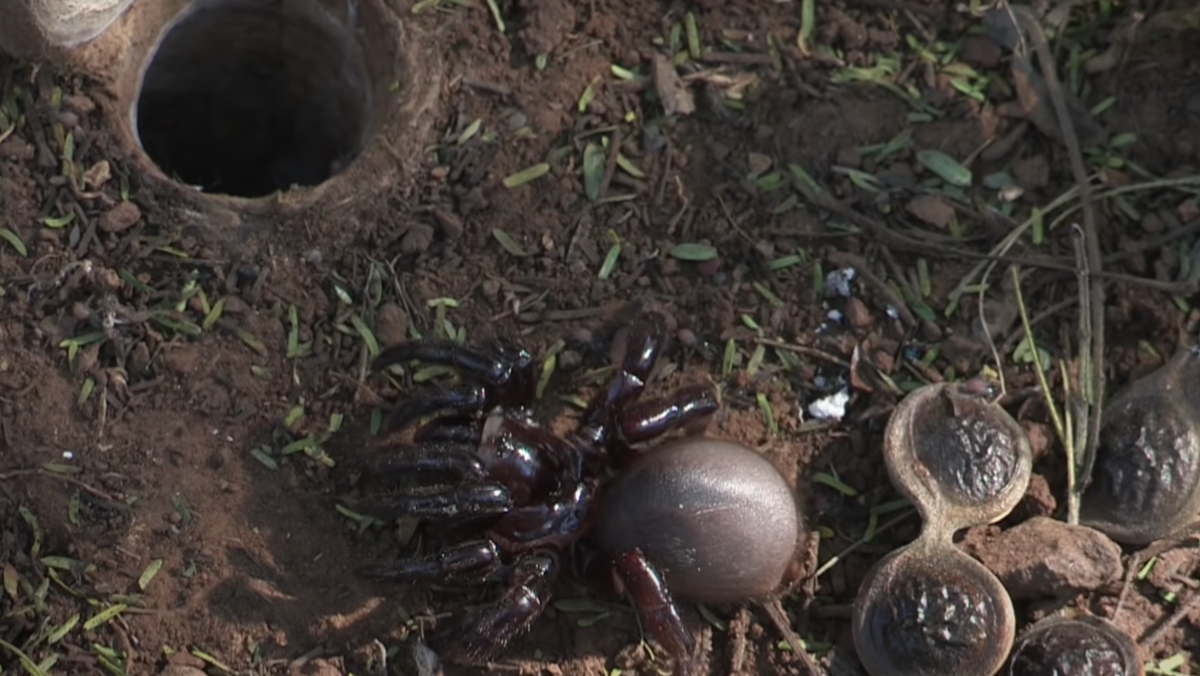 Luckily, if you were to ever stumble across a Trapdoor, and it does actually bite you, you don’t have much to worry about. “[The Trapdoor’s] bite to us would basically be like a bit of a bee sting,” Adams says in Tekweni’s video. “[It’d] burn for a little bit, but really nothing severe; you don’t have to seek any medical attention.

Awesome footage of a trapdoor spider in action.
Reminds me of those creepy hand banks, where a hand pops out suddenly to grab the coin. pic.twitter.com/ooyR8O1nEr

Again, though, we would imagine an unexpected encounter with an African Trapdoor would at least call for a few hits off an inhaler.