A View of the Australia Wildfires from Space - Nerdist

A View of the Australia Wildfires from Space

The wildfires currently raging in Australia have burned more than 14.6 million acres of land, killed 18 people, and destroyed at least 1,200 homes. Indices that track air quality show that it’s been “hazardous,” “unhealthy,” or “very unhealthy,” for much of southeastern Australia, and even New Zealand is receiving smoke from the fires. And now, to go along with the statistics and warnings regarding just how bad these fires have become, we have visual confirmation from images taken from space.

NASA recently posted the pictures above and below, which come via Earther, to its Twitter account. The space agency noted that these “Catastrophic fires are ravaging large swaths of Australia,” and said in a post that “the outlook for the bushfire situation in Australia continues to be grim.” NASA’s Earth Observatory outlet has also said that there have been forced evacuations, and even scenes of “residents, tourists, and firefighters huddled on beaches and the wharf as wind-driven fires advanced.”

In the above GIF, we see before-and-after images of the smoke that’s currently blanketing a gargantuan swath of Australia’s southeast coast; the before image was taken on July 24, 2019, the after, January 2, 2020. (For reference, the town of Orbost is roughly 92 miles from Mallacoota.) The images were taken by the Operational Land Imager on the NASA- and USGS-operated Landsat 8.

The image below was taken on January 1, 2020 by the Moderate Resolution Imaging Spectroradiometer (or MODIS) on NASA’s Aqua satellite. Note that the smoke has a dark, tan shade to it, while clouds are white. 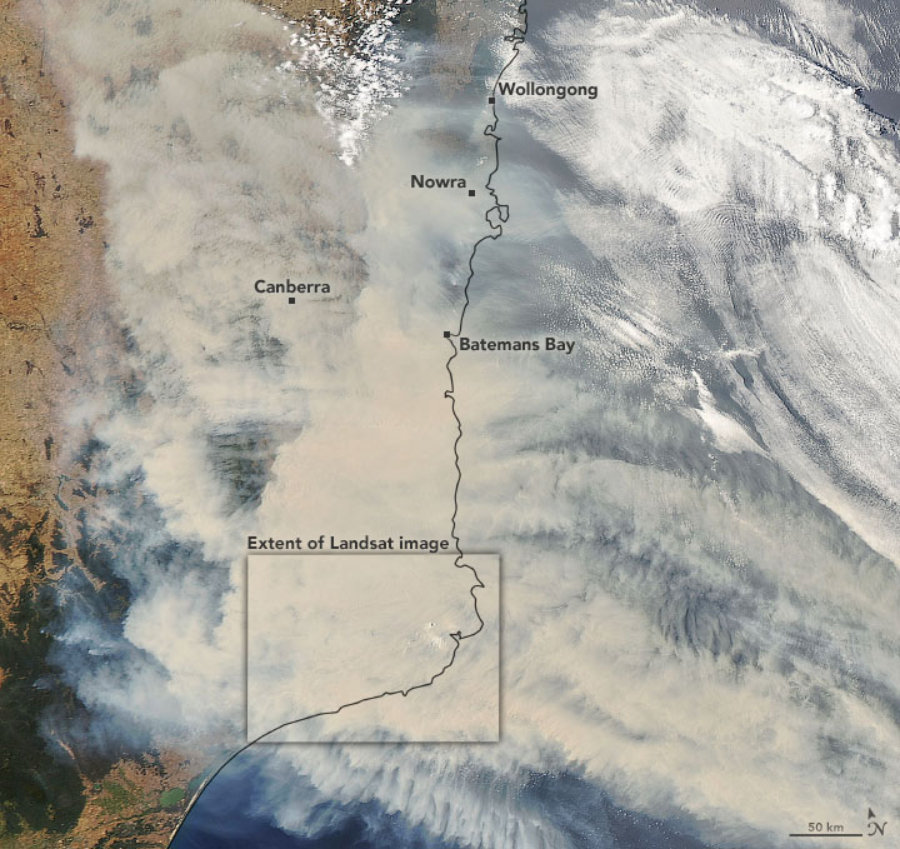 NASA’s satellite instruments aren’t only being used to passively record images demonstrating the horrific intensity of the wildfires though. They’re also being used to help detect wildfires that have broken out in remote regions, which, in turn, helps to inform land managers around the world of potential issues in a matter of hours. NASA says that its instruments “detect actively burning fires, track the transport of smoke from fires, provide information for fire management, and map the extent of changes to ecosystems, based on the extent and severity of burn scars.”

Following the news of Australia bushfires and keeping those affected in our thoughts. Pictured are Queensland mainland and Fraser Island. Stay safe. pic.twitter.com/f1xmtywFW5

For those who want to take a closer look at the smoke from the fires, adjust the dates on which images are being displayed, or view another portion of the planet, NASA’s  Earth Observing System Data and Information System (EOSDIS), is an excellent resource. Note that you will need to use the “Add Layers” button in order to have the map illustrate the current fires.

What do you think about these images of the wildfires currently ravaging Australia? Do you think there are any other actions NASA can take to help support the fight or is the space agency already doing everything it can? Let us know your thoughts in the comments.