‘AeroSlider’ Is a Cool Fantasy Version of the Hyperloop - Nerdist

‘AeroSlider’ Is a Cool Fantasy Version of the Hyperloop

Back in August of 2013, Tesla and SpaceX CEO Elon Musk, along with engineering teams from those two companies, announced their concept for a new mode of transportation dubbed the “Hyperloop.” Since then, numerous engineers, designers, and even fledgling companies (sometimes with big-dollar backers) have offered up their take on the unconventional concept, with a few of them even developing prototypes. Now, there’s another company that’s thrown its design in the metaphorical ring (loop?), and while it’s somewhat fantastical, it does offer a glimpse of what the future of the ‘loop could like—at least to some extent.

The new take on the Hyperloop (which comes via Futurism), has been dubbed AeroSlider, and is a conceptualization by Mayone, a design consultancy that provides guidance for companies in fields such as finance, urban mobility, and telecommunications. And even though the page describing the AeroSlider is relatively sparse and unconcerned with the nitty-gritty of how to implement this type of transportation, there are some aesthetic cues and novel features that could be incorporated into future designs by various companies executing on a real-life version of the advanced, ultra-speedy people-mover. 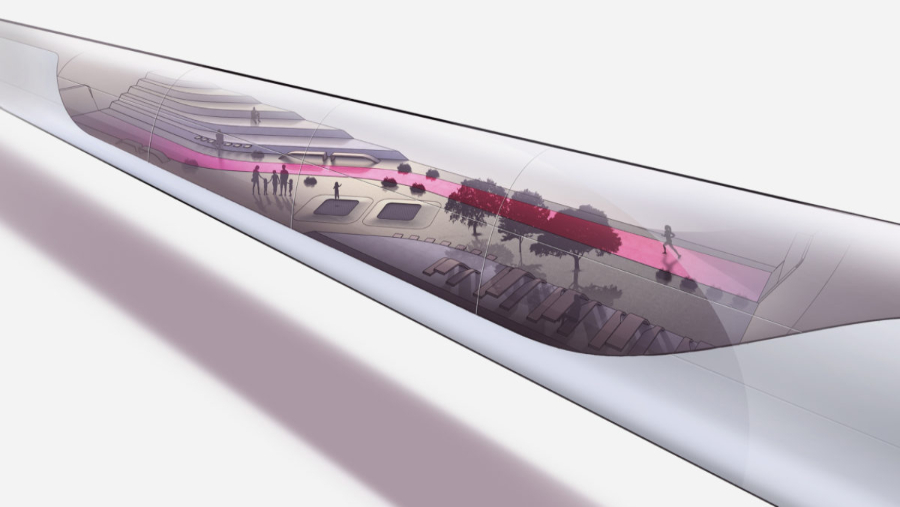 For example, the AeroSlider passenger car is simply massive, with a length of 250 meters, or about 820 feet—this is small relative to the average freight train in the U.S., which is about 6,600 feet long, although it’s gargantuan compared to the tiny pods that have been entered into the annual SpaceX competition that pits different innovators and universities against each other to see who can deliver the fastest one. On top of its extensive amount of space, the AeroSlider also offers up “a running track, open plaza area, restaurant, bars, gyms and multi-purpose rooms which can accommodate meetings and work when commuting.” Which kind of begs the question: Why bother getting off when your stop’s arrived if everything you could ever need is in the AeroSlider?

In terms of specs and functional components, the AeroSlider appears to closely mimic, more or less, those of the Hyperloop. The system uses magnets to propel the passenger cars down tubes, which are, presumably, airless. As the cars continue down the tubes, picking up speed with each electromagnetic kick from the sequential magnets, they could reach 500 mph—again though, this is just a design for a concept, so that top speed should be taken with a massive grain of salt. The tube for the cars would also be located above ground, and be supported by pillars that could be positioned at various heights in the ground, allowing for more flexibility than regular train tracks.

Unfortunately, some of the design elements, while super cool, seem like they would never be implemented in real life. For example, the AeroSlider features windows, which wouldn’t be that much fun to look out of considering passengers would be speeding by surrounding terrain at about 65% the speed of sound. (For reference, check out this video of the Shanghai Maglev moving along at 268 MPH.) There have been proposals for zoetrope windows, however, which could potentially create an optical illusion that would make the walls of Hyperloop or AeroSlider pod “melt away altogether.”

Regardless of the feasibility of the AeroSlider, it’s still great to see designers from around the world offering up their takes on the concept. Getting people excited for what the future could look like is always a good thing, and the fact that the AeroSlider, or any one of the other Hyperloop variants, would be far more environmentally friendly than current forms of air travel is a solid step—or rocketed push—in the right direction for transportation technologies.

What do you think of the AeroSlider? Do you foresee a mode of transportation like this coming to fruition, or would it just be too hard to make this type of design a reality? Let us hear your totally tubular thoughts in the comments!