A MOBA, But For Your Table Top - Nerdist

A MOBA, But For Your Table Top

If you are into playing multiplayer online battle arena games (a.k.a. MOBAs) such as League of Legends, Heroes of the Storm, or DotA 2, you should seriously check out Krosmaster Arena. Like these other games, Krosmaster is jam packed with unique characters to choose from, but on the flip side, you build and play as the entire team.

With everything from powerful warriors to elemental mages, sly thieves to deadeye archers, summoners who call upon whimsical creatures like Tofus and Gobballs to arcane automatons and undead pirates, the list goes on for almost one hundred and fifty characters and growing.

The base game comes with two different arenas to play in; one on each side of a board. Each arena has a different terrain arraignment, but you can choose to set up however you like before playing the game. You’ll also receive eight characters for you and your friends to choose from, allowing for a nice range or team compositions.

The object of the game is fairly simply; you are trying to be the last team with Gallons of Glory, also called GG tokens–which quickly became Good Game tokens among my online gamer friends and I. Each player begins the game with six GG tokens and as the game progresses tokens can be lost and gained. The most common way a player will gain GG tokens is when they eliminate an opposing character. The victorious player takes GG tokens from the other player equal to that character’s level. 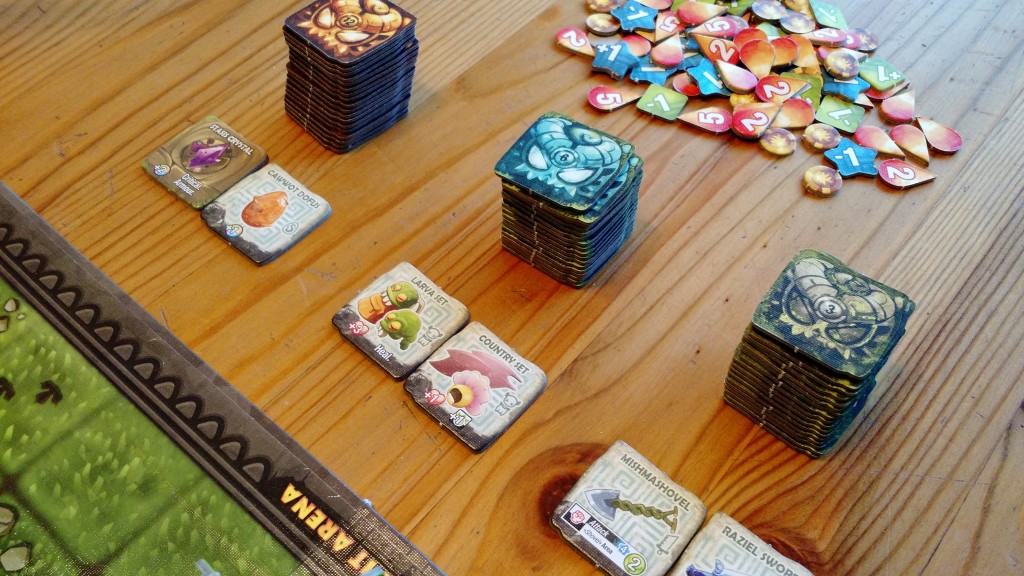 Each character has a few basic stats; Health points (which are pretty self explanatory), Movement points which indicate how many spaces they can move each turn, Initiative which indicate their place in the turn order, and Action points. Each character has between two and four actions depending on their level, each of which costs Action points to perform. Actions can be anything from attacks to spells, heals or buffs, all of which should be strongly considered when building a team and spending Action points. 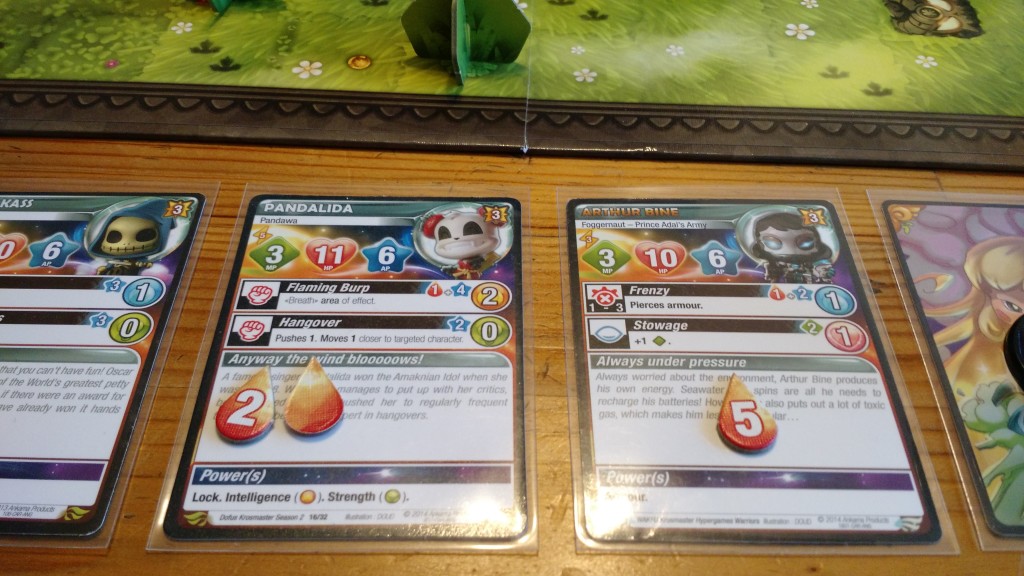 For additional depth, and much like MOBAs, characters can collect coins called Kama as they move around the arena. The Kamas can be used to purchase powerful weapons and buffs from special spaces in the arena called Demon cells. These items and buffs can be the edge you need to survive against an enemy’s attack, or the strength to destroy them. If you are feeling particularly greedy, you can spend a large sum of Kamas to actually steal a GG token from your opponent.

While the game does not revolve around the classic three lane combat or the base destruction objective format common to MOBAs; I found that building synergistic teams, calculating my movements, and timing my attacks along with the purchase of items and buffs is very reminiscent of the MOBA experience I love. With so many characters to collect and choose from, the experience is always expanding. And, with an actual online version of the game, you can take everything you have purchases physically and use it to play games against other people online. Give it a try, and tell us what your team comps end up being.