A Glimpse Into Clan Toreador's Beautiful Secrets in VAMPIRE: THE MASQUERADE - Nerdist

A Glimpse Into Clan Toreador’s Beautiful Secrets in VAMPIRE: THE MASQUERADE

Nelli G, played by Cynthia Marie, represents clan Toreador in L.A. By Night. and portrays the classic Toreador—a healthy dose of sass crossed with blood drinking realist. For many players, Clan Toreador is the gateway into Vampire: The Masquerade. A solid starting clan with a mix of traditional vampire powers — Anne Rice flavor — and billed as a premiere clan it’s easy to see why many gravitate to it. Every clan in VTM has a drawback — a flaw referred to in-game as a Bane — and the Toreador has the best Bane in the entire game, arguably it’s not even a negative—they need to surround themselves with beautiful things. What that beautiful thing is in the eye of the beholder, of course, so members of the clan each get distracted when out of their element. This means that this clan has been cursed to suffer immortality by surrounding themselves with things they find awesome.

Who wouldn’t want to be this?

With the best set of Disciplines in the game for gaining blood, the best Bane, and known as the socialites for the entire setting, Clan Toreador packs serious clout. With the rise of the Second Inquisition and political turmoil in the V5 setting, even the Toreador have their secrets and agenda. 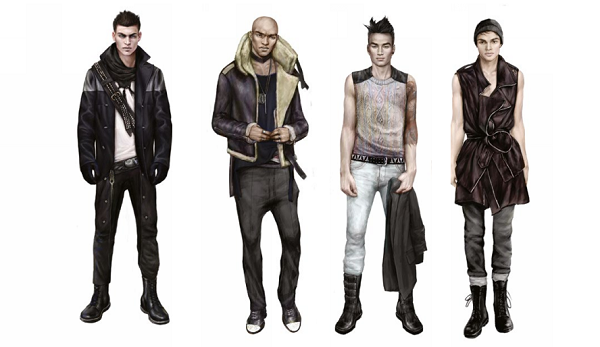 Clan Ventrue is often lauded with the creation of empires and there is truth to that when it comes to mortal society. For centuries, the Clan of Roses has been selective in those who received the gift of immortality, and in all cases, they strive to embrace pioneers from every kind of avant-garde. Within their ranks, you’ll find artists, musicians, socialites… but also power brokers, architects, engineers and more. Having a kaleidoscope of talent, each among them a master of their craft as a human, has strengthened the clan in undeath. This drive and selectiveness isn’t random, yet rather cultivated by the Clan’s founder Arikel. Famed for her work, legend says that she painted a mural of which the past, present, and future of Kindred society was depicted—and it wasn’t kind.

Gifted with the powers of Auspex, which allows for bits of prophecy at times, the Clan has worked to become the soul of Kindred Society. The Clan is always stepping in when needed to allow the immortals to survive. In V5, while it is easy to laugh at the clan for being fashionistas, the clan fashion is part of a global conspiracy to help vampire society survive in a world with the Second Inquisition. Each outfit or theme can depict membership, clan status, rank, and more without the use of cellphones. By keeping the tradition strictly oral, spread among private gatherings, and updating fashion every season—they ensure no hunters catch on. Lastly, as other vampires become reliant upon this means of survival, they give Clan Toreador even more clout and power. Do not be fooled into thinking the Clan is just artists and foppish musicians. They play spy games and they play them well.

Most players of RPGs quickly gravitate to each class or clans powersets. At first glance; Clan Toreador is rather mundane with the three basic disciplines of Auspex, Presence, and Celerity. Auspex for the gift of second sight, Presence to control emotions, and Celerity to move at supernatural speeds. With this basic set of powers, they lack the setting cool factor of Thin Blood Alchemists, or Clan Tremere’s mystical wizardry. Even in prior editions when Combination Disciplines were created, the ability to paint someone’s aura on a canvas wasn’t terribly exciting.

This is perhaps the Clans biggest branding problem to keep experienced players from playing them. In many LARPs around the country, there are no members of Clan Toreador, instead other clans infiltrate them and pretend to *be* Toreador. With no formal clan structure, and many players caring little for art, such a feat is easy to achieve.

Yet the Clan’s power is not within their power set, but in the strength of their true members. Fame and talent are powerful unspoken forces and not something often quantifiable. In the setting, thanks to centuries of admiration, fans, and favors from their fellow immortals a Toreador can often get many characters ejected from Kindred society entirely with a few words. All the combat power of a Brujah amounts to nothing when a Toreador decides to have society shun you—or make all your dreams come true.

The old Chicago By Night VTM supplement was a famous element of game lore. Within its pages, two ancient vampires warred over each other using a colorful cast of NPC’s as their pawns. Helena, founder of the Succubus Club, and a powerful Methuselah who was perhaps the lover of the Clan’s founder makes her return in V5. According to the Lore-Sheet, she has fallen to the Beckoning, which is the term used to say she’s traveled overseas to engage in Kindred warfare (most probably a future product release). Since she is an iconic legend in both the setting and in VTM Lore, it stands to reason that Helena might even be the cause OF the Beckoning.

Regardless, if you are lucky enough to play a member of Clan Toreador in V5, you can be a descendant of hers. Not only would this give you a tie-in to the upcoming new Chicago By Night book, it grants you the ability to increase your status in Vampire Society on the fly. At its highest rank, Helena’s descendants can toss an official Succubus Club party once again. Every vampire Embraced within the last 200 years has heard of the club, and once you open your own version—fame, resources, status and more all land at your feet for free. This proves once again that in Vampire, it’s not what you do that matters—it’s who you know.