5 SHAZAM! Villains We Want to See in the Sequel - Nerdist

5 SHAZAM! Villains We Want to See in the Sequel

Warning! Spoilers For Shazam! Throughout!

In Shazam!‘s post credits stinger, the evil little worm known as Mister Mind appeared. And in Shazam! comics, wherever Mister Mind is, his Monster Society of Evil is usually near, with plenty of villains in tow.

Over the decades, the Monster Society has included dozens and dozen of villains–even Hitler and Mussolini were members at one point! (they probably won’t go there in a movie.) A film would have to narrow things down a bit. But aside from Mister Mind and Sivana, who should make the cut? Here are our top picks for five members of the Shazam rogue’s gallery we think should join up for the sequel. And no, Superman ain’t one of ’em.

Fans like to think that Black Adam is Shazam’s “opposite number” villain, but he’s more like a corrupted version of Shazam than his polar opposite. In the comics, Shazam’s evil doppelganger was named Ibac. But his real name was even better: Stanley “Stinky” Printwhistle. He was a common thug granted powers by Satan, who offered him the chance to become a champion of evil, in exchange for his immortal soul.

Printwhistle gladly said yes, and whenever he spoke the magic word “IBAC”, he transformed from a skinny petty criminal into the musclebound villain. And just like Shazam, each of the letters in his name stand for something — I for Ivan the Terrible, C for Cesare Borgia, A for Attila the Hun, and C for Caligula. There is a less cheesy version in modern DC Comics, but we like the “Stinky” Printwhistle version better. 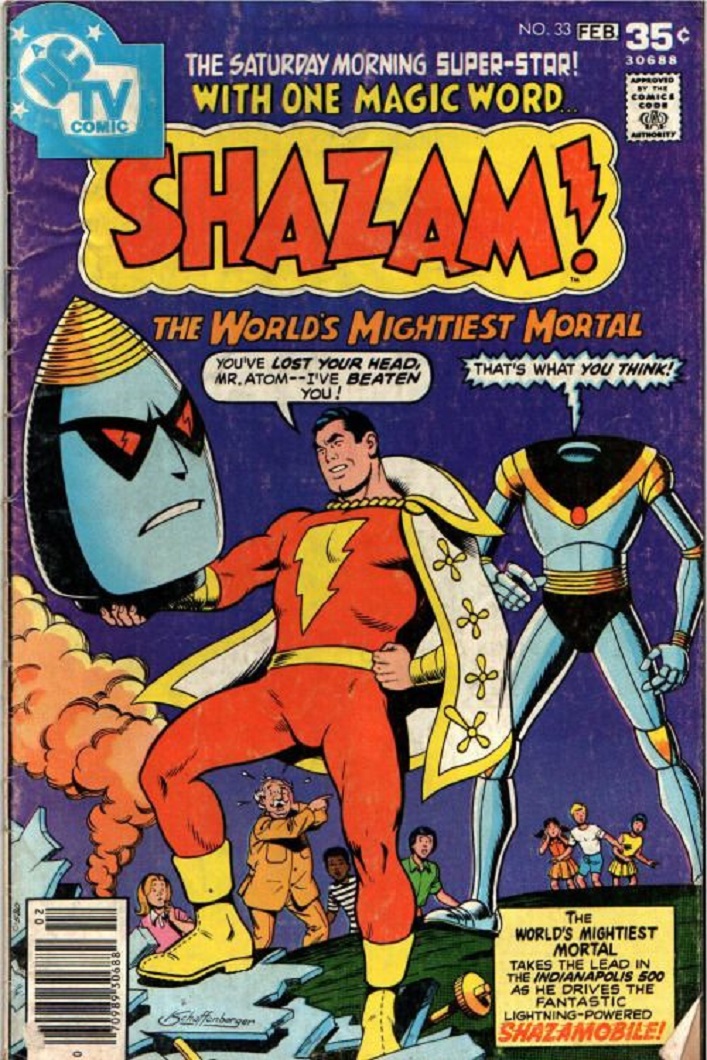 One of the goofiest looking of the original Shazam! villains, Mister Atom was your classic sci-fi bad guy from the Atomic Age. He was basically a robot created by a mad scientist who powered him with atomic energy. Mister Atom became sentient and killed his creator, then decided he needed to rule the world. You know, typical stuff. A more modern version of the character appeared in the ’90s in the Power of Shazam series, in which Mister Mind controlled him. We want him in the Shazam! sequel, but only if it’s the classic goofy looking version. 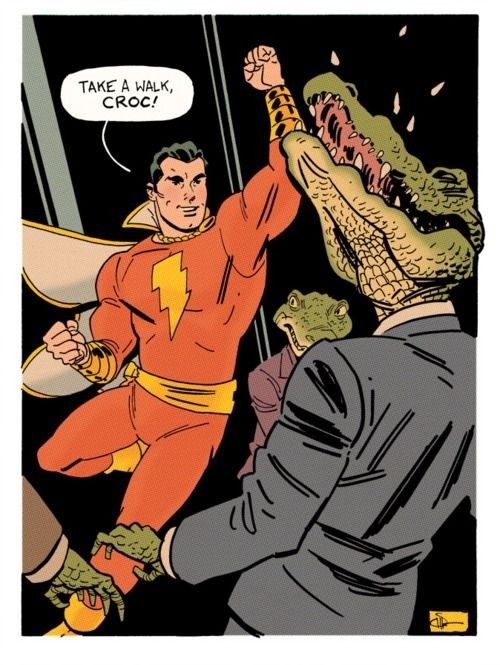 We actually catch a glimpse of the The Crocodile Men inside the Rock of Eternity in Shazam!, but that only left us wanting more. Herkimer, Jorrk, and Sylvester belong to a race of humanoid crocodiles from the planetoid Punkus, and they become Mister Mind’s enforcers of the Monster Society of Evil. 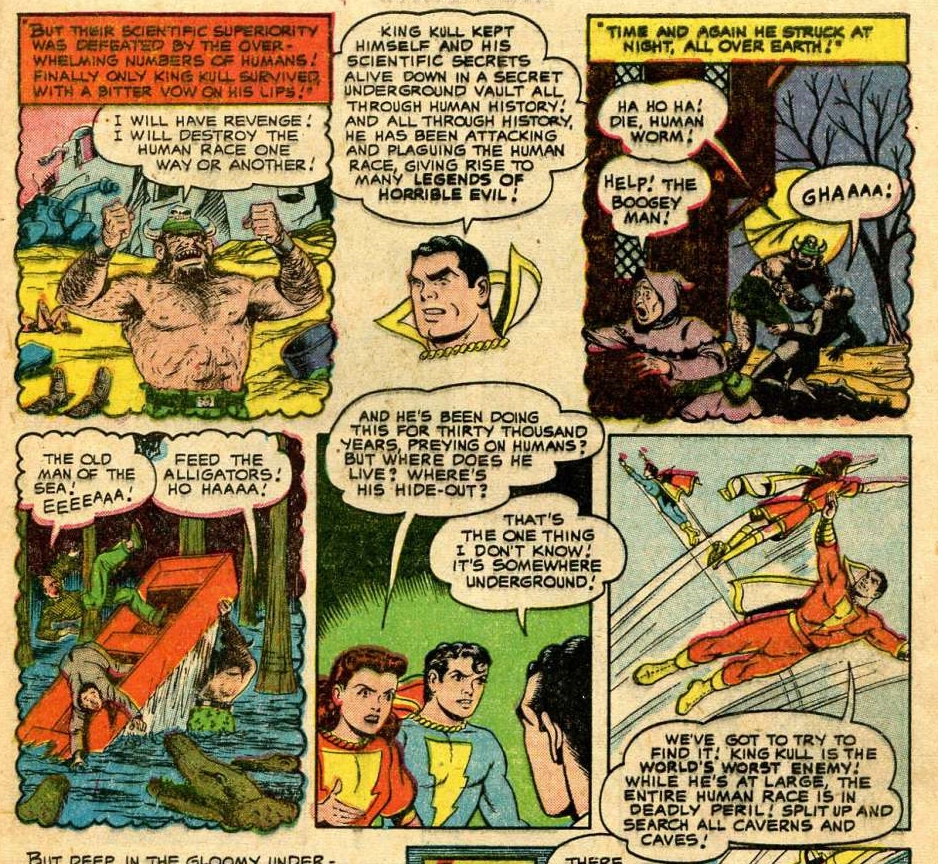 Not to be confused with the Sword and Sorcery hero Kull the Conquero, King Kull is a prehistoric “beast man” who ruled the Submen race in 28,000 BC. The Submen were savage, but also technologically advanced ( think Star Trek’s Klingons). They ruled humanity until they were overthrown in a revolt thousands of years ago, and King Kull was placed in suspended animation till the 20th Century. He awoke and joined the Monster Society of Evil. 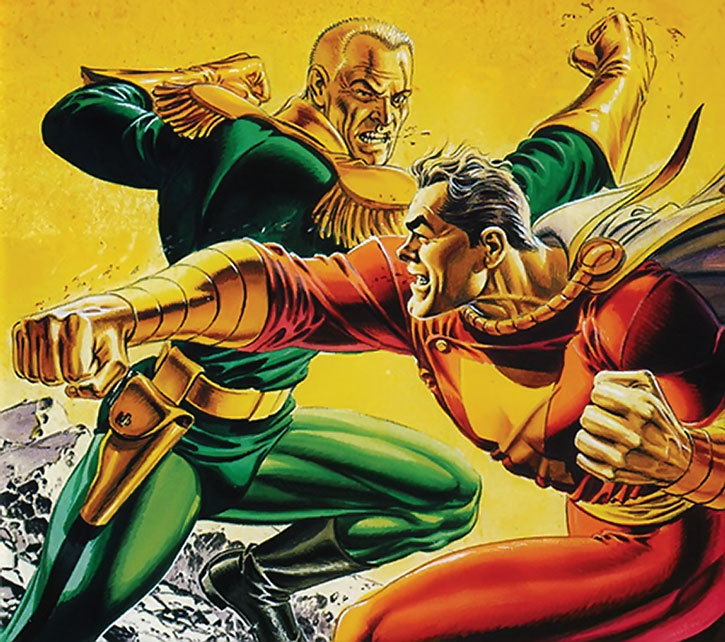 Now more than ever, we would like to see a despicable Nazi bad guy in a movie, so the righteous thundering fists of Shazam and knock them right across the teeth. It would be cathartic for everyone. Albrecht Krieger received powers from Hitler in World War II, and was subsequently frozen to organize the 4th Reich in modern day. Boy would we would like to see Shazam kick his ass on screen.