Forget the water cooler, daily office dwellers! For what you have before you is what you’ve really always wanted to gather around for discussions of the latest bingeable series or your poorly executed lunch order: It’s a giant paper dragon that spans nearly 43 feet from tail tip to end of flaming breath, made in honor of the final season of Game of Thrones.

The giant dragon is the masterwork of artist Andy Singleton, who worked with the British office supplies company, Viking, to create the incredibly well-crafted paper sculpture. Although Viking, which is located in the U.K., originally uploaded the clip of the scaly beast to honor the final season of Game of Thrones, it’s now calling for people to check it out once again because of World Dragon Day taking place on October 5. And while that sounds like another twitter holiday that’ll only result in a mildly amusing hashtag, there’s no excuse needed to check out this paper dragon. 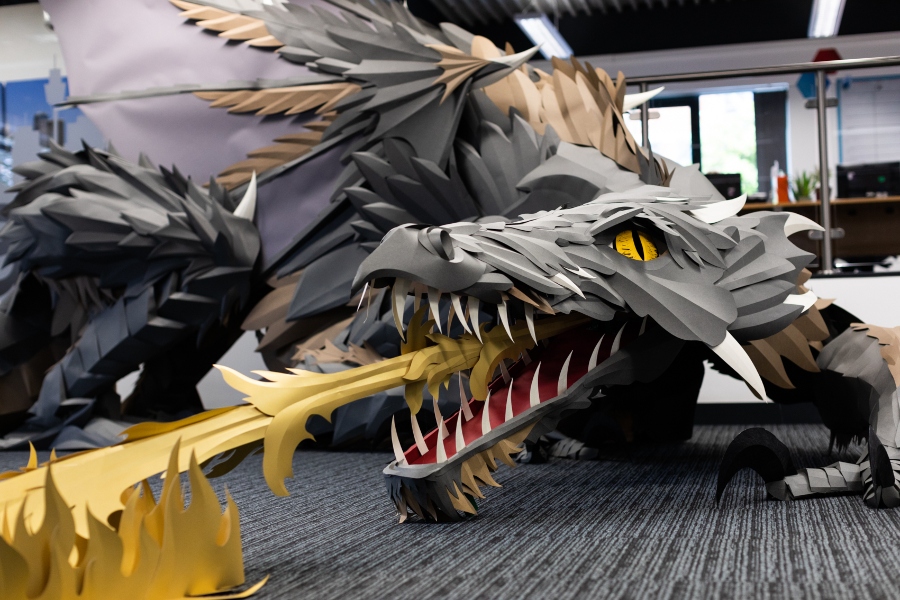 Not only is the paper dragon enormous—its wingspan is nearly 20 feet long and its body is nearly nine—it’s also made with the utmost attention to detail. Viking notes that the dragon took Andy and company 100 hours to build across ten full work days; the installation took another 10 hours on top of that and was complicated by the fact that the one of the goal’s of the project was to surprise Viking employees with something incredible.

But the dragon was built and installed, seemingly without a hiccup, and it literally made employees’ jaws drop. Which will happen to you as well if you check out Singleton’s work on Instagram. Seriously though, who else wants a paper sculpture in their home now?

What do you think of this enormous office dragon? Do you love the paradoxical nature of a fire-breathing creature made out of paper as much as we do? Let us know in the comments!