In the late ’70s and early ’80s, playing Dungeons & Dragons was all the rage across America. Back in the day, the TSR Inc.-produced roleplaying game became a true cultural phenomenon, fascinating teens and adults alike. And like any good pop culture obsession back then, it had an officially licensed magazine to go along with it. Starting in 1976, TSR published Dragon magazine, the monthly guide to all things D&D. And if you’re wondering, yes, there was a companion magazine called Dungeon.

Now, thanks to Boing Boing, we’ve discovered that someone has dug up some old Dragon pages that showcase the stats of some very unusual (bet famous) playable characters. In the April 1981 issue of Dragon, issue 41 to be exact, many iconic cartoon characters had their official stats published. These include Warner Bros. animated characters like Bugs Bunny, Daffy Duck, Marvin the Martian, and the Tasmanian Devil. They describe Bugs as “the last of a race of Lepus Sapiens,” and a native of “the Plane of Kartuwin.” (We see what you did there). He is, of course, Chaotic Good.

Popeye the Sailor Man also joined in the fun, as did Donald Duck a year later. We can’t help but wonder how Disney felt about one of their characters in a magazine celebrating a game that many parents in America labeled as “Satanic.” Dragon gave them the title of “Saturday Morning Monsters.” Even corporate mascots made the cut. Because the Jolly Green Giant had an entry too. Although really, a green giant who shouts “Ho-Ho-Ho” seems tailor-made for the fantasy world of Dungeons & Dragons already. He just needs a battle ax. 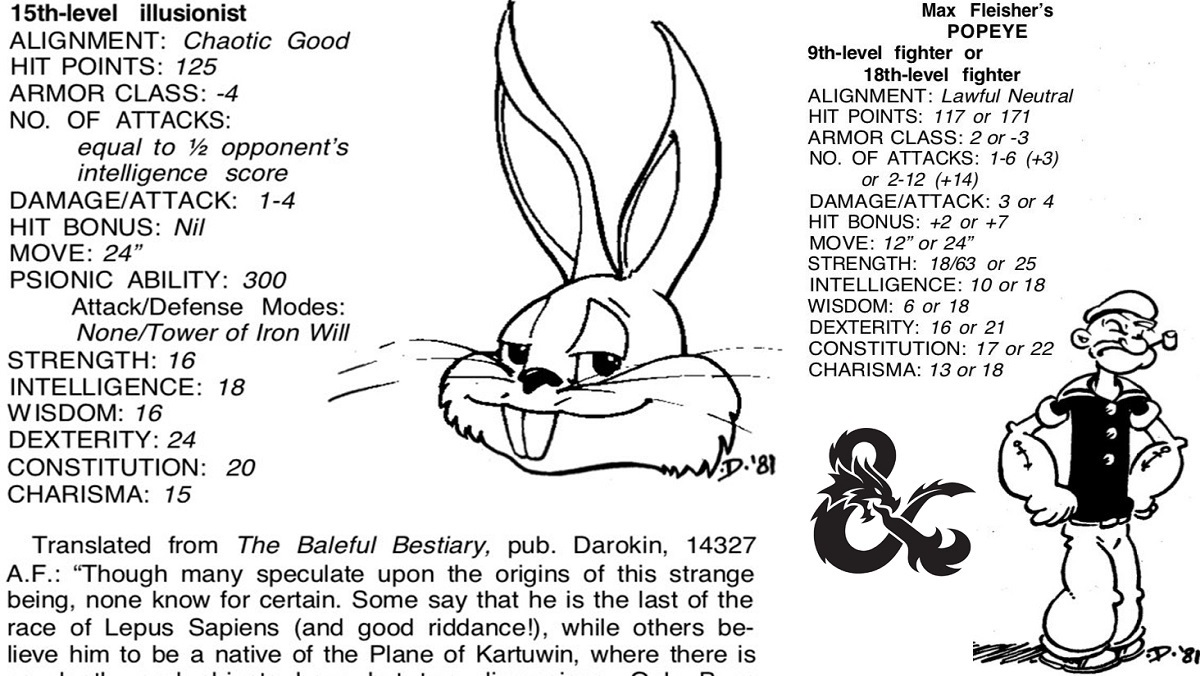 This kind of flagrant copywriter violation would almost assuredly not happen now. But this was a different era, before the internet. And it probably all flew under the radar. Still, we hope there was a D&D campaign where the noble Bugs and his knight-in-arms Daffy took on Popeye of the High Seas and champions Rocky and Bullwinkle. Maybe we see it in a future season on Stanger Things? If so, here’s hoping Dustin gets dibs on Daffy Duck.