When most people think of Saturn, they usually think of its rings, which are so grand they can easily be seen through a telescope here on Earth. But what usually can’t be seen as easily are Saturn’s many, many moons, which include among them at least one that may support life. As well as these 20 new ones that have just been discovered, which, while relatively tiny, still give Saturn the record for planet with the most moons in the solar system. 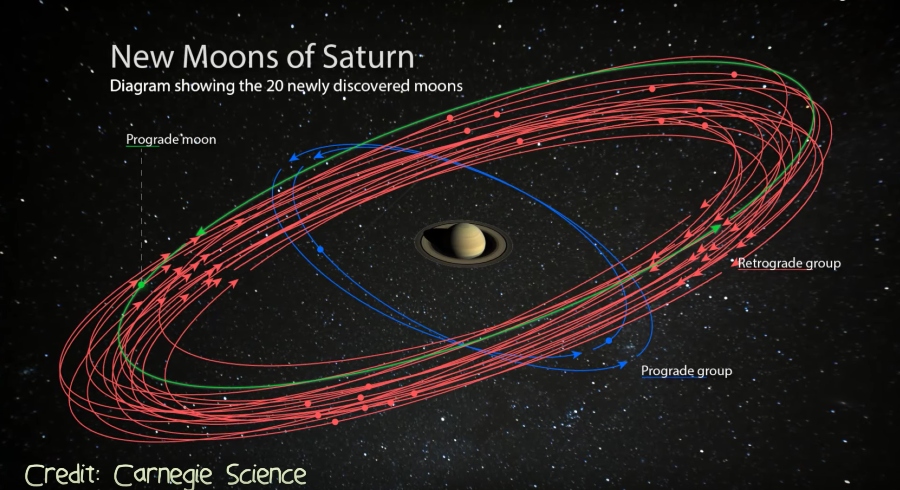 A diagram showing the orbits of the batch of new moons. Carnegie Institution for Science

Astronomers at the Carnegie Institution for Science, led by Scott S. Sheppard, announced the discovery of the collection of moons on October 7 at the International Astronomical Union’s Minor Planet Center. “Using some of the largest telescopes in the world, we are now completing the inventory of small moons around the giant planets,” Sheppard told his audience. He added that “They play a crucial role in helping us determine how our Solar System’s planets formed and evolved.”

Compared to Saturn’s well-known moons, including ones like Enceladus, Titan, Hyperion, and Rhea (among others), these new ones are quite tiny. For example, Titan, Saturn’s largest moon, is roughly 3,200 miles in diameter. These new tiny moon-tots? Only about three miles in diameter. But even though the newly discovered Saturnian moons are small, they still bring Saturn’s total moon count up to 82, which beats out Jupiter’s former-record number of 79. Plus, as mentioned, the moons offer new clues as to how Saturn formed in the early solar system.

Here’s a web visualization of the #Saturn system with an option to highlight the new moons:

“The fact that these newly discovered moons were able to continue orbiting Saturn after their parent moons broke apart indicates that these collisions occurred after the planet-formation process was mostly complete and the disks were no longer a factor,” Sheppard added in his announcement. Sheppard and his team also say that the way these moons are orbiting Saturn — with seventeen of the twenty orbiting in retrograde, or in the opposite direction of the planet’s rotation — means that they were once subject to “violent collisions… between moons in the Saturnian system or with outside objects such as passing asteroids or comets.”

One of the most exciting parts of this discovery, aside from all of the important science, of course, is the fact that Sheppard is going to let regular people name the new moons — although name suggestions are limited to those from Gallic, Norse, and Inuit mythology. You can find more details here and in the contest explainer video below.

What do you think of these new Saturnian moons? Do any good Norse names come to mind or is Scandinavian mythology not really your thing? Let us know in the comments!