You Had Me At Robotic-Bear-Laser-Tank - Nerdist

You Had Me At Robotic-Bear-Laser-Tank

XYbrid-which just met its funding goal on Kickstarter-is a game of assembling monsters a la Dr. Frankenstein. From Centipede Legs to Telescoping Arms to Slime Mold Computer Heads, there are over half a billion possible combinations for your monsters. These monsters are sent on missions and powered up via breakthrough cards in a quest for bizarre medical infamy.

Monsters are constructed by stacking a number of transparent plastic cards atop each other. Monster bits and pieces are brightly colored and standout from whatever tabletop surface you’re playing on. The transparent cards then allow your monster to grow organically-or scientifically-over the playing surface in a macabre Build-A-Bear.

Once built, monsters are scored following an opportunity to play breakthrough cards. These can provide additional scoring opportunities or mess with the plans of your opponents. Monsters are then deployed and score points based on the unique combination of bits and gears you’ve managed to assemble. While players are only ever working on one monster at a time, deployed monsters may be able to impact the battlefield through Missions. 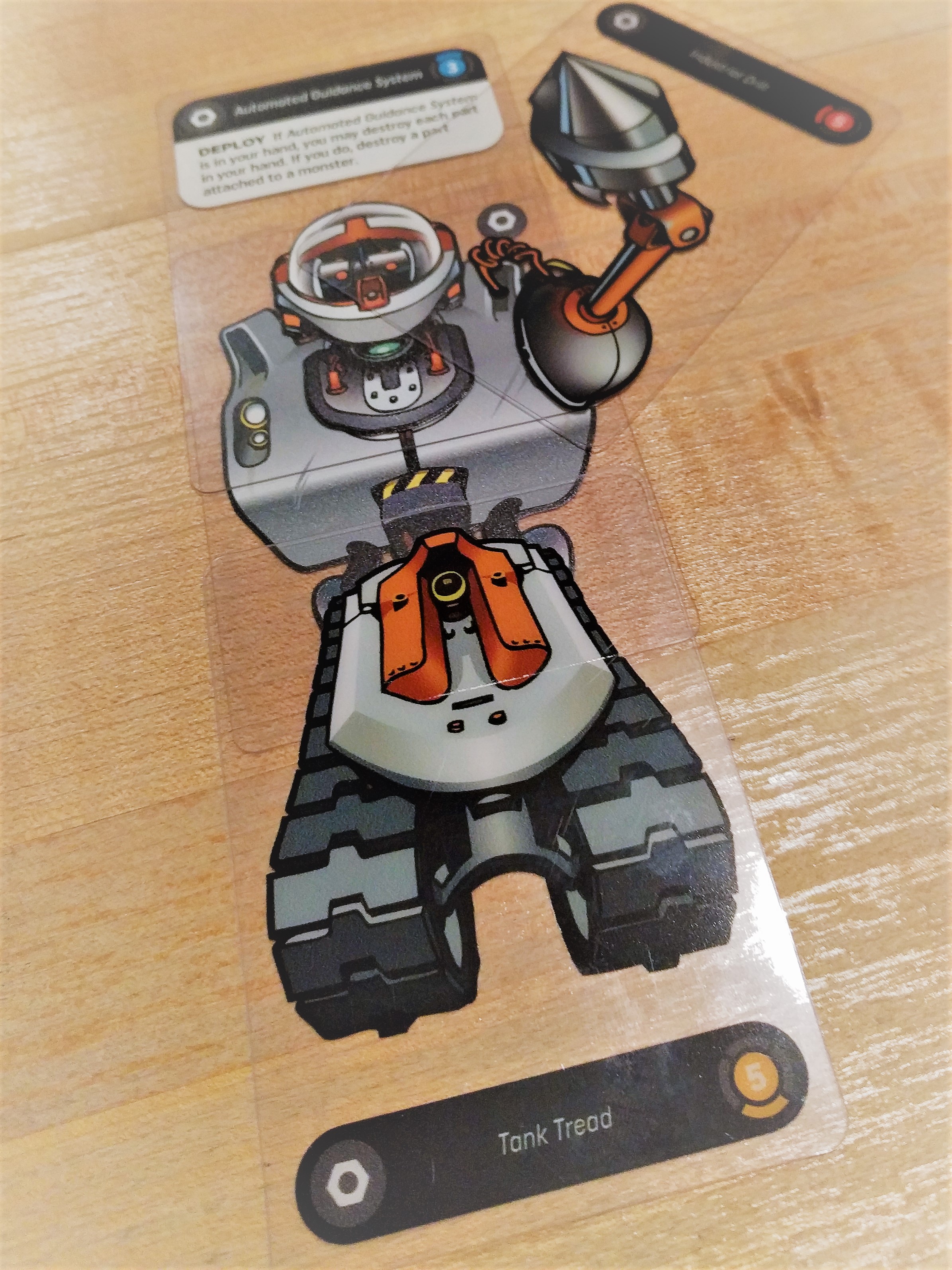 While there are strict building requirements-all monsters need a head, for example-opportunity to get creative exists in auxiliary parts. These run the gamut from Fuel Cells to Chemiluminescent Lures and provide bonus points or abilities while also extending the round. Once all player’s monsters are complete, the round immediately ends. Balancing extending the round through auxiliary parts and grabbing the powerful arms you may need looks to be a key part of the strategy.

Some of these appendages have mission effects; these abilities activate from the Deployed pile on future rounds. A Neurotoxin Stinger will destroy part of an opponent’s monster while a horrendous insectoid pincer scores points by dissembling your own monsters piece by piece! All of this is happening while you’re trying to draft cards from the face up Lab, balancing your own synergy with blocking your opponent from attaching an Eagle Head onto his levitating robotic cyber bear.

XYbrid plays 2-4 players in a snappy 30 minutes and looks to be friendly to both new players and experienced players alike. The transparent cards look to be more than a simple gimmick. They’re necessary to provide the visual punch and ability to literally assemble your creations on the table. I’m always on the lookout for light card games that standout from the pack, and XYbrid’s Robotic-Bear-Laser-Tanks look to do just that. You can check out the Kickstarter campaign here.

What’s your dream monster combination? A Bear Mantis with Laser Arms is staring at you: what do you do? Let us know in the comments!