Have you received your invitation to the X-Men’s Hellfire Gala yet? Well, seeing as you’re just a regular Homo sapien, you’re probably not on the guest list. If you’re wondering what we are talking about, the mutant nation of Krakoa is throwing a very fancy soiree. One where guests are expected to dress up to the nines. Something akin to the real-life Met Gala, only with powers. It’s called the Hellfire Gala after the mutant’s Hellfire Trading Company. The formerly villainous Hellfire Club now runs mutant trade with the outside world.

The event is taking place across 12 issues of X-Men comics this spring, including the June one-shot comic Planet-Sized X-Men. It will result in an all-new X-Men team, one where fans got to vote for members. Much of the formal wear is designed by Russell Dauterman, Stephen Segovia, and other Marvel Comics artists. In Marvel’s Hellfire Gala Guide, which is available for free at your local comic book shop, you can see all sixty-four designs for the Krakoan mutants’ inaugural ball. As with any high fashion event though, the fashion must be critiqued. I’m here to channel Joan Rivers, and give props to best dressed, and shred the worst. May the best X-Man win! 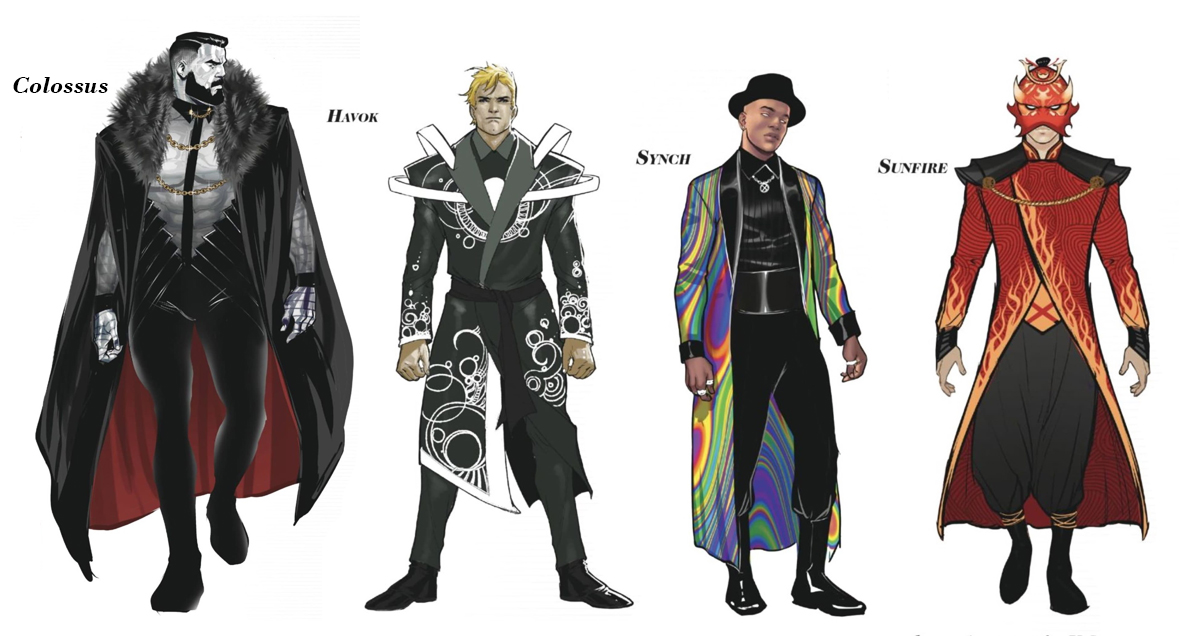 Say, does anyone know the Russian word for “Daddy?” Colossus has us practically swooning in his sheer top and black fur-lined cape. We bet a certain Kate Pryde is having second thoughts about leaving Piotr Rasputin at the altar now. Meanwhile, Havok has a very eye-catching look that evokes his classic costume, but elevates it to high fashion. Former Generation X member Synch looks very smooth in his black suit with a stunning iridescent coat. Rounding out our “best dressed” dudes is Sunfire. Although I tend to loathe baggy pants like these, the way he channels his Japanese culture for this look is pretty impressive. 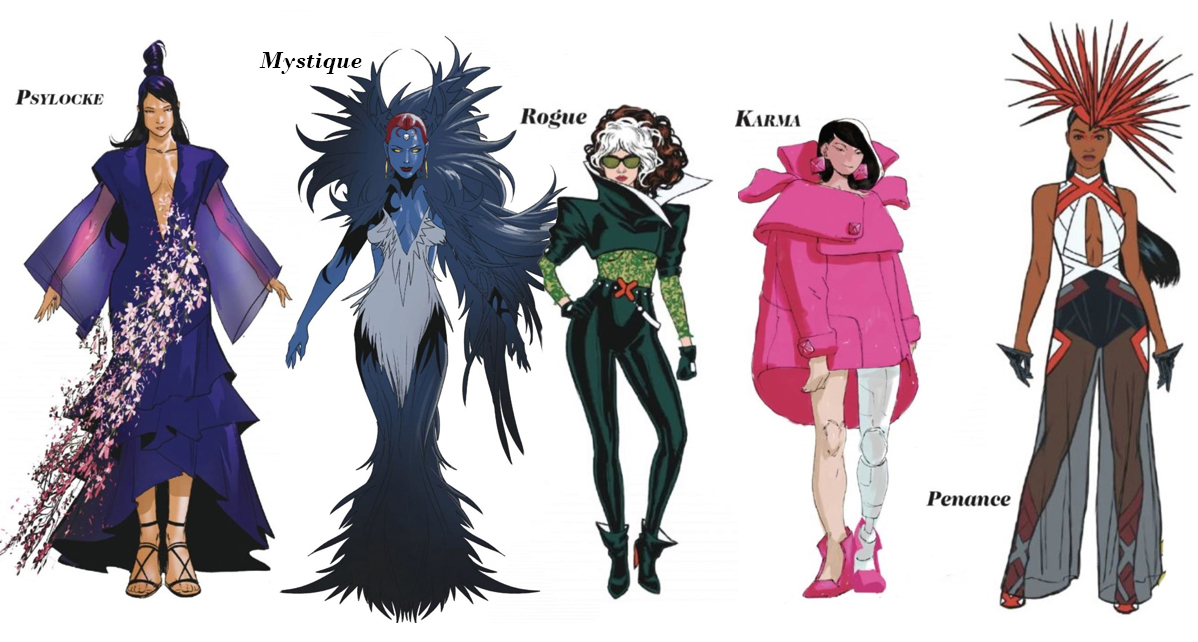 It is really the X-Women who are slaying the red carpet at the Hellfire Gala though. Psylocke is a vision in purple. We’re not sure how those flowers are staying up on her dress, but maybe that’s a secret mutant power. Mystique has us literally gagging with her elegance. We’re not sure what kind of feathers those are, but who cares. She looks like a classic Disney villain (hey wait, now she is one!)

Her daughter Rogue was a character born of the 1980s. So it makes sense she’d rock an ’80s-inspired look for the Gala. She’s like a Patrick Nagel painting come to life. Founding New Mutants member Karma is rockin’ some avant-garde Tokyo street fashion, and it’s very chic. Finally, Penance outfit is smoking,’ but that fascinator on her head is as dangerous as she is. And we are living for it. 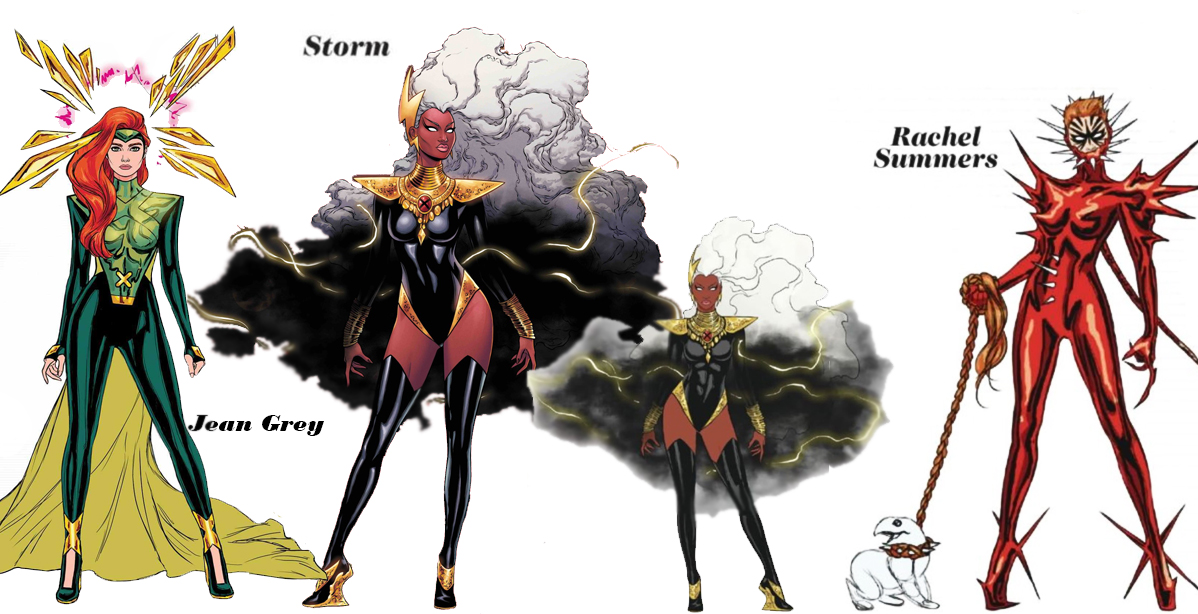 Now we’re getting to some X-Ladies who are practically mutant royalty. Jean Grey is stunning in her traditional Phoenix green. Her daughter Rachel Summers outdoes her though. She’s taking a painful part of her past, her time as a mutant-hunting hound, and transforming it into some seriously out-there fetish fashion. We’re not sure where the pet warwolf came from, but it’s a great accessory. Once again however, mutant goddess Storm simply kills it. She evokes her classic gold and black costume, but uses her powers to create stormy clouds as her cape. Ororo Munroe, you are not one to be outdone.

Stop Relying on Those (Super-powered) Bodies 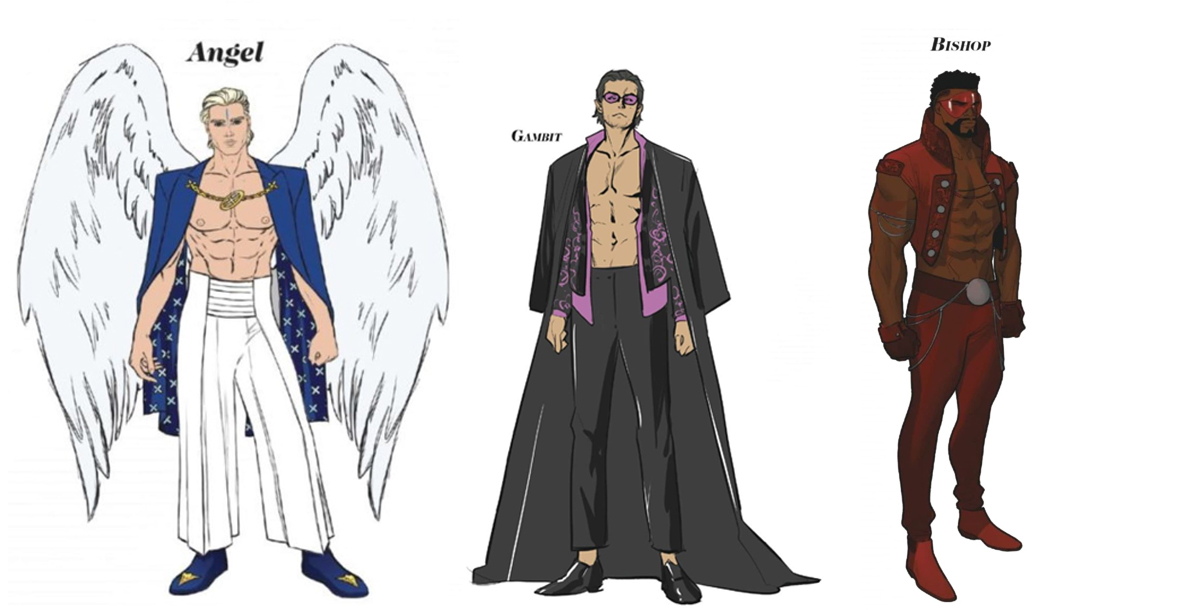 Ok, let’s get to the less-than-stunning looks. Angel/Warren Worthington III, you’re a literal billionaire. You can afford more than white slacks and an open shirt showing off your abs. And Gambit, I thought they had good taste down in New Orleans? Your look isn’t ugly, but just an open black shirt with black pants is not fashion-forward. Bishop, the same goes for you. This is the inaugural Hellfire Gala fellas. It’s not just about showing off your six-pack. As RuPaul’s Drag Race judge Michelle Visage always says, “ stop relying on that body!

And these guys, well…. they tried. Jamie Madrox, the Multiple Man, looks more like a ’60s supervillain than high fashion. Blame this one on one of your duplicates when asked, Jamie. Warpath looks like a character from a rival comics universe — The world of Batman: The Animated Series! But props for those incredibly dangerous-looking shoulder pads. Who put those on him?

And finally, there’s Iceman (Bobby Drake.) Bless his heart, he tried. I love that the recently openly gay X-Man is embracing the genderf#@k aesthetic. Wearing a dress and heels? Tres awesome. But everything looks unformed. The skirt, shoes, and ice wings have no details. Next year, don’t let Emma Frost outdo you in the whole “Ice Queen” look, ok?

Hey Cyclops, the ’80s called. They want their rejected X-Factor uniform back. There is nothing elegant or high fashion about Scott Summers’ outfit. This gets a big YAWN from me. And Wolverine’s son Daken is wearing something you’d wear to a nightclub, not a red carpet event. And he’s not even wearing shoes! This is a travesty. Also a travesty is the boring tuxedo of Beast. He needs to wear shoes too. Sorry, this is just beneath a founding member of the X-Men. Finally, there’s classic New Mutants member Warlock. I know, you’re a techno-organic being. But you can use your power to give yourself more than a bowtie.

These X-Women are fierce. But their fashion? Not so much. Gloriana, who you might remember as Meggan from Excalibur, looks like she’s cosplaying Pinocchio’s Blue Fairy. And Kate Pryde has always had questionable taste in costumes. But this weird mash-up of Scottish highlanders and pirate captains is not working for me at all. Meggan and Kate, this is a Gala, not Renn Faire.

Wolverine II, the former X-23, is actually wearing quite a cute outfit. For off the rack. Again, this is an haute couture event girls. “Cute” doesn’t cut it. (Even with those claws.) And the disappointment of Dazzler’s look is profound. The Disco Diva of mutants is wearing a pantsuit? No, covering it up with a light show of your powers does not make up for how boring this is, Alison! You had better bring it next year. Your name is Dazzler. Live up to it.

As not to end on a sour note, I saved the best for last. I simply must give props to the Hellfire Gala’s MVP. The organizer of the whole event, Miss Emma Frost. Like Lady Gaga at the 2019 Met Gala, she slayed several different looks for this event. And they were all absolutely stunning. (Look and learn, Iceman). She stole the show, just as easily as she stole Cyclops from Jean Grey. You have your work cut out for next’s year’s fashion choice Miss Frost, that’s for sure.

The Hellfire Gale kicks off in Planet Size X-Men #1, written by Gerry Duggan with art by Pepe Larraz, goes on sale on June 6.