Holy Abe Simpson! The world’s oldest spider, a female Giaus villosus living in the hot Australian outback, has died at the age of 43. And it didn’t even die of old age! It died because a wasp attacked it. Wasp up with that? 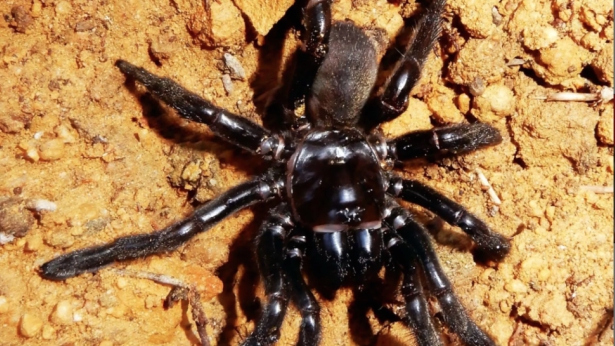 Curtin University put out a release on the spider’s death, as well as brief recap of the research—which was published in Pacific Conservation Biology—that’s been made available thanks to her freakishly long life.  According to Thrillist, these spiders, which are also known as trapdoor spiders, usually only live for about 20 years.

The spider was discovered and studied by a scientist by the name of Barbara York Main (so regal), who found this little frightening fountain of youth in 1974. One can only imagine her chilling like Jane Goodall with her specimens, which in this case were giant black tarantulas that really look like they mean business. Why, here’s one crawling on a window now, looking like it owns the place.

#bigspider greets me at home.

Seriously though, there is apparently a whole Instagram account dedicated to trapdoor spiders. If you’re into spiders, it’ll be great for you to check out. For those of you who respond to spiders like Indiana Jones to snakes, we recommend you stay away. Although here’s just one more picture ’cause it’s crazy.

In terms of the science that came from the spider’s extraordinary longevity, it seems that it will help researchers with everything from group dynamics of spiders to the effects of climate change.

Curtin University researcher and co-author of the published study, Grant Wardell-Johnson, said in a statement that “These spiders exemplify an approach to life in ancient landscapes, and through our ongoing research we will be able to determine how the future stresses of climate change and deforestation will potentially impact the species.”

It seems that if humans are to survive, we must learn the way of the spider…

via Giphy
Are you bummed about this spider death? Do you have even more reason to avoid the Australian outback now? Let us know in the comments!