Work Together On The Tabletop to Fight Grimm in 'RWBY: Combat Ready' - Nerdist

Work Together On The Tabletop to Fight Grimm in ‘RWBY: Combat Ready’

Each week here at Geek & Sundry we’re taking a look at new and upcoming exciting titles on Kickstarter! This week’s Kickstarter of the week is RWBY: Combat Ready, a cooperative board game based on the anime RWBY (which, as of this writing, has surpassed $460K in funding).

Are you ready to join the Huntresses and defend the world of Remnant against the forces of Grimm? Will you stand together with the rest of Team RWBY and fight everything from Beowolves to Roman Torchwick? Rooster Teeth and Arcane Wonders have partnered to bring the fast-paced action of the RWBY series to the table in RWBY: Combat Ready.

Just like the show, RWBY: Combat Ready is about teamwork. It’s a scenario based cooperative game built from the ground up to both feature cooperation and team-based play while giving each character their moment in the spotlight. Players take on the role of one of the main protagonists – Ruby Rose, Weiss Schnee, Blake Belladonna, or Yang Xiao Long – and select one of a few scenarios. These scenarios detail which villains you’ll fight and what the special objectives will be. Details are currently a little light, though the Kickstarter mentions objectives like defeating Grimm or defusing bombs. 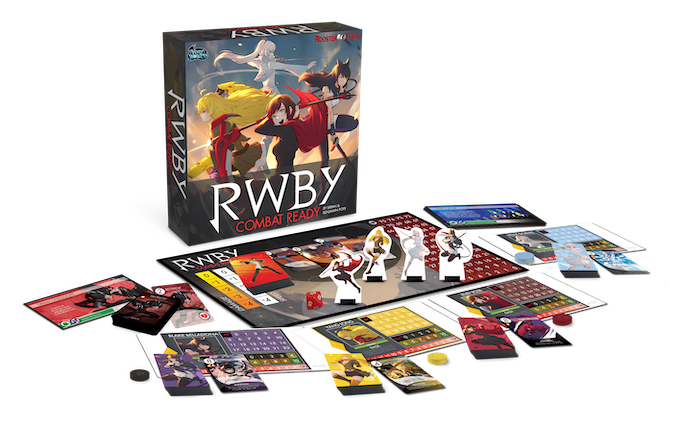 The common feature to all scenarios is a duel. These duels take center stage and are that chance for your character to recreate the fast-paced action sequences of the show. Each character has a unique deck that brings their personality – and fighting styles – into your hand. Round by round you’ll play an attack from your hand hoping that your attack is faster than the enemies. If it is, you’ll wound your enemy and build XP and Fury. XP is used to boost your deck’s power and these boosts can be carried from scenario to scenario, creating your own RWBY campaign. Fury can be unleashed in massive Limit-Break style mega-attacks that will send Roman sailing through building down a city block.

Unfortunately, if you aren’t fast enough then it’s your character who suffers damage and loses all that fury. Villains are also represented by a deck. Each round a card is flipped off the top and compared to the card you play from your hand. This isn’t happening blind, however. Rather than each villain card having the same art on the back, Villains have multiple stances. These beautifully illustrated card backs give the players a hint of what’s coming. An aggressive stance may be your opportunity to play a powerful counter-attack, while seeing Roman in a subtle stance may force you to play cautiously lest you risk being stung by a special attack.

Meanwhile, teammates are focusing on the scenario objectives. They’ve got to keep the Grimm from overrunning the board or the bombs from exploding. If they can manage to catch a breather, they can even support the main character offering them speed boosts, bonus damage, or more. Players rotate through duels ensuring that everyone gets a chance to beat up on the villain before the end of the scenario.

You can secure a copy of RWBY: Combat Ready by backing the Kickstarter campaign. Rooster Teeth has created a vivid world of rich characters, and Arcane Wonders has a fantastic track record in the board game world. We’re excited to see the world of RWBY on our tables soon.

If you’re looking to stay dialed-in on the best of boardgaming, be sure to catch our tabletop game show, Game the Game, hosted by Becca Scott! Game the Game airs live on Twitch and Alpha every Wednesday at 4 PM PT.

In addition to Geek & Sundry, Raf Cordero writes for Miniature Market’s The Review Corner and co-hosts the gaming podcast, Ding & Dent. Chat with him on Twitter @captainraffi.