Patty Jenkins’ first  Wonder Woman film was extremely faithful to the comic book origins of the character. But it left out one crucial element of Princess Diana’s backstory: the Amazonian contest. The contest is an Olympic Games-style tournament where the Amazons compete against one another in various forms. The competitions range from hand-to-hand combat to gymnastic feats. It’s all in the name of proving who is the greatest Amazon of them all. In Wonder Woman 1984, Jenkins found a way to incorporate this iconic piece of of DC Comics’ mythos into the live-action universe.

Wonder Woman 1984 transposes this event to Diana’s childhood, whereas in the comics she experienced it as an adult. But the film isn’t the first time the contest has been reinvented. It’s been retold and reinterpreted for different generations and for different mediums.  Here’s the nearly 80-year history of the Amazons’ contest of champions.

In Wonder Woman’s 1941 origin story, the Amazonian contest is there right from the start. Back then, it only took up a handful of panels. One of the more ridiculous aspects of the story found Diana, forbidden by her mother from participating, joining anyway in disguise. Diana used a tiny domino mask to cover her identity. I guess it’s no more ridiculous than Clark Kent’s glasses, but it certainly seems silly in the modern day.

It’s noteworthy as well that the original version of the Amazonian contest is more an Olympic-style tournament, less about fighting prowess. Part of the original challenge was outrunning a stag! Of course, one violent aspect was the bullets and bracelets challenge, which actually injured an Amazon in the original comic book. It was rare to see blood in a comic of that day, but you saw it there. This version of the contest was very much the template going forward. 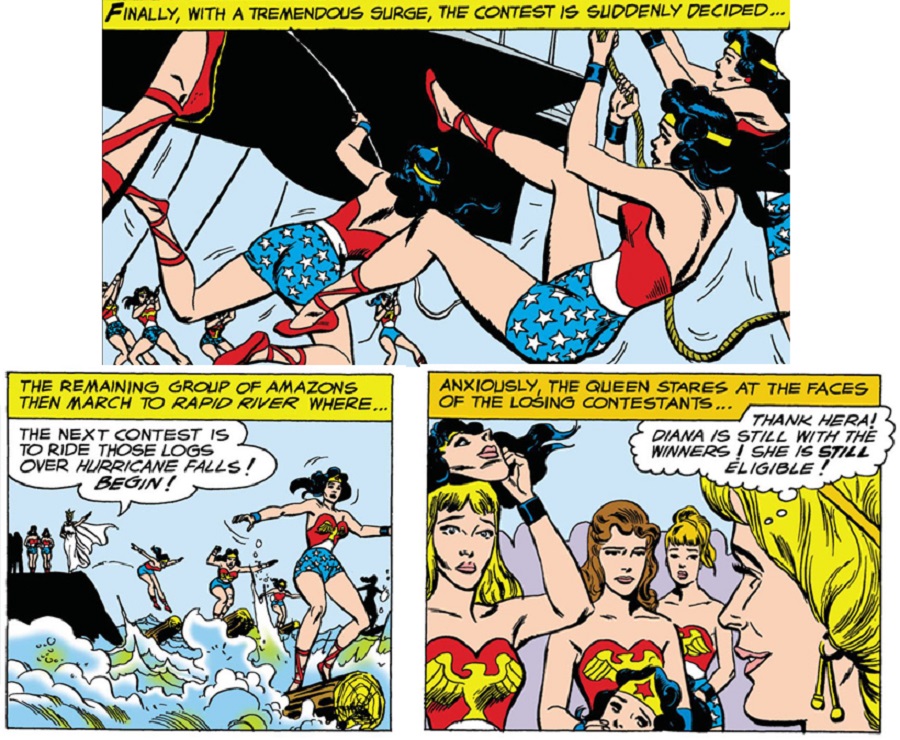 The first change to the contest story came in 1958, at the dawn of comics’ Silver Age. This retcon had Diana as Wonder Woman in costume before leaving for Man’s World, which kind of makes no sense. In order to make sure that everyone didn’t know they were competing against Diana, Queen Hippolyta ordered all the Amazons to disguise themselves as Wonder Woman. It’s a wacky concept, and one quickly dropped from continuity. Going forward, most references to Diana’s competition have only called back to the original ‘40s version. Which is for the best.

The original pilot for the Lynda Carter Wonder Woman  TV series also recreated the classic origin story, pretty much intact. Much like the original comic book origin from William Marston, it included the Amazon contest. This was less hand-to-hand combat, more Olympic games. One big change had Diana not just wearing a flimsy mask, but also a blonde wig. I guess that was supposed to make her mother not recognize her? Oh well. Baby steps.

Challenge of the Super Friends (1978)

The 1978 Super Friends cartoon series also featured Wonder Woman’s classic origin…with a twist. The evil Legion of Doom decided to go back in time to undo the origins of the Justice League, including that of Wonder Woman. Her arch-nemesis Cheetah disguised herself as an Amazon, and fought in the contest. She won, using her “catlike skill,” becoming Wonder Woman instead of Diana. Naturally, history corrected itself. But it was nevertheless fun to see DC history come to life on Saturday morning television. 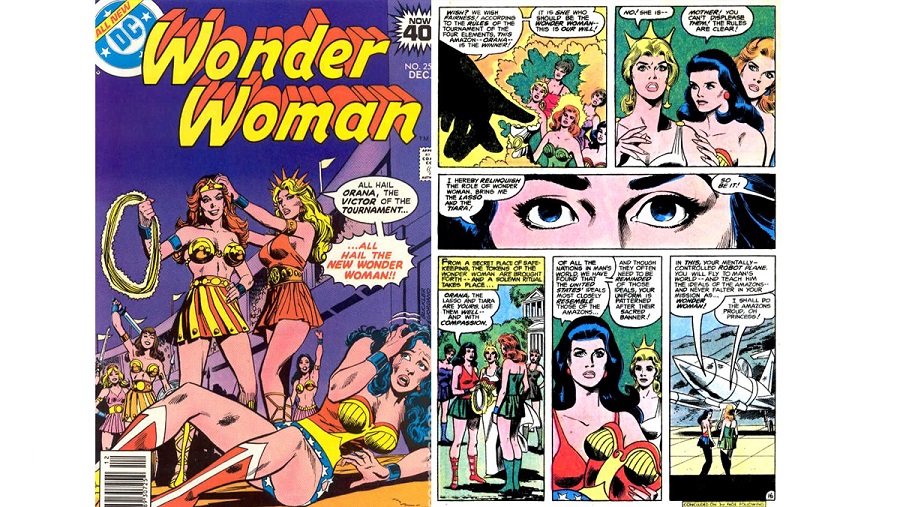 During the late Bronze Age of comics, Diana had to undergo the contest a second time. This occurred when a fellow Amazon challenged her for the right to be Wonder Woman. This time, Diana lost the challenge, and her Amazonian sister Orana donned the costume. The fiery redhead was far more headstrong that Diana, but this disposition ultimately cost Orana her life. Diana of course, would assume the title of Wonder Woman again shortly thereafter. This lesser known story was the template for another tale that would come later in the ‘90s. That saga, which you’ll see more about down below, had Diana and an Amazon named Artemis face off for the right to be Wonder Woman. A contest Diana would lose.

In the wake of DC’s continuity-shattering Crisis on Infinite Earths, Wonder Woman’s mythos were completely rebooted by writer/artist George Perez. In this new iteration, the Amazons lost all their sci-fi trappings. Perez reinvented them totally as warriors out of Ancient Greek myth. For this updated version of the contest, all the Amazons had to wear helmets with masks, as to not let emotional attachment between sisters influence their performance. As one gifted by the Gods, Diana easily won this competition as well, becoming Wonder Woman. 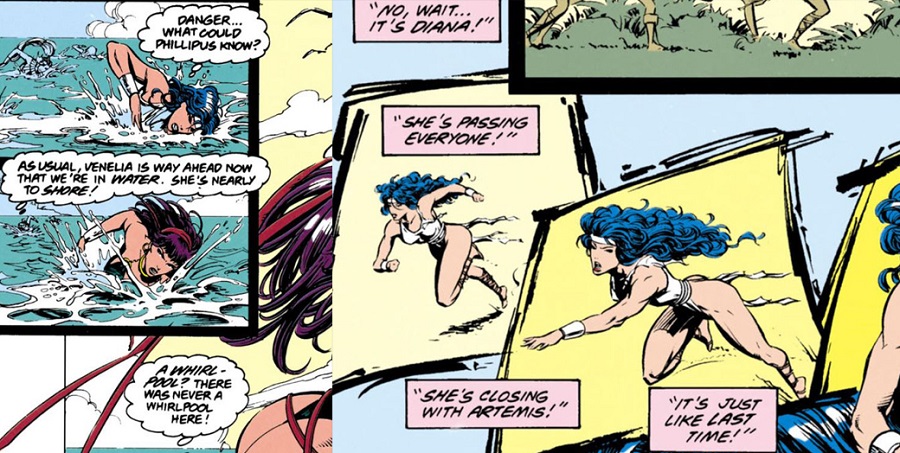 After the glory of the George Perez years, Wonder Woman comics suffered a slump. The ’90s were an era of extreme art styles, and not a great period for how women were portrayed in mainstream comics. Artist Mike Deodato took on Wonder Woman’s art duties. Suddenly, every Amazon was scantily clad. It was… a choice. And it certainly hasn’t aged very well.

But sales went up, and DC began a story where Diana’s mother forced another contest for Diana to prove herself worthy of being Wonder Woman. All because she had a vision of Wonder Woman’s death, and was trying to save her daughter. This time, Diana lost to Artemis, an Amazon based very much on the now-forgotten character Orana. Artemis was far more popular, and is still around today. After a period wearing a terrible black leather biker outfit, Diana returned to the role of Wonder Woman. Thank Hera.

The animated Wonder Woman direct-to-DVD movie also featured the classic contest as part of Diana’s origin. And it didn’t stray too far from the modern comics canon. It is probably a little more brutal and bloody than we’d seen in that past, lending to the PG-13 rating. A big difference from the comic book version: the bullets and bracelets portion of the competition is an “arrows and bracelets” contest instead. Which makes a ton more sense. 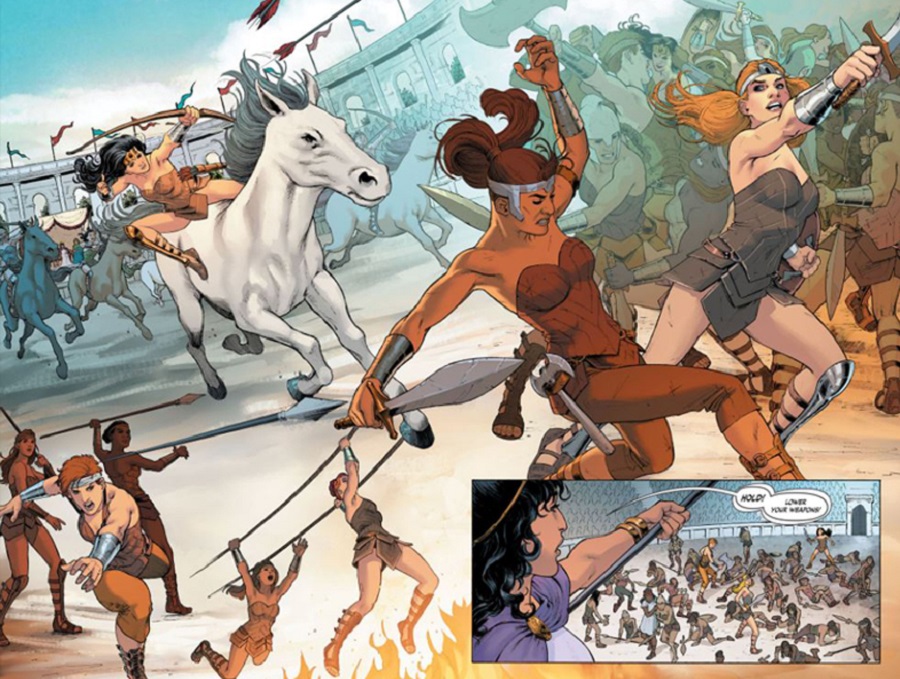 The New 52 reboot of Wonder Woman from 2011 didn’t really show us the contest, but the 2016 Rebirth origin story did. And writer Greg Rucka pretty much kept to the classic version. It was a little more George Perez, with a dash of Golden Age flavor. This is the most recent version of the contest in comics continuity. Judging from Wonder Woman 1984, director Patty Jenkins definitely took some cues from it.