Wonder Woman made an Amazonian-sized splash when it was released in summer 2017.

Fans responded warmly to the DC Comics movie, embracing Gal Gadot‘s Diana Prince and her journey into the world of humans. From Themyscira to the trenches of World War I, Diana fought to see the beauty in those around her and to save the planet from Ares, the god of war. She learned much about good and evil and hope, and even though she lost someone close to her, she kept fighting. And we can’t wait to see more of that in the film’s sequel.

So what exactly will we see in the sequel? Let’s look at everything we know about Wonder Woman 1984 so far. Bookmark this page and check back for updates.

The Trailers and Poster

The first trailer for the film finds the Amazonian goddess in the era of greed and glamour known as the 1980s. Although the trailer shows that her great love Steve Trevor miraculously returns from the dead, we still don’t know how that’s accomplished. The music in the trailer is an orchestral arrangement of New Order’s 1983 hit “Blue Monday.” We see Diana kick bad guy butt in a shopping mall, and we see both Wonder Woman and Steve Trevor inside the cockpit of a plane. Is that plane perhaps… invisible? We will have to wait and see.

On August 21, we got a look at a particularly vibrant piece of art advertising the upcoming film. Director Patty Jenkins tweeted the film’s new official poster, which is notable both for its color scheme and for its central figure’s magnificent wingspan.

Then on August 22 during DC FanDome, Patty Jenkins and the cast shared a new trailer showing off Cheetah’s full transformation: 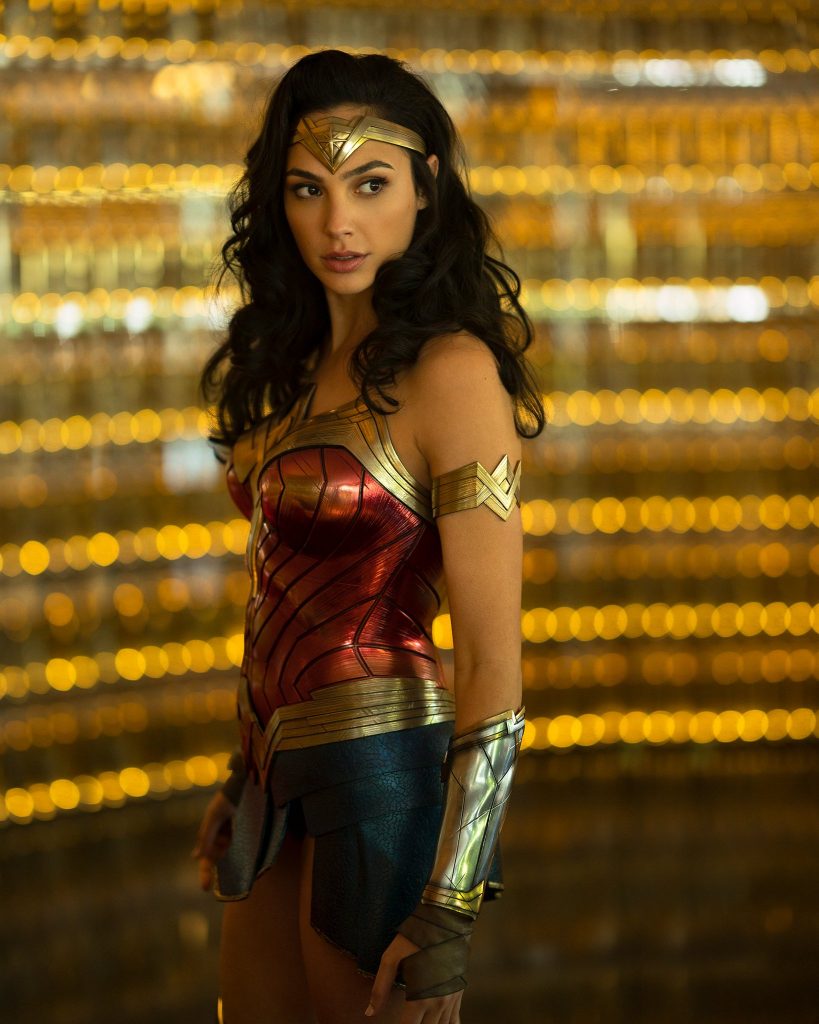 Wonder Woman 1984 is  now set to arrive in movie theaters on December 25, 2020. The coronavirus caused the original release date to change a couple of times now. From Variety: “Patty is an exceptional filmmaker and with Wonder Woman 1984 she has delivered an incredibly dynamic film that moviegoers of all ages around the world will absolutely love,” said Toby Emmerich, Warner Bros. Motion Picture Group chairman. “We’re very proud of the film and look forward to bringing it to audiences for the holidays.”

As of November 18, 2020, the film is still arriving on Christmas Day but with a twist: Wonder Woman 1984 will also debut on HBO Max at no additional cost on the same day.

Patty Jenkins has returned to the world of Wonder Woman to direct the sequel. She co-wrote the script with Geoff Johns and Dave Callaham.

.@GalGadot takes flight in her radiant return as Wonder Woman! 👊 For our March cover, she shares an inside look at Wonder Woman’s journey from WWI to the neon-soaked ‘80s in #WW84: https://t.co/1diJ13YMFO Story by @Leahbats pic.twitter.com/FBw7WdMWHa

“Fast forward to the 1980s as Wonder Woman’s next big screen adventure finds her facing an all-new foe: The Cheetah.” That’s Warner Bros.’ official description for Wonder Woman 1984, set in—you guessed it—1984. That puts the movie in the thick of the Cold War. During an appearance at San Diego Comic-Con, Jenkins said, “Eras are important.” She thinks 1984 was a time when humankind was at its best and its worst; she wanted “to see Wonder Woman at a time that’s pretty much us at our most extreme. Everything we were doing right then, we thought would go on forever.” A Wonder Woman movie wouldn’t exist without Wonder Woman, so obviously Gal Gadot is back as Diana Prince. She now works for the Natural History Museum in Washington, DC. Her Wonder Woman costume seems to be a little brighter, too. She’ll even get a new iconic comic book costume: Wonder Woman’s golden armor. We know from the trailer that she’s still helping humanity, although her destruction of security cameras in the mall suggest she is keeping her role as Wonder Woman a secret from the world. She’s not the only person coming back. Chris Pine will be costarring as Steve Trevor… somehow. He definitely died at the end of the first Wonder Woman, set some 60 years earlier than Wonder Woman 1984, but he’s here and wearing a track suit. Why? How? It is a comic book movie, so it’s not completely impossible.

Also returning are Connie Nielsen as Diana’s mother Queen Hippolyta and aunt Robin Wright as her sister Antiope. The two are featured in a flashback which takes us back to Themyscira. It appears that we will see one portion of Diana’s origin story that was missing from the original film: the contest of Amazon championship. Kristen Wiig was the first new cast member announced for Wonder Woman ’84. She’s portraying Barbara Ann Minerva, a.k.a. Cheetah. The character is both a friend and enemy to Diana in the comics, and it’s looking she’ll be both in the upcoming film. The pair are colleagues at the Natural History Museum, where Minerva is a gemologist. Pedro Pascal is part of the Wonder Woman 1984 cast, too. He’ll be playing ’80s tycoon Maxwell Lord, a character who once bankrolled the Justice League in the ’80s. Here, he’ll be portrayed as TV self-help guru, who makes millions from selling people the chance to make their dreams come true. He’s apparently the real villain of the film. Famously, he was once killed by Wonder Woman in the comics in a last-ditch effort to save Superman from mind control.

The Hindu confirms Soundarya Sharma is also part of the cast. Sharma said, “It’s exhilarating to be a part of such a larger than life character film where you get to play your dream role.” Given her quote, it sounds like she has a sizable part.