Is a DOCTOR STRANGE Time Loop the Key to AVENGERS: ENDGAME? - Nerdist

Is a DOCTOR STRANGE Time Loop the Key to AVENGERS: ENDGAME?

by Michael Walsh
Ever since Doctor Strange gave Thanos the Time Stone in exchange for Tony Stark’s life, fans have been trying to decipher what the sorcerer’s covert plan to save half of all life in the universe might be.

Some have speculated that the stone’s unusual glow means he cursed it, or that he actually did use his “greatest weapon” against the Mad Titan. And while other theories say Strange was teaching a secret lesson to Iron-Man, and we’re still convinced the Quantum Realm will be vital to undoing the Snappening, a new theory about Doctor Strange’s grand plan has emerged. On this (potentially spoiler-filled) Nerdist News Edition, Dan Casey loops you in on why Strange might have trapped everyone in an old trick of his, and why it could be the key to the Avengers: Endgame.

Reddit user RahulVijh’s brilliant theory says Strange trapped everyone, including Thanos, in a time loop, just like he did with Dormammu, only this time on a much more massive scale, going back years. In Age of Ultron, Bruce Banner actually says, “I’m caught in a time loop. This is where it all went wrong.” That might seem like merely a turn-of-phrase, until you remember that’s the moment they created Vision via the Mind Stone. It’s possible the brilliant scientist subconsciously recognized he was trapped in a time loop at a vital moment in the Avengers’ history.

When Strange looked into the future and saw those 14,000,605 possible outcomes, he might have really been playing out the time loop until the Avengers got to the one scenario where they defeat Thanos. This would explain the stone’s weird glow, because he had activated the time loop scenario by placing a spell on itâ€”the dead man’s curse he warned Ebony Maw about.

And how can the Avengers break out of this cosmic circle that goes back years? With Scott Lang and the Quantum Realm. If he uses a time vortex to escape the Quantum Realm, which he was lost in at the end of Ant-Man and the Wasp, it could also help him break free of the time loop, which Thanos would still be caught in.We’ve also seen set photos that look like the Avengers will revisit the Battle of New York against Loki, and they are wearing weird- (or better yet, strange-) looking bracelets. When Earth’s sorcerer trapped Dormammu in an endless cycle, he had a cosmic green time stone bracelet around his wrist. Could this be another time loop connection? 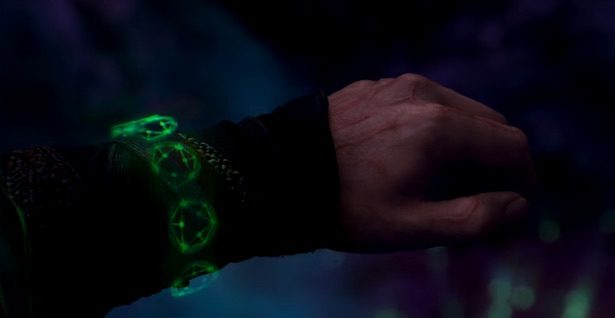 The great thing about this theory is that other theories don’t have to bargain with it, because it combines so many of them. Not to mention it would make the title of the last movie, Infinity War, truly perfect. We always knew that Doctor Strange was smart.

What do you think? Can the Time Stone create a loop that goes back years? How will they break out of it to undo Thanos’ Snapture? Tell us in the comments below.

Additional reporting by Dan Casey and Jesse B. Gill