Imagine a dark time, twenty years ago, when multiplayer gaming online was played over telephone lines (at an average speed of 28.8 kbps), and where displays shined at resolutions of 800×600 pixels. Blizzard decided to celebrate those good old days, when Diablo was first released, as a tribute to the game’s 20th anniversary. Through the Darkening of Tristram events across all their games, the celebration of Diablo is a lovely tribute, but let’s be fair: it only seems appropriate to properly celebrate the original Diablo’s anniversary in the current version of the game.

Looking back, Diablo wasn’t an easy game. You died readily, and you’d drop all your gear and gold (you respawned naked.) Items weren’t account bound so in multiplayer games often times people would try to kill you and steal your gear (and grab an ear with your name on it.) This was a game that had the audacity to put a boss on level 2 that most people really had no chance of defeating unless you leveled-up in subsequent levels and came back to face him again. To this day, I still have nightmares of the Butcher exclaiming, “Ah, fresh meat.” You carried around potions of healing like they were going out of style, and there were no such things as skill trees (you started with one class-specific skill, and they weren’t particularly great or 100% reliable.) There was a stat called Light Radius that simply altered how much of the screen (and therefore how many enemies) you could see.

It was ugly, clunky, and laggy. Despite this, the strange game captured action RPGers. The story, as told through Deckard Cain and through the residents of Tristram, was utterly compelling. In fact, when old Deckard would beckon to you to, “stay awhile and listen,” you often did. The story of The Lord of Terror, and how he came to be in the human vessel that started the franchise, captured the imagination. The multiplayer aspect was also deeply compelling. It wasn’t a proper MMO, but it certainly wasn’t the solo game that was Final Fantasy either. It was something special. 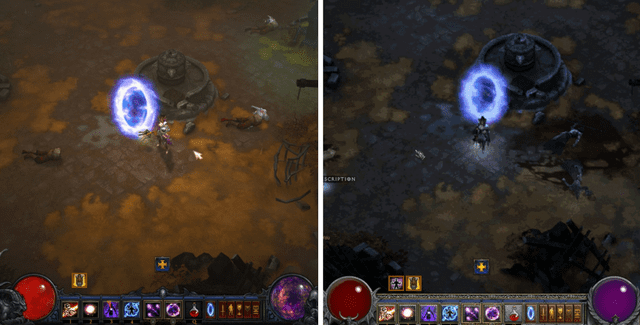 And Blizzard’s Darkening of Tristram event for Diablo III literally gives you a portal back to the world (and game) of the first Diablo, in all its ugly, clunky, laggy, yet somehow delightful glory (though you can skip the lag by running the client in 32bit, if too much authenticity takes away from the experience.) And it is nothing short of a beautiful romp in memory and nostalgia.  Alongside (corpses of) old friends and (very much alive and kicking) foes, old items also make appearances. Griswold’s Edge and Arkine’s Valor, along with copious sets of Godly Full Plate of the Whale and Kings Sword of Haste. Let the matched couplets of the Halls of the Blind tome bring you back. 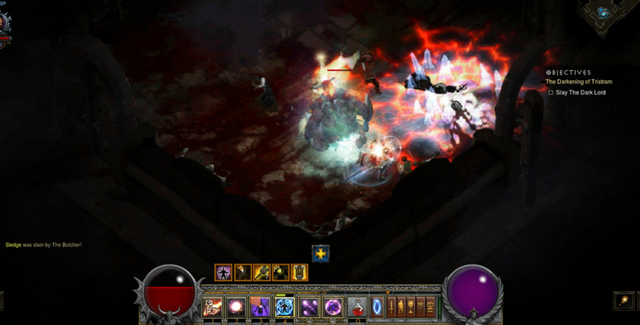 Turn down whatever you typically listen to in the background when you play D3, and up the effects and music volume for a real treat. If you’ve got potions in your stash, move them around and give it a listen. Swing the Butcher’s Cleaver around a few times. Soak in the atmospheric as you walk through the labyrinths. Walk down memory lane in old Tristram and let the ubiquitous strumming bring you back 20 years. If you’ve ever wondered why the theme to Diablo III‘s New Tristram sounded so much like a sad bard with a flair for minor-key flamenco, there’s a reason for that.

It took all of 90 minutes for me and a friend to hack through it with our level 70 characters, getting all the achievements. It was just long enough for us to steep ourselves in the world to enjoy it but not long enough to have one-too-many incidents of death-caused-lag leading to rage-quitting. From looking at our resource globes to seeing the items, going back to playing Diablo in its SVGA glory, or walking away with a fancy gem that can only be put into a socketed helmet,  any fan of Diablo is sure to get swept up by this little event and the memories therein contained. 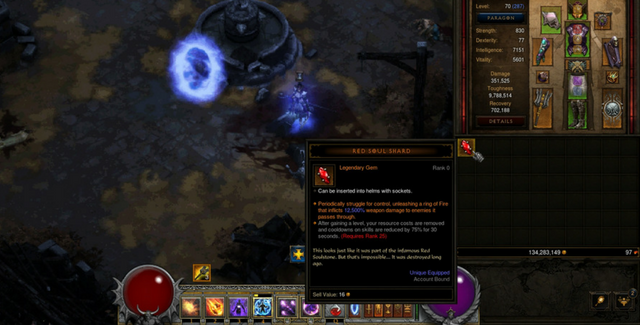 What do you think? Do you have memories of playing the original Diablo? Share them in the comments!