What You Should be Reading: PAPER GIRLS - Nerdist

What You Should be Reading: PAPER GIRLS

Most of us probably already know that Brian K. Vaughan is a master storyteller from his sweeping epic tale of extraterrestrial love and war in Saga. But he also has a new ongoing series from Image Comics out now that you may not have picked up yet, called Paper Girls, currently in its second issue.

This particular comic caught my attention on the shelf at Secret Headquarters, right from the front cover. It’s bright yellow with pink lettering, and features four tough looking gals on bicycles, staring at something we assume is very mysterious. And as soon as I turned the cover and saw Vaughan’s name, along with artist Cliff Chiang (Green Arrow/Black Canary), I suspected that a mysterious adventure was indeed about to occur. 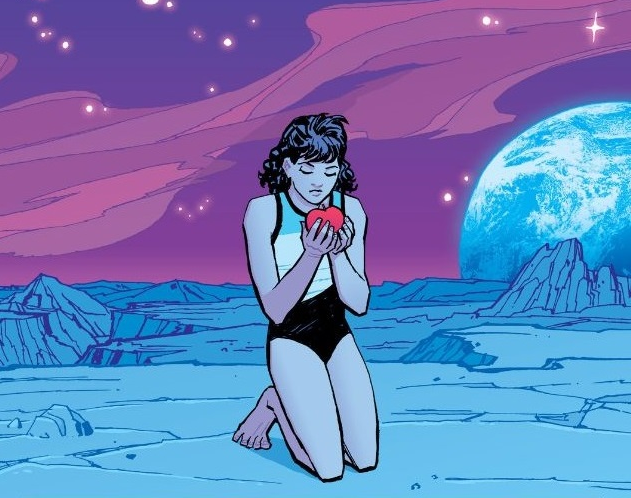 Paper Girls takes us back to 1988, after Halloween, where four newspaper delivery girls stumble upon some very strange things; a massive machine that looks like a space-travel device, weird cyborg ninja’s who speak alien tongue, and Harry Potter-like demon monsters who circle the sky at night. Their parents have seemingly disappeared, along with the rest of the world, and the girls are left to pick up the pieces.

Given that the fantastical element is such a major player, the most impressive part of Paper Girls is the emotion behind each bizarre situation. Mac is the tough ringleader of the group, but we’re also allowed to witness her vulnerability in key scenes where she lets her guard down. Erin thinks she can explain every phenomenon because she listens to the radio and watches television, but deep down, she’s trembling in her boots just like the rest of them. Tiffany and R.J. are equally distinct, and provide some gentle humor in moments of distress, where they have to explain Mac’s hostility to strangers. 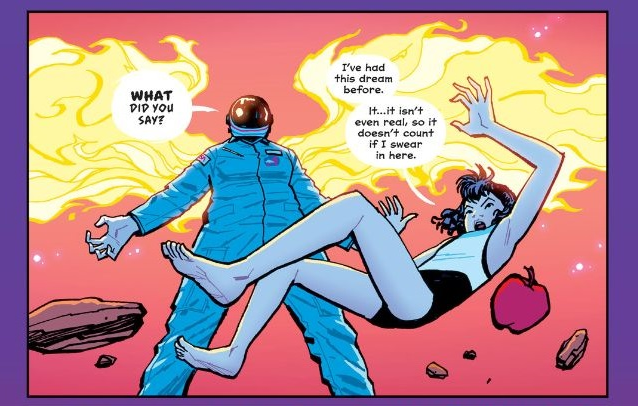 So far, most of the series has taken place at night, where the streets are illuminated only by moonlight. Chiang’s art and Matt Wilson’s colors really come into play here, guiding us through the terror-inducing neighborhood one step at a time.  At times, the sky has breathtaking layers of pink, purple, red and blue, and they compliment the bleak grayish/blue pastel tinge that characterizes the deserted landscape. Another highlight of mine came in the second issue, where the girls glance up to see winged demons in the lightning-streaked strawberry sky. The demons seem to stretch on for miles, right up into the clouds, and the rich colors swirl around them like a vortex.

I’ve heard many people compare Paper Girls to Stand By Me and War of the Worlds, and they’re not bad examples if we’re talking about a portrayal of childhood friendship that really resonates, coupled with mysterious, otherworldly forces. Personally, I’d say Paper Girls is a mash up between Now and Then and a more mature version of The Goonies. In terms of comics, if you’re a fan of The Runaways, Gotham Academy, Southern Cross, Lumberjanes and anything else in that realm of adventure mixed with true friendship, pick up a copy of Paper Girls. Then afterward, let me know what you think on Twitter, or make a comment below.