What Makes CLANK! Tick: Why We Love This Deck-Building Adventure Series of Games

Since Dominion brought deck-building to the forefront of modern game design back in 2008, numerous titles have used the mechanism to power their card games. Players relished the chance to hit just the right combination of cards for huge turns of resources and victory points.

Deck building continues to be a popular choice for designers, laying the foundation for other franchises like Ascension, and in recent years it’s been integral to board game development. From Trains and its Ticket to Ride-meets-Dominion style of play to Tyrants of the Underdark and its use of deck building with area control, board games have evolved alongside the deck-building mechanism.

Released in 2016, Clank! from Renegade Game Studios takes deck building to a new level by throwing you and your friends into a classic dungeon crawl as you try to acquire treasure while avoiding a dragon. With a standalone sequel and several expansions, Clank! has captured the imaginations (and accolades) of gamers everywhere, earning its way into the regular rotations of many a game night.

Let’s take a look at the Clank! series and see what makes each game one of the best deck-building experiences you’ll find on the tabletop.

You and your fellow adventurers delve into a dungeon, battling monsters and trying to acquire treasure while avoiding making the careless noise that results in the eponymous Clank! and threatens to wake up the dragon. 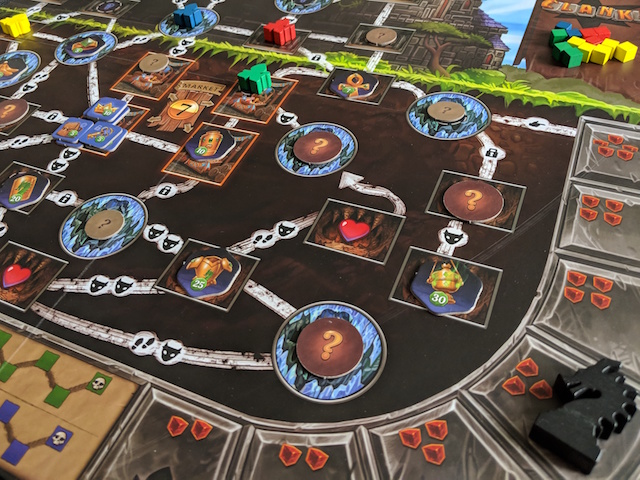 Like Dominion, Clank! uses deck building as its main mechanism, but instead of trying to cull your deck for the most effective combinations, you’re using your cards to move and battle monsters. You’ll start with a basic set of cards that you’ll add to throughout the game. Spend skill points to add valuable companions and items, which will allow you to move and fight more effectively. Once you snare an artifact, play your cards to escape … or push your luck to go deeper into the dungeon for a more valuable prize, hoping that your opponents don’t leave you behind as the dragon wakes up to find its dungeon being looted.

The first expansion to Clank!, Sunken Treasures takes you below the surface of the castle into the liquid depths for more chances to fight monsters, gain treasures, or meet your watery grave. 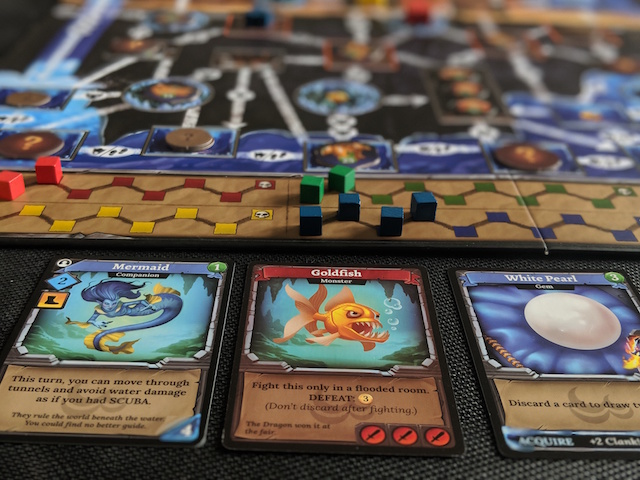 You’ll swim to explore rooms filled with water and you’ll need to come up for air eventually, so hurry back to the surface before you take damage. You may even run across some companions or equipment to help you explore underwater.

The castle’s dungeon and its flooded rooms have been conquered and now the pyramids of the Ancients await you. Be careful, though: curses abound throughout the pyramid and the mummy itself lurks around nearly every corner. 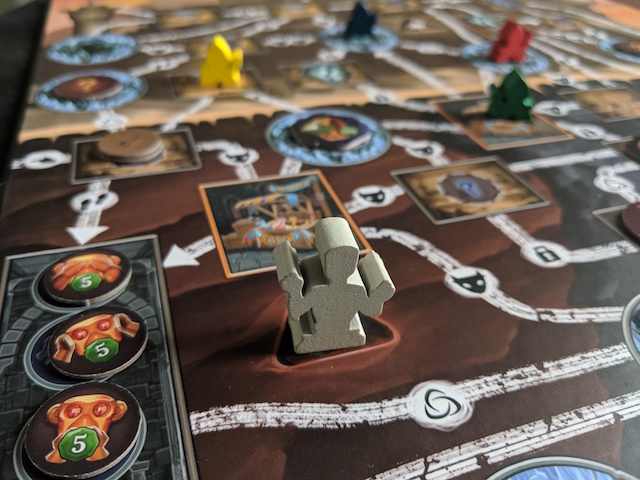 While your group explores inside the tomb of The Mummy’s Curse you’ll deal with the non-stop barrage of curses it brings to your party. Any time you defeat the mummy it’s only temporarily out of your hair: roll the pyramid die and it moves to a new zone, happily mucking up the next poor sap’s plans to plunder.

The latest entry in the Clank! franchise, Expeditions: Gold and Silk, offers players two new boards: the Dwarven Mine and the Spider Queen’s Lair. The first board is the abandoned mine run by the cleverly named Ruined Dwarven Mining Company (Ruin DMC), where you’ll find even more gold buried in its walls before jumping aboard elevators to get away from danger. 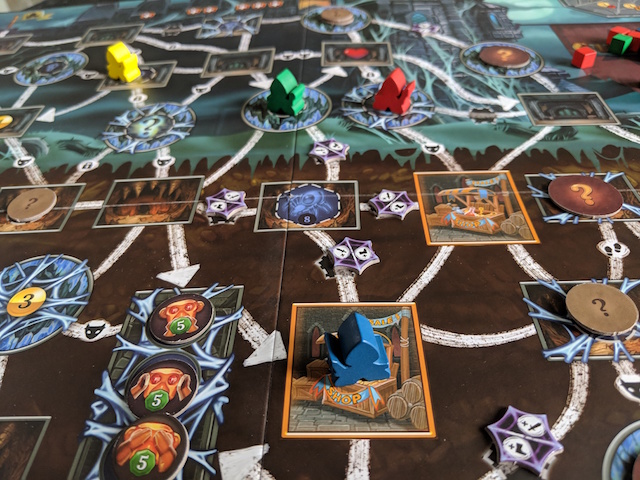 In the Spider Queen’s Lair you’re racing against time to pry your treasures from the webbed rooms in the castle. Is the Spider Queen merely a legend meant to scare you away? Or will you be doomed to spend your dying days promising to never hurt another spider again?

Boldly going where no other Clank! game has gone before, Clank! In! Space! takes place aboard the evil Lord Eradikus’ flagship, the Eradikus Prime. In this standalone sequel, new challenges await those on board, from an interlocking and changeable game board to a plethora of new space monsters. 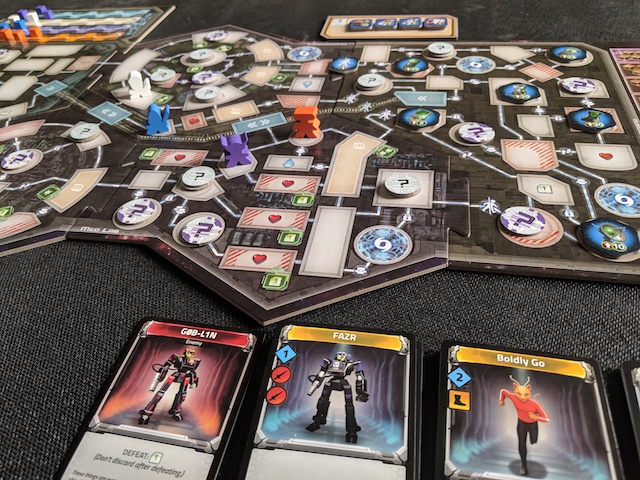 You’ll use hyperlifts and telepads to stealthily maneuver your way around the ship, fighting intergalactic baddies while avoiding bounty hunters. You’ll have access to the space teleport, but you’ll also have to hack into the command module for your chance to steal an artifact. It’s a tougher task than the original Clank!, but there’s also more help in the form of power crystals that pair with certain cards. Use the one-time bonus wisely to plan your escape.

The space adventure continues in Apocalypse! as the evil Lord Eradikus unleashes more forces to deal with the adventurers looting his flagship. 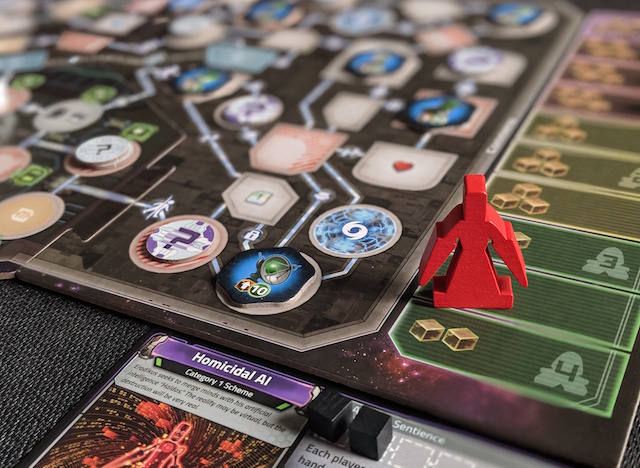 Schemes are introduced into gameplay, from Haldos the Homicidal AI to a Toxigenic Plague, that threaten your entire party. But you can use Eradikus’ very own power cubes to unlock one-time rewards and slow down a Scheme. It’s the most challenging Clank! so far and, if you survive, the most rewarding.

What’s your favorite deckbuilding game? Tell us in the comments below!  Love tabletop games? So do we! Join Becca Scott where she breaks out fantastic board games on  How To Play and  Game the Game every week here on Geek & Sundry!