What Is Marvel's SECRET INVASION? - Nerdist

What Is Marvel’s SECRET INVASION?

One big surprise on Disney’s Investor Day was Marvel’s announcement of a Disney+ Secret Invasion series. This would in fact be the Nick Fury-led show revealed a few months back to be in development. The title refers to a seismic event in the Marvel universe, which took place in the eight-part Secret Invasion event mini-series in 2008. For MCU fans who are less familiar with the comics, here’s a breakdown. Just what was the secret invasion? Who exactly were the aliens that did all that invading? And how did it all worked out in the end? Secret Invasion was the brainchild of writer Brian Michael Bendis. After revitalizing Earth’s Mightiest Heroes with his New Avengers run starting in 2005, Bendis planted the seeds for what would be one of his greatest epics. Bendis began his long run at the end of the original Avengers series, with the storyline Avengers Disassembled. This story saw the legendary team crumble from within. It was the end of an era that had lasted over 400 issues.

But soon, Captain America and Iron Man would put together a new Avengers team, realizing the world couldn’t go unprotected. For the first time, long standing Marvel heroes like Spider-Man and Wolverine would join the ranks. Also enlisted was one hero who hadn’t been heard from in a long time: Jessica Drew, the original Spider-Woman. Fans had not seen her in costume in decades, but were nevertheless excited for her return. However, this return was not as it seemed. Before we get to that, a brief explainer on a particular alien race is in order.

A Brief History of the Skrulls 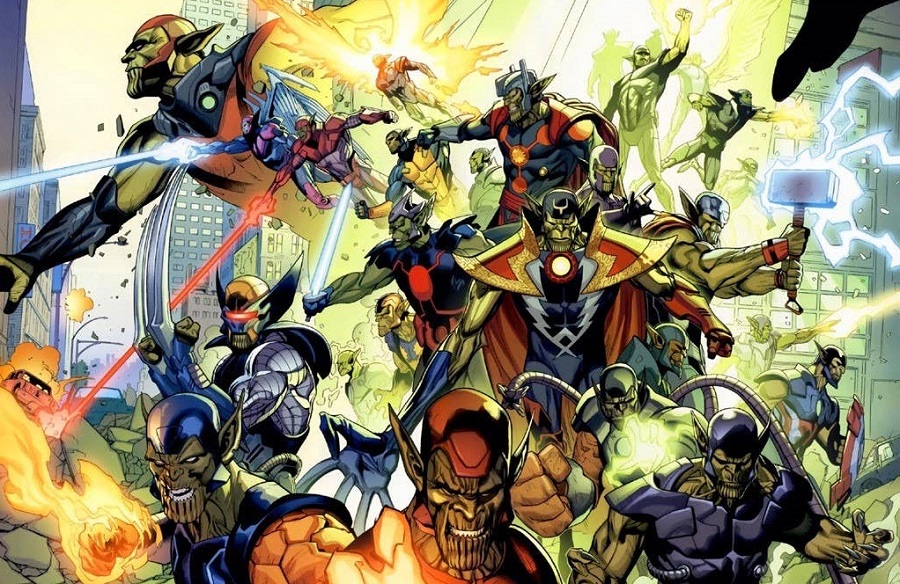 The menacing Skrulls have been a thorn in the side of Marvel’s heroes since 1962’s Fantastic Four #2. The green, reptilian aliens were shapeshifters, and could assume the form of anyone. They made life miserable for Earth’s heroes, culminating in the epic Kree-Skrull war in the pages of Avengers. Even after that, they continued to create havoc, notably kidnapping the Thing’s girlfriend Alicia Masters and replacing her with a Skrull agent. She married the Human Torch, creating a deep rift among the team. During this time, the planet eater Galactus destroyed the Skrull homeworld, leaving them a nomadic race. But they never lost sight of their plans for Earth. 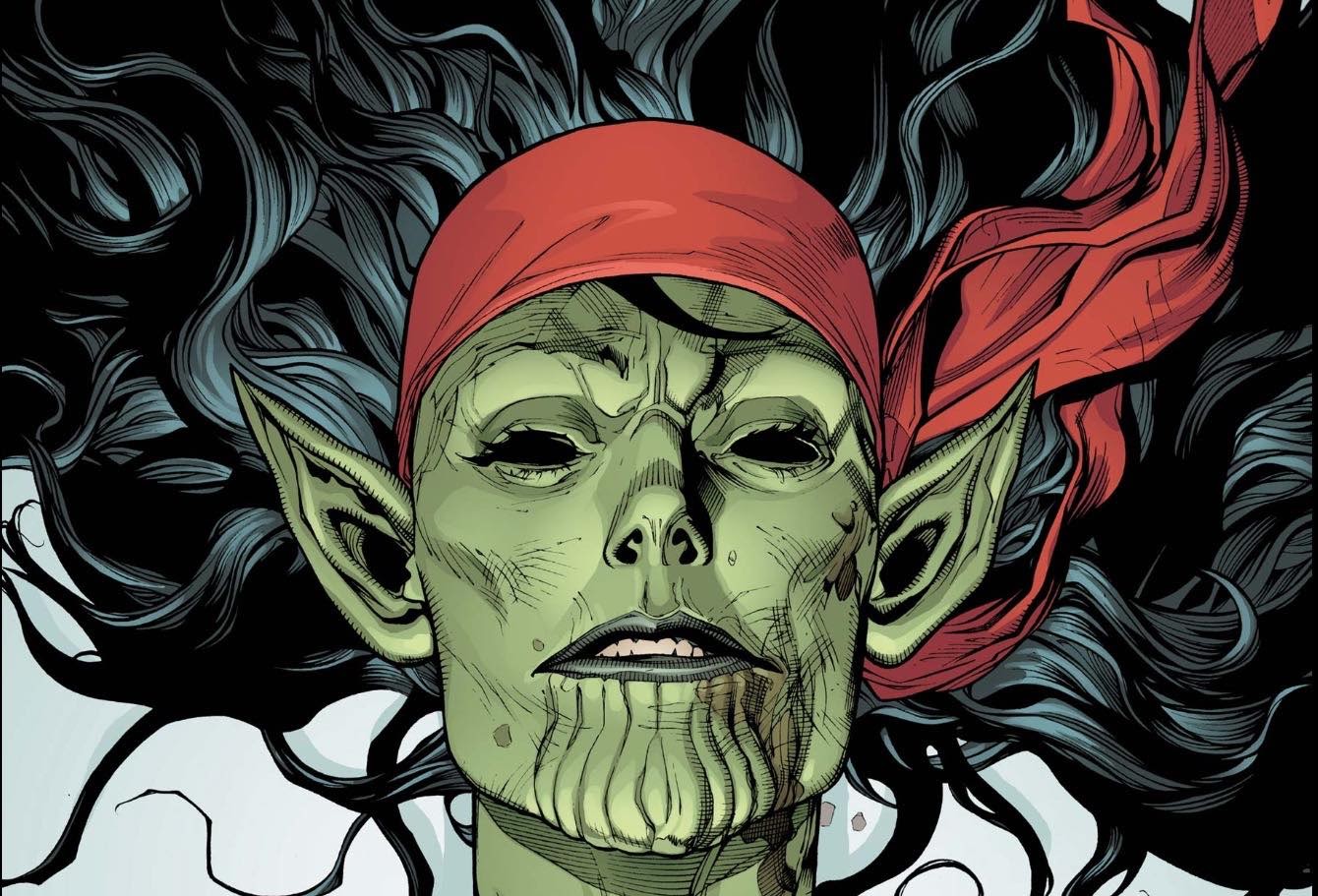 The first signs of a Skrull infiltration came in 2006, when an Avenger named Echo killed the assassin Elektra. Upon her death, Elektra transformed back to her natural Skrull state. This led to shockwaves throughout the superhero community. Who else had been replaced? This was especially shocking to the Illuminati, the secret cabal of heroes formed after the Kree-Skrull war. These included Iron Man, the Inhuman King Black Bolt, Black Panther, Professor Charles Xavier, Doctor Strange, Namor the Sub-Mariner, and the Fantastic Four’s Reed Richards. Black Bolt then revealed himself to be a Skrull and attacked the rest of the Illuminati. 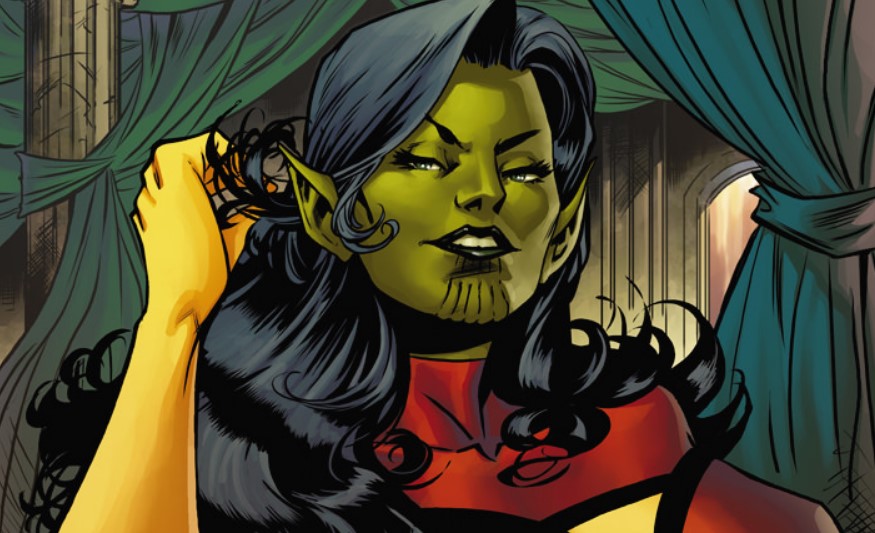 Suddenly, ever hero in the Marvel universe was a suspect. Especially heroes who had died and suddenly come back to life in previous years. Captain Mar-Vell had passed away from cancer years before and had only recently returned. Turns out, he too was a Skrull in disguise. Others replaced were Iron Man’s faithful butler Jarvis, the X-Man Longshot, and Brother Voodo. The biggest blow came when Spider-Woman was discovered to be not only a Skrull, but the Skrull’s ruler Veranke.

Readers learned that the alien Princess Veranke was originally exiled by the Skrull Emperor Dorrek. But after Galactus destroyed the Skrull homewold, Veranke became the new Empress. She was behind the invasion of Earth, gaining knowledge of Earth’s superhumans while posing as the heroic Spider-Woman. The real Jessica Drew was held captive when Veranke assumed her place. 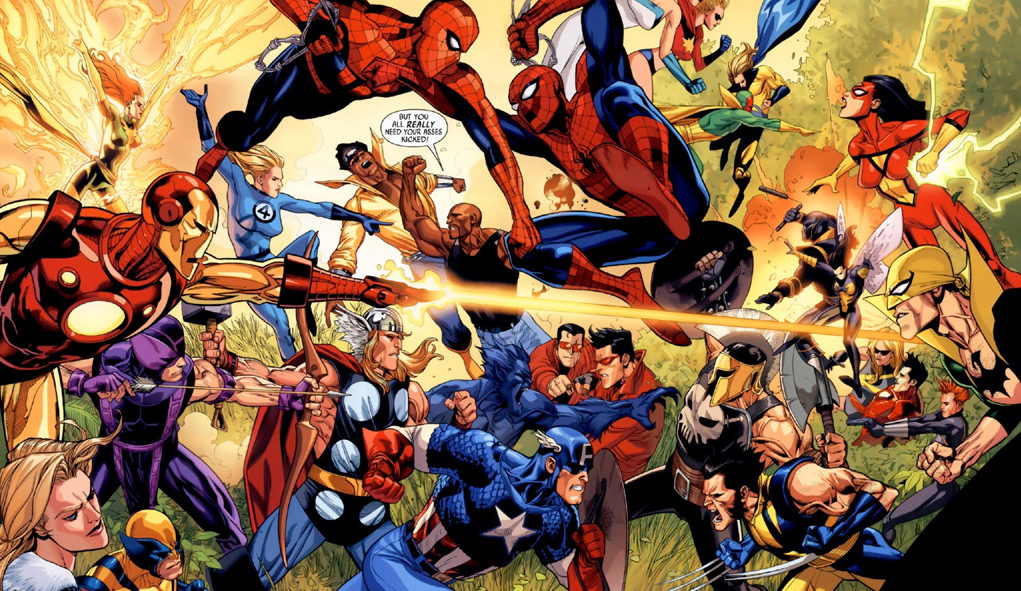 Once revealed, the Skrulls infiltrated and disable the S.H.I.E.L.D. Helicarrier, along with their orbiting base The Peak. Skrulls instigated a massive breakout on the Raft, a supervillain high security prison. The series’ climax saw a huge battle between Nick Fury’s collection of heroes and the Skrull Armada. Naturally, the heroes ultimately won. But it wouldn’t be one of the good guys who dealt the Skrull their killing blow, but former Green Goblin Norman Osborn. 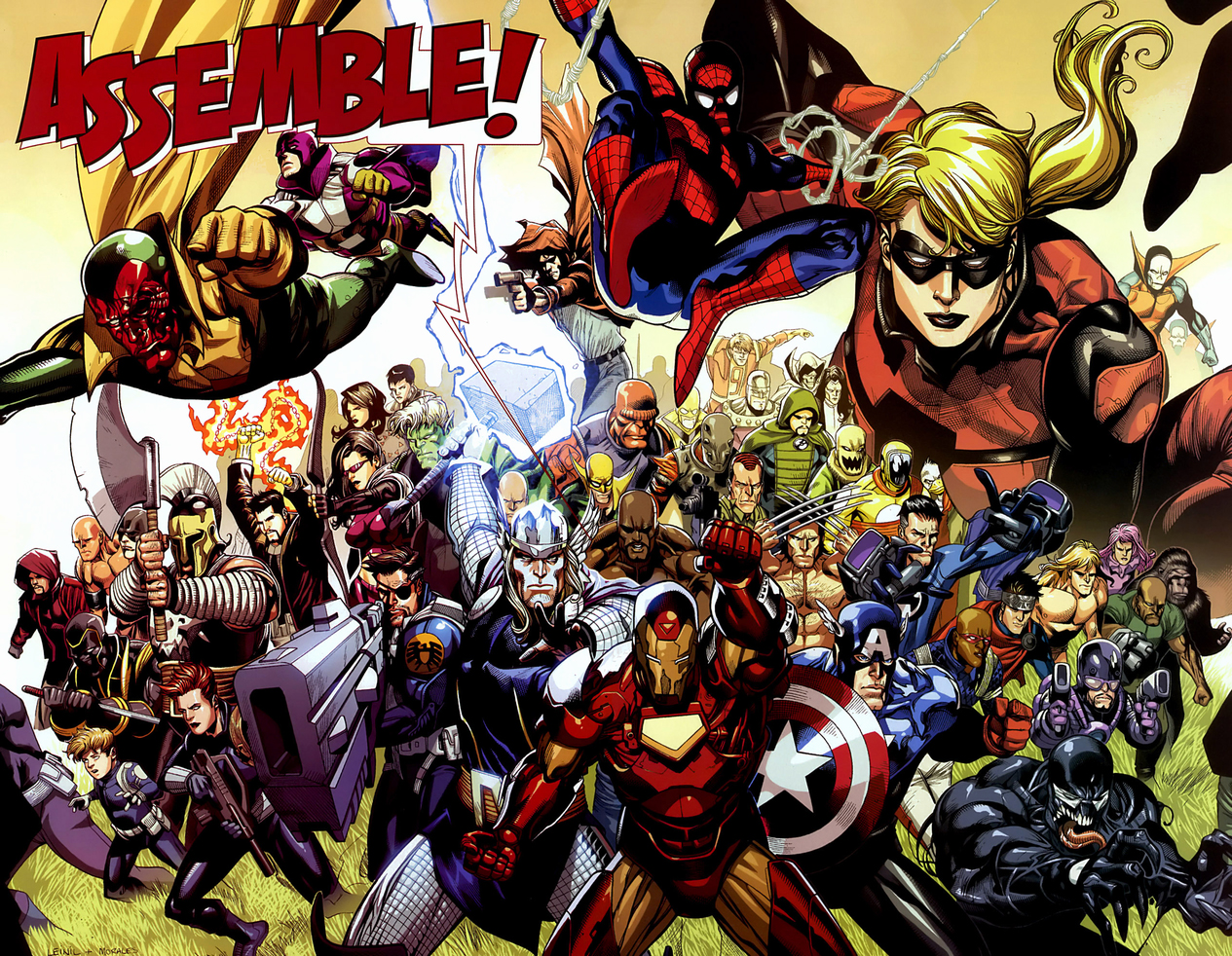 Those replaced by Skrulls came home, some after years away. But the failure of the Avengers and the other heroes to stop this massive infiltration did not go unnoticed by those in charge. The President of the United States dissolved S.H.I.E.L.D. and replaced it with a new organization called H.A.M.M.E.R. (Don’t ask what it stands for; that’s classified.) Norman Osborn took charge of H.A.M.M.E.R., kicking off a period in Marvel history known as the Dark Reign. For the next several years, villains ruled the day.

Who Do You Trust? 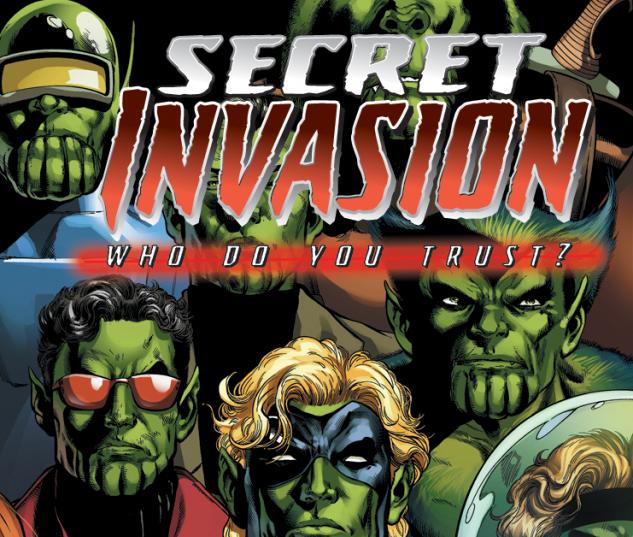 Of course, the MCU is very different than the comic book universe. There are no X-Men or Fantastic Four… yet. There is also no Illuminati. The only Kree-Skrull war we know of took place in the past during the events of Captain Marvel. Also, the biggest change is that in the MCU, some Skrulls are good guys, like Captain Marvel’s Talos. Ben Mendelsohn will reprise his Talos role for Secret Invasion. So it’s possible we have a story where friendly Skrulls have been placed in important positions to counteract the malicious ones. 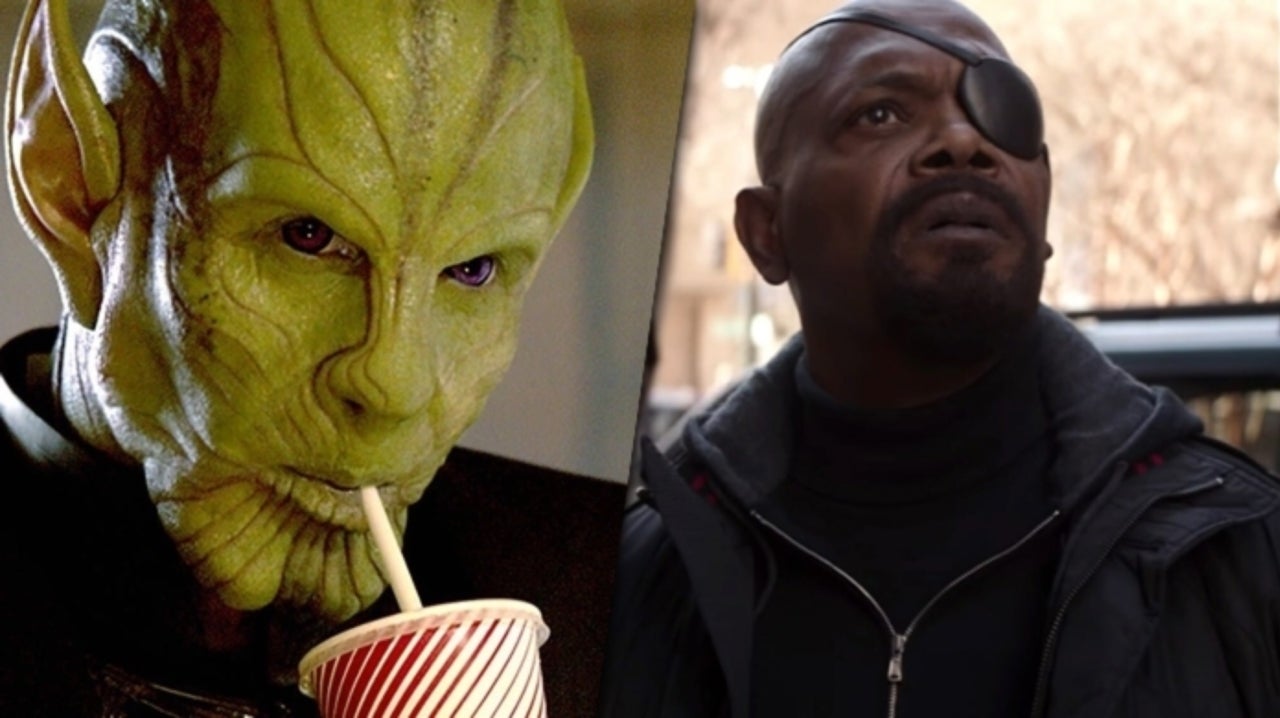 Top candidates for bad guy Skrulls in the MCU are bureaucrats like Black Panther’s CIA agent Everett Ross, or CIA operative Sharon Carter. Maybe the most obvious is military commander Thunderbolt Ross, who has been making life miserable for superhumans since The Incredible Hulk. As for good guy Skrulls, we know Talos “replaces” Nick Fury on Earth in Spider-Man: Far from Home, so we doubt he’s alone. Deeming Black Widow a Skrull would be an easy way to undo her death in Endgame, but we doubt they want to cheapen her sacrifice in that film.

One thing is certain. Although the MCU’s Secret Invasion is sure to be different than the comic book version, we should expect massive changes to the universe as a result.