What Does It Take to Be the World’s Greatest Gamemaster? - Nerdist

What Does It Take to Be the World’s Greatest Gamemaster?

Every summer, the greatest gamemasters assemble. By car or by plane or by pegasus, these superstars of the imagination voyage to a single room in Indianapolis, Indiana to undergo a scorching trial. Who is the greatest gamemaster in the world? Over a full day of grueling and sweaty dice-rolling, with swords chipped down to butter knives and the bodies of orcs and owlbears piled high as the walls of Minas Tirith, the weak and unworthy will be burned away, leaving naught but GMs of iron. This, is the Iron GM Tournament, and every year it searches out the greatest gamemaster alive.

Iron GM is a competitive gamemastering event in which dozens of GMs from across the globe compete against one another to determine who will be the Iron GM champion of the world. In 2015, the man left standing after the fracas was Daniel Clark. Geek & Sundry had a chat with the reigning Iron GM of 2015 about how to prep an amazing game and how to get into role-playing.

This interview has been edited for brevity and clarity.

What does the GM need to do to make a good role-playing game session?

You need to make sure everybody has fun. I think that’s the only thing you need. What I think guarantees fun is forward motion in the story and character development, and people get to do something cool and feel investment.

I really view being a GM as part of the service industry. It’s not about me it’s about the players. It’s about them having fun and changing the world, if they want to. You have to constantly pay attention to what’s happening at the table, don’t be afraid to talk to people, and surf the ebbs and flows. It sounds new age, but it’s really paying a lot of attention to what everybody’s feeling. They have to be able to do cool stuff without stomping on other people. It’s a high-wire act.

If a good game session is about making sure everyone is having a good time, how do you deal with failure within the game?

Everybody has their own threshold for the masochism inherent in role-playing games. If it’s all just easy all the time, it’s not fun. And if it’s impossible it’s not fun either, so I just try to balance those things. Some people love punishment and just don’t care, if a character dies. Boom! They’ll make a new character. Some people are super-conservative about it and if their character dies, it will upset them.

You have to be ready to react to whatever the situation at the table is. And when players fail at stuff, I don’t like to do it like the Fate system where there are degrees of success, because that’s just failure with a good PR agent. If you fail at something, you suffer the consequences because that way you’re still affecting the world.

Right now it’s Pathfinder by far because it got me back into gaming. [Pathfinder is a role-playing game based on the 3rd edition of Dungeons & Dragons. –Editor] We started playing, and it just did so many things right and hit so many sweet spots for me. Now it’s my favorite because the system is so flexible.

If you want to do a thing, you roll a D20. The mechanics can be boiled down to one die, one roll. We, as collaborative storytellers, will decide how tough that thing will be for you, and you don’t have to fart around with anything else if you don’t want to.

I think one of the things Paizo is doing very, very well is being much more inclusive of people of color, of people who are LGBTQ, women, people of different ages. They are making a concerted effort to put different faces on role-playing and that can only be good for the hobby. 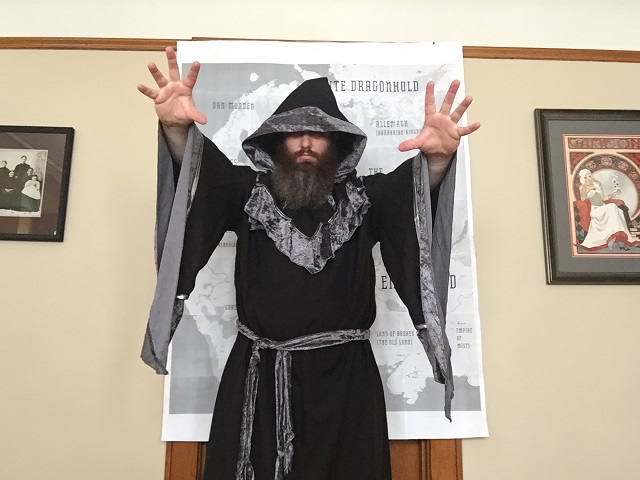 Do you have any favorite published scenarios?

I tend to do all of my own stuff really. I like having a toolset and maybe a basic setting and that’s it. I don’t spend a lot of time with published scenarios. My current group spent four years in the world behind me which is one of my home brew worlds. [Dan gestures at the large map covering half the wall behind him.] I had six separate games running simultaneously and concurrently in that world, and they were all affecting each other. There were multiple times when one party would meet with some NPC and he would get killed, and the other party was supposed to meet that NPC and they’d get there and say, “Whaddaya mean he’s dead?” Great times.

And it helped me to be able to have control over the world. I think the reason I do that is because to deliver the gaming experience that I value, I need a level of control over the world that most published scenarios can’t give me, or that I don’t feel comfortable taking. I wouldn’t feel comfortable doing to Golarion or Ravenloft or whatever what I do to this poor place. I mean I’ve already blown it up twice… Recently a character incorrectly used an artifact and summoned the ocean, destroying everything for hundreds and hundreds of miles, and I’m not sure I’d be comfortable doing that with someone else’s published scenario. Mostly I use my own stuff ‘cause I wouldn’t be comfortable doing that to someone else’s world.

What is the best way for a person to get into role-playing games?

I’ve experienced the former myself. A friend of mine wanted his kids to try gaming and we did it and once they realized the level of freedom they had in there they went bananas. Another time, a guy brought his teenage sons to my “Christmas with Cthulhu” game and they were so excited they were literally standing up and hopping from foot to foot during the game.

You have to do some sessions with training wheels, but a lot of the time you don’t have a choice about who you game with, especially when you’re a kid. It’s your friends, you know? And it certainly was for me. The guys I first played with- We were horrible. We were playing red box D&D [An iconic 1983 D&D boxed set. –Editor] and we had no idea how treasure worked. The only reason the game worked was because we were all equally clueless. There’s the famous cover of the red box, right? Of the barbarian swinging his sword and there’s red dragon coming and they’re standing on a field of gold coins three feet deep, and they’re wading through the coins and you can’t see the lower half of the dragon because it was obscured by treasure. Well, I thought that was how you put treasure in a dungeon. I would have notes for rooms in dungeons saying things like, “Two feet deep, gold coins.” Just the most idiotic stuff, but I was ten.