WELCOME TO... Is A Retro-Themed Roll-And-Write Game With No Dice - Nerdist

Love tabletop games? So do we! Join Becca Scott as she breaks out fantastic board games on  How To Play and  Game the Game every week here on Geek & Sundry!

There’s never been a better time to be a fan of roll-and-write games. The mechanism made popular by Yahtzee has seen a resurgence in recent years and the roll-and-write Ganz schön clever was recently nominated for a Kennerspiel des Jahres, one of the gaming industry’s prestigious awards.

Welcome To … is the latest of this new crop of roll-and-write games and it uses exactly zero dice. You and your opponents are architects trying to create the best neighborhood streets in the city. You’ll add pools and parks to your neighborhoods while working to complete local government goals. Temporary workers will help you and you’ll work with real estate agents to increase the value of your properties. The player with the most points is deemed the best architect and wins the game.

Each architect gets their own score sheet, which features three suburban streets in 1950s America. Instead of rolling dice, you’ll turn over three construction cards (numbered one through 15) every round and write the number into one of your houses. You may write down the number on any house on any street, but they must be in ascending order; you don’t want to confuse your friendly neighborhood mail person!

Depending on the cards that are available, you’ll have the option to perform an additional action for additional points. You’ll want to keep your residents happy, for example, by using the Landscaper to build a park on their street or having the Pool Manufacturer build pools in homes that are prepped for some summertime splashery. 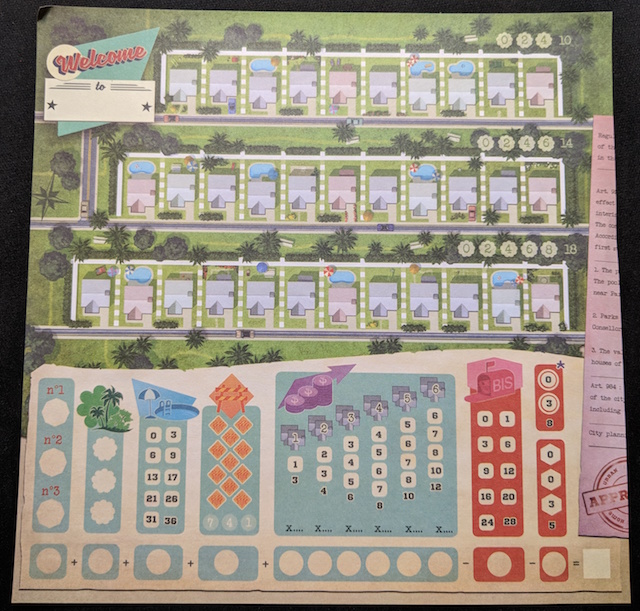 Of course, as your streets fill up, it may be tougher to find spots for your numbers. Thankfully, the Temp Agency can increase or decrease numbers by up to two points. Have no space for a 10 on your street? Use a Temp Agency to increase it to 11 or 12.

You can also duplicate a house’s number with the “bis” action, thus giving you a way to fill in those pesky blank spots on your streets. Welcome To … was originally a French game and its roots are apparent here; “bis” is used in France to denote a house with the same address (“12 bis”).

Finally, you’ll want to create housing estates by using the Surveyor to build fences around groups of homes. The Real Estate Agent can then increase the value of your estates.

All of these actions are done simply by marking off the appropriate section of your score sheet. Unlike the classic roll-and-write Yahtzee, there’s no downtime as you wait for someone to finish their turn. Turns are taken simultaneously in Welcome To … and players are allowed to use the same numbers and/or actions.

There are also City Plans, which are earned by meeting certain conditions, such as having three separate one-house estates and a four-house estate in your neighborhood. Players race to be the first to complete a City Plan, thus earning more points than their opponents. The game ends immediately when an architect completes three City Plans, is unable to fill in a number for a third time, or fills in all of their houses. 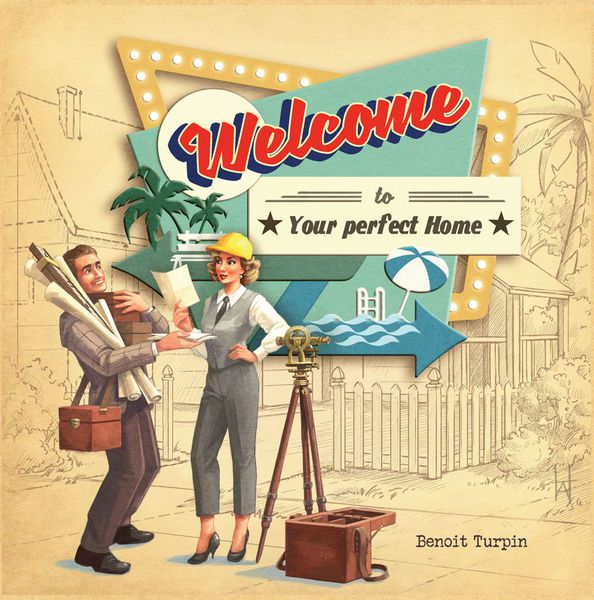 Welcome To … is the rare roll-and-write game that actually has a theme, with a ’50s American suburb shaping up on your score sheet. Best of all, there are several paths to victory in this city-building game. Do you focus on building pools and parks or race to complete City Plans? Or do you build plenty of housing estates and wait for the Real Estate Agent to increase the value of those estates? There are tense decisions on nearly every turn and with players performing their actions simultaneously, there’s never a dull moment in this instant classic of the roll-and-write genre.