The Webcomics That Are Changing The World - Nerdist

The Webcomics That Are Changing The World

When How to Get Away with Murder actress Viola Davis stepped on stage to accept her Emmy award, the veteran actress eloquently addressed a major reason why she was the first Black woman to win the Outstanding Lead Actress in a Drama Series award:

“The only thing that separates women of color from anyone is opportunity.”

Ms. Davis’ comments were targeted toward women of color specifically, but her statement has proven itself to be true when it comes to diversity in mainstream comics. There has been a reoccurring discussion about the lack of diverse main characters in comics by major publications. With the success of movies about Iron Man and Captain America, comics are more popular now than ever, but existing and new non-White characters were not being brought to the forefront until webcomics took over the world.

Many comic creators saw the mainstream comic world turning a blind eye to a huge fan base and decided to create their own opportunities via webcomics. Talented artists and writers use the low-cost, low-barrier entry method to supply people with stories that resonate with their experiences as people of color. Comic lovers who are tired of the lack of fair representation from traditional publishers gravitate toward webcomics for simple reasons. One, the comics meet them in the virtual world where they reside. Two, the characters and storylines feature people who look like them.

With the power of social media, webcomics have caught the attention of major media outlets as their followers spread the word about their stories. The massive collection of webcomics cannot be compiled into an exhaustive list, but the following are a sample of series that are causing a shift toward diversity in the overall comic world: 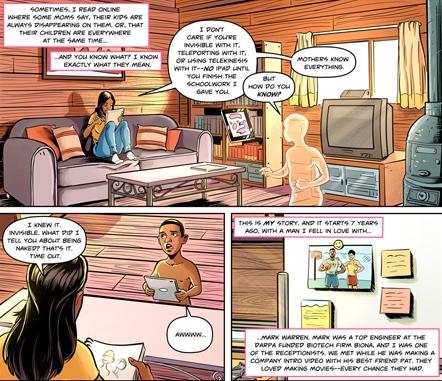 Raising Dion is a brand-new webcomic by writer/director Dennis Liu with an interesting perspective on the life of a superhero. Instead of his story being told from the first-person perspective of the person with powers, readers experience the story through the eyes of a single Black mother. Nicole, a widower, describes life with her 7 year old son, Dion, who has a host of powers including telekinesis and invisibility. In order to keep her life in order and keep an eye on her young son, she films every second of his life. Her already strange world becomes increasingly stranger when she discovers unknown men studying her every move and Dion’s sharpening powers.

The unique premise of the comic has caused it to become an internet sensation. Raising Dion has been featured on a host of websites including The Guardian, Fusion, and Huffington Post and has been widely praised for having black main characters and an accurate portrayal of single motherhood. The media attention has led to an outpouring of support for the creator as well as discussions on innovative ways to position new comic series.

The Life and Times of Abigail Waller

Screenplay writer Kevin Sorrell tried to submit his scripts to Hollywood agencies for years. After relentless rejections, he decided to branch out on his own and pursue a clever idea. Abigail Waller started as an online web series that was meant to have an “Ally McBeal” tone with a cast filled with people of color. However, after only two episodes, the project became dormant until Sorrell decided to throw caution to the wind and bring the idea back as a webcomic in April 2015. Since then, the bi-weekly series has been featured on Black Girl Nerds and OurImage Film & Arts, and applauded by fans for its offbeat humor.

Kevin created an opportunity for himself when doors weren’t opening for him and now he is prepping to independently release a full print comic series called Lupus Moon based on the love he has received from The Life and Times of Abigail Waller.


As more readers gravitate toward web-based comics, the “Big Two” are finally beginning to make steps towards change. News reports recently revealed that Marvel has tapped social/cultural writer Ta-Nehisi Coates and artist Brian Stelfreeze to develop a 2016 comic series around Black Panther (who has a major movie dropping in 2018). Their involvement is a sign that Marvel is beginning to realize the need for diverse creators as well as characters.

DC Comics also dropped a major bomb earlier this year when they announced the return of the Milestone Media and the return of characters of color from the 90s, including Static Shock, Xombi, and Hardware. DC Entertainment co-publisher Jim Lee spoke briefly on the decision and what they hope it accomplishes:

“We couldn’t be more proud and excited about the opportunity to bring the Dakota universe back to DC. This is a huge step forward for us in bringing readers a more diversified lineup as part of the New DC Universe, and we’re anxiously looking forward to telling new stories that are socially and culturally impactful and representative of the world in which we live.”

These fairly recent developments by Marvel and DC proves the companies are paying attention to social media demands and the overall popularity of multicultural webcomics. More now than ever, fans are able to call major comic publishers out when they drop the ball and offer suggestions on ways to improve current comics. And, if they don’t see the changes they demand, fans have the option to find online creators who are passionate about portraying the world through an accurate lens. Patreon, Kickstarter, and other fundraising methods are helping many webcomic creators make a living off of their art and fans are beginning to also speak with their wallets by supporting them. Online comics are indeed effecting positive change in the overall comic world and will continue to influence future trends in character development and diversity both in comics and behind the scenes.