Why We Played Gloomhaven For 30 Hours And Still Want More

If games can achieve the status of art, then as Indiana said, Gloomhaven belongs in a museum. This is a masterful design that offers an altogether new experience. It presents a horizon that stretches beyond fathomable scope. It rides upon the wind of innovation and it pulls you down into its depths like a fever dream you never want to forget.

Hype and excitement come naturally to Gloomhaven. The box itself is bristling with content and you feel like you’ve just mugged old St. Nick. The physical presence and immensity of the product have helped propel this game nearly as much as the mechanisms. This would be more of a problem if the game didn’t deserve the excitement.

I discussed the broad touches of the design in my overview article, but now it’s time to dig a little deeper. I came, I saw, and I’m still craving more.

Gloomhaven is all about the journey and its arc. The narrative itself has many ups and downs—including a somewhat weak start–but what’s remarkable is that the experience of assimilating its mechanisms follows a very deliberate path. The core card system is initially a struggle. By forcing the tempo onto the players and presenting it as an obstacle that must be beaten into submission, the design offers a compelling challenge but it also initially feels punitive. The first few sessions will feel as though you are fighting the current. It’s as if the game itself is restricting your prowess and desires you hold back. Figuring out that key component of timing can be rough. Toss in a wild Inox or Stone Golem who wants to crush your windpipe and that conflict of internal and external pressure can be overwhelming.

But like any difficult task, it gets easier. You progress to the point where that tempo and the beating clock of card management is no longer an enemy. You pull off massive combos and unlock damage potential that seemed preposterous only a few sessions prior. The opaque nature of that phantom timer yields to satisfaction and empowerment. It’s remarkable and fantastic. 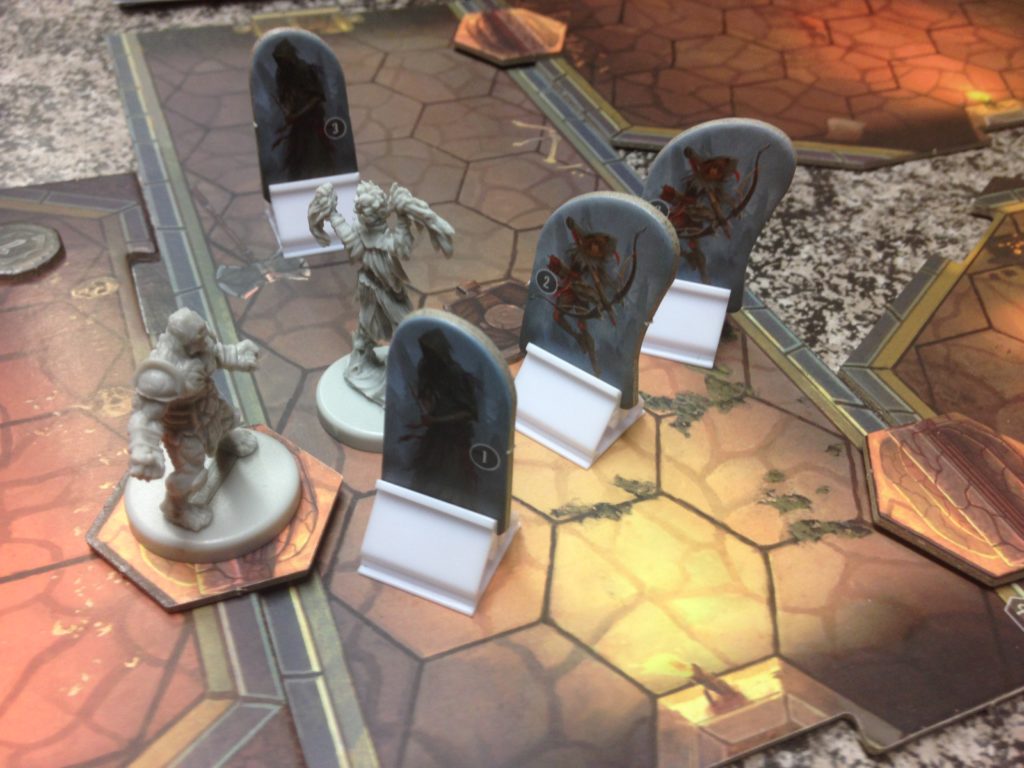 The interwoven systems of heroic card play, enemy AI decks, and attack modifier cards all form a marvelous ecosystem. When everything is humming along the game presents interesting tactical puzzles and fulfilling outcomes. There are times, however, when the processes are stretched to their limit. When playing the odd scenario featuring multiple enemies the system begins to bend and can feel as though it’s going to break. You have a handful of envelopes tracking multiple types of enemies’ health and you’re constantly reshuffling the individual creature activation decks as well as the shared attack modifier cards. It becomes a chore as the fun seeps out of the environment and it feels as though you’re engaged in a tactical accounting simulation. The game inherently lacks the speed of your typical dungeon crawler and large battles emphasize this weakness. Luckily they’re pretty rare.

That aspect of uncomfortably abutting its boundaries persists in the legacy elements of the game. Once you progress far enough along you will reach a point where the world map is full of stickers. Each marks a location where you may travel and engage in a scenario. Some will have their tiny check-boxes marked, showing that you’ve completed them. Many won’t.

When it comes time to scan the map and decide upon a course of action, your options may be obfuscated and the effort involved larger than desired. Some of the locations you won’t be able to tackle because of pre-requisites you haven’t obtained or because you’ve chosen a path in the narrative that has locked certain options out of your grasp. Unless you take copious notes the only way to figure this out is by looking up the specific scenarios in the large book. Some of the stickers in the city of Gloomhaven also blend in with the artwork unfortunately and further muddy things.

The pains and limitations of the game are overshadowed, not only by that enormous box, but also by the sheer comfort imparted. While challenge is a key component of the boots on the ground play, this release boasts one of the most impressive positive feedback loops I’ve seen. A key philosophy consists of the paths presented continually resulting in positive reinforcement. Gloomhaven knows what it’s doing and it makes you feel warm and fuzzy. 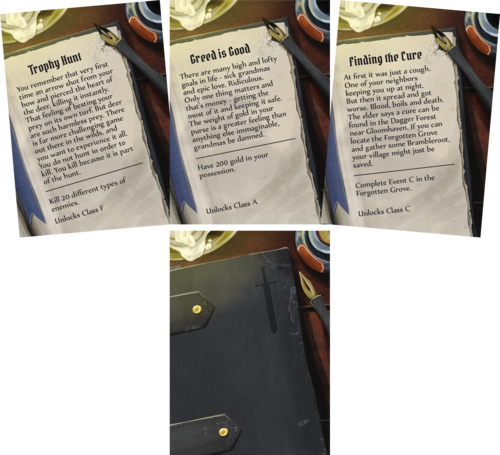 Personal goals influence the journey and provide the destination

This is seen in the culmination of story arcs opening up new whole sections of the world. Success yields physically manipulating the board by placing stickers, an activity that once delighted all of us as small children. You’re given clear character and battles goals for incremental achievement. When your character accomplishes their personal quest and retires, you even unlock a new character envelope. Besides the obvious benefit of accessing new content, this provides a generational feel to play that offers weight to the story. That narrative path is grounded and emphasized by ret

All of this in concert is seriously powerful stuff. It feels as though the act of play is digging through that massive treasure chest box and unearthing fortune and glory. This synergy of narrative character action to physical thematic behavior is magnificent. I want to compare that massive cardboard lid to a can of Pringles, but that would only minimize the achievement. Ultimately it comes down to the fact that this may not be a perfect game, but the experience is something that will grow and evolve with you over time. The notion that the content may outlast your commitment to this existence is frankly absurd, but Gloomhaven revels in the absurd.

Have you played Gloomhaven? Do you enjoy legacy games? Let us know in the comments below!