Return to ancient Japan, when the Chinese emperor gifted to his Japanese counterpart a giant panda bear. In Takenoko, players cared for this precious gift by cultivating land, irrigating it, and growing bamboo for the ever-hungry panda. We recently played it on Game the Game, in its adorable glory:

The Chibis expansion maintains the elegant play of the original, but this time its mating season. Along with new land tiles and objective cards, Miss Panda is now an integral part of the game, which means only one thing: panda babies!

Like the original Takenoko, the Chibis expansion puts you in charge of taking care of Panda, watching him as he happily makes his way around the royal garden, eating bamboo. You’ll still need to irrigate the garden and move the farmer to grow the bamboo so that Panda doesn’t go hungry. And points are scored just like in Takenoko, by completing Panda objectives, gardener objectives, or plots objectives.

Best of all, Miss Panda adds a new (and even cuter) element. After one of the new land tiles with the Miss Panda icon is placed, she’ll show up there.

Just like her male counterpart Miss Panda can be moved in a straight line and if she ends up on a space with Panda, then cue the music because it’s baby-panda-making time. Simply discard bamboo to receive the corresponding baby panda token and gain an immediate bonus. Each baby panda token also worth two points each at the end. 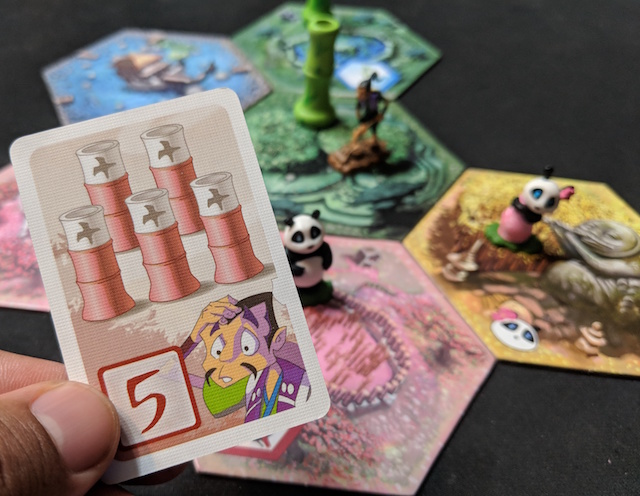 What’s great about Chibis is that it’s an expansion that keeps the game fresh without bogging down the original game’s smooth game play.

Do you let move Panda to eat bamboo to fulfill an objective? Or do you move Miss Panda instead, thus giving you a baby for fewer points but an immediate bonus? And do you use your bonus ability to swap out an objective? Unlike the base game, you’re not stuck with unreachable objectives; by having a baby you can use its ability to discard an objective and select a new one.

It’s these types of decisions that adds depth and replayability without a bunch of unnecessary or over-complicated mechanisms.

The new objectives and tiles are easy to understand and Miss Panda is a simple addition since she moves in the same manner as Panda. Veteran players will easily incorporate the expansion into Takenoko and new players shouldn’t hesitate to play with it, either.

Doubling the amount of panda miniatures and interesting decisions without changing the basic gameplay makes Chibis a no-brainer, must-have expansion for a classic gateway game. And it goes to show you that there can never be too many cute pandas in a board game.

What board game do you think is the cutest? Tell us in the comments below!