Mankind delights in mystery. The unknown must be solved at all costs. This is why Clue has won such mainstream appeal. It’s also why Sherlock Holmes: Consulting Detective has garnered such acclaim. Watson & Holmes is now here to get in on the cigar and tweed action, bridging the gap between those former two settled titles.

No matter which way you slice it, this really is a merging of those two games. It’s a competitive design where each player moves around a layout of location cards to glean hints and details necessary to solving a case. If the story framing up the mystery is the brain then the competitive race to a solution is the heart. A rapidly thumping animated one at that.

Like the Consulting Detective series, this is not a replayable game. Once you’ve participated in a case and heard the solution you will not be able to return until you’re suffering from dementia or binge just a little too hard the night before. The pain of applying a lifespan to your cardboard is alleviated by the inclusion of 12 scenarios and clatter of expansions coming down the thoroughfare.

Each scenario consists of an introductory story and a set of questions that will burn a hole in your head. Cards are laid out on the table, each representing a location you can visit. Players take turns, placing their pawn on a particular scene until everyone is satisfied. If you butt heads with an enemy investigator and both intend to inspect the stables, passenger car, or taboo leather shop (sorry, I recently re-watched Se7en), then you must bid carriage tokens. Thematically, abstractly bidding kind of works because it represents arriving to the scene faster. Sure, I’ll buy what Holmes is selling.

The cards themselves will have a couple paragraphs perhaps shedding light on the mystery. Usually you will need to piece together multiple clues to make progress towards answering the questions, yet red herrings abound. The overall narrative is pretty solid, although it’s not as intriguing or layered as Sherlock Holmes: Consulting Detective.

The true identity of this game is tied up in that competitive race. You feel a real sense of pressure to not waste a single turn down the wrong dark alley or questioning a lame duck witness. Occasionally you’ll pick up a card and receive a dozen words about the poor weather, while Abigail will be narrowing her eyes attempting to decipher a bevy of clues as she writes furiously on a notepad. Dammit, Abigail.

The first person to head to Holmes’ address and answer the questions correctly outright wins. As the great Ricky Bobby said, if you’re not first you’re last. This will cause you to take chances. Maybe you’re reasonably sure of the solution but not positive. It’s quite surprising just how often people answer incorrectly in this game, eliminating them from the competition. Thankfully the game is a short 45 minutes and that dagger to the heart typically occurs with just a few remaining. 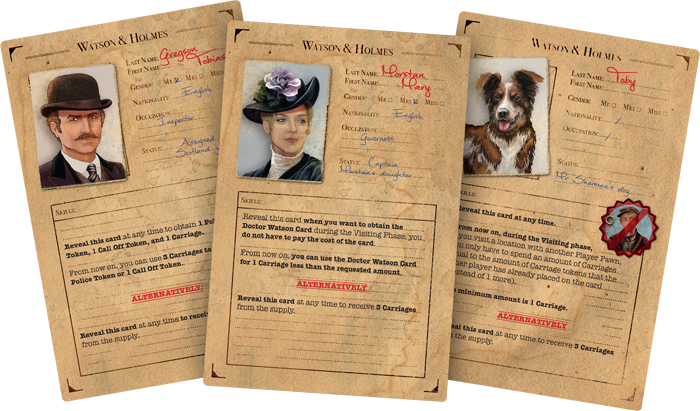 A wide variety of companions provides players with special abilities and variety.

The burning question with Watson & Holmes is whether that competitive race tied strongly to an element of deduction is actually compelling. I would say unequivocally yes. The design certainly has a different feel than Consulting Detective which means it can step out from its sibling’s shadow. It’s also much shorter which fits the rapid pace.

The flip-side of the shilling is that the tempo and hastiness also imparts a level of stress. This is not a laid-back affair where you drink brandy in the study and read a newspaper. You can misdirect and even partially block opponents with police tokens. That mean edge can be very fun, but it’s also a quality you need to be acutely aware of.

The brevity of the experience also means it’s not quite as satisfying as solving a Consulting Detective mystery. It’s still an enjoyable and even contemplative endeavor, but it has less weight and is much more direct and streamlined. As a result, this is the type of game you can play with someone who’s never heard of Catan or that French castle everyone raves about.

And that’s really the swift kick in the pants this game provides. It’s a title that offers great utility bringing joy to gamers as well as those who’ve yet to discover the hobby. It’s light enough to easily teach but it boasts depth and legitimate story. Most importantly, without fuss, it brings the fun.

Are you a fan of deduction games? Excited for Watson & Holmes? Let us know in the comments!